China wind boom to continue in 2015, but grid reform needed: report - China Dialogue
Skip to content
The boom in China’s wind production will continue this year as the country’s leaders try to reduce toxic smog in its largest cities, but lack of electricity market reform remains a major obstacle to displacing large amounts of coal from the energy mix, a major survey of the global wind energy sector said today.
The report from the Global Wind Energy Council (GWEC) said that wind power now accounts for almost 3% of China’s electricity consumption, although just over 65% of the country’s power still comes from coal.
China last year installed 23GW of wind, reaching a cumulative total of 114.6GW, up over 25% from 2013, and is the first country in the world to pass the 100 GW mark in wind capacity. Figures from the country’s national energy authority show that just under 100GW of total capacity was connected to grids by the end of last year.
But with gas the most likely to displace coal in the shorter term, China will need to deliver root-and-branch reforms of its electricity market  and state-owned grids if wind is to replace large amounts of coal as a reliable source of power.
“Lack of flexibility in the system, coupled with the lack of a real electricity market where electricity can be traded, are the key barriers for higher penetration of renewable energy in system,” said the report, which is a major reference for the wind industry worldwide.
China’s wind capacity only operated at full pelt for 1,893 hours last year, or 22% of the total operating hours, down 181 hours from 2013, partly because weather was less windy, the report said.
Although discussions are gathering pace to ensure that wind energy can generate large amounts of baseload power at times of peak demand, there is little chance of major changes soon, the report added.
Grid is the "major challenge" to wind
“The grid remains the most serious challenge facing the wind industry in China,” it said.
China failed to deliver on expectations that it would implement a Renewable Energy Portfolio Standard (RPS) in 2014, a measure which is expected to be the strongest policy measure to force grid companies to respect the Renewable Energy Law.
That law gives wind and other renewable electricity sources priority access to the grid, but state-owned grids and power companies have been slow to upgrade the infrastructure needed to take full advantage of new power lines that transport wind power from northern and western provinces such as Gansu, Xinjiang and Inner Mongolia to the country’s heavily-populated eastern seaboard.
The same law mandates that 15% of its generating capacity comes from renewable sources by 2020, a threshold that the government wants raised to 20% by 2030.
More green, less black in power system?
Despite the major challenges posed by lack of electricity market reform, the completion of several high voltage power lines will help to further reduce the amount of wind energy lost because of lack of transmission capacity, the report said.
An increasing reliance on wind assets by China’s largest state-owned power companies will also benefit the sector as old coal-fired power stations are shut down and newer ones run less often, said GWEC’s head Steve Sawyer in an interview with chinadialogue.
“Coal assets are struggling to be profitable, meaning that for SOEs, wind assets have become more valuable,” he said. 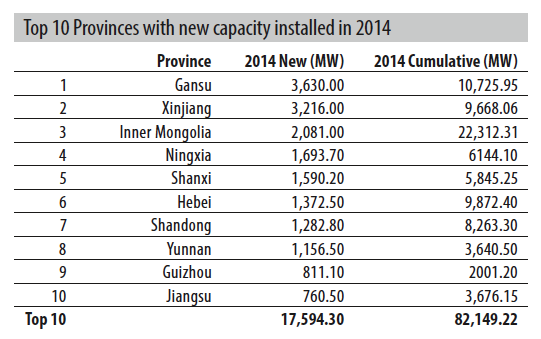 Coal curbs will mean a net gain in jobs in China: study

China can meet its new climate pledge, but only with rapid cut in coal