A pipeline stretching from central to north-east Thailand promises to “promote Thailand as an energy hub in the region” and “increase energy security”, according to the Ministry of Energy. Construction began in mid-2019, despite local communities objecting that the largely Chinese-financed project could worsen flooding and contaminate water.

The 342km pipeline will run two metres underground and link Thailand’s north-eastern province of Khon Kaen to an existing pipeline in the central province of Saraburi. Energy Minister Sonthirat Sonthijirawong attended a ceremony on 5 February to lay the foundation of a 140 million litre oil tank in Khon Kaen’s Ban Phai district at the end of the pipeline.

Altogether, it will pass through 70 towns in five provinces including Lopburi, Nakhon Ratchasima and Chaiyaphum.

The route was agreed in August 2016, when the energy ministry signed a deal with the project investor, Thai Pipeline Network (TPN).

The ministry has promoted the pipeline as a more efficient means of transporting oil to the north-east, claiming it will lower oil prices and cut down on accidents involving road tankers.

The THB9.2 billion (US$300 million) project is largely funded by a loan from the Chinese government, which stipulates that at least 35% of the equipment used must come from China. The precise details of the deal have not been made public. However, Panu revealed that TPN and undisclosed investors are investing about THB1 billion each.

The project has been progressing quickly since January last year when the government approved the environmental impact assessment (EIA) report.

In February, TPN – a subsidiary of Power Solution Technologies (PSTC) – signed a contract with China Petroleum Pipeline Engineering (CPP) to construct the pipeline within a 30-month period. And then works commenced in mid-2019.

Panu also revealed that the company wants to link the pipeline to the capital of Laos, Vientiane, and to southern China.

As well as the controversial north-eastern route, the first phase of another route, from central to north, is also under construction. The northern route is being developed with the ultimate aim of linking Tak province into Myanmar’s Kayin state at Myawaddy. 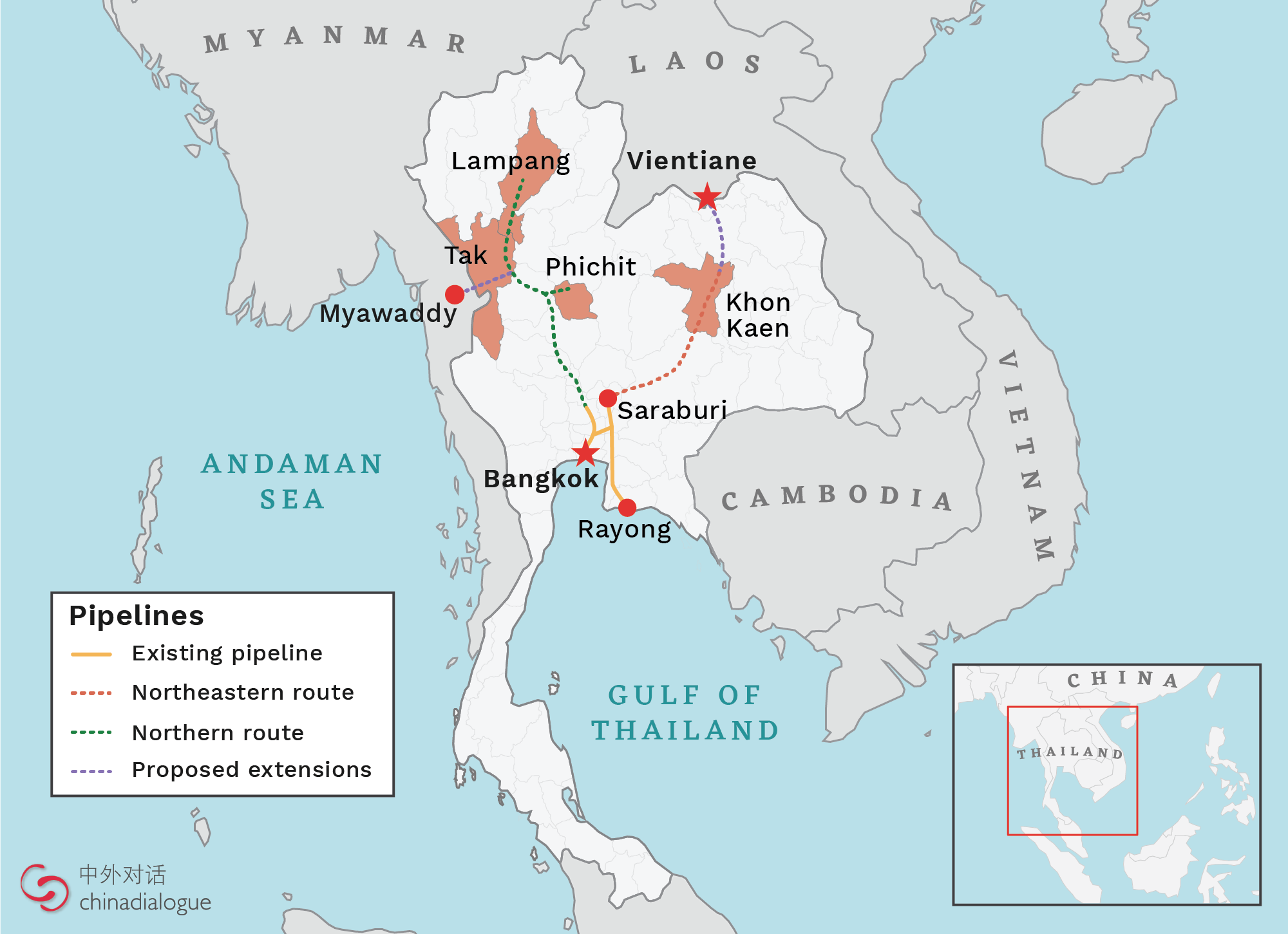 “This will lead to a big flood, bigger than the recent one,” said Ow, a local resident of Khon Kaen’s Ban Phai district, recalling flash flooding following tropical storm Podul that put homes under more than 1.5 metres of water for over a month last summer.

She fears the construction of an oil tank a few kilometres away will worsen flooding in future.

“Looking at its huge area and how high they have raised the land to level it for construction, [it] will definitely block all waterways,” she said, adding: “What will happen to us if there’s a big storm again?”

“After discussion with my neighbours, we [all] share the same concern and decided to file a complaint to the local authority but nothing happened,” said Ow.

The villagers’ concerns are justified, according to Jaroonpit Moonsarn, an environmental official at the Department of Environmental Quality Promotion (DEQP).

“There are two creeks, the Huay Bandoo and the Huay Khamrian, in the area that are natural waterways helping to drain waters in the district. The construction has blocked these significant waterways,” said Jaroonpit.

She believes another tropical storm in the area would create a bigger flood than the one last August.

Flooding is tomorrow’s fear, but dust is today’s suffering, said Ow, referring to air pollution caused by the construction of the oil tank that is affecting surrounding communities.

“We filed a complaint to the construction company, but they told us to complain and seek compensation from their subcontractors. It’s still unresolved. We don’t know who to talk to,” she said.

Jaroonpit also noted local concerns about the project once it’s finished, such as explosions, chemical contamination of local groundwater and heavy traffic. Road tankers will still be needed to distribute oil from the pipeline to nearby provinces, and additional tankers are expected to operate if the road to Laos is improved.

“Public safety should be seriously studied and discussed, including how to manage such risks and how to compensate,” she said.

“This involves the daily life of local people and they should have been informed clearly before the project’s construction approval, otherwise it leaves all the burden on them,” said Thawisan Lonanurak, former secretary general of the North-eastern Chamber of Commerce.

Apart from the risks to public safety, there are several basic questions about the project that need answering, according to Thawisan.

“Will oil prices in this area really be cheaper? How cheap? And most important, how transparent is the deal between the state and private investor?” Thawisan said.

“These questions should be answered at least during the EIA and hearing process, but it hasn’t happened,” he added.​

Witoon Kamonnarumet, senior advisor to the Khon Kaen Federation of Industry, said hearings for the EIA were conducted twice among a small group of people selected by the project owner and the company contracted to produce the EIA. They were not open to the general public.

“Even local businessmen in my network said they know very little about this project and are not clear on what it will really look like. We heard it would come two years ago and then there was a long silence and then construction started recently,” Witoon said.

“At the EIA hearing, most of the time was used for a company presentation focusing on what they had done in other areas,” said Paitoon Mahachuenjai, Nakhon Ratchasima’s Dan Khun Thod District head. They said that if there was “any problem during construction they would be ready to help,” he added.

Local activist Suwit Kularbwong, chairman of the Human Rights and Environment Association, said communities affected by the project have limited access to information about it.

“Where will the pipeline pass through exactly? How much area will be expropriated or compensated, and at what rate? They still don’t know. This goes against the [country’s] 2017 Constitution on public information and public participation for such a project,” Suwit said.

“This project has been initiated by the state and developed with a top-down approach, without sufficient consideration of its impacts, and with poor public participation. What will happen if more and more people along the pipeline know about the real impacts after construction and learn that they were not informed beforehand? Local opposition is foreseen. And government should be aware of this as it could affect the ongoing construction of the project,” he said.

Suwit said there is inadequate public awareness and discussion about projects and Chinese investment.

“The influence of Chinese investment in this region as well as the Mekong has been growing rapidly in recent years, without taking human rights violations and environmental impacts into account. And [it’s been] actively supported and facilitated by our Thai government.

“The key question is how ready are we for such massive investment from China? How ready is our government to protect its people’s interests from developments like this one where they are losing their land?” asked Suwit.

To address public concerns, Suwit suggested open public forums so that discussion could take place on the controversial oil pipeline and broader development plans for the north-eastern region.

“That which is missing from the past EIA process should be fixed there. At the forum, all basic project information should be available beforehand. It should be open to participation and discussion from all groups,” Suwit said.

Thawisan shared the same suggestion. “Local universities and academics should also play an important role to help digest technical and academic information for local people to understand the project properly,” he said.

China Development Bank could be a climate bank