On 6 November, the Mekong River Commission acknowledged that climate change had exacerbated this year’s wildly varying water levels on the Mekong – which saw the mighty river reduced to a trickle in parts, even during the rainy season. But the main contributor, it said, was dam construction. The intergovernmental body added that the river needed better data-sharing between countries, as it reported on a consultation for Laos’ Luang Prabang hydropower project, one of a cascade of highly controversial hydropower projects in planning, construction or operation in the country.

Managing water in Southeast Asia has always been contentious, but never more than today. The geopolitical impediments to regional cooperation are difficult enough, particularly with China – the powerful upstream neighbour for all of mainland Southeast Asia’s rivers – having already built at least 10 dams on the Mekong mainstream. But climate looks to be a “threat multiplier” across the region – a wild card that exacerbates a number of existing problems on regional watercourses, from sediment loss to salinity and erosion.

The implications of these overlapping stresses for food, energy and human security are increasingly clear, but its implications for human rights are perhaps less explored. Yet the right to safe water, as I explain in a new report with Dr Mohamad Mova Al’Afghani, is fundamental to leading a life with dignity – and a foundation for achieving many other internationally recognised human rights, such as the rights to life, work, and adequate housing. Yet approximately 844 million people live without access to safe water worldwide, of whom around 110 million live in Southeast Asia.

In 2012, the ASEAN (Association of Southeast Asian Nations) Human Rights Declaration explicitly guaranteed “the right to safe drinking water and sanitation”, but few ASEAN member states include the right to water in law. Many have severe problems with water services provision, sanitation, climate adaptation and pollution, with untreated wastewater, solid waste, pesticides and heavy metals being released into water supplies. Rising populations, urbanisation, rapid industrialisation and climate change all compound these threats.

In many places, water services provision is inadequate and unequal, with disparity of access between urban and rural areas. Water privatisation has, in some cases, contributed to poor coverage and high prices. Take Indonesia: urban populations there are estimated to grow annually by 2.21% to 2021, as the rural population shrinks by 0.13%. In 1997, the British and French companies Thames Water and Suez signed a 25-year public-private partnership (PPP) contract to deliver the water supply for the capital, Jakarta.

Only 42% of its residents had access to piped water in 1997, and many of them still relied in part on bottled water or groundwater – a major reason why the city is sinking today. The project promised that by 2002, 70% of Jakarta’s population would have piped water; the target for 2017 was 98%. Instead, coverage stood at around 50% by 2002 and 59.4% last year. 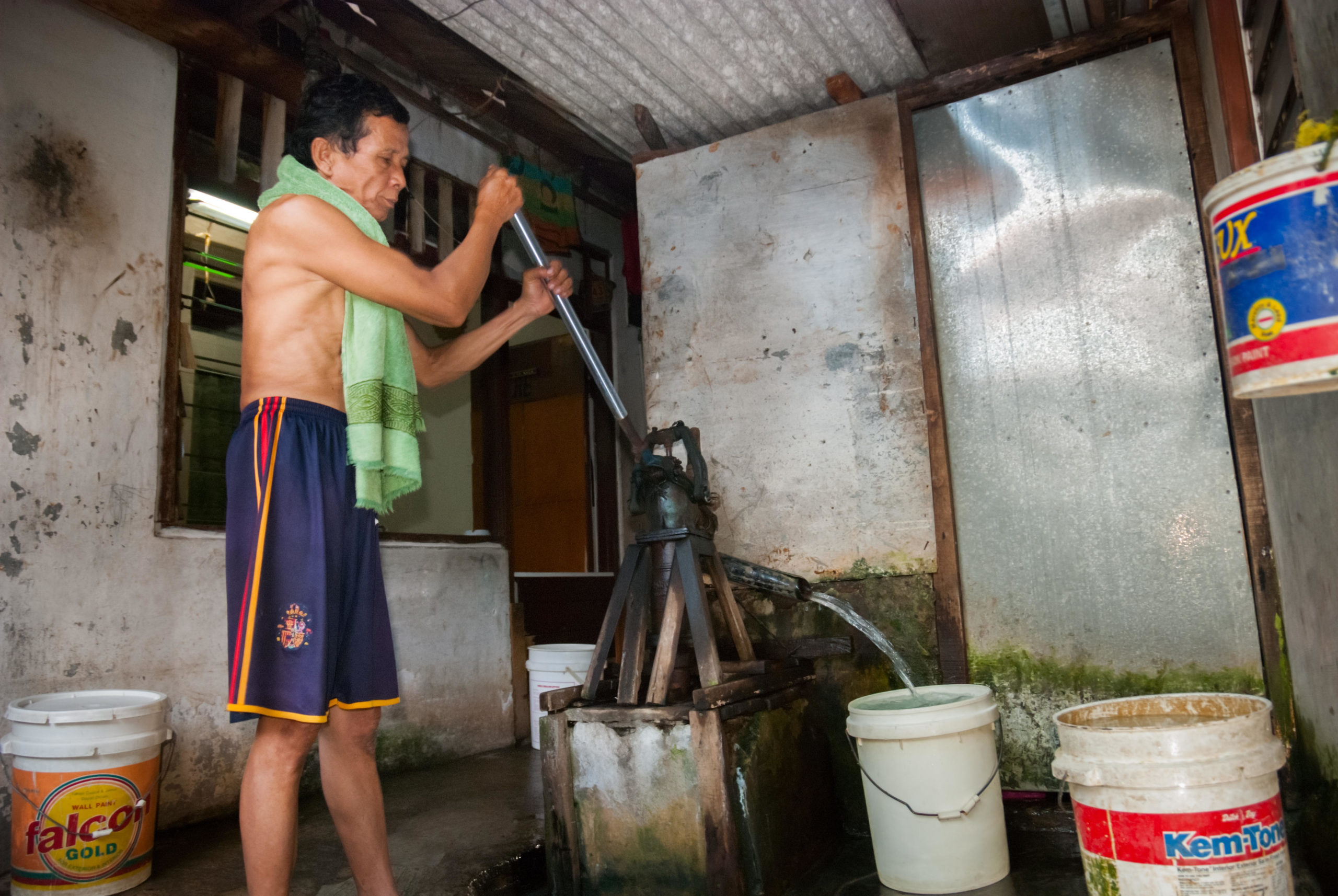 A resident of a dense neighbourhood in Jakarta pumps water from a communal well (Image: Alamy)

Furthermore, the price of water has been stubbornly high. Despite an extensive campaign to annul the PPP contract, it remains in force and adds to the public debt.

By contrast, public water provision in Surabaya, the second largest city in Indonesia, through a company owned and operated by the city government, has been a success – with water supply reaching 95.5% of the population by 2016. The Amrta Institute has calculated that the average price of water in Surabaya is one-third that in Jakarta.

Singapore, too, is often cited as a best practice case for urban water services. Its entire water cycle is managed by the municipally owned Public Utilities Board, including sewerage and drainage, allowing for more integrated water policymaking. Today, 100% of Singapore’s population has access to drinking water and sanitation; all wastewater is collected and treated; and the entire water supply system, from water works to consumers, is metered.

In much of Southeast Asia, however, sanitation is under-financed and provided unequally. In Cambodia’s urban areas, universal access to sanitation among the richest compares to only 53% of the poorest quintile having access to what is known in public health jargon as “improved sanitation” (36% to private toilets, 17% to shared facilities). In addition, while access to improved sanitation is estimated at 100% for the capital Phnom Penh, it is only 75% in other cities.

Water quality in Southeast Asia is under threat from many sectors including agriculture, manufacturing and waste management, due to insufficient wastewater treatment, chemical overuse and other factors. Toxic contaminants in water are linked to various cancers, behavioural and learning disabilities, birth defects and diabetes, among many other adverse health impacts.

Mining is a particular problem: this year, the UN brought attention to claims that the government of the Philippines has failed to protect the right to water for indigenous peoples and local communities around Didipio, in northeastern Luzon. A gold and copper mine there, operated by the Canadian-Australian OceanaGold Corporation, forcibly evicted hundreds of families and reportedly used security forces to protect its operation.

Studies show the mine has had a big environmental toll, including heavy metal contamination in the Didipio river, on which communities rely for drinking and irrigation.

In June, the company’s permit for the mine expired. But the company kept mining – claiming it had sought renewal of its permit – in contravention of local and provincial resolutions ordering the firm to cease operations. Since 1 July, Didipio residents, led by indigenous peoples, have blockaded the mine, forcing a suspension, though the company continues to process ore. 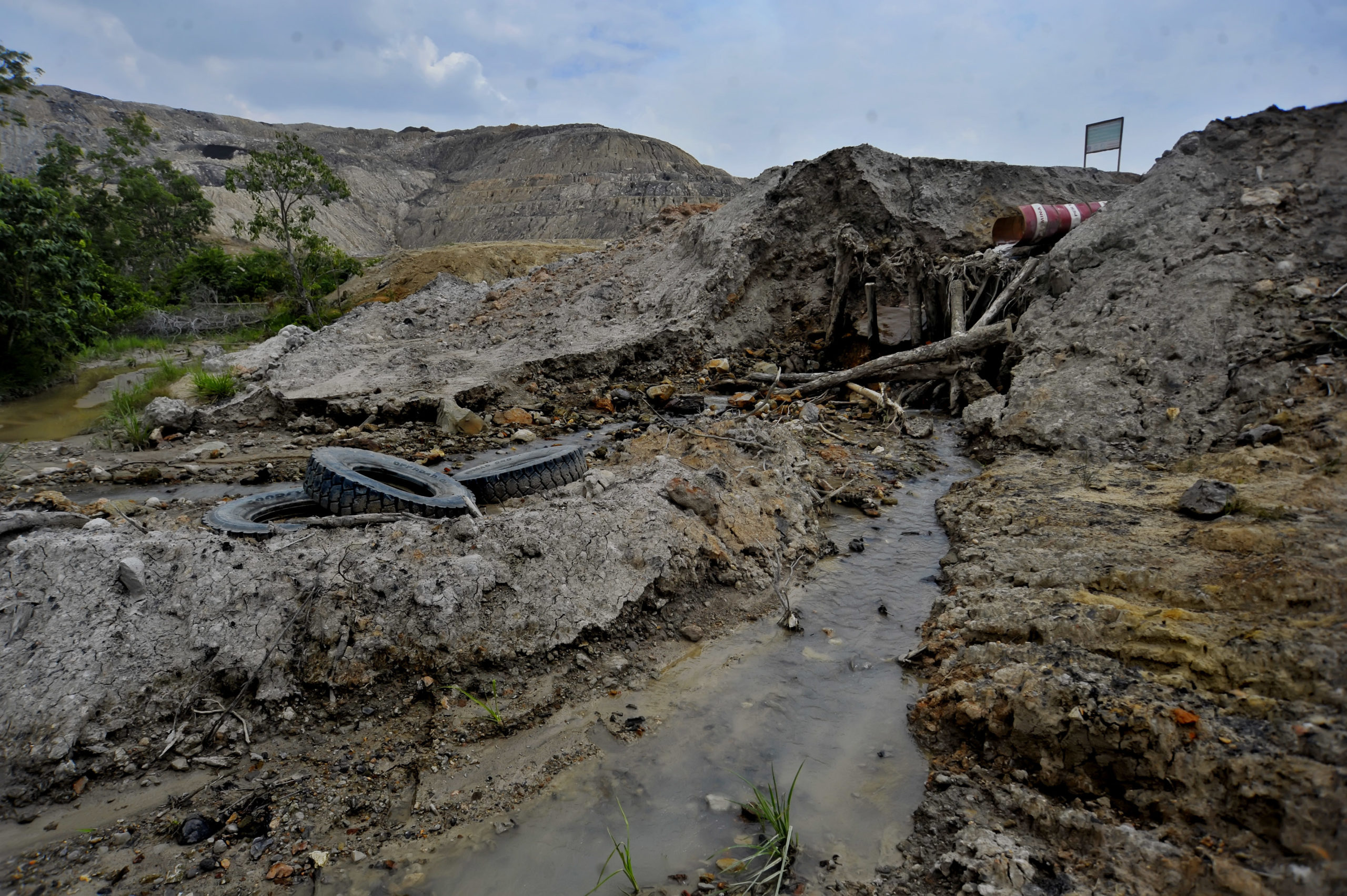 Groundwater running through a coal mine in South Kalimantan, Indonesia (Image: Greenpeace)

As these examples make clear, water is not only contentious but also intimately bound up with human rights. Climate change only compounds this predicament and forces the need for adaptation. Many countries in Southeast Asia are highly vulnerable to disaster risks, and exposed to sea-level rise and changing cyclone activity. The Himalayan glaciers are warming far faster than average, making transboundary water governance and large hydropower projects all the more potentially troublesome.

Still, there are also reasons for hope: the World Risk Report, for example, ranks Singapore as one of the most disaster-prepared countries. While rising seas and extreme weather pose serious threats to the city state, Singapore is employing a nature-based solution – by preserving its mangroves for coastal resilience – as well as employing demand-management initiatives in its municipal water management.

Similar approaches in delta regions may point to a way forward: in Vietnam, agricultural experimenters have created a stable, “closed-loop” ecological system producing fruit, fish, vegetables and sought-after edible snails without the use of pesticides, fertilisers and antibiotics; and in northeastern Thailand, irrigation projects have been designed to preserve wetlands and expand educational eco-tourism.

But such efforts should also be underpinned by government recognition and support of the right to safe water – as well as businesses taking responsibility for disclosing, avoiding and remedying their own impacts on water systems. The region also needs stronger health protection standards for water contaminants; a greater role for national human rights institutions in ensuring the right to water; and full public participation and access to information regarding water pollution, sanitation and water services.

With ever greater environmental uncertainty shaping the future of the region’s watercourses, some unity of purpose – around protecting the rights of people to safe water – could be an important step forward.