Developing countries are forecast to emit more carbon dioxide than developed ones by mid-century. Chinese investment is projected to speed up that process in key countries linked to the Belt and Road Initiative (BRI), China’s global infrastructure plan, according to a new report.

The study, authored by researchers at Tsinghua University, Vivid Economics, and ClimateWorks Foundation, provides the first model of how carbon emissions will grow for BRI countries, and incorporates the effect of Chinese investment.

By 2050, the annual emissions of the BRI countries studied will far exceed the target levels for complying with the Paris climate agreement to keep global warming below 2C, they find.

This is projected to be the case even if the countries develop in line with the lowest carbon pathways in history. But Chinese investments are in fact driving BRI countries down higher carbon routes.

The 17 key Belt and Road countries were chosen based on four factors – GDP, population, geographical and political proximity to China, and recent significant investment from China

In the coming decades, BRI countries will contribute a much larger share of global emissions, the study finds.

“From a forward-looking perspective,” write the authors, “the biggest climate risk and opportunity lies in our ability to support a low-carbon development pathway for the group of more than 120 nations”.

Considering historical precedents, in the 17 key countries studied carbon emissions are forecast to grow from 14% of the global annual total in 2015 to 44% in 2050, if the rest of the world follows the 2C pathway established in Paris. According to the report, these countries account for almost half of the total emissions from BRI countries.

For the greater group of 126 countries signed onto the BRI, emissions are projected to grow from 28% in 2015 to 66% in 2050. If they follow the most carbon-intensive growth paths in history, these countries could bring about 2.7C of warming even if the rest of the world meets the 2C target.

“What this report highlights loud and clear,” said Elizabeth Losos, a senior fellow at Duke University, “is if we don’t really start taking this into account both from the side of China as a lender but also the countries as recipients, we are going to bust through 2C.”

Is Chinese investment to blame?

These emissions trajectories are based on projected economic growth, modelled to include Belt and Road investments. Though the study does not attribute a certain percentage of emissions growth to those investments, it does imply they will play a role in the countries’ emissions increases.

The authors explain that most Belt and Road countries are at an early stage of development in which economic growth has a particularly large effect on energy demand, and therefore carbon emissions. In the 17 key countries studied, they find that Chinese investment will increase GDP by 0.24% annually through to 2030. This GDP bump is “relatively modest” according to the authors, but it will still impact energy demand, particularly in developing countries where BRI investment is high.

The nature of BRI investments means they will also have an outsize effect on emissions, according to the report. Roads, power plants and other major power and transportation infrastructure projects make up the bulk of them, and these projects are carbon-intensive by nature. Every dollar invested in infrastructure is more significant than other kinds of investment from a carbon perspective. And because infrastructure lasts decades, these investments will have a strong influence on countries’ emissions trajectories.

For power sector investments, the report explicitly states that Chinese investments – dominated by coal power – are not aligned with a 2C path, but rather are set to follow a “business as usual” path. This finding, which draws on Belt and Road-wide projects found in an American Enterprise Institute database, is supported by other research showing that China’s continued investment in overseas coal projects is not in line with the Paris Agreement. 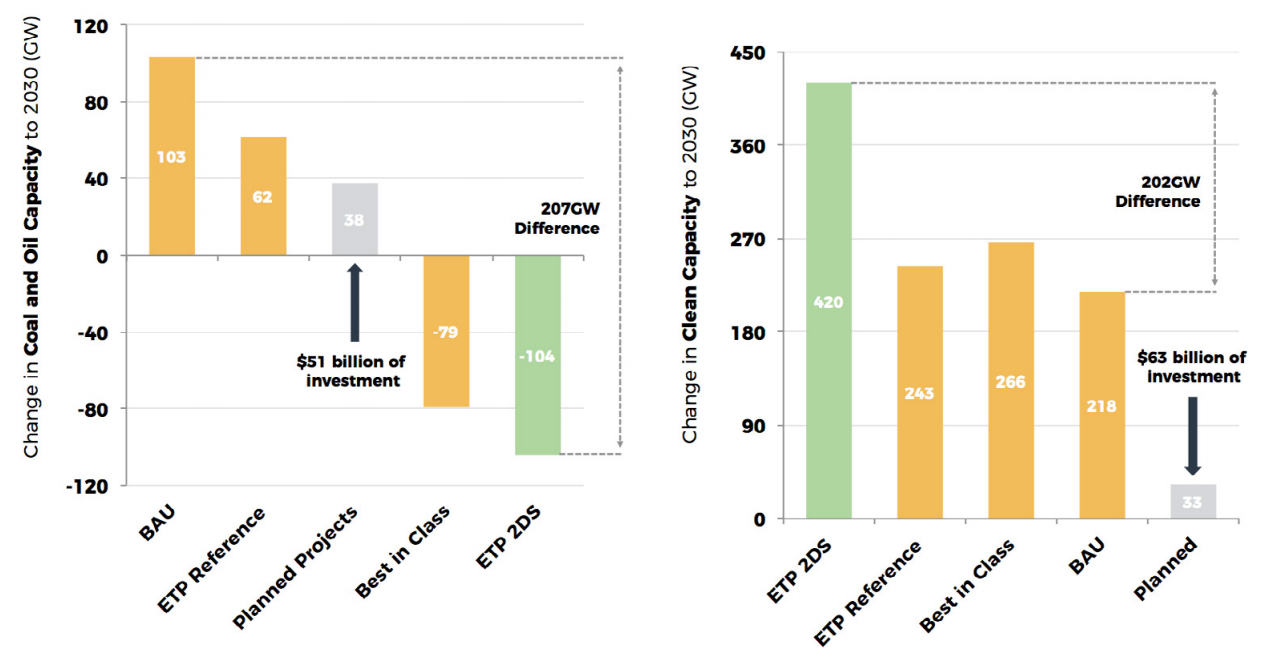 Note: This figure is focussed on the 17 key Belt and Road countries; the ETP (Energy Technology Pathway) Reference scenario takes into account commitments by countries to limit emissions and improve energy efficiency; the BAU (business as usual) scenario applies average historical growth paths to the 17 key countries; the Best in Class scenario applies the most carbon efficient historical growth paths; clean capacity is defined as generation which is net zero-carbon and includes biomass and carbon capture and storage; the Planned Projects figures are based on investment in the entire set of 126 BRI countries; other figures consider only the 17 key B&RCs.
Source: Vivid Economics, Tsinghua CFD, Hayward & Graham (2017), IEA (2015)

Triage for Belt and Road emissions

If a 2C path is to be realised, the report identifies a green investment gap totalling nearly US$12 trillion across Belt and Road countries by 2030.

The authors argue that systematic green finance policies will be essential due to the unprecedented emissions reductions required. “The nature of the carbon challenge in the Belt and Road means that delivering a 2C development path will require decarbonisation trajectories which have never been seen before in history.”

Bolstering local green finance capacity will be essential, the report says. Outside capital will not be able to meet demand for green investments, so financial institutions in the BRI will play a major role in determining their carbon path.

However, working on a country level “will not make the changes that are needed in the time required,” said Simon Zadek, one of the report’s lead authors and a senior visiting fellow at Tsinghua University.

“A Beijing policy position that is aligned with their international climate position” is needed, he said.

Although the study does not state how much of projected carbon emissions are due to Belt and Road investment, it highlights that Chinese investment will play a larger role in dictating the course of some BRI countries than of others.

In countries where Chinese investment accounts for a large share of the total and emissions are or will be high, the authors argue that the BRI has “significant potential for greening”. Eight of the 17 countries fall in this “sweet spot”, with Ukraine and Pakistan topping the list in terms of the proportion of total investment from China.

Note: Russia is omitted from the chart due to extremely high CO2 emissions relative to the other countries of interest. BRI investment is roughly a 4% share of total GCF (gross capital formation) to 2030 in Russia, and so Russia does not fall within the set of “sweet spot” countries.
Source: Tsinghua CFD, IEA (2018a)

The authors argue that China should “extend [its] green requirements to its investment in the Belt and Road Initiative​”.

Rhetorically, China has already outlined a vision for a “Green Belt and Road”, and recently upped its commitment at the Second Belt and Road Forum, announcing a new international coalition to enhance the sustainability of the initiative.

Yan Wang, a Greenpeace campaigner who works on issues related to the BRI, said clear action is needed: “Solutions include a clear-cut ‘no’ to overseas coal plants (especially those with high environmental, social concerns and low financial viability), alternatively switching to renewables and cultivating the market.”

Losos said, “You can go straight back to the proclamations of the second BRI forum and the very laudable goals. It is now incumbent on China to uphold the commitments that they have made.”