China has been leading the world in the expansion of solar and wind power capacity in recent years. By the end of 2018, China’s solar capacity of 174 gigawatts and wind capacity of 184 gigawatts accounted for 36% and 32% of the global totals for each respective technology. Almost all of the capacity was developed by Chinese companies, with foreign investors owning less than 1% of it.

The US-China trade war has increased the risks of investing in China’s power sector. Some US investors like I Squared Capital are trying to divest their Chinese power assets. Nonetheless, other foreign investors (including independent power producers, institutional investors, private equity firms and oil majors) have expressed strong interest in Chinese renewables projects. This is partly driven by credit tightening in China and the push to lower the debt-to-equity ratio (gearing rate) of the domestic state-owned power companies.

In January, the National Development and Reform Commission (NDRC) and the National Energy Administration (NEA) laid out plans to drive the development of subsidy-free wind and solar farms across China. As the cost of such installations falls, bringing them closer to the price of coal power, which is set by the government, more foreign players will be tempted to enter the sector. While cautious, these investors see opportunities in China’s greater willingness to improve market transparency and treat them as equals with state-owned power companies.

Back in the 1980s and 90s, many foreign investors entered the Chinese power sector in joint ventures with domestic companies. By 1997, there were at least 40 foreign companies invested, owning over 10% of the total capacity of about 254 gigawatts. Most of the investment was in greenfield coal plants, driven by provincial governments eager to power rapid economic growth.

However, most foreign companies exited the Chinese market in the late 1990s and 2000s. This was partly because of perceived unfair treatment in the power dispatch process during 1997-2002 when China had a power oversupply. Foreign investors believed that power from the vertically-integrated National Power Corp was favoured over power from their plants. Furthermore, by setting prices for electricity through rigid tariffs, the regime did not respond well to fluctuations in coal prices. This meant that foreign investors had to bear the risk of coal price rises.

Lately there seems to be a revival of interest in the Chinese electricity market. The focus this time is mainly on the renewables sector – solar, wind, small hydropower and battery storage. Large international energy companies, such as Total and Engie, have set up small teams to understand and closely track the development of the renewables sector. Infrastructure fund houses (especially those from Hong Kong, Europe and Canada) are also looking for opportunities to invest in renewables assets in mainland China.

Improved regulatory conditions in China’s electricity market have addressed some of the issues that have made foreign investors hesitate. While data such as monthly demand, supply and prices have been released by the government to improve market transparency, the power dispatch process remains opaque, with no data being released on a plant-by-plant basis even when existing investors ask for it.

Without access to such information, foreign investors will be concerned about state-owned energy assets getting preferential treatment, especially during the dispatch process in an oversupplied market.

China did partially address these concerns in 2002 when it split up National Power Corp into two network companies and five state-owned power companies.

Market reform has continued, with the government adopting an internationally recognised “regulated asset” principle that sets the transmission and distribution tariff, and how much grid companies can charge users. This has reduced the incentive for grid companies to take power from coal plants before solar and wind. Furthermore, several provinces, such as Guangdong and Zhejiang, are in the process of creating competitive electricity spot markets similar to those in the US or Australia. Trading in real-time gives intermittent, fuel-free renewables an edge over electricity from fossil fuels.

There is hope that these reforms will make the market the driving force behind power dispatch.

A history of Chinese power 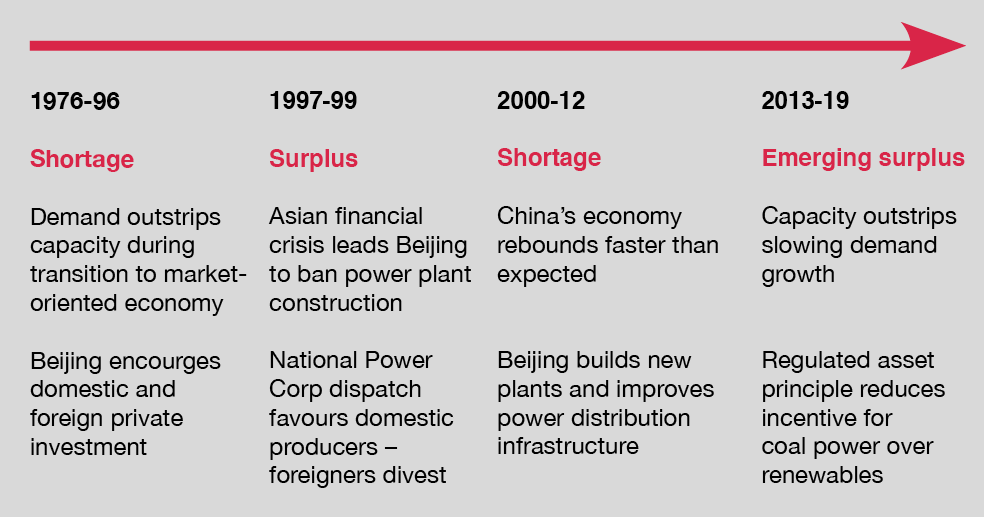 Regional variations in China’s power sector are also part of the picture being eyed by investors.

Within the North China Grid (Western Inner Mongolia, Beijing, Tianjin, Hebei, Shanxi and Shandong), the construction of multiple ultra-high voltage transmission lines will integrate power supply and demand between provinces. This will enable large amounts of power to be exported from places such as West Inner Mongolia, Shanxi and north Hebei, to the high-demand centres of Beijing, Tianjin and Shandong.

Furthermore, the push to retire coal plants and increase the share of “clean” energy is very strong in northern China, after years of severe air pollution. This has created a good macro environment for renewable energy investment.

However, conditions in north-west China (i.e. Xinjiang, Gansu, Qinghai and Ningxia) remain challenging as it is so far away from the load centres in coastal provinces and there are still large power surpluses in the region. Even if more renewables can be exported by additional ultra-high voltage lines, developers will likely have to sell their energy for less than coal.

Overall, due to the rapid fall in the cost of producing solar and wind power, delayed payment of subsidies will no longer be an issue because solar and wind won't need subsidies to be competitive. As technologies improve, the opportunities to invest in non-subsidised renewables will grow.