Southeast Asia’s energy demand is expected to grow by two-thirds by 2040, requiring massive investment in new energy generation and transmission. Installed capacity will double from 240 gigawatts to 565 gigawatts, which amounts to adding a bit more than Japan’s total electricity capacity.

To meet their growing needs, countries have to make pivotal choices. They will either lock the region into a carbon-intensive energy future or open up a more sustainable, flexible path based on renewables and energy trading. Outside investors – in particular China – will play a key role in the outcome.

Some of the region’s poorest developing countries face the greatest pressures. Myanmar, Cambodia and Laos can expect their energy demand to grow every year by double digits. Indonesia, the Philippines and Vietnam project 6-10% annual growth rates.

Coal dominates power generation in the region. Under a business-as-usual scenario, the future energy mix would see coal use expand. A 2018 report by CoalSwarm shows that five of ASEAN’s 10 member states – Vietnam, Indonesia, the Philippines, Thailand, and Cambodia – are among the world’s top 20 investors in new coal capacity.

Vietnam plans to increase coal generation five-fold, from just over 10 gigawatts in 2014 to over 55 gigawatts by 2030, an increase equal to Thailand’s entire 2017 electricity supply.

The International Energy Agency thinks US$2.7 trillion will be needed for energy supply, transmission and efficiency measures to meet regional projections. Total investment in generation will depend on the energy mix as costs differ for different production methods.

The region’s preference for coal runs counter to the global trend and risks derailing international commitments to cut carbon emissions. Globally, demand is dropping because of environmental concerns and the related risk of coal plants turning into economic sinkholes as prices shift.

However, Southeast Asia has locally available coal supplies and outside investors are advocating the use of so-called “clean” supercritical and ultra-supercritical coal technology. Chinese state-owned enterprises are notable for pushing coal investments, despite official government rhetoric about being a sustainability leader.

China’s role cannot be overstated: China is involved in funding or building nearly a quarter of all energy projects in mainland Southeast Asia, but invests in or constructs more than 43% of all coal projects.

The two emerging alternatives to coal are imported liquefied natural gas (LNG) and renewable energy. Global investment in new energy capacity has shifted away from oil and coal and towards renewables and natural gas.

Myanmar, Indonesia, Malaysia, Thailand and Vietnam have all exploited domestic natural gas resources for decades. However, the region’s natural gas reserves cannot meet projected electricity demand growth. Asia already consumes half of the global gas supply; the IEA forecasts this will rise to two-thirds by 2040.

Fortunately, the globalisation of natural gas markets and the US shale gas boom provide economically attractive alternatives. Investors in Thailand, Vietnam, Indonesia, Myanmar and the Philippines are all exploring LNG import terminals.

ASEAN has set an ambitious, shared target for renewables to form 23% of the energy mix by 2025, though it is doubtful it will be met as the block’s developing countries lag behind others in deploying large-scale alternative energy projects.

With the exception of Thailand, which is more than halfway to its targets for installed solar capacity for 2030, most ASEAN countries are still developing national targets and policies for solar and wind power. Although Indonesia and the Philippines have the world’s second and third largest installed geothermal capacity and additional unexploited reserves, new investment has been slow. 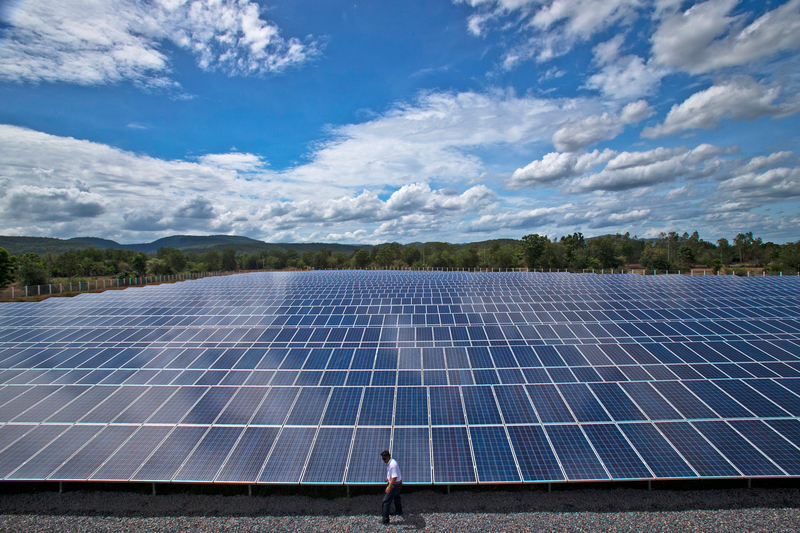 Interviews with energy planners across ASEAN indicate a widespread belief that coal is a reliable baseload that is more affordable than the alternatives, a perception that has created policy gaps.

The investment environment for renewables is unnecessarily high-risk because ASEAN governments' work on supporting renewables and integrating them into the grid is insufficient. As a result, record low prices seen elsewhere around the world have yet to reach Southeast Asian markets.

Since 2009, commercial-scale solar power has dropped approximately 86% in price and wind has dropped 65%, making both competitive with traditional generation sources in many places.

The biggest price falls have happened since 2016 – driven downward by China’s overcapacity in solar production, competitive auctions for new projects, and a shift in financing and regulatory models. Bloomberg New Energy Finance forecasts additional price cuts of 34% in 2018 and more in 2019 as China’s domestic demand slows and oversupply floods the global market.

Time to catch up

Most national energy plans were developed before the magnitude of the price cuts was common knowledge and when there was still a strong sense that low prices were only attainable with subsidies.

For instance, Cambodia’s Master Energy Plan was finalised in early 2017 and included no solar energy. By mid-2017, investor interest had exploded, forcing energy planners to indicate that the next energy plan would incorporate solar energy.

Many ASEAN countries do not yet have clear policies. Thailand, Malaysia, Vietnam and Indonesia have adopted feed-in-tariffs (FiTs) for solar or wind projects, but results are mixed as there is a lack of clarity on other regulatory issues, ranging from permits to the terms of power purchase agreements for solar, wind and biomass technologies.

The IEA believes that most of the estimated US$2.7 trillion of investment is needed for transmission infrastructure, a topic that is easily overlooked in debates about the choice of power sources.

About 10% of ASEAN’s population still lacks reliable access to electricity. Investment in traditional power grids to support energy trade and distributed micro-grids located in remote communities will be key to meeting their needs.

Leaders first mooted a regional ASEAN power grid for energy security in 1997. It has not yet been developed. There are no transmission lines for large-scale multi-national energy trade. Bilateral energy trade is common but multilateral energy trade has largely been stymied by anxieties about protection of domestic energy industries, differences in electricity prices, and contractual problems.

The ASEAN Plan of Action for Energy Cooperation has set a target of getting three multilateral energy trade schemes operational by 2020. China also supports regional energy trade, as a regional grid could allow for excess hydropower from Yunnan province to reach foreign markets.

Despite investor interest, progress has been slow. By 2018, only one example of multilateral trade between Laos, Thailand, and Malaysia had moved forward. The political difficulties are unlikely to be addressed until the economics of trade become too attractive to be ignored.

Upcoming policy revisions provide opportunities for countries in the region to benefit from falling prices for renewables, though it is far from certain they will do so. National energy plans are currently being updated in Thailand, Vietnam, Cambodia, Myanmar and Laos. Most other ASEAN members will be reviewing their plans after 2020.

There are some signs that ASEAN countries are responding to global energy market shifts. Thailand has recently raised its renewable energy target from 20% to 30%  following some government successes in encouraging solar investment. Cambodia, Indonesia, Malaysia and the Philippines are moving from feed-in-tariffs to competitive auctions for renewable energy projects.

The transition could gather pace as policymakers wake up to the evolving economics and shifting risk. Any new consideration of commercial-scale renewables, smart grid and distributed generation technologies, and energy trade presents an opportunity to outside investors, especially from China.

If they continue their current preference for coal plants, the prospects for the climate will be bleaker.

After China’s ministerial shake-up, what’s next for South-South climate cooperation?