Current emissions reduction plans will lead to an average global temperature rise of 2.4–2.6C by 2100, far above the 1.5–2C limit agreed upon by governments in Paris seven years ago, according to the UN Environment Programme (UNEP).

A new report by UNEP outlines its annual assessment of commitments made by governments towards meeting the 2015 Paris Agreement. These “nationally determined contributions” (NDCs) spell out each country’s emissions reduction targets and how they intend to achieve them. The plans remain “woefully inadequate”, it concluded.

Fourteen countries have submitted new or updated NDCs since the last UN climate talks at COP26 in Glasgow 12 months ago, in addition to the 152 that did so in the months preceding that event. Relative to the first round of NDCs, a larger share of plans included targets to cut greenhouse gas emissions and a greater number of economic sectors and greenhouse gases were included, UNEP said.

However, measures in these documents remove only 0.5 gigatonnes of CO2 equivalent – less than 1% – from projected global emissions in 2030, UNEP’s assessment found. This progress resulted mainly from the updated plans submitted by Australia, Brazil, Indonesia and South Korea, it said. International climate scientists have stipulated that a 45% cut is needed to reach the 1.5C target, while a 30% cut would leave us with 2C average warming.

If all NDC commitments made by countries that don’t require extra finance or technology support are implemented, then warming can be limited to around 2.6C by 2100, UNEP said. This can be reduced to 2.4C if less developed nations’ NDCs are implemented too. These are often conditional on receiving support from richer countries.

Current policies alone would lead to a 2.8C rise in global average temperature, which UNEP said highlights the implications of the gap between promises and action. 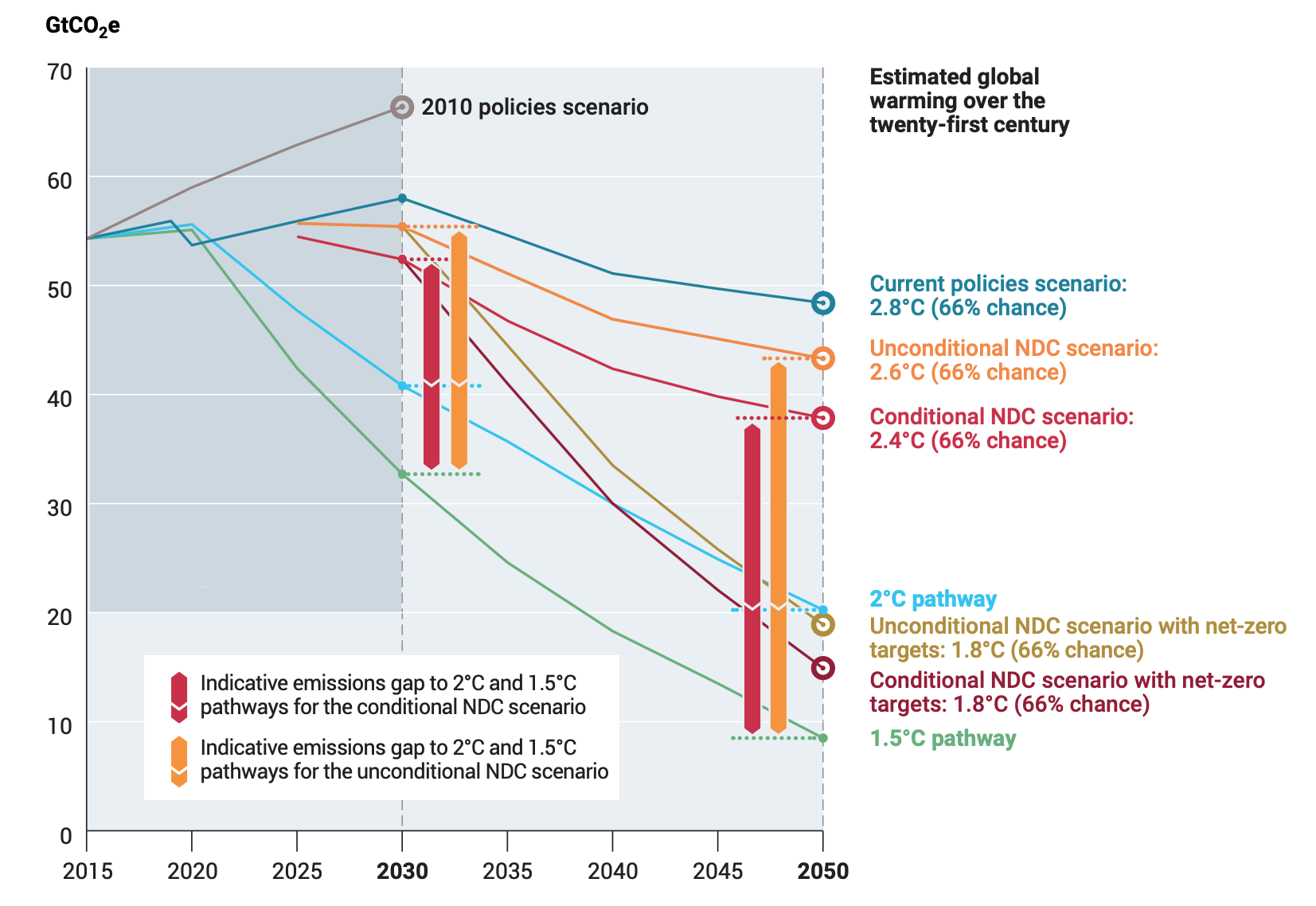 Richer nations in the G20 group, which are responsible for 75% of global emissions, are not on track to achieve targets set in their new or updated NDCs, UNEP said. Most have only just begun to implement their plans, and need to put in place additional policies, it added.

In a best-case scenario, full implementation of both unconditional NDCs and high-level commitments to achieve a net zero economy by 2050 will keep warming within a 1.8C rise, UNEP added. It did not believe that this scenario was currently credible due to the discrepancy between current emissions, short-term NDC targets and long-term net-zero targets.

A separate report published by the UN Framework Convention on Climate Change (UNFCCC), which runs the UN’s climate action including the international negotiations, mirrored UNEP’s conclusions. Its report analyses the impacts of measures contained in NDCs and highlights trends in climate action.

It found that the combined effects of measures in NDCs would increase emissions by 10.6% by 2030, compared to 2010. This is an improvement on last year’s assessment, which estimated a rise of 13.7%.

Last year’s conclusion was that emissions would continue to increase beyond 2030. This was no longer the case, the report said. However it cautioned that emissions are still not demonstrating the rapid downward trend science says is necessary this decade.

Almost all of the NDCs outlined energy supply, transport, buildings, industry, agriculture, land use change and waste as areas for emissions reduction. NDCs proposing action to decarbonise industry were less common than those for other areas, despite being the second largest source of global greenhouse gas emissions with the second highest annual emissions growth rate.

The most frequently mentioned measures to reduce emissions were renewable energy generation (88%), with the share of NDCs indicating this option sharply increasing since previous NDCs from 59 to 91%. This was followed by improving the energy efficiency of buildings (70%), and afforestation, reforestation and revegetation (54%).

Around half the NDCs considered the benefits of certain measures for both adaptation and mitigation. For example, afforestation and reforestation both absorb carbon dioxide and prevent flooding and soil erosion. Other cross-cutting actions proposed in NDCs included reducing food waste, vertical farming, nature-based solutions and moving to a more circular economy to reduce waste.

Of the countries that submitted new or updated NDCs since the climate talks in Glasgow last year, there was a rise in the number proposing measures to phase down unabated coal power generation and phase out inefficient fossil fuel subsidies, which countries agreed to do in the Glasgow Climate Pact.

Tom Evans, policy advisor on the geopolitics, climate diplomacy and security programme at think tank E3G said it was important that some NDCs reflected the pact’s commitments, but what really mattered was how the real economy shifted to drive transformations at pace.

“It’s clear that’s not happening fast enough to limit warming to 1.5C. Political signals from governments are one thing, but it’s another to unlock the crucial finance needed to actually accelerate the implementation of those goals. This must be a crucial area of attention from governments at COP27,” he said.

Evans pointed to a separate report released in the run-up to COP27, which concluded that action on the ground was far too slow. A global coal phase out needs to happen six times as fast, while public financing for fossil fuels should be phased out five times quicker than they are now, it said.

The report, by organisations including the Bezos Earth Fund, Climate Action Tracker, the UN Climate Change High-Level Champions, and the World Resources Institute, also revealed that only 15 of the 119 countries that signed the COP26 Global Methane Pledge include a specific, quantified methane-reduction target in their NDCs.

Senior fellow at the World Resources Institute Taryn Fransen said: “To come to grips with the climate crisis, we must seize on major opportunities that are still on the table. The European Union, Chile, Mexico, Turkey and Vietnam have all signalled they will strengthen their targets before the end of the year.”

If China were to set a concrete target to cut methane emissions, that would have a notable impact on the global temperature trajectory, she added. The US, which took a massive step forward by passing the Inflation Reduction Act, needed action by both federal agencies and state governments to implement it, she added.

Atmospheric levels of the three main greenhouse gases – carbon dioxide, methane and nitrous oxide – all reached new record highs in 2021, according to the World Meteorological Organization (WMO). Its Greenhouse Gas Bulletin, published last week, stated that the increase in CO2 levels from 2020 to 2021 was larger than the average annual growth rate over the last decade.

It also reported the biggest year-on-year jump in methane concentrations in 2021 since systematic measurements began nearly 40 years ago. The reason for this exceptional increase is unclear but seems to be a result of both biological and human-induced processes, it said.

“There is no good news from the perspective of the atmosphere,” said WMO secretary general Petteri Taalas. The organisation will soon publish new findings on climate change impacts, all of which are also negative, according to Taalas.

“Twenty years ago, sea level rise used to be about two millimetres per year, but recently we have seen 4.5mm sea level rise,” he said. A growing component of this is from glacier melt, he added.

Inger Anderson, UNEP’s executive director, said that countries had their chance to make incremental changes. “That time is over. We’re sliding from climate crisis to climate disaster. Only a root-and-branch transformation of our economies and societies can save us from accelerating climate disaster.”

“I know that some people think this can’t be done over the next eight years, but we can’t just throw our hands up in the air and say that we failed before we even really try – every fraction of a degree matters to vulnerable communities,” she added.

Every government should build the solutions in the report into their climate commitments and back it up with real finance, while those that are donors need to put money on the table to help poorer nations, she said. Private sector companies should rework their practices, and every investor needs to put their capital towards a net zero world, she added.

What is COP27? This year’s crucial climate talks, explained

UNEP at 50: What has the world’s ‘environmental conscience’ achieved?