Back in 2006, Serbia ratified the Energy Community Treaty, whose mission is to extend the EU energy market to its southern and eastern neighbours. From 2018, the country was required to implement a National Emission Reduction Plan (NERP) to limit pollutants, mostly from coal-fired power plants. Energy Community members are also expected to work towards decarbonisation, accelerating the transition to cleaner energy sources.

But Serbia has instead continued to build and plan new coal plants and expanded a lignite mine. These are financed by Chinese state-to-state loans, built by Chinese companies, and have negative environmental impacts. By approving such loans, China undermines its pledge to combat climate change, and Serbia further delays its coal phase-out.

Coal has ‘cult status’ in Serbia

Serbia has been a candidate for EU membership since 2012, though the road has since been bumpy. Currently, it meets around 70% of its electricity needs with lignite. “In Serbia, coal has a cult status,” said Mirko Popović, programme director of RERI. Since Serbian coal power plants are old and polluting – some were built in the 1950s and 60s – the construction of modern, less polluting plants is presented as a welcome improvement.

Construction of Kolubara B, a new plant near the capital Belgrade, is expected to start this year. The project was halted three decades ago amid the breakup of Yugoslavia, and then again in 2014 when the European Bank for Reconstruction and Development abandoned it, as it pivoted from coal. Then, in 2018, Serbia’s minister of mining and energy announced a technical study for the project had been completed. And last year the government signed a preliminary agreement with PowerChina to install a 350 MW unit by the end of 2024. Kolubara B is supposed to replace a power plant of the same name built in 1979, as well as the Morava power plant, installed in 1969. These two should be decommissioned by 2024, in line with the requirements of the Industrial Emissions Directive (IED), which was designed to ensure large thermal power plants apply the “best available techniques” and minimise pollution.

The construction of Kostolac coal power plant’s Block 3, near Požarevac, is under way, with China Machinery Engineering Corporation (CMEC) in charge of building. China Exim Bank provided a US$608 million loan for the construction back in 2014, as well as for the expansion of the Drmno open cast lignite mine in the Kostolac basin, once again with a sub-contract for CMEC. The expansion of the mine, from producing 9 to producing 12 million tonnes of coal per year, was completed in January 2020. 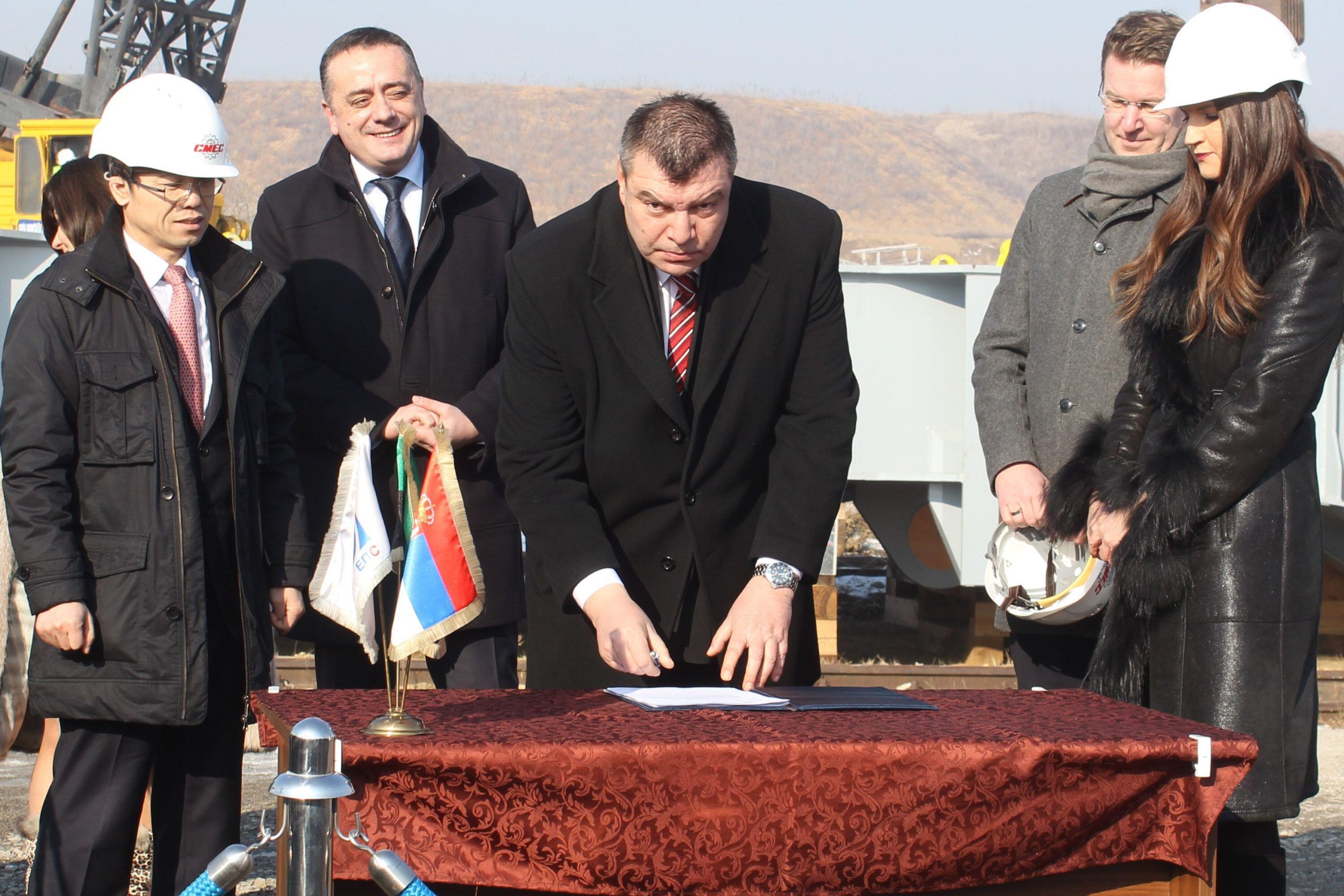 Then, in September 2020, a group of civil society organisations working in Southeast Europe wrote to the EU saying that Chinese state-owned enterprises have been breaching EU environmental laws in the region. They pointed out that none of the operational Chinese projects in Serbia (such as the Smederevo steel plant, the Bor copper mine or the tyre factory in Zrenjanin) “was in line with the latest EU pollution control standards”. They also noted that “most have very weak environmental assessment studies, and the Drmno mine expansion in Serbia had none at all”.

Even those projects supposed to improve the environmental conditions in the country, such as the desulphurisation system built to modernise the existing blocks 1 and 2 of the Kostolac power plant, “have seemingly failed”, noted Pippa Gallop, a researcher of Southeast Europe with Bankwatch.

Bankwatch, an NGO monitoring the activities of international financial institutions in Central and Eastern Europe, documented a number of irregularities. Construction of the system got under way in 2015, before its environmental impact assessment (EIA) had been concluded; the public consultation took place when the system was half-built; and the construction permit was issued in record time after that consultation. According to Gallop: “In 2017, the Serbian government declared the desulphurisation unit open. There was the whole ceremony, and then… nothing happened. Three years later, the unit is still not working.”

The Sino–Serbian strategic partnership began in August 2009 with a memorandum of understanding on infrastructure development between then presidents Boris Tadić and Hu Jintao. A second MOU on cooperation in the energy field was signed in May 2010, and the relationship was further strengthened in 2013 with a joint statement signed by then president Tomislav Nikolić and Xi Jinping.

The partnership has resulted in many infrastructure and energy projects financed by state-to-state loans and built by Chinese state-owned companies. Between 2010 and 2019, Chinese direct investment in Serbia reached US$1.9 billion. “In the past years, Serbia has [presented] itself as one of the biggest hubs for Chinese investment among the BRI countries,” said Vuk Vuksanović, a researcher at the Belgrade Centre for Security Policy.

As Serbia welcomes more energy projects, will Chinese companies ignore or bypass the common European environmental standards Serbia has agreed on? “China does provide a quick fix for some of the socio-economic plagues related to decaying infrastructure. But the fact is China doesn’t uphold the same set of standards as the EU,” said Vuk Vuksanović. He argued that direct deals with China, with no tenders included, benefit the Serbian elite. “It is nice for them to be the ones who have facilitated such deals and the arrival of Chinese capital to the country, to cut the ribbons at construction sites.”

In 2017, the Serbian government declared the desulphurisation unit open. Then… nothing happened. Three years later, the unit is still not working.

These “tied-loan” arrangements, where China’s policy banks provide finance on condition a contract is issued to a Chinese company, are not limited to Serbia. “Other countries also have export banks, but ‘traditional donors’ – Western countries – are generally against ‘tied-aid’. These kinds of loans and contract deals are particularly characteristic of the Belt and Road Initiative,” said Jonas Mardell, a researcher at the Mercator Institute for China Studies in Berlin.

In the EU, large public projects must go through open tender, ruling out a tied-loan arrangement. “It is not unusual for these deals to be done in secret, and it might be normal for Chinese companies to want to avoid tenders, but it really just depends on what the host country is willing to do for the money,” said Mardell.

In Serbia, direct deals and limited public scrutiny of such projects are facilitated by a lack of proper opposition to the ruling Progressive party (SNS) which won a vote majority of 62.6% in a parliamentary election in June 2020. Dissident voices are also lacking in the media. The country ranked 93rd in the 2020 World Press Freedom Index, and Reporters without Borders noted “the number of attacks on media has risen sharply, while officials increasingly use inflammatory rhetoric against journalists”.

Hristina Vojvodić from RERI says that in Serbia the decision-making process is often carried out behind closed doors. “It is almost as if the bigger the project, the less transparent it is.” The public was effectively ignored during the public consultation on Kolubara B. “The deadline for public participation was published at the very last moment, and we don’t even know if any public comments were taken into consideration. Moreover, it is unclear if Kolubara B is simply a replacement for the obsolete units or if its final capacity is going to be bigger than that,” she said.

China Dialogue asked EPS for a comment multiple times but received no response.

The environmental impact of Serbia’s Chinese investments is gaining some attention in the EU. In January, a group of Members of the European Parliament (MEPs) signed a joint letter to Olivér Várhelyi, EU Commissioner for Neighbourhood and Enlargement, in order to “highlight the continued environmental damage resulting from several heavy industrial projects in Serbia by Chinese-owned companies”. They also pointed out that as several projects are being developed close to Serbia’s borders with Hungary and Romania, any potential ecological effects are likely to impact neighbouring EU countries as well. “It is therefore in the interest not only of Serbia but of the European community in general to ensure that such effects are mitigated in scope and intensity,” the letter concluded.

How can Chinese investment in Europe avoid repeating past mistakes?

In Croatia, China’s building its bridge to Europe