Chinese president Xi Jinping told the UN general assembly on 22 September that China would achieve carbon neutrality by 2060. The announcement sparked a huge response and gave rise to speculation as to how this would be achieved.

On 12 October, research into a possible route to that target was published by Tsinghua University’s Institute for Climate Change and Sustainable Development (ICCSD) – the most authoritative roadmap to emerge since the commitment was made. If China follows the recommendations of the report, it could mean tougher energy-saving and emissions-reductions targets for the 14th Five Year Plan (FYP), a more ambitious Nationally Determined Contribution (NDC) for 2030, with yet faster and deeper decarbonisation to come from 2030 onwards.

Decarbonising for the 1.5C target

The 2015 Paris Agreement aims to limit climate warming to 2C (compared to pre-industrial levels) at the end of the century, while pursing efforts to limit the increase to 1.5C. That 1.5C target has been controversial because it requires greater emissions cuts and it was only added to the text of the agreement at the last minute.

Professor He Jiankun, project leader of the new study and chair of the ICCSD’s academic committee, said at a press briefing on the research that “achieving carbon neutrality by 2060 essentially means a long-term deep decarbonisation process oriented at the 1.5C target”. The director of the ICCSD is Xie Zhenhua, formerly China’s special climate envoy. Xie was also overall supervisor of this research project.

According to the roadmap presented in the study, by 2050 China must achieve net zero carbon dioxide emissions, with emissions of all greenhouse gases down 90% on 2020 levels, if it is to achieve carbon neutrality by 2060. The authors did not offer a specific roadmap for reducing emissions between 2050 and 2060, but said that emissions cuts should be increased, with negative emissions growth in the energy sector and more capture and sequestration of carbon dioxide using carbon sinks and carbon removal technologies.

The roadmap implies that all greenhouse gases are included in China’s 2060 pledge – something that observers had wondered about. But one expert close to China’s policy on non-CO2 greenhouse gases told China Dialogue that for now it remains an academic assumption, and official documents would be needed to confirm the government position.

Although the recommended roadmap is ultimately closing in on the 1.5C target, this does not mean China will immediately fast-track deep decarbonisation. The roadmap has two stages: before 2030 China will cut emissions according to an “enhanced mitigation scenario”, with a tougher 2030 NDC target and increasing efforts to reduce emissions. But that alone would leave China far from even the 2C target. However, the researchers propose much tougher measures after 2030, which will bring China into line with the 1.5C target. Assuming these recommendations are adopted, China will see a later, but steeper decline in emissions than it would if it set out to hit the 1.5C target immediately, with a carbon peak by 2030, an energy consumption peak around 2035, and carbon emissions approaching zero by 2050. 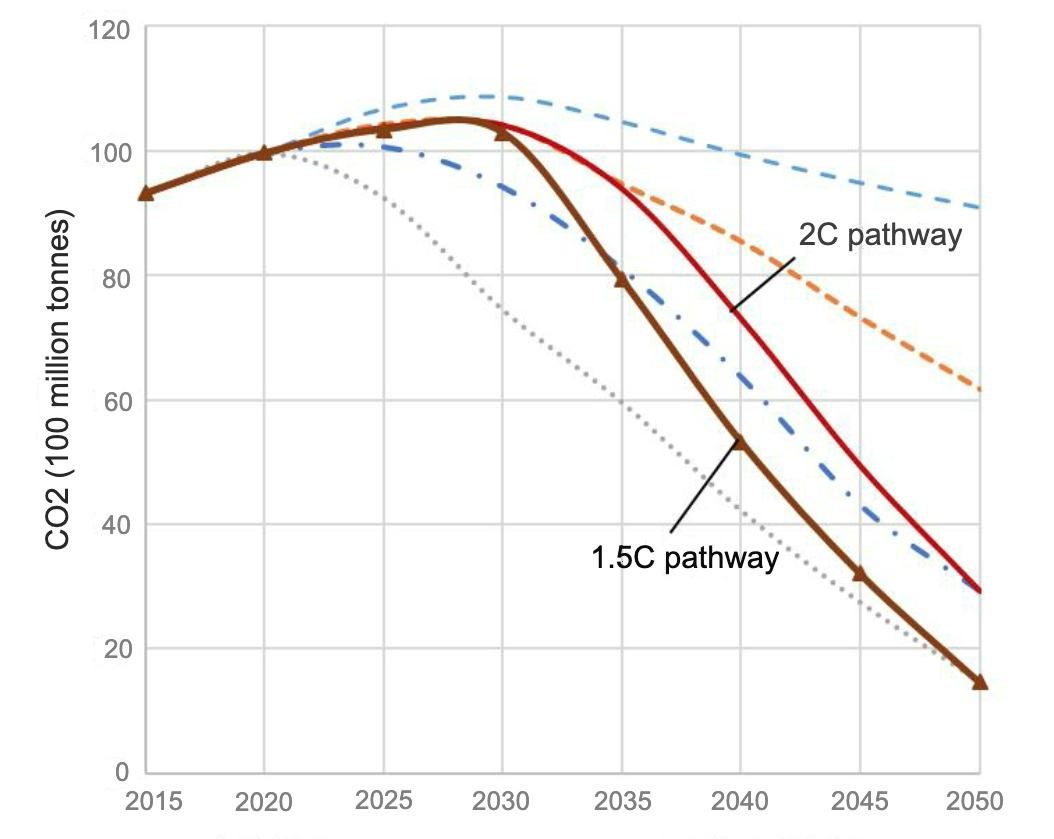 At the launch, He Jiankun explained that “the economy and the energy sector are hugely complicated systems, with a lot of inertia, so a transition will take time”. Rapid implementation of the absolute carbon cuts needed for the 2C or even 1.5C target would be very difficult, and China still needs to develop. So in the first stage, staving off additional emissions rather than cutting existing emissions should be the priority to bring about a carbon peak. But after 2030, the speed with which China reduces emissions will “far outstrip the developed nations”.

There is a great deal of interest in how China’s 2060 carbon neutrality target will affect the 14th Five Year Plan (for 2021-2025), which is currently being drafted, with this being seen as a test of China’s level of commitment.

The researchers also make suggestions for energy-saving and emissions-reduction targets in the 14th FYP, such as a 20% share of non-fossil fuels in primary energy consumption by 2025, and a carbon emissions cap of under 10.5 billion tonnes (2020 figures for these are expected to be 16% and 10.3 billion tonnes respectively).

“We have to control any rebound in coal use during the 14th FYP and work towards peak coal, or even negative growth,” said He.

The researchers also recommend China toughens and updates its NDC for 2030, lowering carbon dioxide emissions per unit of GDP by over 65% on 2005 levels and reaching a 25% share of non-fossil fuels in primary energy consumption.

Speaking at the launch, Wang Yi, a member of the Standing Committee of the National People’s Congress (China’s top legislative body) and vice director of the Chinese Academy of Sciences’ Institute of Science and Development, said that 14th FYP targets should remain tough and be expanded: for example, by including overall caps – in particular a carbon cap – alongside existing efficiency targets (such as carbon and energy intensity). Other experts have also called for a carbon cap in the 14th FYP.

Wang also pointed out that a package of legislation will be needed to ensure 14th FYP climate targets are met. This includes an Energy Law currently being drafted, an ongoing revision to the Energy-Saving Law, and a Law on Combating Climate Change being prepared. “The Law on Combating Climate Change will only reach the statute books if a carbon cap is at its core – if not, it loses a raison d’etre as other laws can replace it,” Wang said. Lower level regulations, such as for carbon markets, must also keep up, he said.

Offshore wind takes off in China