Without “immediate and deep” emissions reductions across all sectors, limiting global warming to 1.5C will be impossible, according to the latest assessment by climate scientists.

The warning came in the third report to be released in the last nine months by the IPCC (Intergovernmental Panel on Climate Change). It examines current emissions trends, future warming projections, and considers how to transition to a low-carbon economy in line with the Paris Agreement. Climate science and adaptation were the subjects of the previous two.

The latest report stresses the critical importance of the next few years. To stand a chance of keeping temperature rise below 1.5C above pre-industrial levels, greenhouse gas emissions must be peaked “before 2025 at the latest”, and reduced 48% by 2030, while methane also needs to be slashed by a third.

Limiting warming to around 2C would still require greenhouse gas emissions to peak globally before 2025, and be reduced by a quarter by 2030.

Globally, emissions have increased in all major sectors since 2010. There have been reductions in the energy intensity of GDP and the carbon intensity of energy production, but these savings have been overtaken by emissions increases due to increased activity in industry, energy supply, transport, agriculture and buildings, the IPCC said.

Even with radical action, it is “almost inevitable” that the world will exceed 1.5C, but could return below that by the end of the century, the report states. If current national climate plans are followed the world will likely pass 1.5C this century, with global warming of 2.8C possible by 2100 if ambition does not increase after 2030.

Jim Skea, professor of sustainable energy at Imperial College London, and co-chair of the working group that produced the report, told media that the rapid decarbonisation set out in the report would be a major change in direction for the world.

“The longer we put off action, the bigger the feasibility challenges [of staying within 1.5C]will be. That is a very, very clear message of the report,” he said.

The report references more than 59,000 scientific papers, and was finalised and signed off by 278 authors. A summary for policymakers then went through a line-by-line approval process by government officials from every country. The launch was delayed after this process ran over schedule by 40 hours.

Saudi Arabia watered down the wording on the need to phase out coal, oil and gas, while arguing for the repeated inclusion of references to carbon capture and storage that would allow the continued extraction of oil and gas, according to Climate Home News.

CO2 removal is necessary, but limited

Despite this, the report states that existing and planned fossil fuel infrastructure will exhaust the remaining carbon budget to stay within 1.5C. By 2050, the use of coal, oil and gas will need to be reduced by 100%, 60% and 70% respectively. Further installation of fossil fuel infrastructure without carbon capture and storage would lock in emissions and put 1.5C out of reach.

The IPCC has stated in previous reports that delays to emissions reductions have meant carbon dioxide removal (CDR) techniques will be needed, particularly for sectors where mitigation is most difficult, including agriculture, aviation, shipping, and industries such as steel and cement production.

CDR includes measures to enhance natural carbon sinks such as forests, peatlands and wetlands. It also includes technologies such as direct air capture, in which CO2 is removed from the atmosphere, and bioenergy with carbon capture and storage (BECCS), in which crops are grown and then burned for energy, with the resulting emissions captured and stored underground in geological reservoirs. 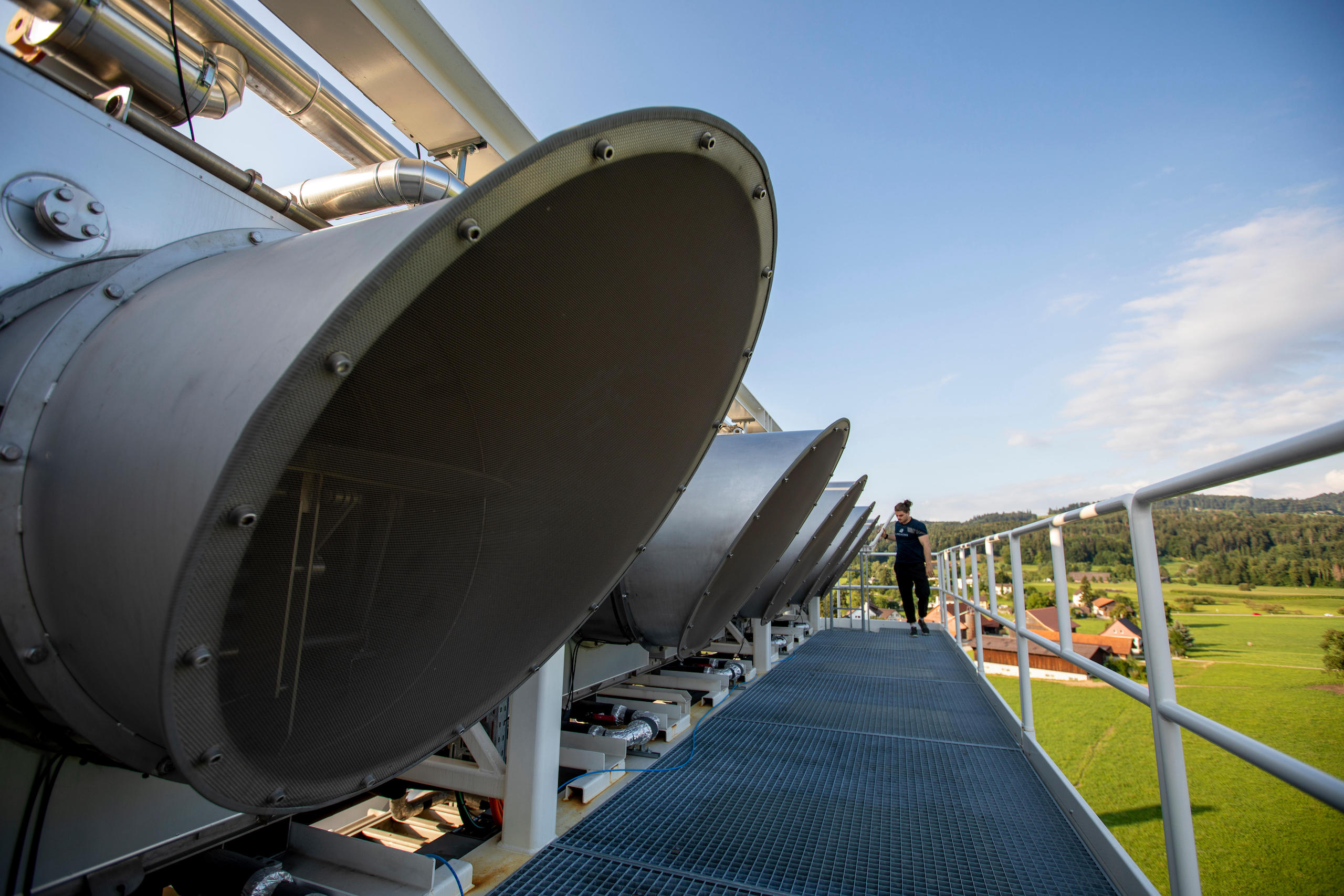 This direct air capture facility in Switzerland has 30 fans powered by energy from a waste incinerator. Each one can suck up to 135kg of CO2 out of the air every day. This is then used to boost the growth of fruit and vegetables in a nearby greenhouse. (Image: Orjan Ellingvag / Alamy)

However, the scientists are clear on CDR’s limitations, and on the trade-offs associated with all methods. Carbon capture and storage (CCS) could reduce emissions from large scale fossil-based energy and industrial sources only if underground storage is available and if CCS capture rates can reach 90-95% for new installations and a comparable rate for existing installations. But the technology faces economic, environmental and social barriers, stated the scientists.

“There are a very diverse number of approaches and technologies that count as carbon dioxide removal, and they all need to be addressed very carefully. With land-based CDR, you need to look out very carefully for social equity issues,” Skea said.

Peg Putt, coordinator of a working group on forests and biomass energy at the Environmental Paper Network, a coalition of more than 150 NGOs working towards environmental and social responsibility in the forest, pulp and paper industries, said BECCS would lead to forests being burned down, damage to wildlife and air pollution for nearby communities.

Philip MacDonald, analyst and chief operating officer at think tank Ember, called assumptions made about BECCS’ contribution to emission reduction “shaky”. “Where does the wood come from? How much energy was used to grow it? Did we chop down a forest for it? How was it transported? Many of these simple lifecycle questions are hard to pin down.”

The report did provide a glimmer of hope. Average annual emissions growth slowed to 1.3% in the past decade, from 2.1% between 2000 and 2009. At least 18 countries have now seen a decade of reductions in their production-based greenhouse gas emissions, and consumption-based CO2 emissions, mainly through decarbonising energy supply, reducing energy demand and improving efficiency. However, these reductions have only partly offset global emissions growth, the IPCC said.

The report points to some quick policy wins, noting measures that are all technically viable, increasingly cost-effective and supported by the public. These include solar and wind energy, electrification of urban systems, greening in cities, energy efficiency, demand-side management, improved forest and crop/grassland management, and reduced food waste and loss.

Costs of renewable energies have plummeted by up to 85% since 2010, faster than anyone had predicted, thanks to tailored policies. In fact, the economic benefit of limiting warming to 2C exceeds the cost of mitigation, the IPCC says. Options costing US$100 or less per tonne of carbon could bring greenhouse emissions down by at least the 2019 level by 2030. Half of that reduction could be achieved through measures costing less than $20 for every tonne of CO2. These include improving energy efficiency in buildings, shipping and aviation, and rolling out electric vehicles.

More investment in renewable energy is needed, while finance going towards fossil fuels must be halted, the IPCC says. Between 2020 and 2030, annual investments need to be three to six times greater than current levels across all sectors to limit warming to 1.5C, it states. While there is sufficient global capital and liquidity to close investment gaps, this will rely on clear signalling from governments and the international community, including a stronger alignment of public sector finance and policy.

The investment needed to fund transition measures is in the “trillions, not billions”, Skea said. Government investments alone will not close the gap, though government can use its finance more cleverly in order to incentivise the private sector to step up, he said. In many developing countries, the cost of capital is high, but governments can bring this down through export credit and loan guarantees to make projects investible, he said.

We are beginning to slow the pace of growth of emissions, the challenge now is to step up the pace of that action

Jim Skea, professor of sustainable energy at Imperial College London, and co-chair of the working group that produced the latest IPCC report

Poorer island nations repeated their plea for an end to fossil fuel subsidies, which the G20 committed to in 2009, but have not yet implemented. “Fossil fuel dependency is killing our planet. AOSIS [the Association of Small Island States] once again urges the G20 to phase out all fossil fuel subsidies by 2023 and immediately divest from emission-intensive industries, channelling all investment towards low- to no-greenhouse gas emissions and climate-resilient development,” said AOSIS chair, Walton Webson.

According to the IPCC, removing fossil fuel subsidies would reduce emissions, improve public revenue and macroeconomic performance, and could reduce greenhouse gas emissions up to 10% by 2030. UN Secretary General Antonio Guterres slammed governments and financial institutions who continued to invest in fossil fuels, calling this “moral and economic madness”. He said: “Such investments will soon be stranded assets – a blot on the landscape and the blight on investment portfolios.”

The IPCC stressed that the world already has the tools and knowledge to limit warming. Policies, regulations and market instruments put in place by many countries had been effective. Without these, emissions would have been 3-10% higher than they currently are.

A Chinese translation of this article will follow soon.

IPCC report is ‘blueprint for a future on the planet’