The disconnect between the reality of climate change and the bubble in which global climate negotiations take place grew wider as the extended COP27 summit drew to a close 40 hours behind schedule in Sharm el-Sheikh, Egypt.

The only success COP27 could show was the establishment of a fund to pay poor nations for the loss and damage they are suffering due to climate change. That negotiators have been forced to create the fund is an admission that three decades of negotiations have failed to mitigate greenhouse gas emissions or enable people to adapt to the impacts of climate change. The details of how the fund will work will be left to future discussions.

At the closing plenary session, Simon Stiell, executive secretary of UNFCC (the UN Framework Convention on Climate Change, under which the annual climate talks are run) acknowledged that the negotiations were “not easy at all”. The establishment of the fund “helps the most vulnerable”, he pointed out.

Failure in a code red year

The disappointing finale came in a year that started with warnings from the Intergovernmental Panel on Climate Change (IPCC) that emissions must halve by 2030 and reach net zero by 2050 if humanity is to avert a level of warming it will be unable to cope with.

The IPCC’s “code red” warning was strengthened by a series of reports in October. The World Meteorological Organisation (WMO) reported record levels of the three main greenhouse gases – carbon dioxide, methane and nitrous oxide – in the atmosphere. The UNFCCC reported that nations’ current emission reduction pledges (known as nationally determined contributions, or NDCs) would, even if fully achieved, still fail to keep the average global temperature rise within 2C of pre-industrial levels, as agreed to by all countries in the Paris Agreement, let alone the aspirational goal of keeping it within 1.5C. Instead, it estimated a rise of 2.4–2.6C by 2100. The UNFCCC has calculated that developing countries would need a cumulative US$5.8–5.9 trillion up to 2030 to fulfil even current NDCs.

All the experts who came to COP27 repeated their warnings and recommended solutions. In various parts of the sprawling seaside complex where the conference was held, survivors of climate-change-induced disasters related their experiences. In other places, activists chanted slogans. But government representatives were not listening.

Sanjay Vashist, director of Climate Action Network South Asia, said: “COP27 failed to deliver on any of the three key outcomes that could have accelerated climate action to avert the worst impacts of the climate crisis.

“In a year when the Pakistan floods reminded the world of the need for urgency, COP27 had nothing new to offer on ambition to reduce greenhouse gas emissions. At a time when island nations like Sri Lanka are teetering under economic and climate crises, it has failed to find ways to expedite the delivery of a promised [100] billion dollars per annum – forget any new or additional financial assistance. At a time when Bangladesh, the Maldives and Nepal are battered by multiple climate disasters, rich countries, especially the US, did not heed India’s call and failed to agree to phase out all fossil fuels – coal, oil and gas – for a sustainable and equitable clean energy transition.”

The negotiators from 197 governments bickered behind closed doors. Rich nations asked poorer ones to increase their ambition to control emissions, while they in turn asked how they could do so given that the rich nations have promised no new financial support, and have failed to even deliver on their promise, made in 2009, of $100 billion in climate finance per year by 2020.

Desperation and appeals for compromise

Sameh Shoukry, foreign minister of host nation Egypt and president of COP27, repeatedly appealed for compromise, including a public appeal the morning after the summit was scheduled to close.

UN Secretary General Antonio Guterres said: “We need to drastically reduce emissions now – and this is an issue this COP did not address.” Despite urging countries to “cooperate or perish,” in the end, the cooperation was just not there. In his closing statement, referring to the loss and damage fund, he said: “Clearly this will not be enough, but it is a much-needed political signal to rebuild broken trust.”

The European Union, too, criticised the lack of mitigation ambition during the closing session.

The desperation showed in the summit declaration, where one paragraph read: “The increasingly complex and challenging global geopolitical situation and its impact on the energy, food and economic situations… should not be used as a pretext for backtracking, backsliding or de-prioritising climate action.”

Despite this and other proclamations, the compromises in the operative portions made it a declaration far too weak to combat climate change. The only new activity in the mitigation work programme next year will be two “global dialogues”.

This despite the same declaration pointing out that “about $4 trillion per year needs to be invested in renewable energy up until 2030 to be able to reach net zero emissions by 2050, and that, furthermore, a global transformation to a low-carbon economy is expected to require investment of at least $4–6 trillion per year.” 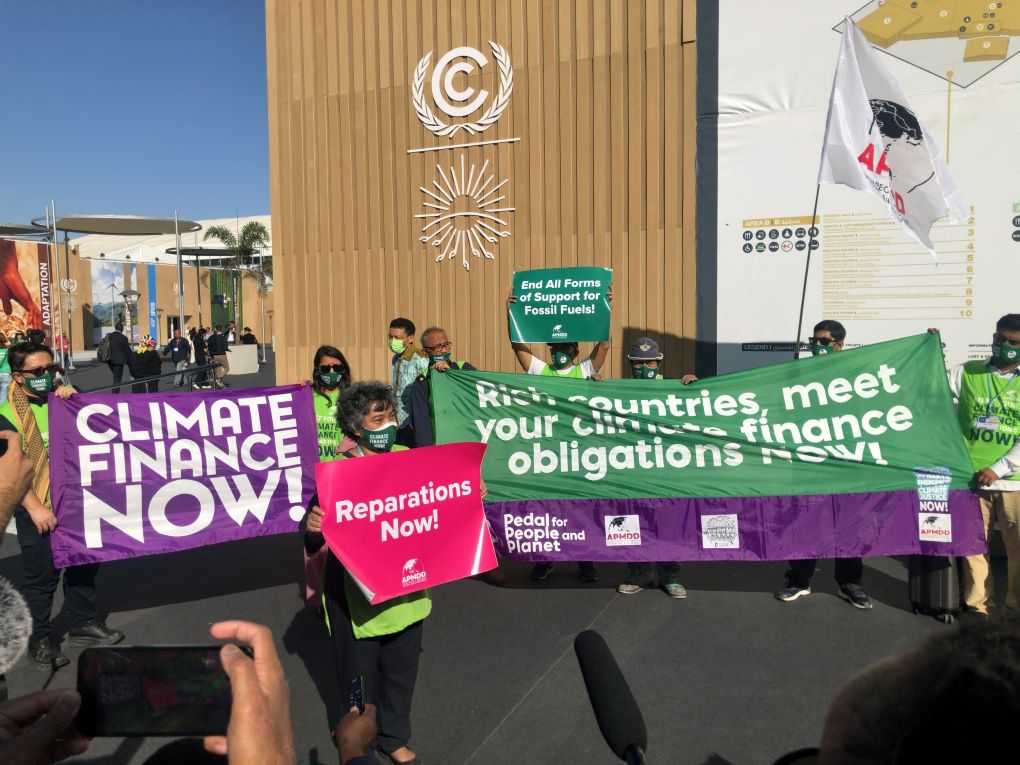 Many of the civil society activists at COP27 in Egypt emphasised the need for climate finance (Image: Joydeep Gupta)

The declaration also highlighted that “delivering such funding will require a transformation of the financial system and its structures and processes, engaging governments, central banks, commercial banks, institutional investors and other financial actors.”

It noted, “with concern the growing gap between the needs of developing country Parties, in particular those due to the increasing impacts of climate change and their increased indebtedness, and the support provided and mobilised for their efforts to implement their nationally determined contributions.”

The declaration stated that “global climate finance flows are small relative to the overall needs of developing countries, with such flows in 2019–2020 estimated to have been $803 billion, which is 31–32% of the annual investment needed to keep the global temperature rise well below 2C or at 1.5C.”

COP27 saw declarations from some rich nations that they would put more money into the Adaptation Fund. Apart from that, the only plan is to prepare a report on the doubling of adaptation finance, which had been agreed upon at the 2021 summit in Glasgow.

The lone success – a fund to pay for loss and damage

Many developing countries came to Sharm el-Sheikh with a one-point agenda: start a fund to pay for loss and damage. Saleemul Huq, head of the Dhaka-based International Centre for Climate and Development, said: “The establishment of the new fund… is a major achievement for all the developing countries, and we congratulate the developed countries for agreeing to set it up.”

Harjeet Singh, head of global political strategy at Climate Action Network International, said the fund “offers hope to the vulnerable people that they will get help to recover from climate disasters and rebuild their lives.” Huq and Singh have spearheaded for decades the move to bring the issue of loss and damage to the fore at climate negotiations.

Hailing the establishment of the fund, Guterres said: “This COP has taken an important step towards justice… Justice should also mean several other things: Finally making good on the long-delayed promise of $100 billion a year in climate finance for developing countries; clarity and a credible roadmap to double adaptation finance; changing the business models of multilateral development banks and international financial institutions. They must accept more risk and systematically leverage private finance for developing countries at reasonable costs.”