For a long time, keeping livestock has been the main economic activity here, but the enterprise faces myriad challenges, including acute scarcity of pasture and water. The dire situation in the region encourages cattle raiding which, in turn, has led to the proliferation of guns and other illegal weapons.

In times of drought, livestock farmers incur losses as they are forced to sell their animals cheaply. Butchers from Nairobi and other cities across the country flock to the villages to buy livestock at very low prices, with a mature cow sometimes selling for as little as US$50.

“This is a failed enterprise – selling an animal at a throwaway price is really discouraging,” says 57-year-old Jackson Cheboi, a former livestock farmer in Sabor.

Pastoralists in the region have always been at risk from drought. But recent years have been particularly punishing, with failed rainy seasons killing thousands of livestock, along with their owners’ livelihoods, and bringing the threat of starvation to the region.

According to government-owned news outlet Kenya News Agency, between January and April this year about 3,766 livestock died due to drought – 1,338 in Tiaty constituency and 1,245 in Baringo South – while 44,300 households suffered the pangs of climate change-induced famine.

Turning to aloe vera for relief

To mitigate the losses, Baringo farmers like Cheboi have decided to diversify to farming aloe vera and selling various products from the perennial plant. Aloe vera thrives in arid and semi-arid conditions and is well known for its medicinal properties. It has been found to be a viable way to alleviate the climate woes that have hit pastoralists in the Loruk, Kimalel, Sabor and Koriema areas.

Aloe vera farming in Baringo is not an entirely new enterprise. In 2004, the European Union donated about US$150,000 towards a project to promote aloe growing, harvesting and processing. The venture was successful on a number of fronts, but collapsed in 2008, reportedly due to poor management and poor pricing mechanisms, which disincentivised farmers from pursuing the crop.

Now, Cheboi and some other farmers – through their community-based organisation KOKISA (Koriema Kimalel Sabor Farmers’ Cooperative Society) – are working more with the crop. They have been manufacturing several products from it, including soap, shampoo and herbal medicine for treating various ailments.

My animals perished in the drought and some were stolen, I now fully depend on the aloe vera plant for my daily needs

Apart from the products, the farmers also sell aloe vera sap to foreign traders, mainly those from China, who go to villages that are accessible to buy the solidified sap and export it to their country. “This is what keeps me going. I have no other income. My animals perished in the drought and some were stolen,” Cheboi tells China Dialogue in Sabor village. “I now fully depend on the aloe vera plant for my daily needs.”

Alfred Chepkwony, another farmer from Baringo North, says the plant is the only solution for dealing with the numerous climate change-related challenges facing the people of Baringo. 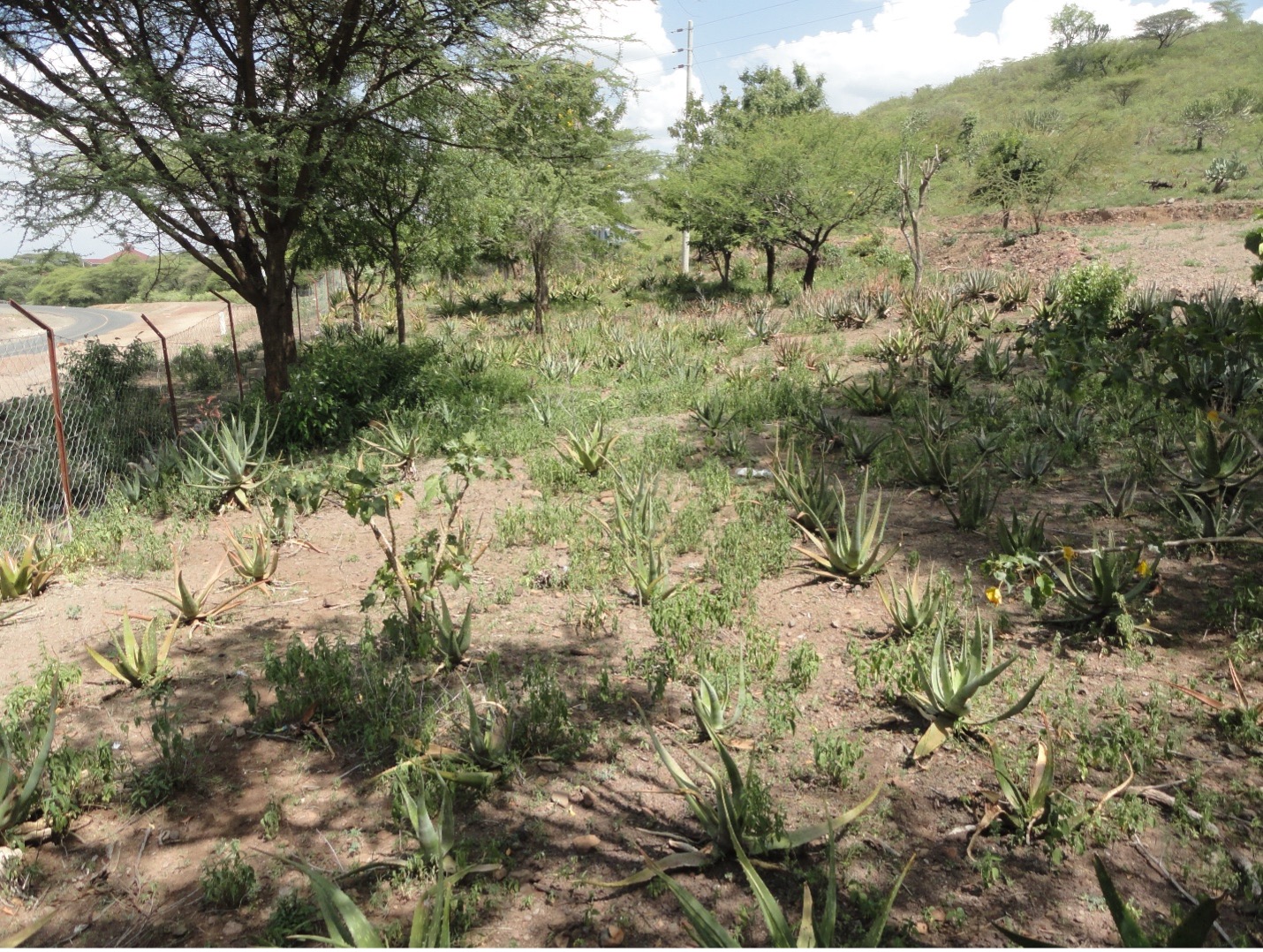 He says farming it is slowly transforming pastoralists’ in the region. “Our lives have been uplifted compared with those who still rely on livestock alone,” he says. “The crop also discourages animal raiding and lessens climate-related losses, because people keep only a few livestock that they can manage easily, as they farm aloe vera for their daily income.”

Joseph Ng’etich, project manager in charge of the Baringo Aloe-Bio-Enterprise Development Project, confirms that aloe farming has improved many lives in Baringo. “Aloe vera is a valuable plant and that is why we’re encouraging locals to grow it and stop depending on livestock. There is a big market in China where they can sell their products and earn good profits,” said Ng’etich.

Though beauty products and medicine manufactured from the sap attract high demand locally, most farmers prefer selling their sap to Chinese traders at US$1.5 per kilogram.

According to Evans Taracha, chief of research at National Museums Kenya, Baringo can produce up to 7 tons of aloe sap per acre, worth more than US$15,000 per month – an amount that cannot easily be matched by livestock farming in this arid and semi-arid region.

In Turkana County, too

It is not only Baringo farmers who have resorted to aloe vera farming to alleviate losses triggered by climate change. In neighbouring Turkana county, locals have also formed farmers’ groups with the aim of engaging fully in aloe farming and production of various products.

With assistance from Kenya Forestry Research Institute, group members have established aloe nurseries to end their reliance on wild-growing aloe and begin cultivating the plant, thereby ensuring regular supplies of sap. At the moment, they are manufacturing soap and beauty products which they sell locally at Kakuma Refugee Camp and in Lokichogio town.

As is the case in the villages of Baringo, the enterprise has transformed the living standards of the locals of Nalapatui village in Turkana West, which is also located in a region where crime such as cattle raiding is common.

“Money that I get from aloe products has enabled me to start other businesses. I own a retail shop inside the village where I also sell various products,” says Ekuro Ekutan, a farmer in Nalapatui.

Not an easy venture

Cultivating aloe vera requires relatively low levels of chemical inputs and next to no weeding. The locals say once planted, the plant kills the weeds by itself and cannot be eaten by animals, mostly because its leaves have a thorny structure on both sides, complete with a thorny tip. Information published by the Kenya Agricultural Research Institute does, however, suggest using nitrogen-phosphate-potassium fertilisers at a rate of around 20 kg per acre, as well as occasional insecticide to combat mealybugs which feed on the plant’s sap.

The exercise of squeezing sap from the plant and processing it into the final product is not easy, demanding a lot of labour. 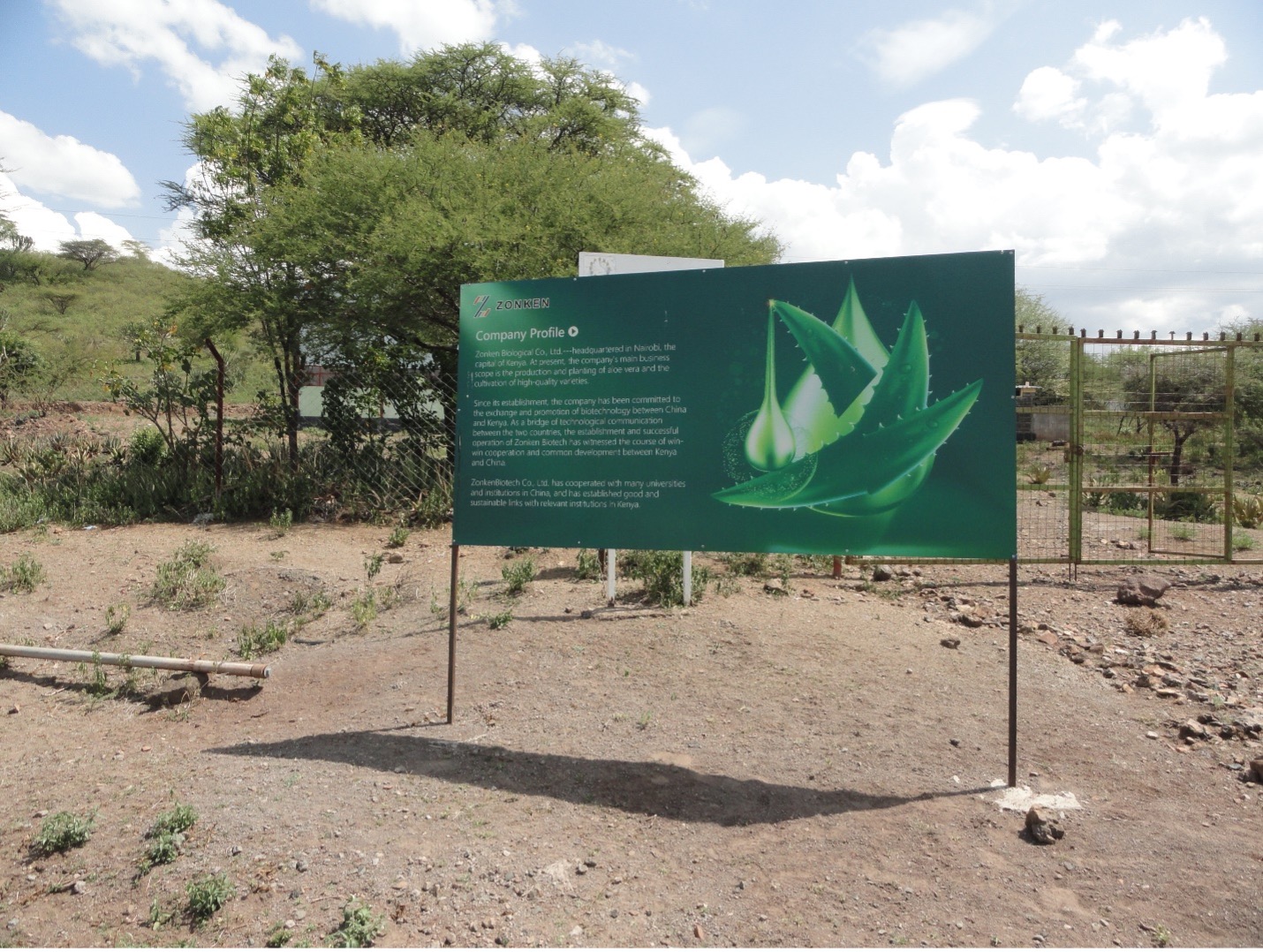 A farmer in Kimalel, Pamela Chepcheng, says sap must be boiled to a level that facilitates solidification. “Once the liquid is thick, it is removed from the boiling pot and poured into another container to cool. After about 30 minutes, the thick sap turns solid,” she says. “The solid materials are then broken into small pieces and packed in gunny bags, ready for the market.”

Chepcheng says the process is quite burdensome and that sometimes one is forced to hire many workers to do the job, “which turns out to be expensive compared to the profits we earn after the whole process.”

According to Ng’etich, in a day a farmer working alone can squeeze up to five litres of the green liquid from the plant. Those farmers who live in remote areas, from where it is difficult to reach the market themselves, will tend to sell the sap to traders at about US$0.30 per litre, earning up to US$45 in a month.

“The Chinese traders buy the sap at US$1.5 per litre [from markets] but the farmers think the price should be hiked to around US$4 to make the business more lucrative,” he says.

Though the profits are not encouraging, Chepcheng is not disappointed. She tells China Dialogue that aloe farming has empowered her to build a house for her family and send the children to school. She is also able to feed them, unlike before when they depended on relief food.

“After selling the sap and getting the money, I am able to do many things,” she says. “I pay school fees for my six children: three in primary school, two in high school and one at a local university.”

Two years ago, the county government of Baringo signed a memorandum of understanding (MOU) with a Chinese company, Zonken Biotech Company Limited, to promote aloe vera farming and marketing in the region.

According to the MOU document, Zonken is tasked with promoting the farming as well as undertaking marketing activities and purchasing sap from local farmers, while the Baringo county government must allocate land for setting up a facility to help process aloe.

Baringo governor, Stanley Kiptis, says the chief aim of signing the MOU was to commercialise aloe farming in the county so as to improve farmers’ living standards.

“We need our people to change their mentality, from relying on livestock, to aloe vera farming, a venture that is more profitable than just keeping animals. We, as the government, would like to see our famers living a decent life,” Kiptis tells China Dialogue.

“We have more than 7,000 square kilometres of land that has been left fallow for many decades. If we can plant aloe vera on this land, we will change our lives forever; relying on livestock is now an outdated way of doing business,” he says.

Zonken has already started renovating a stalled facility in Koriema in Baringo South to process the aloe sap, a departure from the current practice whereby farmers process the sap manually.

A representative of the company, William Chin, says the company is also expected to employ many women and younger people, below 35 years old, as soon as it begins its operations. He says Zonken will offer good incentives to farmers “to further boost their morale which has been low for a long time due to low prices.”

Nature an underrated ally against flood and drought