China’s steel industry has pushed back its timetable for reaching peak carbon, from 2025 to 2030, highlighting uncertainties over its ability to slash emissions in the longer term.

On 7 February, guidance on developing the sector was jointly published by the ministries of industry and environment and the National Development and Reform Commission. It stated that the industry’s carbon peak must happen by 2030. Previously the target had been five years sooner, as published in a draft of a peak carbon action plan from the China Iron and Steel Association, and posted on an official WeChat account.

The new guidance identified the main problems in the sector as over-capacity, environmental performance and “low levels of consolidation” – meaning there are many small, difficult-to-regulate steel mills.

Cutting emissions from high-carbon industries, such as steel and cement making, is crucial to China’s efforts to meet its dual carbon targets, of peaking by 2030 and neutrality before 2060. But low-carbon restructuring, and adopting and commercialising greener technologies, will be tough to do at scale. Support from the financial markets is sorely needed.

A recent report from the Climate Bonds Initiative (CBI), which works to mobilise global capital for climate action, found China needs to spend between 2.2 trillion and 12.5 trillion yuan (US$346 billion–$1.97 trillion) each year on combatting climate change. Government funding alone will not be enough: private sector and social capital must be leveraged.

“Green finance” is, however, hard to come by. The field has grown tremendously as a result of strong demand from emerging industries such as renewable energy. But high-carbon industries usually don’t qualify as “green”, meaning green finance is out of reach for many firms.

So, where should the money for decarbonising heavy industry come from and where should it go? “Transition finance” may be the answer. There is as yet no widely accepted definition for the term, so standards and mechanisms need to be designed, and to be consistent with top-level policy and sectoral roadmaps.

China’s high-carbon industries have no choice but to change. Crude steel output increased 31% between 2013 and 2020, from 813 million tonnes to over 1 billion, according to the CBI report. Though carbon intensity of production dropped around 8%, overall emissions still grew by 20.71%.

Steelmaking is a “pillar industry”, accounting for 5% of China’s GDP and producing 50% of the world’s steel. However, it is responsible for 15% of the country’s carbon emissions – second only to the power sector.

Decarbonisation technology in the industry is immature and not yet commercially viable. Figures from the CBI report show that achieving carbon neutrality will cost the sector a massive 20 trillion yuan (US$3.1 trillion). That’s 500 billion yuan a year until 2060, or 500 yuan per tonne of annual output.

The sector is working on three routes to decarbonisation: lowering crude steel output; shifting from the basic oxygen furnace method of steelmaking towards recycling steel in electric arc furnaces; and adopting more advanced or even disruptive technologies such as hydrogen direct reduction in the production of iron (which is the main ingredient in steel). Developing new decarbonsiation routes and equipment, and scaling those up for commercial use, will require investment.

A report published last year by the Rocky Mountain Institute (RMI), a Colorado-based sustainability research organisation, said that zero-carbon steel production will cost far more than traditional fossil fuel-powered approaches. For example, at the current hydrogen price of 40 yuan (US$6) per kilogram, making iron with hydrogen direct reduction tech will increase the cost of crude steel by 80%.

Li Shuyi heads up the RMI’s heavy industry decarbonisation project. She said: “There are hydrogen metallurgy demonstration projects, but we need more investment to get the costs down. And if the steel industry starts using hydrogen, or even green hydrogen produced from renewable energy, investment in infrastructure will be needed. The transition will also see furnaces retired early, which could lead to significant stranding of assets, and that process will also require funding.”

As mentioned, the problem is that high-carbon industries don’t qualify as “green”, and so are shut out from green finance markets. Such markets are relatively well developed and use “taxonomies” to define and decide which investments qualify for their funding. This has created a new imperative for the financial markets to develop new tools to get funding to the sectors and activities where it is needed.

That gave rise to the idea of transition finance. Globally, the main transition finance product is the SLB, or sustainability-linked bond. The money raised via an SLB is usually intended for general operating expenses rather than for a specific project, asset or activity. However, the firm issuing a bond is required to make sustainability commitments and set key performance indicators (KPIs) – such as emissions reductions – for those goals. The interest rate for the bond is linked to the KPIs. If commitments are met or exceeded, the rate is reduced. If not, it is increased, or the bond comes due earlier.

Whereas a green bond must be for an activity defined as “green”, SLBs only require a commitment to be greener, making them better suited to high-carbon firms.

Ricco Zhang, senior director for Asia Pacific at the International Capital Market Association, said: “SLBs are different. As long as there are environmental, social and governance aspects to a bond, investors can get on board. Meanwhile, issuers that don’t qualify either as green or sustainable can still issue bonds to fund their transition. This can give us a win-win situation.”

According to reports, the Liuzhou Steel Group issued China’s first steel-sector SLB last year. Its linked goal was to reduce nitrogen oxides emissions to 0.935 kg per tonne of product by 2022 – 0.188 kg lower than in 2020. So far, however, the Chinese steel industry has not issued any SLBs with carbon-cutting goals attached. 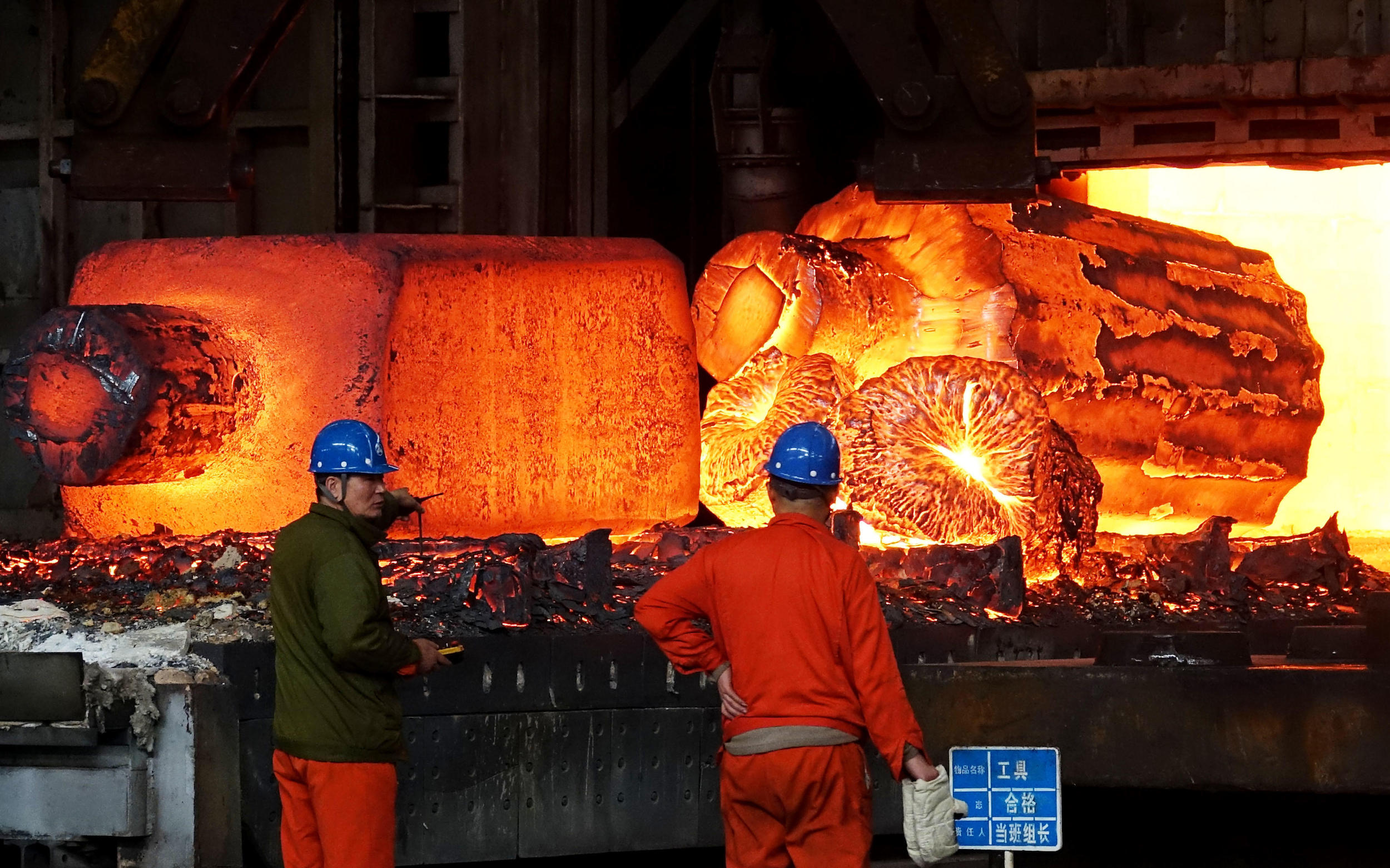 And while SLBs have been welcomed, questions are also being raised.

Xie Wenhong, head of the China Programme at the Climate Bonds Initiative, told China Dialogue that currently companies issuing SLBs can set and meet their own targets. This one of the reasons these bonds have expanded so quickly, but how can we make sure firms are setting ambitious and credible targets, rather than simply greenwashing? And if ambitious targets are proposed by the lender, will companies sign up?

“Meeting ambitious targets will often require huge amounts of work by the company, and they might not be confident of success,” Xie added. “At the executive level, there might not be anyone willing to be responsible for any failure to meet the target. That means companies aren’t keen to issue SLBs with ambitious targets and clear sanctions for failure.”

Urgent need for a single standard, and more products

Many of these issues stem from the lack of a single definition and standard for transition finance. This makes it hard to judge whether or not the activities of high-carbon industries align with the goal of net zero emissions, and investors worry they will be accused of greenwashing or “transition-washing”.

Xie thinks financial regulators need to set the sector a clear, ambitious and credible standard for transition finance, to coordinate between the financial world and the real economy, with investment proposals, actions and measures for individual sectors.

CBI research into the steel industry has found continuing over-capacity, imbalanced product structures, high financial leverage, poor inventory management and environmental pressures. This has led financial institutions to take a cautious approach to providing finance. Concerns about greenwashing would be greatly reduced if a clear roadmap for a transition in the sector was produced, with a single standard, specific performance indices, and tools to help investors track progress. If steelmakers can boost their environmental progress and raise corporate credit ratings, all while improving commercial performance, investors will take note.

Meanwhile, other transition finance products could be produced, such as investment funds and insurance. Ma Jun, chair of the Green Finance Committee of the China Society for Finance and Banking, said in an interview with 21st Century Business Herald that highly leveraged firms, small and medium-sized enterprises, and firms requiring risky low-carbon tech, are more likely to require equity financing than loans or bonds. Equity investment, and merger and acquisition funds supporting the transition, are needed, so capital markets can play a role in the process. Meanwhile, uncertainties associated with the transition mean insurance products to offset those risks are also required. According to Ma Jun, China’s steel firms are highly leveraged and need financial institutions to come up with innovative products, tools and mechanisms, which will give them the time needed to absorb the costs of the transition, and bring them more funding opportunities.

Ma Jun also suggested that transition finance products could consider the idea of a “just transition”, and require firms to consider impacts on employment and take measures to preserve jobs. When designing new instruments, financial institutions could use performance on maintaining employment as a KPI.

How should businesses in China react to new environmental disclosure requirements?

As the AIIB reviews its energy strategy, will it finally go fossil free?