China can do many things to help climate-vulnerable countries deal with the loss and damage caused by climate change, various experts have told China Dialogue.

Humanitarian aid, debt relief, technology transfer and knowledge sharing are some of the contributions that could be made or increased, they say.

It will be interesting to see how China intends to contribute to the agenda, even if its assistance takes non-financial forms, they add.

One says if China could make “substantial” non-financial contributions, it would help demonstrate its leadership in international climate diplomacy and put pressure on developed countries to deliver funds.

Although there is no internationally agreed definition, loss and damage generally refers to the adverse and often irreversible consequences of human-caused climate change.

Such consequences can take economic and non-economic forms. They include destructive impacts of extreme weather events, such as floods and droughts, and slow-onset events, like sea level rise and glacial retreat.

Loss and damage is important because it is “an issue of justice”, says Azhar Lashari, programme lead at Policy Research Institute for Equitable Development, a thinktank based in Pakistan.

“The risk the world is facing today due to climate change is caused by the cumulative effects of emissions made by the combustion of fossil fuels,” he says. “We need to know who benefited from it and who is bearing its cost.” 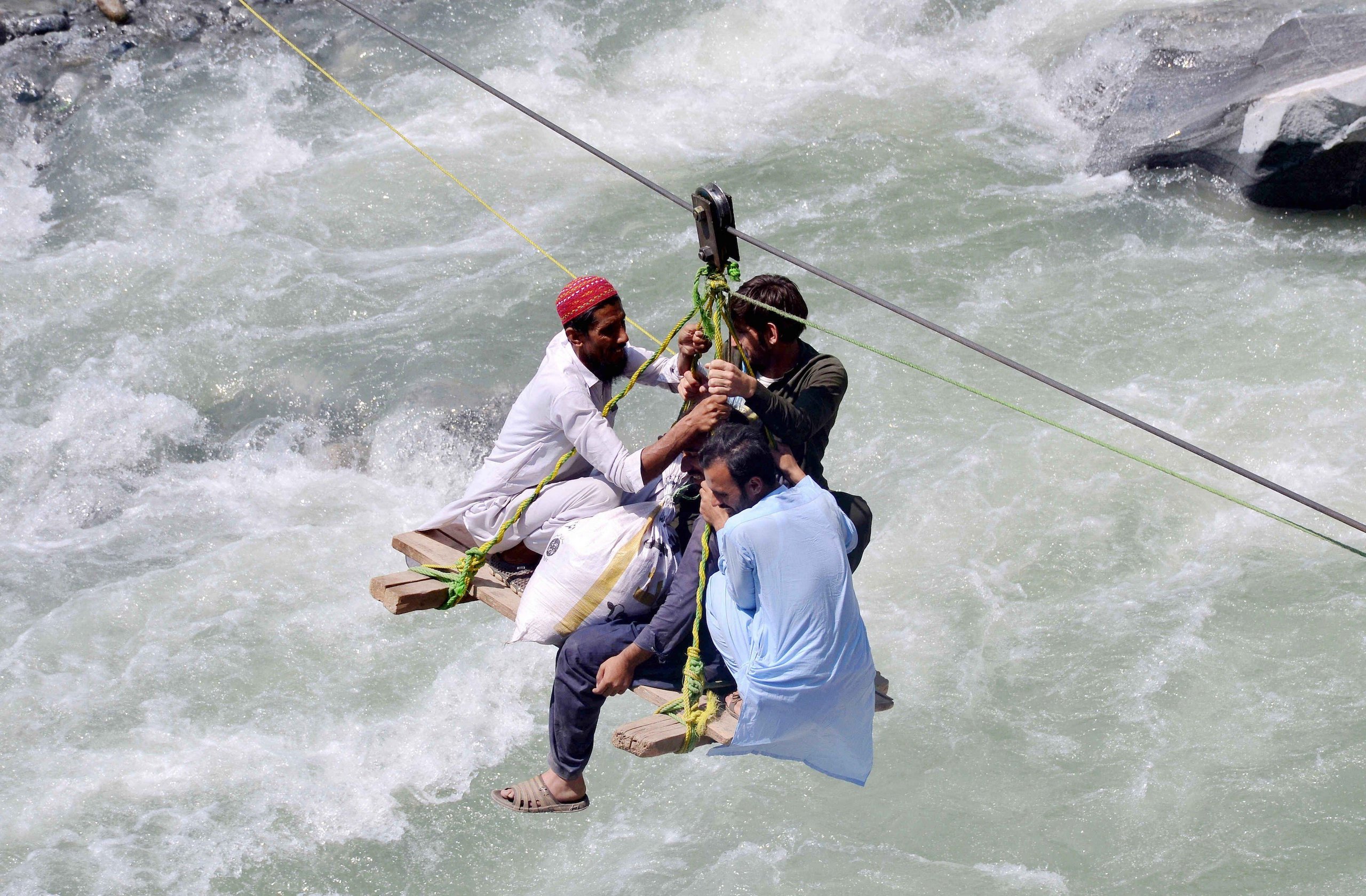 Lashari says that many countries bearing the brunt of loss and damage have low national greenhouse gas emissions and are less developed economically. For example, Pakistan, which was struck by devastating floods this summer, only contributes 0.9% of global emissions annually.

“It is the responsibility of developed or industrialised countries to support the developing countries in coping with the risks and threats associated with climate change,” he adds.

Developed countries, which achieved industrialisation through fossil fuels, had long resisted the demand from developing countries for financial compensation, fearing they could be held legally responsible for large sums of claims.

At COP27, they agreed to set up a new Loss and Damage fund to help those developing countries that are “particularly vulnerable to the adverse effects of climate change”. But key issues have been left unanswered, including who exactly should pay.

China’s position on loss and damage

China is in a unique position in the loss and damage negotiations under the UNFCCC (UN Framework Convention on Climate Change – which runs the COP climate conferences) because it is simultaneously a developing country, the world’s current largest greenhouse gas emitter and the world’s second-largest economy.

Its “developing country” status means that according to the UNFCCC’s principle of “common but differentiated responsibility”, it is not obligated to pay into the fund. At COP27, China negotiated alongside other developing countries to call for developed countries to provide financial compensation.

At the same time, China’s emissions volume and economic status have grown rapidly since the formation of the UNFCCC 30 years ago. These changes have led developed economies, such as the US and EU, to argue that China should also pay.

China’s climate envoy, Xie Zhenhua, said at COP27 that as a developing country China did not have “the responsibility” to make financial contributions for loss and damage. Xie did not clarify whether China would nonetheless pay into the newly established fund.

Li Shuo, senior global policy advisor at Greenpeace East Asia, tells China Dialogue that China should make up its mind on how to contribute to loss and damage “from now until 2024”.

In 2015, prior to COP21 in Paris, China clarified its role in global climate financing by announcing the establishment of a China South-South Climate Cooperation Fund to provide 20 billion yuan (roughly US$3.1 billion at the time) to help other developing countries tackle climate change.

Li says China will need to address the same issue again in 2024 and 2025 when countries need to discuss new financing arrangements from developed to developing countries and draft new climate plans (known as nationally determined contributions, or NDCs). He calls it a “very important” question.

Li notes the “high pressure” and “high expectation” from the international community for China to pay. He says the expectation partly stems from developed countries’ political motivation to shift the attention away from their financial responsibilities; and partly from the fact that current global financing is insufficient to deal with climate change.

Loss and damage is one of the three pillars of the global climate negotiations, alongside mitigation and adaptation.

Mitigation aims to prevent or reduce greenhouse gas emissions. Adaptation deals with the climate change impacts that are already occurring or will occur. Loss and damage addresses the consequences when climate risks have not been successfully mitigated or adapted to. However, there is debate among negotiators and policy advisers over the boundary between adaptation and loss and damage.

Saleemul Huq, a Bangladeshi scientist, told China Dialogue previously: “We want both mitigation and adaptation to increase so that we minimise loss and damage. But we cannot bring it down to zero.”

At COP27, Xie Zhenhua, China’s special climate envoy, stated that China was willing to contribute to loss and damage by helping other developing countries adapt to climate change via its “south-south” mechanism. However, Xie did not provide further details.

China has been promoting collaborations between Global South countries through an umbrella programme called “South-South Cooperation”. The programme covers a wide range of areas, from food security to infrastructure building. The climate cooperation fund is part of the programme.

Belinda Schäpe, climate diplomacy researcher on EU–China relations at thinktank E3G, says that China is already helping other developing countries address loss and damage through bilateral rather than multilateral mechanisms.

She adds that China has so far delivered 10% of its promised China South-South Climate Cooperation Fund, or 2 billion yuan, according to official data. Xie mentioned the same figure at COP27.

Li says the reason China often emphasises its south-south cooperation fund while talking about loss and damage is that the fund is a bilateral programme.

He explains that, in China’s political thinking, bearing financial responsibility in a multilateral mechanism would mean that it has “graduated” from the class of developing countries to a developed country that needs to donate money and answer for its historical responsibility.

“China will not be willing to make such a political statement,” he adds.

Other experts also point out that China can contribute to the loss and damage agenda in many ways.

Hu Min, principal and co-founder of Innovative Green Development Program, a Beijing-based green consultancy, says that although the new UNFCCC financing mechanism is important, the world cannot rely on it alone to deal with loss and damage.

She notes that other methods are equally – if not more – important, such as carrying out technical cooperation and making investment decisions that give more consideration towards the prevention and response to climate risks.

Hu notes that more projects under China’s south-south mechanism and its Belt and Road Initiative could address loss and damage.

Schäpe of E3G thinks that China’s existing bilateral programmes could be “extended by a lot” to help climate-vulnerable countries on loss and damage.

“China itself is very vulnerable to climate change… It is developing its own mechanisms to adapt to and prepare for [the impacts]. Sharing expertise and capacity building on those things is something beyond the financial contributions that could be happening,” she explains.

Schäpe continues: “In a broader sense, loss and damage only happens when adaptation and mitigation fail. So, the biggest gift China can give vulnerable countries on loss and damage is accelerating its transition and lowering its emissions.”

Adeline Stuart-Watt is a policy fellow focusing on adaptation and resilience at the Grantham Research Institute, London School of Economics. She tells China Dialogue that if China makes “some kind of substantial non-financial contribution”, it would show its goodwill in supporting the agenda, demonstrate leadership in this area and put further pressure on developed countries, especially the US.

The solutions to natural disasters are connected