China’s national carbon market will start operating on 1 February, as mandated by a key regulatory document. Although it will take time for the pricing to be meaningful, eventually the system is likely to have a substantial impact on investment decisions.

“Measures for the Administration of National Carbon Emissions Trading” (hereafter “Measures”) appeared earlier this month, 5 years after the 2015 joint statement on climate change between President Xi and then US president Barack Obama established a cornerstone for the carbon market to move forward. It lays out how carbon emissions “allowances” are to be allocated, how trading should be conducted and how measurement and verification should be done. It also represents the culmination of many years of speculation among industry players, environmental advocates and the international community.

As the Measures were issued by the Ministry of Ecology and Environment (MEE) they carry lower legal authority than that of a State Council regulation. But a ministry-level ordinance is considered the fastest way to trigger the early operation of an ETS. It is likely to play a transitional role until higher-level legislation is developed. Last month, Vice Minister Zhao Yingmin of the MEE also announced that it will push for a Climate Change Law, which may fill this higher-level role.

Taken together with the ambitious climate targets announced by President Xi in September, the timing of the publication of this regulation suggests that 2021 will be the year that China’s carbon market finally comes of age.

A decade-long journey to a national carbon market

Beginning at the end of 2011, eight regional emissions trading systems were consecutively introduced in different parts of China (Shenzhen, Shanghai, Beijing, Guangdong, Tianjin, Hubei, Chongqing and Fujian). These provided valuable experience for the central government in developing a national carbon pricing mechanism. They have adopted caps based on carbon intensity (emissions per unit of GDP) rather than an absolute emissions cap. This approach is consistent with a number of other emissions trading systems, including in the United Kingdom (during the first phase of the EU ETS) and Alberta, Canada. It has been adopted by the Chinese government as best suited to achieve both economic growth and emissions reduction. 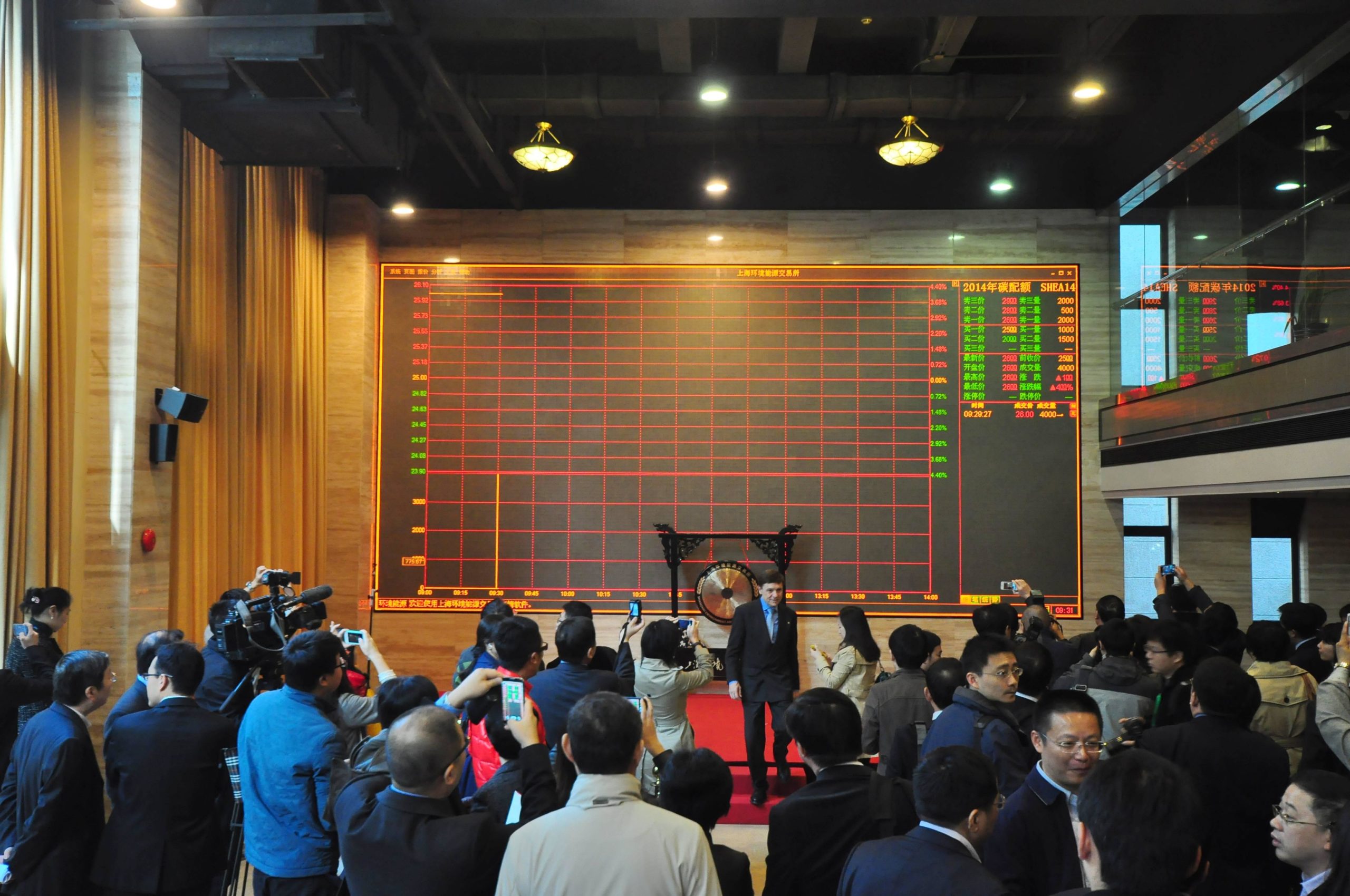 In December 2017, the National Development and Reform Commission (NDRC) released a “Development Plan” for an ETS in the power sector. The plan outlined a roadmap with three phases: foundational; simulation trading (without compliance obligations); and market operation.

In 2018, China undertook a major governmental restructure, after which responsibility for the ETS fell to the MEE. Simulation trading was originally expected to begin around 2020, with the market operation phase starting approximately one year after that. But Covid-19 delayed the process. Nevertheless, several major policies or drafts were issued in the second half of last year, leading ultimately to the publication this month of the Measures and other key regulatory documents, which will directly kick-start the 1 February launch of the market operation phase.

For context, the European Union’s ETS was first regulated in 2003 and went through a pilot phase before becoming a functional market in 2008. It experienced turbulence following the global financial crisis, and it is only in the last 12 months that the market has seen carbon prices considered substantial enough to impact on investment decisions. Emissions trading systems aren’t simple to introduce. But they can be very important drivers of change over the long term. This makes them of keen interest now that Europe and China have introduced net-zero carbon emissions targets for 2050 and 2060 respectively.

How will the system work?

In its initial stage, the national ETS system will cover China’s power sector, which roughly accounts for 30% of China’s total emissions, with over 2,000 power-generation facilities enlisted. In time, industries such as cement, steel, aluminium, chemicals and petrochemicals will be integrated.

The power sector accounts for roughly 30% of China’s total emissions.

Enterprises covered by the national ETS will be excluded from the regional pilots, to avoid double counting and double taxing, according to the Measures. Of course, those entities that have experience trading and developing compliance strategies at the regional level may have some first-mover advantage.

At the beginning, all emissions allowances are to be allocated for free. The Measures state cautiously that the auctioning of allowances will be “introduced at the appropriate time according to the situation”. This represents a change from an earlier draft that suggested the share of allowances to be auctioned would increase over time. Free allocation makes it difficult for companies to conceive of the price as representative of a true cost. This is a key factor in why the regional markets have not been very active, and consequently not led to genuine price discovery. At the same time, state-owned enterprises and financial institutions have advised government that the ratio of paid allowances is a highly sensitive factor for their profitability and credit risk respectively. This may have resulted in the more cautious approach reflected in the final version of the Measures.

Carbon financial derivative products, such as repurchase agreements and futures, will not be allowed at the beginning of the national market (only direct exchange of allowances will). This will disappoint some players who believe such products have helped to increase liquidity in the regional carbon markets, and also created additional stakeholders in the healthy development of the market. Regulators are likely to take a cautious approach to derivatives for the sake of market stability and to ensure that speculation does not get out of hand.

The biggest change in the Measures compared with the original NDRC plan is that verified company-level emissions must be disclosed to the public. This should help to increase transparency of the system, raise the level of compliance by emitters and verifiers, make important information available to financial markets, and possibly allow for prosecutors and the public to challenge non-compliance.

Even though the Measures have laid out the fundamental regulatory framework for a national ETS, there are a few key issues still waiting for further clarification, such as the rules and procedures for companies to interact with the exchange platform and registry.

The 2020 China Carbon Pricing Survey was undertaken in July–August last year, shortly before Xi’s 2060 carbon neutrality pledge. It obtained expectations about the future of carbon pricing in China from 567 market participants and related experts, the largest such exercise to date.

For context, the price in the EU ETS rose from about US$5.5 per tonne in 2017 to over US$36 by the end of 2020, around the historic high. In the United States, where carbon markets operate in both California and the northeast states, recent prices have been at around US$17 per tonne and US$7 respectively. A high-level commission on carbon prices, chaired by eminent economists Joseph Stiglitz and Nicholas Stern in 2017, on the other hand, suggested that prices of at least US$40–80 by 2020 and US$50–100 by 2030 would be required in order to achieve the goals of the Paris Agreement.

Feedback on the survey results from power sector representatives, gathered through a focus group held in September 2020, suggested that, in their view, the carbon price should not exceed 30 yuan per tonne. State-owned enterprise leadership is concerned that if the cost impact on their businesses is excessive, it will impact on their annual performance assessment. In order to promote more trading activity in the market and incentivise companies to identify and realise more cost-effective emission abatement opportunities, the power sector instead suggests that other heavily emitting sectors should be brought into the system as soon as possible.

Eighty per cent of respondents expected China to realise President Xi’s September commitment to peak China’s carbon emissions “before 2030” (previously “around 2030”), and 36% expected China’s emissions to peak by 2025 or earlier. If the ETS is allowed to fully play its role as a cap-and-trade system, it should help China to achieve this goal. Chinese regulators can draw some confidence from international experience. The EU ETS has proven successful in driving emissions reductions in a cost-effective way. Emissions from installations covered by the ETS declined by about 35% between 2005 and 2019. The more robust carbon price realised in 2019 helped to ensure a reduction in emissions of 9% in that year, with a reduction of 15% in electricity and heat production.

The hardest part of carbon pricing is often getting it started. The moment that the Chinese government decides to increase ambition with the national ETS, it can. The mechanism is now in place, and it can be ramped up if the momentum and political will provided by President Xi’s climate ambition continues. In the coming years, this could see an absolute and decreasing cap, more sectors covered, more transparent data provision and more effective cross-government coordination. This is especially so with energy and industrial regulators who will need to see the ETS not as a threat to their turf, but as a measure with significant co-benefits for their own policy objectives.

Correction: an earlier version of this article states that emissions trading systems in the United Kingdom and Canada also adopt an intensity-based approach, when it should be more specifically “United Kingdom (during the first phase of EU ETS)” and “Alberta, Canada”.

China must boost green finance to achieve carbon neutrality by 2060

Does coal still have a role in China’s decarbonising power market?