Changes in the cryosphere – those parts of the Earth’s surface where water is solid – are regarded as one of the quickest and clearest indicators of climate change. But new research from China shows that our understanding of glaciers is still patchy.

A recent paper published in Water Resources Research by Long Di, a special researcher at the Hydrology and Water Resources Institute and the Remote Sensing Lab at Tsinghua University, used a new methodology to study glaciers at the source of the Brahmaputra. Those glaciers were found to have lost an average of 2.4 cubic kilometres of ice a year – a mere third of the rate of loss scientists believed was taking place.

“There’s no doubt the glaciers are shrinking, but the rate of shrinkage has been greatly overestimated,” said Long Di.

Long Di and colleagues developed a new two-step calibration process using satellite data to compensate for the failings of the traditional model. They combined data from the GRACE (Gravity Recovery And Climate Experiment) satellite and optical and microwave sensing data to calculate the area, depth and quality of ice and snow coverage. After including data on water flowing out of the catchment area, they calibrated hydrological models to produce more accurate figures on glacier size, snow accumulation and melting. In turn, this means that recorded changes in quantities of ice and snow are more accurate. 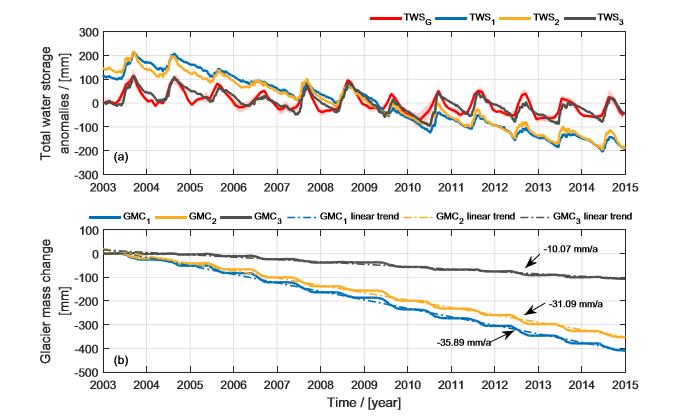 Different trends in glacier changes at the source of the Brahmaputra, obtained via different methodologies. The blue and yellow lines were obtained by earlier methods, and show loss occurring at more than three times the rate indicated by the newer research. Source: Chen, X., D. Long, Y. Hong, C. Zeng, and D. Yan (2017), Improved modelling of snow and glacier melting by a progressive two-stage calibration strategy with GRACE and multisource data, Water Resources Research

In particular, use of the GRACE satellite increased the quality of data in the research. As the mass of glaciers diminishes, they exert less gravitational pull, which is sensed by the satellite, allowing changes in glacier mass to be calculated with greater accuracy.

The new research finds glaciers are losing 2.4 cubic kilometres of ice a year – meaning that the area studied lost a total of 28.8 billion cubic metres of ice from 2003 to 2014.

Although that is only one third of the rate of loss estimated by earlier research, it is still worrying. As a point of comparison, the reservoir of the Three Gorges Dam, the world’s largest, holds 22.2 billion cubic metres of water – so since 2003 a Three Gorges reservoir worth of water has been lost.