“At the grain rain, plant your gourds and beans,” so the saying goes in China.

Marking the end of April, the “grain rain” is the sixth of China’s 24 “solar terms” and the last of spring.

The 24 solar terms are recognised as an ancient Chinese method of following the seasons, essential for helping farmers make decisions in an agrarian society.

For centuries, they have offered a system of knowledge and guided social practices based on observations of the sun's annual motion and the study of phenology. According to Chinese history, they originated over 2,000 years ago in the Yellow River Basin.

In November 2016 the system was added to United Nations Educational, Scientific and Cultural Organisation’s (UNESCO) list of Intangible Cultural Heritage.

According to a Ming dynasty (1368–1644) treatise on agriculture, the grain rain season offers warming temperatures and reasonable rainfall, which are ideal for planting.

Now that six out of every ten Chinese people live in cities, the solar terms are no longer valuable as an agricultural guide. But even if they don’t realise it, the traditions many Chinese people follow – eating dumplings at the “Winter Solstice” or sweeping tombs at “Clear and Bright” – are timed according to solar terms.

Urbanisation and the decline of traditional agricultural practices does not mean the solar terms are obsolete though, as they are already deeply embedded in China’s culture. But climate change means the solar terms are becoming less and less accurate.

By observing and recording the passage of the sun through the sky, the ancient Chinese divided its path into 24 parts, each lasting 15 days (one solar term). These were associated with changes in temperature and rainfall and the behaviour of animals and plants. Originating on the lower reaches of the Yellow River, the practice spread throughout China, so the story goes. 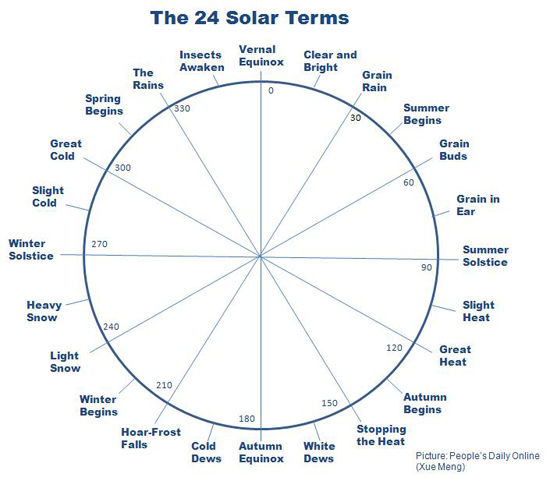 Each term comes with a saying. “Insects Awakening” means it’s time to plough. “Grain Full” that it’s too early to harvest, and “Grain In Ear” too late. Historically, the solar terms provided real guidance on planting, irrigation, fertilising and harvesting.

But global warming means the solar terms and the phenomena they are aligned with are drifting apart.

Research by Qian Cheng and others at the Chinese Institute of Atmospheric Physics, part of the Chinese Academy of Sciences, has found that the overall warming trend means that annual temperatures have increased significantly.

The seasons overall have become warmer. Spring and summer terms occur earlier, and ones in autumn and winter occur later.

The number of days meeting the temperature condition for “A Bit Frigid” and “Most Frigid” (which have average temperatures of no more than 3.5C) are decreasing.

The solar terms hark back to a time when traditional wisdom helped farmers act in accordance with the climate’s natural rhythms. But the impact of human activity has interfered with those rhythms. The question now is what significance the solar terms will have in the Anthropocene era.