The enormous potential of publicly available environmental data (PAED) is being taken more seriously by policymakers worldwide. The role that this information could play in green finance has recently drawn attention from the G20 Green Finance Study Group and will be a focus of its research this year.

Financial bodies will need one or more hypothetical future scenarios to carry out environmental stress tests – and constructing those will require reference to PAED, such as quantified policy targets and environmental carrying capacities. In the past China focused on the release of environmental data by businesses, but overlooked PAED – meaning it became like “buried treasure”. That treasure is now being rediscovered.

China has been experimenting with the use of PAED in green finance for twenty years now. This process could be described as having four stages. The first was characterised by an absence of data; the government held some data but was unwilling to share it.

The second was one of sharing in which the government and other bodies (including NGOs) shared some or all of the data but mostly in its raw form. This data had some value and financial bodies would sometimes use it but it was not in a convenient form.

The third stage was one of structured presentation in which data was provided in a more structured and user-friendly way that was more convenient for financial bodies to use. Examples include providing grade or ranking data.

The fourth stage is one in which PAED feeds back into company costs and the full value of environmental data is extracted. 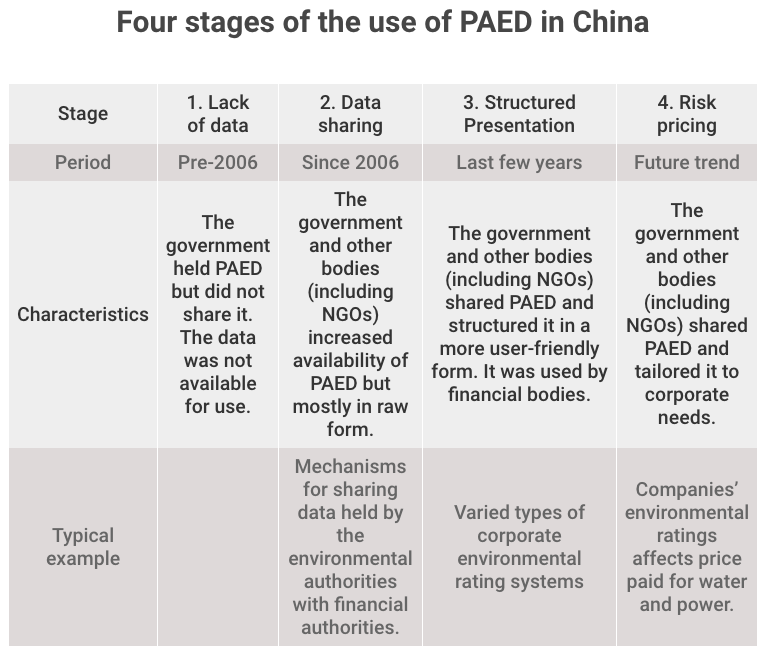 Before freedom of information rules came into effect in 2007, government bodies were not inclined to release data so very little was made public, particularly on pollution released by businesses, and breaches of regulation. Only some aggregated data was presented in, for example, the China Environment Yearbook.

The situation improved when the government strengthened freedom of information rules, a process which was also speeded up by the spread of internet use. This was shown in the amount of information available to society as a whole, or being shared in specific circles.

A year later SEPA, the People’s Bank of China and the China Banking Regulatory Commission issued a document on implementing environmental measures in order to avoid credit risks, requiring close cooperation and information sharing between environmental and financial authorities at all levels. These policies were the start of PAED sharing mechanisms in China, meaning information could be consulted by commercial banks and other bodies to limit or end lending to polluting firms.

It is worth noting though that the Institute of Public and Environmental Affairs (IPE), an environmental NGO, was founded in this period, in 2006. The earliest work of the IPE included gathering available data on corporate breaches of environmental rules to create a map of water pollution in China. Much of that data was published by the environmental authorities or in media reports. Without publication of information by the government the IPE’s map would have been blank. 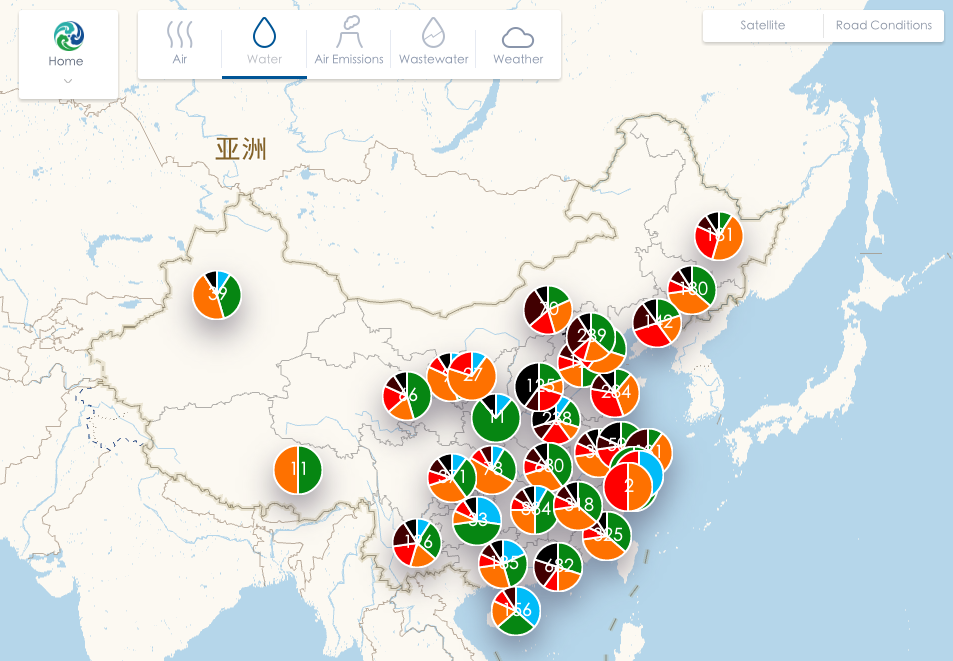 The sharing of environmental data by the environmental authorities has played a hugely positive role in the development of green finance, and in particular in green lending by commercial banks. But there are also challenges. The information shared is primarily lists of companies guilty of breaches of environmental law – the data is commonly referred to as a blacklist. But the data often lacks information on the gravity of the breach and is purely negative. Problematic companies can be filtered out, but there is no way to identify the companies that are doing well. Sometimes financial bodies acquire the information but lack the specialists to interpret and apply it.

To solve these issues the environmental authorities in some provinces have tried a new approach in recent years: structuring data in easily comprehensible ways. For example, in Jiangsu a corporate environmental rating system is used, with companies rated as green, blue, yellow, red or black. Financial bodies can treat companies accordingly, encouraging lending to green or blue companies, monitoring existing loans to yellow firms, and calling in loans to red or black ones. Some provinces make it even simpler, with only green, yellow and red ratings.

The IPE has experimented with different ways of structuring PAED, initially in its work on green supply chains, with a Corporate Information Transparency Index (CITI) that leveraged the power of major brands to improve the environmental performance of manufacturing firms. In 2015 the IPE ranked market-listed firms on their performance on pollution, by analysing online pollutant monitoring data. Those in breach of limits were ranked by severity, indirectly applying pressure via the capital markets.

The shift from the sharing of raw data to the presentation of structured information reduces the costs for financial bodies using PAED and so increases demand and results in much greater use. But making the best use of PAED requires linking the data with company operating costs. Again, Jiangsu is taking the lead here – a company’s rating on the five-colour scale directly affect the price it pays for water and power, with firms classed as red or black paying 0.6 yuan or one yuan more per tonne of water. This has a real impact, meaning financial bodies will pay even more attention to environmental data and incorporate it into risk assessments and pricing.

For policymakers at the local or national level, the full use of PAED can promote the development of green finance. The government should refer to the four stages described above and move through these as it promotes the sharing and then structuring of environmental data, on to its inclusion in pricing mechanisms, and ultimately achieving a complete social and economic green transition.

Originally published on China Finance News, edited and reprinted by chinadialogue with permission