The European Union has presented a proposal for annual greenhouse gas reduction targets from 2021-2030 for the transport, buildings, agriculture, waste, land-use and forestry sectors.

Around 45% of the bloc’s emissions – from power and industry – are already covered by the EU Emissions Trading System, which is presently being updated with a 2030 goal. The new proposal covers the remaining sectors of the economy, giving an overall goal of a 40% EU-wide reduction from 1990 levels by 2030. 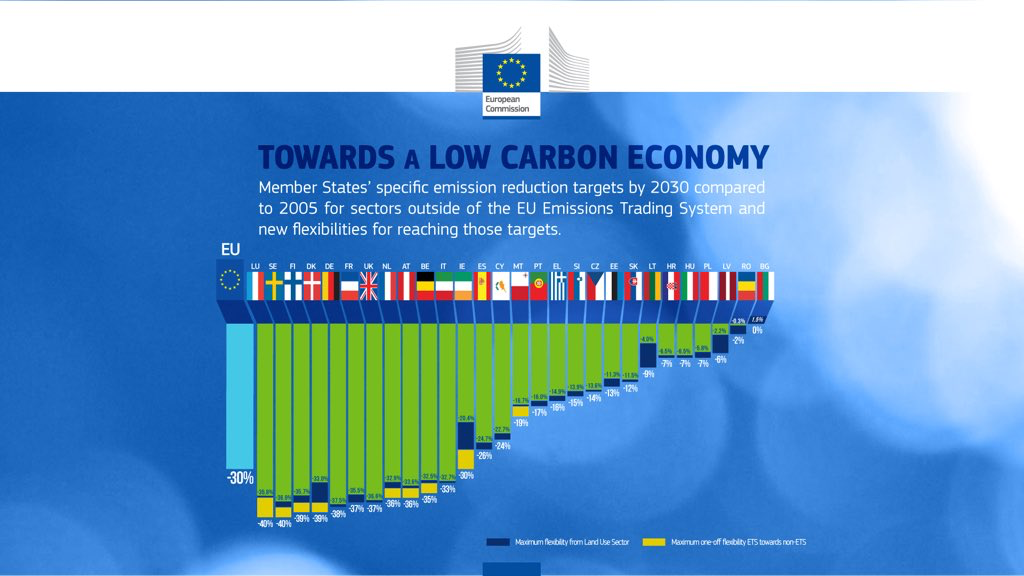 The new proposed goals, and the mechanisms to achieve them, owe a lot to the experience of the Kyoto Protocol, as well as the bloc’s own emissions trading system and already, some of the proposals have drawn fire from environmental groups as well as member states.

EU heads of state agreed the overall climate goals in 2014, and the European Commission (the EU's executive arm) has spent the last 18 months negotiating with member states over how these non-ETS reductions should be shared out among the Union.

Now that the draft for the so-called Effort Sharing Regulation has been tabled, observers expect a long round of horse-trading among nations before final targets are agreed. The draft document already reflects a number of concessions to individual countries that are aimed at speeding up acceptance of the package.

The EC proposes that countries will take on individual reduction goals ranging from a 40% cut from 2005 levels for Sweden, which has lots of renewable energy and strong ambition on carbon cuts, to a zero reduction for Bulgaria, where the country has been struggling to upgrade infrastructure and become less reliant on imported Russian gas.

The proposal is considerably more complex than its predecessor which covered the period from 2013 to 2020, reflecting the need to balance growing ambition with the capabilities of countries that have very different economic strengths.

The individual country targets are based primarily on GDP per capita, which places much of the burden on the most advanced economies such as Germany, France and the UK. And already, Poland has complained that its goal is too tough.

An environment ministry statement called the country’s proposed 7% reduction target an “inconvenience”, adding that “the country cannot afford to take such a big effort reduction”.

However, the EC has come up with some mechanisms to offer even the wealthiest countries some flexibility in how they achieve those targets.

The first is the inclusion of the land-use sector for the first time. By adding a quota for each nation covering reductions through carbon sinks, governments will get some leeway in achieving their goals if they find that outright cuts elsewhere are difficult to achieve.

This proposal for banking and borrowing of emissions mimics the rules of country-level emissions trading under the Kyoto Protocol as well as the EU ETS.

However, with this carrot, comes a large stick. Any accumulated surplus credits from the 2013-2020 phase are to be cancelled. Thomson Reuters Point Carbon estimates this could represent as much as 1.5 billion tonnes of allowances, and affect countries such as Italy, France and Spain in particular.

A third new development creates a link between the so-called “non-trading” sectors of the economy and those covered by the EU ETS. Under the EC proposal, nine EU nations including Sweden, the Netherlands and Ireland are also given the opportunity to offset a total of 100 million tonnes of non-ETS emissions by cancelling the equivalent number of EU Allowances from their ETS sectors.

According to the commission, these nine states are bearing a greater share of the overall reduction; the use of EUAs to offset some of their “non-trading” emissions offers flexibility, and also conveniently helps reduce some of the surplus of allowances in the market, currently estimated at as much as 2 billion tonnes.

The overall impact of these flexibility mechanisms is to lighten the load on some countries.

Environmental groups have expressed concern that the Effort-Sharing Directive doesn’t align Europe with the goals set out in the Paris Agreement. An EU-wide 40% cut from 2005 levels by 2030 may sound ambitious in itself, but this should be seen in the light of the bloc’s target for 2050, which is to cut emissions by 90-95%.

The Sandbag environmental group says that a 50% reduction target is well within Europe’s reach, and calculates that the proposed “flexibilities” may not even require countries to make any reductions.

“Collectively, these flexibilities would add 420 million tonnes of CO2e to the total budget and would mean that there is no need for Europe to reduce its emissions as a whole,” Sandbag’s Phil MacDonald said. “The new Member State loophole adds 39 million tonnes, the ETS flexibility adds 100 million tonnes and [land-use] adds 280 million tonnes.”

The proposal also explicitly includes the United Kingdom, and gives that country a 37% reduction target for the period from 2021 to 2030. However, with negotiations on the UK’s withdrawal from the EU likely to start in 2017, “Brexit” may require the Commission to recalculate the overall goal.

This will create a dilemma for the EU: since the UK has traditionally been one of the more progressive members on climate issues, and has taken on some of the more ambitious goals, how should it distribute the UK’s burden among other member states?

The choice may end up being a combination of distributing the UK’s target among remaining member states, according to respective capabilities, and adding some additional flexibilities that make the new targets easier for the relatively more vulnerable economies to achieve.

The Effort Sharing Regulation will require considerable negotiating skill on the part of the EC if it’s to survive the twin pressures of Brexit and EU member state negotiations.

Will ‘energy union’ help the EU deliver its climate commitments?

How Nordic nations are leading on climate action