Ahead of the high-level signing ceremony for the Paris Agreement, which opens on 22 April for signature in New  York, attention has been turning to progress in terms of ratification and entry into force of the Agreement.

A little bit of fuss (see also here) has also been kicked up by a memo from think-tank Third World Network, which urges developing countries to "wait this year" and not "rush into signing" the Paris Agreement.

Their memo presents a series of arguments for doing so, namely in terms of maintaining ‘political leverage’ in interim negotiations prior to entry into force, where outstanding issues from the Paris conference are still to be agreed:

“Not signing now keeps the pressure up on developed countries to deliver on their promises and to leverage the outcomes and positions that are vital for developing countries in meeting their obligations under the PA.”

It’s an interesting and important point, evoking memories of the long-delayed entry into force of the Kyoto Protocol, which after US withdrawal, depended on Russian ratification, which was not finalised until November 2004, three years after the conclusion of the Marrakesh Accords and seven after the Protocol itself.

Russia’s delayed ratification had a fairly straightforward strategic logic, namely in its linkage to European support for Russia’s World Trade Organisation membership. Indeed, adoption of the Marrakesh Accords was itself dependent on other industrialised countries naming their price for ratification, as the Earth Negotiations Bulletin recounts:

“In the knowledge that their participation was essential for entry into force of the Protocol, the Russian Federation, Japan, Australia, and Canada used this leverage – both collectively and individually – to drive down the “price” of ratification. Playing the ratification card on a number of occasions, they sought to weaken the compliance system, lower the eligibility requirements for mechanisms, undermine opportunities for public participation and transparency, and minimise requirements for providing information on sinks.”

Accordingly, non-ratification as a tool to secure bargaining leverage should be a fairly unsurprising situation.

After Paris, there is still a rather long list of ‘to-dos’, as this list from the UNFCCC Secretariat details.

In addition, there are a series of ongoing processes under the regular Convention institutions, as well as the parallel progress of the Green Climate Fund’s capitalisation and disbursement processes.

Some of the work resulting from COP 21 has been delegated to a new sub-group of the UNFCCC, the Ad Hoc Working Group on the Paris Agreement (APA), and the TWN memo notes the selection of officers (and the system of doing so) at the upcoming May UNFCCC session as one of its first tasks, which is always politically contentious.

The TWN memo also goes on to cite specific pending forthcoming deadlines on loss and damage, technology transfer and the provision of finance by developed countries.

As a result, an interesting guidepost might be to look at the pattern and speed of ratifications experienced with the Kyoto Protocol. 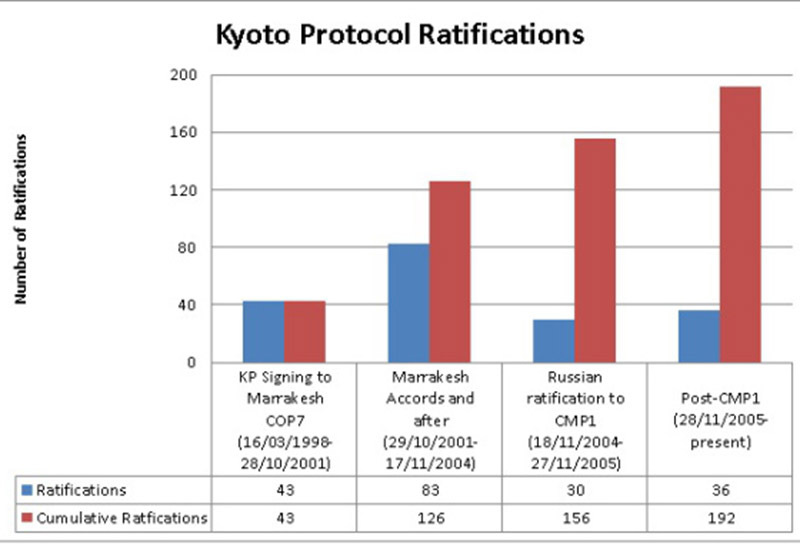 This division in the sequencing of KP ratifications leads to a few observations, which may be of relevance today:

1 – A sizeable number of countries ratified the KP prior to Marrakesh (43) – but twice this number (83) signed the KP during the year from 1998-1999 that it was open for signature in New York.

Signatures are a signal of intent, but ratifications are what matter. The 55th ratification (one of two thresholds to bring the KP into force) did not take place until mid-2002, and signatories to the KP included four countries that were to cause a lot of later grief to the KP’s fortunes: the US, Canada, Russia and Australia. (Incidentally, the first countries to ratify the KP were small, vulnerable ones (Fiji, Antigua and Barbuda, and Tuvalu), much like the first ones to ratify the PA – Fiji, Palau and the Marshall islands).

2 – Most ratifications came between 2001 and 2004, i.e. after the Marrakesh Accords were concluded (and of these, most were made in 2002, immediately following Marrakesh). This makes broad sense, because Marrakesh was the point at which many uncertain issues were finally resolved, especially surrounding the KP’s accounting rules, calculations for land-use, and the Clean Development Mechanism.

Now, of the numerous elements outstanding from Paris, those related to the new market mechanisms and transparency stand out as being the most contentious that will take more than one negotiating session to resolve. I find it hard to imagine that in particular, those countries that have indicated a use for international market mechanisms in their INDC/NDC pledges will ratify the PA prior to gaining substantial clarity over these new mechanisms.

3 – A sizeable number of countries (30) ratified in the one year between the Russian ratification and CMP1/COP11 in Montreal in 2005 (of which noteworthy ratifications included Saudi Arabia, Venezuela, the UAE, Kuwait and Iran). The obvious explanation is that the particular timing of this was in order to participate fully in the CMP as Parties to the Protocol, which they would not have been able to do so otherwise.

I would expect that the TWN ‘wait and see’ advice on signing the Paris Agreement would change in the (what I think is unlikely) event of the Paris Agreement entering into force within the next year. This would be in order to be full Parties to the PA when its first Meeting of Parties convenes, because any bargaining leverage that ensues from withheld ratification would no longer exist. 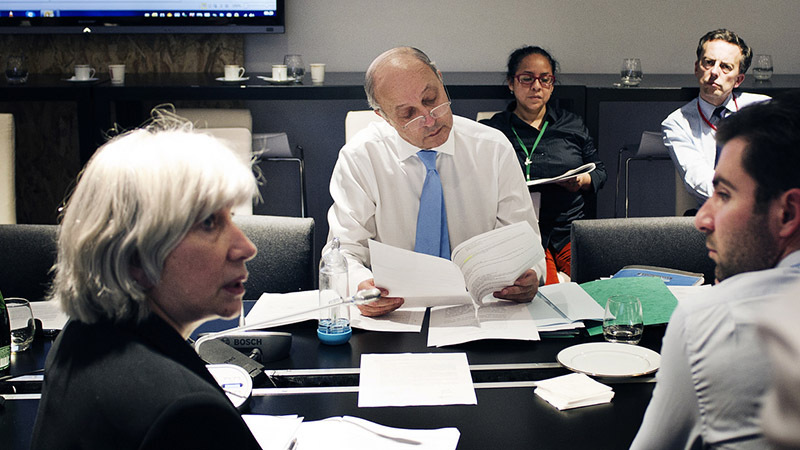 Tubiana and Fabius consult with UN officials after the publication of a final text (Pic: COP21/Flickr)

Of course, the past is not the future, and the purpose of the Paris Agreement is, after all, to establish a new political framework different to that of the past and enable action with far greater urgency than hitherto seen.

In recent days, the US and China jointly announced their intention to sign the PA at the April 22 signing ceremony, followed by India (although its minister was quoted as saying ‘ratify’). All of the above of what I’ve said may be proved wrong very shortly.

But while the signing ceremony matters as a political event, for a collective high-level reaffirmation of the commitments made in Paris and to maintain the sense of momentum, I can’t help but think that it is a bit of a red herring.

What ultimately matters for entry into force of the Paris Agreement is ratifications, not signatures. Rather than getting all excited about its entry into force (even this year), the slow progress in ratifying the KP’s Doha Amendment – now approaching four years since adoption – should also provide a cautionary experience.

Ratification is not just a procedural exercise, and the TWN memo usefully highlights the substantive hurdles that are still there to be negotiated in fully elaborating the Paris climate architecture.

How much money does China need to finance its green revolution?

China and US agree to sign the Paris Agreement

World would likely need geoengineering to meet Paris targets, but what are the risks?