Yu Xiaogang is one of China’s leading environmentalists. He is director of Green Watershed, an NGO in south-west China’s Yunnan province, where he has been working to protect the environment for over 20 years. Yunnan sits in the eastern foothills of the Himalayas and harbours 50% of the country’s biodiversity and the headwaters of six major rivers, including the Lancang (Mekong ) and Nu (Salween) are located there.

In December at COP21 in Paris, Green Watershed was awarded the UN’s prestigious Equator Prize for their conservation initiatives with indigenous groups in the Lashihai watershed –  an internationally important wetland and nature reserve in northern Yunnan. He spoke to chinadialogue about his work. 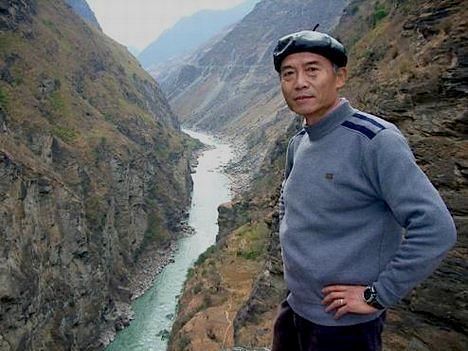 chinadialogue (CD): Can you tell us about the origins of Green Watershed?

Yu Xiaogang (YXG): Green watershed began in 1998, when a dam project displaced the indigenous people who lived around Lashihai and the surrounding mountains. The dam flooded farmland and disrupted local agriculture and so people began overfishing the river in order to survive. We wanted to collaborate with the indigenous Naxi and Yi people on regional environmental protection.

CD: What is the role of minority groups in local environmental protection?

YXG: In the watershed of Lashihai Mountain there are two main minorities: the Naxi who live by the river and a small number of Yi who live in the mountains. The indigenous people in this region prioritise protecting both their own culture and natural systems. In the mountains, we work with the Yi minority to protect the forests. Our work with the Naxi minority includes education on sustainable fishing and water conservation. One of our biggest challenges has been to create a system of sustainable agriculture that the local communities can manage independently and jointly protect the entire watershed.

The Naxi people depend on the Yi to protect the forests in the mountains so that the lower reaches of the river remain healthy. We always involve the Yi because the forests play such a crucial role in the protection of the whole watershed.

YXG: Everyone living in the Lashihai watershed benefits from its protection. People living in the ancient city of Lijiang downstream [one of the region’s most popular tourist spots] enjoy the water flowing under its beautiful bridges, and the tourist income that creates. The Naxi people in the village of Xihu have built silt dams to stop soil erosion, planted forests, set up household methane biodigesters and developed agroforestry. The average income there is now 20,000 yuan (USD 3,090). The Lashihai Fishery Association set up a system for removing illegal nets so the fish stocks and the jobs that rely on them are now safe. The Lashihai fish are now sold as a delicacy in Lijiang. The irrigation association set up successfully negotiated the area’s six-year drought, ensuring the harvests of grains and fruits and the associated income. Yi villages upstream are planting Chinese medicine crops and keeping livestock and developing ecotourism – using diverse sources of income to ensure resilience against natural and market risks.

YXG: Sometimes there are floods, and sometimes the weather suddenly turns bitterly cold with big snow storms. We didn’t have this type of extreme weather in the past. During these disasters, local people lose their crops and their animals die. We have created natural disaster response plans for the local people.

Last year for example there was an unexpected forest fire, but because this village was already prepared they were able to control the fire. There are many types of climate disasters affecting this region including droughts, floods, forest fires and extreme cold weather resulting in hunger and poverty.

Our work also makes use of local traditional knowledge. The Naxi water management group we supported came up with a way to use traditional water allocation methods to distribute water fairly and ensure fields and orchards were irrigated during drought. The Naxi people of Xihu used traditional agroforestry and ecological planting to halt soil erosion and reduce sedimentation of the Lashihai wetlands – both protecting an internationally important wetland and migratory birds, and increasing incomes tenfold. These projects were all part of local climate change adaptation and mitigation, but also increased incomes and ability to manage resources.

CD: How did you go from working in anthropology to environmental protection?

YXG: During my fieldwork as an anthropologist, I learned a lot about local knowledge, including traditional environmental protection. Others can learn from this knowledge as well. But we also felt that these communities needed support, and so we applied for grants to support them.

CD: Can these experiences be repeated elsewhere?

YXG: What we did is straightforward and could be replicated in lots of communities. The Ministry of Civil Affairs named the Yi mountain areas as a model disaster reduction community and the experience of both reducing disasters and protecting nature has been applied in disaster zones in Gansu and Sichuan. Last year the State Council Poverty Relief Office visited the Yi village of Boduoluo and it is now a case study used by the Asia Development Bank in China and elsewhere.

CD: What problems did you encounter in your project, and how were these dealt with?

XYG: It’s impossible for everything to go smoothly. Over the years the Xihu villagers learnt how to resist developers coming in from outside to lease land; and the Yi resisted plans to relocate them as “ecological migrants”. The village of Lashihai abandoned plans for an eco-resort said to cost 8 billion yuan, which would have affected the entire watershed. We did our best to meet both government and community expectations: for the protection of resources, social justice, GDP growth and improvements in living standards. That brought us legitimacy, credibility and support.

CD: What does receiving the Equator Prize mean to you?

XYG: We feel like this prize is not only for our work, but also for the work of all the minority communities in this region and their contribution to forest protection. When we first started doing this type of work, we didn’t realise that many minority communities face similar types of problems.

Stemming the tide of rural-urban migration