The clock is ticking for ministers meeting in Paris this week. They are charged with setting new and improved finance targets that meet the needs of developing and developed nations alike.

Campaigners and commentators argue that unless a package emerges soon, the odds of striking a deal to prevent global temperatures rising over 2C will diminish.

“Climate funding is the glue that will make the Paris agreement stick. It will be the difference between a minimalist agreement and one that starts to deliver for the world’s poorest people,” said Celine Charveriat, head of advocacy and campaigns at Oxfam, in a statement this morning.

However, this figure is disputed – some say up to US$60 billion – and a new timeline of climate funding announcements to emerge from Paris, released today by the United National Framework Convention on Climate Change (UNFCCC), suggest it could be even higher.

A week of discourse has yielded unequivocal funding pledges from upwards of 24 countries, six multilateral development banks and two multilateral funds, according to the UNCCC who are compiling a timeline of declarations (click the image below to see the infographic). 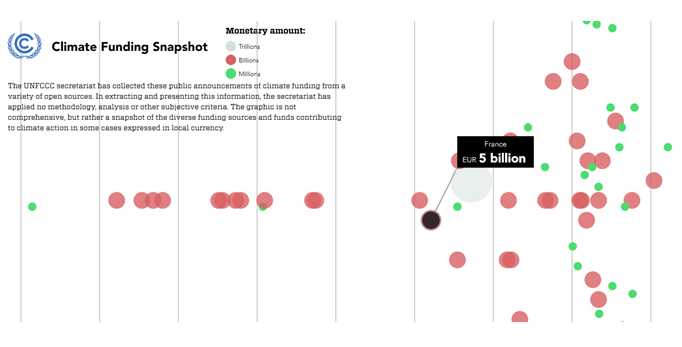 According to Nick Nuttall, a spokesperson for the UNFCCC: “Further analysis will be needed on methodologies and other parameters, to fully understand the magnitude of these flows in respect to developing country support, and the pledged $100 billion by 2020. But it is our impression that the overall direction appears positive."

At this halfway point there is a good indication of where the big funding will come from.

Of the southern European states, who have struggled with recession and joblessness in recent years, Italy announced that it will increase its support for international climate finance to a minimum of US$4 billion (25.6 billion yuan) between 2015-2020.

Spain aims to double its international climate finance by 2020 compared to 2014, by mobilising €900 million (6.3 billion yuan).

Across the Atlantic, new Canadian prime minister Justin Trudeau will provide CAD$2.65 billion (12.6 billion yuan) over the next five years in international climate finance to support a transition to low-carbon economies.

In Asia, Japan will provide Yen 1.3 trillion (7 billion yuan) of public and private climate finance by 2020, to developing countries, 1.3 times up from the current level. Announcements from China and the US have not yet been compiled.

Finally, the World Bank Group has pledged a one-third increase in climate financing by 2020. This means reaching US$16 billion (103 billion yuan) a year in public finance.

"Before and during COP21 a whole range of funding announcements have been made from governments to multilateral development banks and even cities like Paris and regions such as Quebec," said Mr Nuttall.

How to pay for low-carbon development