Skip to content
China’s negotiating strategy at UN climate talks has evolved considerably in the past 20 years. Formerly defensive, the world’s largest emitter and second-largest economy is increasingly co-operative in climate diplomacy as it becomes more accepting of its responsibility to cut emissions.
China’s status as a developing nation has become increasingly fluid as the country becomes richer and more closely engaged with the global financial system, although it still acts as a cheerleader for developing nations seeking concessions on climate finance and deep emissions cuts from rich countries.
In 1992 China’s per-capita GDP stood at only US$419, while total energy consumption was the equivalent of 1.09 billion tonnes of coal equivalent (tce). By 2014 per-capita GDP had risen to US$7,485 and total energy consumption to equivalent of 3.75 billion tonnes in 2007, when it became the world’s largest emitter of greenhouse gases (GHGs) and since then emissions have continued to rocket.
China’s emissions currently far outstrip those of the US, the second largest emitter, and the EU (see Figure 1). Although in per-capita terms China’s emissions are only slightly higher than the world average, the country has been under strong pressure to act, from other major emitters such as the US and EU on one hand, and the most vulnerable countries on the other. 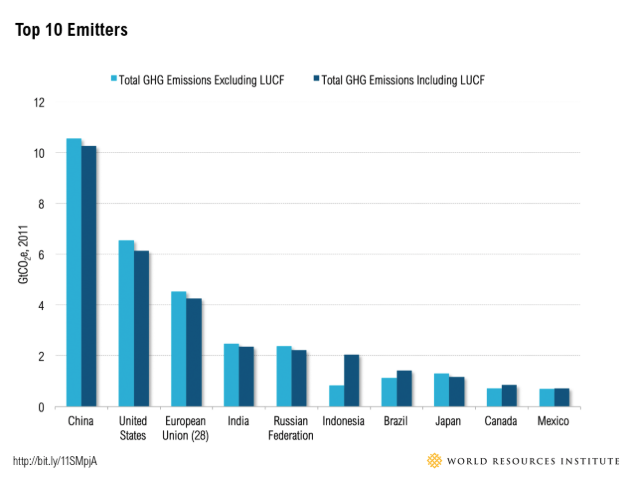 2005: China comes under pressure to act

Since 2005, one of the main focus of UN climate talks has been to get the US and China to take on emissions cuts, as neither country was covered by the 1997 Kyoto Protocol (the US refused to ratify it and China wasn’t covered because of its classification as a developing country). From the outset of negotiations to find a successor to the Kyoto Protocol, China adopted a tough negotiating position and joined with the G77, a coalition of developing nations, to form a G77+China group.

The make-up of the G77 is varied – it includes major developing nations, small Latin American and Asian countries, and oil exporters. China, as the largest emitter among developing nations, stayed in step with the G77 on major issues, citing the UNFCCC principle of common but differentiated responsibilities (CBDR). During this process the developing nations stressed historical responsibility. During the last few centuries the industrialised world grew steadily richer by burning coal, oil and gas, and thus are required to shoulder most of the burden of emissions cuts (see Figure 2).
But rich countries insisted that developing countries, who have accounted for a growing share of the world’s energy use over the last decade, should take on a bigger share of emissions cuts in the future. 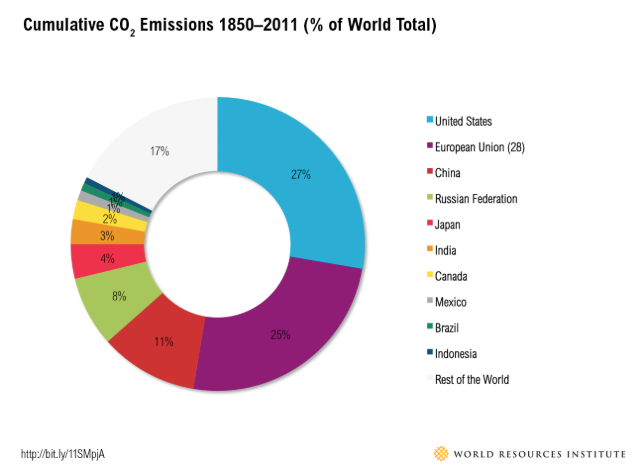 After two years of stalemate, a modest breakthrough was made at the 2007 UN climate talks in Bali, where it was agreed that all developing and developed nations (including the US) would negotiate on post-2012 mitigation, adaptation, funding, and technology transfer under the UNFCCC.

Meanwhile the UNFCCC track talks were slow – the overall structure was in place, but it was a largely empty vessel. China and other developing nations maintained there could only be real progress on long-term cooperation if nations within the Kyoto Protocol stepped forward with unconditional commitments. The stalemate just broken reappeared once more.

That same year Dutch researchers announced that China had overtaken those of the US, making China the world’s largest emitter.
2009: Acrimony in Copenhagen
References to the G2, China and the US, started to appear, and with the election of Barack Obama, a supporter of action on climate change, hopes rose that the two nations might work together on the issue and help break the deadlock at the Copenhagen climate summit in Copenhagen.
But despite all the fanfare, there was little real progress in the Danish capital. Ultimately a draft of a comprehensive Copenhagen agreement was not adopted, and had no legal force. The summit was also disabled by major differences between developed nations and developing nations, including China, on proposed emission targets for 2050.
China was surprised to be blamed in international media for the failure to reach a deal on 2050 targets, but in the end this has a profound impact on the country’s subsequent approach to future talks.
2011: Active diplomacy and Durban Platform
In Cancun the following year the back and forth battle continued. The developed nations called for a re-categorisation of developing countries, something the developing countries themselves fiercely opposed, and which observers regarded as an attempt to divide the developing nations. In the end the conference passed the Cancun Agreement, which retained the two-track approach but with the talks under the Kyoto Protocol further weakened.
In 2011, in Durban, developed nations officially started talks on post-2020 climate cuts and after much tough negotiation, a decision to form the Ad Hoc Working Group on the Durban Platform for Enhanced Action was passed. This was now a third negotiating track, which was tasked to come up with a protocol or other legal outcome binding on all parties to the UNFCCC by 2015.
The Durban Platform became the venue for discussion on post-2020 emission targets. and the commitment made by developed nations at Copenhagen to be transferring US$100 billion in climate funding to the developing world by 2020. For the developing world this was a test of the developed nations’ sincerity.
2011-2015: China’s bilateral partnerships
Although national groupings were becoming less defined, the continuing existence of political blocs meant continued deadlock between the developed and developing nations. Progress on the Durban Platform was slow. In broad terms, richer countries wanted to build new and less restrictive processes, while developing country blocs wanted to focus on ‘fairness’ and historical emissions, and to protect the principle of common but differentiated responsibilities.
By then, China has already started to take action on climate change outside of the UN process. The country already had a long history of cooperation with the EU, particularly on renewable energy, but it was with the US that bilateral relations on climate and energy policy blossomed. Although the US had for years harried China during negotiations on increasing transparency and verification of data, curbing climate change became an essential part of the relationship between the two powers, and progress made away from the UN negotiating tables eventually helped to improve the atmosphere.
The US and China have issued joint statements on climate change after before summits in both of the last two years. In 2014, China committed to reaching peak carbon emissions in 2030, and set carbon intensity targets (a 60% reduction by 2030 on a 2005 baseline) and draws 20% of energy from renewable sources by 2030. This year, China committed to providing CNY 20 billion (US$3.2 billion) in climate funding to developing nations – a level of provision on a par with the developed nations.
And on November 19, in the run-up to the Paris talks, Xie Zhenhua, China’s lead negotiator and special representative on climate change, said China hopes to see an ambitious and binding agreement reached in Paris. This ran counter to longstanding international opinion, which expected China to take a conservative stance.
Post-Paris and decarbonisation?
At the Cancun climate change talks in 2010, 196 counties agreed that the global average temperature rise by the end of the century should be limited to 2C, or possibly a tougher target of 1.5C.
But for years negotiations have failed to implement the necessary measures. On June 30 this year China submitted its Intended Nationally Determined Contribution (INDC), part of the Durban Platform process. To date, around 170 INDCs have been submitted, which combined still leaves the world 0.7C – 1.2C away from the 2C target. Therefore Paris talks are under pressure to put in place both quantified long-term emission targets with specific deadlines and a system of assessing INDCs every five years, starting before 2030.
China and most other large emitters now acknowledge that responding to climate change requires major changes to the world’s fossil-fuel dependent energy system.
As a report from a national climate think tank on China’s route to long-term emissions cuts has put it: “We no longer regard responding to climate change as purely a cost, we now see it as an opportunity to help China enjoy better growth, a better environment, and better energy infrastructure.”
The last decade has seen the start of China’s efforts to save energy and reduce emissions. China is now by far the biggest user of renewable energy and energy saving, but an investment-led economy is bound to rely on energy-intensive industrial products. Future emissions cuts will rely on a more diversified economy that is reliant on wasteful extractive and energy-intensive industries. Such a transition, assisted by policies to expand the share of low-carbon technology, can help China deliver on a promised peak in emissions and the future cuts in carbon necessary to stave off runaway climate change.

The obstacle-strewn path to Paris