This article was published originally on the website of GlobalCapital, a leading news, opinion and data service for people and institutions using and working in the international capital markets.

Finance is set to play a key part in the fight against climate change. But with the crucial Paris Summit just weeks away, climate finance is a mess.

With a few honourable exceptions, countries are doing far less than they should. Yet there is no mechanism for correcting the shirkers.

The multilateral development banks are doing what they can — but without fresh capital, they can only divert funds from other needy causes.

A thorough shake-up is badly needed, but it will involve painful political battles.

Investment in green technology is accelerating, but not nearly fast enough to curb climate change, and not much of it is going to the poorest countries. They have done the least to cause global warming, but are already suffering worst from its effects, such as rising sea levels and extreme weather.

The world has an engine to address that, but it remains parked in a field, choked in weeds.

At the Copenhagen summit in 2009, when states failed to reach agreement to cut emissions, they had to have something to show for the meeting.

So the developed countries promised that by 2020 — a nice, far-off date — they would be “mobilising” US$100 billion a year to developing countries, to help them mitigate (i.e. slow) and adapt to climate change. The amount was supposed to ramp up between 2009 and 2020.

Six years on, you might think the rich countries would have worked out a formula for how much each country was supposed to pay, and decided what counted and what didn’t.

Now, the Paris COP 21 conference — widely seen as the world’s last chance to get a deal that begins to tackle climate change — is looming in December. The developed countries have finally realised they need to show some action on that US$100 billion promise — otherwise, the developing countries might just say “get lost” in Paris and refuse to cut their emissions.

So in July, Peru and France, the outgoing and incoming chairs of the COP process, commissioned the OECD to prepare the first official survey of how much the rich countries are actually doing on climate finance for the developing world.

The report, presented at the IMF/World Bank annual meetings in Lima on October 9, showed an average of US$57 billion a year had been committed, over 2013-14. The rhetoric from the rich countries in Lima was that this showed a “politically credible pathway” to reaching the US$100 billion in 2020.

But the developed countries deserve at best a C grade for their efforts.

First, the developing countries clearly felt they had been promised that the US$100 billion would not just be purloined from existing aid budgets. But much of what the developed countries are paying is indeed part of aid.

For example, when the UK said in 2014 that it would contribute £720m to the Green Climate Fund, a new organ set up to channel some of the Copenhagen money, it said this came “from existing funds earmarked for international climate work under the UK’s commitment for 0.7% of gross national income to overseas development assistance”.

Even more seriously, the Copenhagen text left the door open for the US$100 billion to include private sector capital flows, and without any specific limit.

The kneejerk reaction is to say “great — we need the private sector to get involved”.

Of course we do — but that is exactly why the public sector contribution needs to be as large as possible.

There is a multiplier effect. If a government or development bank puts up US$10m for a project, extra private investment can be attracted alongside.

Sometimes the public sector can shield private investors from risk; other times it can bring down the average cost of funds; and even if public and private money is lent on the same terms, the presence of a state investor gives the private sector confidence to co-invest.

Thus, the more of the US$100 billion ends up being public money, the greater, by a multiple, the overall benefit (and, incidentally, the opportunity for the private capital markets).

Bear in mind that the real amount needed to redirect the world’s economy towards low-carbon development has been estimated at US$1tr-US$5tr a year and the importance of maximising the public component becomes clear.

A third grave problem is that while the US$100 billion commitment is legally binding on the group of developed countries, there is no agreed means for how to share this out.

The result is that each is just doing what it feels it can, leading to a grossly unfair distribution of the burden, and a heavy reliance on redirecting existing budgets.

In the US$57 billion in commitments so far counted by the OECD, US$22.8 billion, or 40%, came from governments, plus US$1.6bn in export credits, mainly for renewable energy.

Multilateral development banks provided $17.9bn or 31% and the private sector US$14.7 billion in co-financing. For the MDB part, the OECD counted only the share of the banks’ efforts that is supported by developed countries’ capital, as the MDBs also have capital from developing states.

But for all the OECD’s talk of transparency, it did not publish a list of how much each country had given.

The latest figures for that refer to 2012 commitments, which totalled US$17.1bn from states and US$15.4bn from MDBs, according to the World Resources Institute.

These make depressing reading. Only Norway and France come anywhere close to pulling their weight.

Under the UN Framework Convention on Climate Change, signed in 1992 at Rio de Janeiro, 23 countries are defined as developed, and are obliged to provide financial resources to developing countries to help them mitigate and adapt to climate change.

They are the west European members of the EU, plus Norway, Switzerland, Iceland, the US, Canada, Japan, Australia and New Zealand.

For the OECD’s report, four countries – Poland, the Czech Republic, Slovakia and Slovenia –asked to be included too.

Based on the IMF’s predictions of national GDPs for 2020, one can work out a rough version of a fair distribution of the US$100bn among the 23 responsible countries.

About US$44bn a year would be needed from the US, US$9.4bn from Japan, US$7.9bn from Germany, US$7.6bn from the UK and US$5.8bn from France, leaving US$25bn for the smaller states led by Italy, Canada, Australia and Spain. This is about 0.2% of GDP for each country.

Using the World Resources Institute’s figures for 2012, which are based on what countries themselves reported, Norway was already contributing bilaterally 91% of this 2020 target, France 61%. Japan was putting in 44%, Germany 26%, the UK 10% and the US 5%.

In the run-up to Paris, several countries have pledged to increase their climate funding. France has said it will go up to US$5.6bn a year in 2020. That would mean it was contributing about its fair share of the full US$100bn, based on GDP breakdown. France also said this new money would not come out of aid.

Germany has promised to go up to US$4.5 billion — on the right track. The UK’s offer of US$2.7 billion is less impressive.

The most gaping hole remains the US, which in 2012 was contributing much less than France, though its economy is six times bigger.

Were the US to put its shoulder to the wheel, all the others would fall into line — but no other country has the clout to make the US live up to its commitments.

Countries seem to be hoping they will somehow, haphazardly, make it to US$100bn, by scraping together what they can find in various kitties, including private money and a lot from the MDBs.

In Lima, the MDBs vied with each other to announce increased targets for climate finance.

The World Bank Group, for example, said it would raise its contribution from US$10.3 billion a year now to US$16 billion in 2020. But that money is just being diverted from other purposes — since the World Bank has not been given a capital increase, and would have planned to use its capital fully anyway. It has asked for a capital increase, but said only that this will be to "support the UN’s development goals".

No one knows how much of a fight the developing countries plan to put up about finance in Paris. But they would be well within their rights to dig their heels in.

As a minimum, developing countries should insist that, by the end of 2016, developed states come up with a clear plan for what the US$100 billion will consist of, and how it will be divided among the various providers.

They would be well advised to insist that all of it is public money. More realistically, they may have to settle for a firm percentage, perhaps 70% or 80%.

They should extract a firm promise that new commitments should not come from existing aid flows.

As for the MDBs, the developing states ought to request that the supranational banks’ component in the US$100 billion be backed by fresh capital increases. If they are wise, the developed countries will see the logic of that — their money will go a lot further channelled through the efficient capital structures of the MDBs.

Finally, the developing states should insist on a hard percentage being earmarked for adaptation to climate change, rather than mitigation. It is relatively easy to get the private sector to invest in a windfarm, because it generates revenue. It is much harder to get commercial investment for a sea wall, or systems to cope with droughts.

For their part, the rich countries could argue that their number should be broadened to include such newly wealthy states as Singapore, South Korea or the Gulf states — though these have contributed much less to the emissions which cause climate change.

Resistance by the developing countries might make the meetings in Paris ugly and stressful. But climate finance is too important to be allowed to languish for much longer. 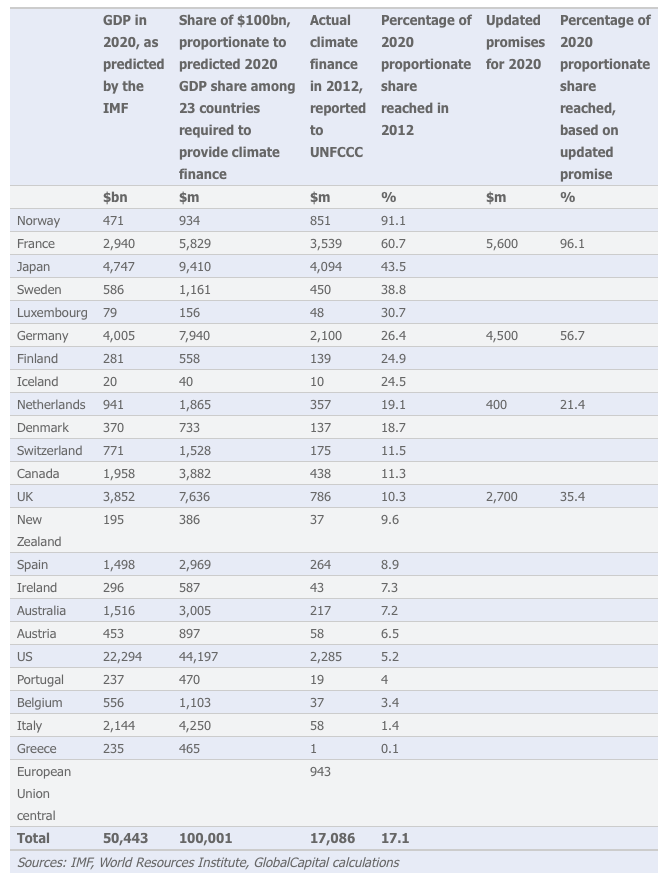 GlobalCapital’s coverage of environmental finance can be found here

Financing for resilient development: how to deal with the rising costs of climate change