Skip to content
As the roof of their home was brought crashing down in a planned demolition, Ma Guoqing and his family set off to start their new life. Ma, 31, was leaving the village of Luziwo in the northern Chinese province of Ningxia, where he lived with his parents, his wife and his son.
They knew nothing of their new home, as he’d been given only a new key and the address. So on a cold and clear December day in 2013, only two days after definite notice of relocation was issued, they set off in a large convoy of trucks hired by the government to move the villagers. They left the mountains in the south of Ningxia and headed for the plains of the north, leaving behind a village of broken old homes.
Ma and his family’s move was just one small part of plans by Ningxia officials to relocate 350,000 people. Residents are being forced to abandon their homes in an area that is becoming increasingly sandy, where the environment is fragile, rain is rare, and natural disasters frequent. 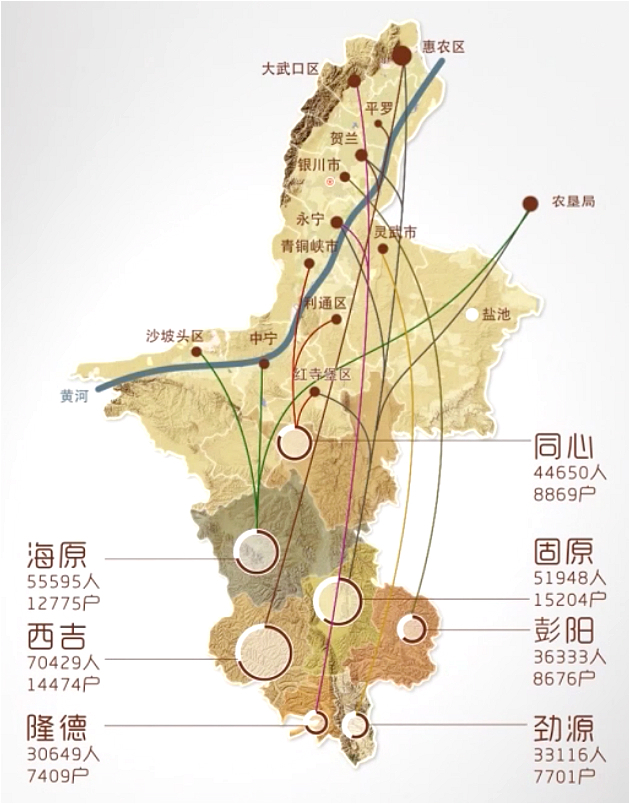 This Chinese language graphic from thepaper.cn charts the movements of villagers from arid areas of southern Ningxia to northern parts of the province

The parched loess plateau is also one of China’s poorest regions. Better known as Xihaigu, in 1972 it was named by the UN World Food Programme as one of the world’s most uninhabitable places.
Today, Xihaigu is the site of an ecological restoration scheme in which entire villages are to be emptied. When residents leave, their homes are demolished, even with neighbouring homes still occupied. Deputy head of the Ningxia Relocation Bureau, Guo Jianfan, says this new policy aims for more decisive relocations than in the past.
Authorities justify the harsh moves, saying people relocated to other areas often drift back, dividing their time between old and new homes, making it difficult to manage movements of population and restore vulnerable ecology such as grasslands.
Luziwo village is named after the reeds that grow in a hollow up in a mountain gully, where the soil is so salty crystals lie on the ground like snow. Located in Xiji county, part of Guyuan city in southern Ningxia, droughts there can last years, and new arrivals find their throats dry up and crack, just like the soil.
So how dry is it? Figures from the county meteorological bureau put the average annual rainfall at between 200 and 650 millimetres – but that is far outstripped by annual evaporation figures, of between 1,500 and 2,000 millimetres.
Access to water is the focus of village life. The first daily chore is to direct donkeys to the well and haul back water that is then stored in underground cisterns.
While younger villagers are keen to leave and escape poverty, and outsiders are unlikely to choose to live here, the area is still overpopulated.
Ma Zhongyu, former deputy head of the Ningxia Development and Reform Commission, says the south of the province can only support about 1.3 million people – compared with the 2.3 million living there currently. Overpopulation, he says, exacerbates poverty and environmental damage.
A relocation programme was launched in 2011 in order to reduce pressure on the environment as part of the 12th Five-Year Plan. Luziwo was chosen as one of the villages from which residents were relocated, moving to a village 500 kilometres north in Pingluo county, located near Miaomiao lake.
Although relocations only began in the past few years, Ningxia’s arid climate is by no means a recent phenomenon, said Wang Yiming, a professor at Ningxia University’s School of Resources and the Environment.
“The arid environment of the north-west of China started to take shape around 65 million years ago,” explained Wang. “The formation of the Himalayas greatly increased the height of the Qinghai-Tibet Plateau, and aridity increased.”
But climate change does seem to be making things worse.
Research by the Ningxia Meteorological Bureau has found average temperatures here have increased by 2.2C over the last 50 years, with droughts and other extreme weather events becoming more frequent.
That compares with an average global increase in land surface temperatures by 0.85C over the last 130 years, according to the UN’s climate science panel.
In some areas, increased temperatures can lead to more rainfall, but Ningxia’s arid conditions and impact of global warming will result in increased evaporation, so any extra precipitation will be lost, says climate expert Lin Erda.
A joint study into climate change adaptation in China, carried out in 2010 by China, the UK and Switzerland, found that agriculture in central and southern Ningxia relies on precipitation, rather than irrigation.
Climate change has seen grain yields per mu (a Chinese unit of land measurement) fall to only about 30 kilogrammes, while climate disasters are increasing crop losses.
Statistics for 2005 from the Ministry of Environmental Protection show 95% of China’s poor live in areas with extremely fragile environments – areas particularly sensitive to climate change.
He remembers that during the time of people’s communes, any land that could be cultivated was exploited, and even mountaintops were used to try to grow crops and increase harvests.
“The springs didn’t give much water to start with, and after a few years the ones high up failed and new ones had to be dug lower down.”
The Hulu river that once rose in the southern foothills of Ningxia’s Yueliang mountains is now just a dried-up riverbed.
Manager of Xiji county’s water company, Gao Yujie, blames overdevelopment and global warming. He says just 20 years ago the river was lined with trees, “I played in the river when I was a kid,” he recalled.
Parts of that dried-up river bed are now celery fields as prices for the crop have risen in the last few years, meaning the water-hungry vegetable is much more widely planted. Gao says he understands but disapproves of this choice: “Those of us who study water know this is a problem, but growing celery does increase incomes for farmers.”
The fragile environment forces more use of natural resources to increase harvests, meaning poverty, population, environment all become interlinked.

Wang Yiming explains that relocations are intended to reduce demand for natural resources – mainly water – to a sustainable level. It isn’t about retreating, Wang says, it’s a necessary compromise between humankind and nature.

And in the parts of Xiji emptied a year or more ago, alfalfa – an important source of forage for livestock – and wild grasses now sprout up into the warm air.
New homes, new problems
But life in the new villages isn’t as good as was hoped. In some cases, the new homes are smaller than those relocated villagers have left, while newer residents complain about problems with bureaucracy, farming, jobs, and other sources of income.
Fan Jianrong, a professor at the Beifang University of Nationalities, who has researched relocation of communities, finds that older villagers are the most despondent about the prospect of moving and have the biggest problems in adapting to new homes.
Guoqing’s uncle Ma Cunzi is 45, for instance, and wants to stay in Luziwo despite a final government ultimatum to leave. He even planted potatoes and wheat as soon as the weather was right.
The family’s new home is in Miaomiao Lake’s District 7. His mother, Ma Cuifang, has been here for several months, but doesn’t like to leave the village as she can’t read and doesn’t know many of the neighbours. His father, Ma Bingwu, spends his time thinking about the cows and fields he used to have.
Now, he says, he’s “useless” to the family. He rides a borrowed bike to the vegetable market, but comes home empty-handed and complaining about the prices. “It’s all more expensive here than in Xiji. It was 0.50 yuan for a kilogramme of potatoes there, and 1 yuan here!”
And it is not just older people that can’t settle here. Younger residents have become increasingly anxious about jobs and opportunities.
The town’s Party secretary’s home is full of people who come to ask about work or complain of various problems.
“The government moved us here, and now we don’t know what we’re meant to be doing,” says someone in the crowd, to general agreement.
Wang Xinglong of the Pingluo county labour and employment bureau explained that “on one hand you’ve got companies in the area that can’t find the workers they need, and on the other hand, many relocated villagers can’t secure suitable work.”
The government’s decision to cut off transport and logistical links to villagers’ original homes has caused controversy amongst academics.
Meng Huixin, a post-doctoral student at the Chinese Academy of Social Sciences’ Institute of Urban Development and the Environment, said success of the Ningxia relocation effort will be crucial for China to demonstrate capacity to adapt to climate change.
This is an edited version of the Climate Migrants article published as part of a series at Thepaper.cn

Death of the desert

Why this is a golden age for environmental journalism

Could a new treaty help millions of climate migrants?