Rising temperatures are sure to have a big impact on China’s grain output and food security over the next 20 to 50 years. My research identifies some benefits but at present the negative impacts will outweigh them, leading to lower harvests unless urgent measures are taken.

Climate change has two main positive effects on grain output; northward migration of crops and less frost damage.
By lifting average temperatures above 10°C for more of the year, climate warming has lengthened the growing season. The biggest change is being felt north of the Yangtze, particularly in the middle latitudes of the North China Plain, a major region for wheat, maize and dry-rice farming. Changes to crop distribution are taking place, as crops shift north and more land can yield two or three crops a year.

Grains go north
Over the last 50 years, climate warming has already moved crop boundaries north to varying extents. Research by China Agricultural University professor Yang Xiaoguang and others has found  boundary lines for double cropping in the provinces of Shaanxi, Shanxi, Hebei, and Liaoning and the Beijing hinterland have shifted. Furthermore, the range for wheat planting in Liaoning, Hebei, Shanxi, Shaanxi, Inner Mongolia, Ningxia and Gansu has expanded north and west to varying degrees. Benefits are visible in Hebei, where a more northerly boundary for winter wheat planting has raised yields by roughly 25% in wheat growing areas. Rice farming has also moved north – it is now possible to grow wet rice in the Yichun and Hei River areas of China’s northernmost province, Heilongjiang. 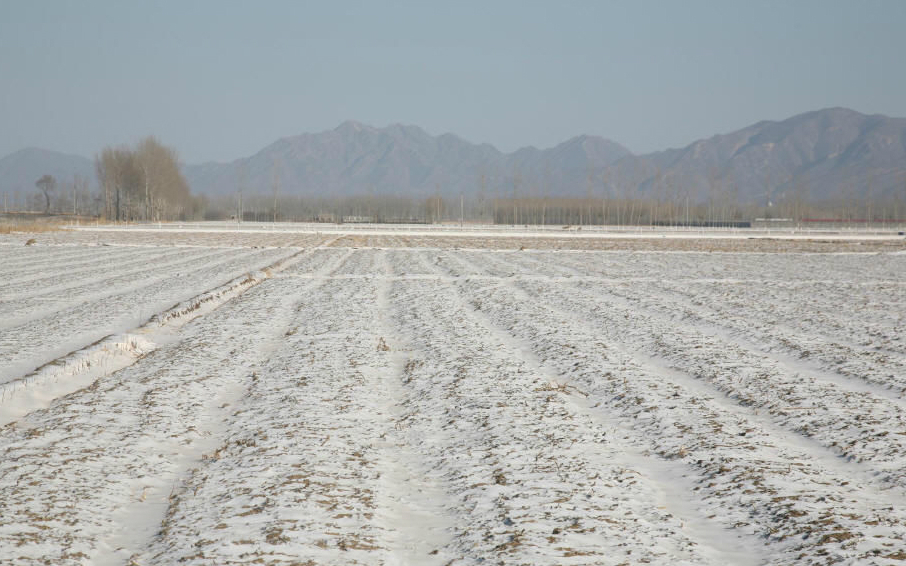 Warmer weather is also reducing frost damage to crops. Warming means the area suitable for late-maturing crops will expand. It has already resulted in significant reductions in frost damage to winter wheat, a crop that was regularly damaged by the cold from the 1950s to the early 1970s. But since the 1980s climate warming has meant fewer and milder incidences of frost damage. In fact, there have been no widespread incidences of frost damage since the mid-1980s.
However, it is not all good news. Extreme weather linked to climate change could cancel out the effect of increased yields, resulting in lower grain harvests. Chinese Academy of Agricultural Sciences researcher Xiong Wei has modelled the effects of climate change, concluding that any one of the Intergovermental Panel on Climate Change’s four scenarios would result in reduced rice harvests.
Drought and floods

When it comes to negative effects, drought is the prime culprit. China’s arid and semi-arid regions lie mainly in the north and account for about 47% of its landmass. Frequent droughts are already the main factor limiting grain production in north China. Climate expert Zhang Cunjie has predicted that total precipitation in northern China will fall over the next 10 years. Although small localized increases may take place in some years, overall north China will remain dry; there will be no near-term easing of droughts.

Meanwhile, south China will suffer crop damage from high temperatures and worsening summer droughts. Although the south enjoys plenty of precipitation, it is not evenly spread over the year, or geographically. Warming will make already common summer droughts more frequent and serious. Jiangxi, Zhejiang, Fujian and Hunan provinces have seen exceptional summer and autumn droughts in recent years; they have been sustained, rapid in onset, and caused huge reductions in grain output.

Flooding caused by heavy rain is another major risk. In recent decades, China has suffered frequent regional floods due to heavy rainfall, though uncontrolled deforestation has also played a role. Flooding has become increasingly common since the 1990s along the Yangtze, Yellow, Pearl, Songhua, Huai rivers, and in the Taihu basin. Financial losses incurred have also risen steadily.
Pests and poor food
Widespread outbreaks of pests and diseases are another problem of warmer weather as it helps them survive, breed and spread. Agricultural pests and diseases currently affect 20 billion hectares of land each year – twice the area of China’s total arable land – and cut grain output by about 9%.


Extreme weather events linked to climate change often wreck agricultural infrastructure and hamper production. Irrigation equipment on most Chinese farms is of poor quality, and tight finances mean technology is often poorly maintained, or goes unreplaced, so farmers are becoming more vulnerable to damage from floods, and other disasters.

Global climate change is bringing ever more frequent and severe weather events. Downpours, heatwaves, blizzards and frosts damage crops, and agricultural infrastructure, such as greenhouses and irrigation and drainage systems, thus hampering production.
Climate warming itself will also affect the growth and quality of crops. Without new, adaptive technologies, crops will grow faster, and will be lower quality, stripping away some of the positive effects of a longer growing season. For example if temperatures increase by 1°C, rice needs 2 weeks less to grow. One outcome, less tilling time, would mean fewer, smaller grains of rice, and a lower overall harvest. Wheat and corn would be similarly affected.
Climate warming also alters the the rice grains: the shorter growing period results in grains that are smaller, less plump, less translucent and lustrous. The ratio of high-quality rice produced will fall. Higher temperatures as grains are plumping out during the growth period causes rice to be tougher when cooked, while cooler temperatures and wider temperature ranges between day and night result in more flavor. Rice grown in higher temperatures also contains fewer nutrients.
What needs to be done
Several measures can be taken to counteract these problems. Technological improvements and crop strains that are more resistant to high temperatures, drought, floods, disease and pests are essential. More construction of agricultural infrastructure, and research and popularization of water-saving in agriculture are also needed.
As crop boundaries move north, the adoption of new crop types will increase yields to some extent. Higher temperatures will mean that double cropping can be carried out further north, and two rice crops a year could be grown in places where farmers currently plant one rice and one wheat crop. Wider application of double cropping will help increase rice harvests.
We modelled the impact of different agricultural policy scenarios and climate change on food security. We found that double rice cropping, the introduction of new crop varieties, and technological advances would result in more significant increases in national grain output. In a scenario of comprehensive adaptation to climate change, by 2020 China’s grain output will have increased by 28.6%. Growth will be seen in five grain-growing areas (not in the north-west), with particularly large increases in the north and north-east, where grain harvests as a percentage of national totals will increase from 31.1% in the base year to 39.4%.