By a pond inside one of the entrances to Beijing’s Chaoyang Park lies a cluster of one and two storey red pyramid-shaped buildings. Sculptures of Gandhi and Lincoln and other famous figures sit in the quiet woods nearby. This is Yuan Xikun’s Jin Tai Art Museum.

Yuan is a famous sculptor and painter and his works on the theme of environmental protection have become very influential. He raised funds for the Jin Tai Art Museum, which was China’s largest private art museum when it opened in 1997. It currently provides a platform for cultural exchange with other countries.

Yuan grew up in Yunnan province and has always loved animals and nature. He started his artistic career by drawing animals. During the Cultural Revolution he spent five years living in remote areas near China’s south-western borders, in close proximity to wild animals. He has published more collections of animal paintings and books on how to paint them than any other Chinese artist. His first book of animal sketches was published in 1979.

Yuan believes that nature needs to be cared for and treated as sincerely as a religion. Over the last decade, China’s environment has gone from bad to worse and environmental disasters have become common: from the almost-forgotten 2004 pollution of the Tuo River in Sichuan, to the overnight algae bloom in Lake Tai in 2007, to the reports of lead poisoning around the country in 2009, to the over-development of hydropower, chromium pollution, cancer villages and the cadmium-contaminated rice that have attracted media attention over the last two years.

But Yuan does not believe money alone can solve the problem – determination to use it properly is also needed. 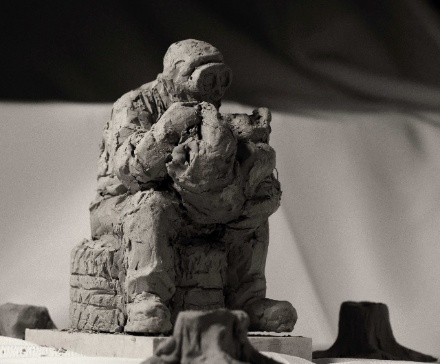 Among a felled forest a human figure clad in protective clothing sits on a discarded tyre and feeds a baby panda. The work accuses humanity of destroying the panda’s habitat and then pretending to care for it

He cites Dian Lake in Kunming as an example. In the late 1990s the lake was badly polluted and the Yunnan government applied to the World Bank for a loan to clean it up. Yuan supported this application and recommended it to World Bank environmental official Zhang Chonghua. A US$200 million loan was approved and spent – but the lake was left just as polluted.

Yu Xiaogang of the Yunnan-based NGO Green Watershed told chinadialogue that their investigations of this case found that not much of the World Bank money had actually been used for clean-up work. The bank is aware of this but decided not to publicise or pursue the matter for fear of damaging its own reputation. “Wherever the money ended up,” said Yu, “the Chinese government will have to repay it.”

Another 200 million yuan of taxpayers’ money was invested in cleaning up the lake recently, Yu added. He’d like the government to tell the public how it has been used.

Such confusion over how money has been spent is common in China, but Yuan is more worried about “official capture” of environmental protection. “Some officials complain about polluted water just so they can get the funds to clean it up. It’s treated as a business. They’re not looking after the environment, they’re using it.”

The effects of environmental pollution will last for generations, Yuan points out. “Our planet is not inherited from our forefathers – it’s borrowed from future generations. We can’t just leave them a desert, a rubbish tip, or a rising ocean.” This is why China’s current plight pains Yuan so much. “Corrupt officials are claiming they’re acting in the interests of the people, but environmental protection is the most important of those interests – it’s the biggest religion” he says, slamming his hand on the desk.

Punishing crimes against the environment

As an environmental artist, Yuan meets a lot of famous foreigners. He’s currently working on ink portraits of 152 international politicians and personalities and using this opportunity to talk about his environmental ideals. He even turned a conversation with footballer Diego Maradona about a sculpture commission into a debate about PM2.5.

Miniature versions of Yuan’s sculptures of polar bears and tigers have been given out as awards as part of the UN Environment Programme’s Champions of the Earth Awards. In 2009 his polar bear sculpture was placed in the UNEP headquarters in Nairobi.

Yuan has also launched a number of environmental advocacy efforts at home. Since March 2009 Yuan has spent almost 10 million yuan of his earnings on environmental advertising, with images of his sculptures displayed on over 1,000 bus stops in 60 cities, including Beijing, Shanghai and Guangzhou.

As a member of the Standing Committee of the Chinese People’s Political Consultative Conference, Yuan has made numerous proposals on environmental protection. Between 2008 and 2012 he submitted eleven proposals on environmental protection and conservation, covering electric energy vehicles, protecting the Siberian tiger, preventing the transplantation of old trees, protecting fish in the Yangtze, and improving drinking water standards. During this year’s Lianghui, China’s annual parliamentary season, he proposed a ban on the purchase of ivory products by civil servants.

Sometimes he intervenes directly. In 2012 he asked the forestry police to shut down a shop in Beijing’s five star Kunlun Hotel which was selling products made of tiger bones.

Yuan thinks the best way to protect the environment is to solve issues of sentiment and awareness. Ideas such as "crimes against the environment" immediately make nature seem more important. He hopes to use artistic expression to encourage people to change the way they think.