On 1 May, the UK parliament declared a climate emergency. It’s not entirely clear what this means, if anything much. It was a relatively easy pass, not compelling anyone to do anything specific legally.

It followed a series of declarations of climate emergency by local governments over the last six months, with the Scottish and Welsh governments beating the London parliament by a couple of days. Universities are also getting in on the game, first Bristol, then Newcastle, with a handful more being petitioned. We might expect the royal medical colleges and other institutions to follow.

It also followed 11 days of protest from radical new environmental group Extinction Rebellion (XR). They occupied swathes of central London, including outside parliament, disrupting the public transport system and leading to over 1,000 arrests. The British weather uncharacteristically blessed everyone with sunshine and at times it felt like the best parts of Occupy and Reclaim the Streets. Familiar, iconic spaces were turned on their head to offer us an alternative vision for our lives, and people from all walks of life dropped by for a chat, at least out of curiosity.

At the centre of it all was a pink boat – named after murdered Honduran activist Berta Cáceres and emblazoned with the very 21st-century message TELL THE TRUTH. It was positioned just south of the BBC’s Broadcasting House, at the core of London’s shopping hub, Oxford Circus. Dame Emma Thompson flew in, climate lawyer Farhana Yamin superglued herself to the pavement outside Shell’s HQ, Massive Attack did a DJ set, and there were rumours of a new Banksy. Perhaps the most striking image, however, was 83-year-old activist Phil Kingston sitting on the roof of a Docklands Light Railway train, calmly eating a sandwich. 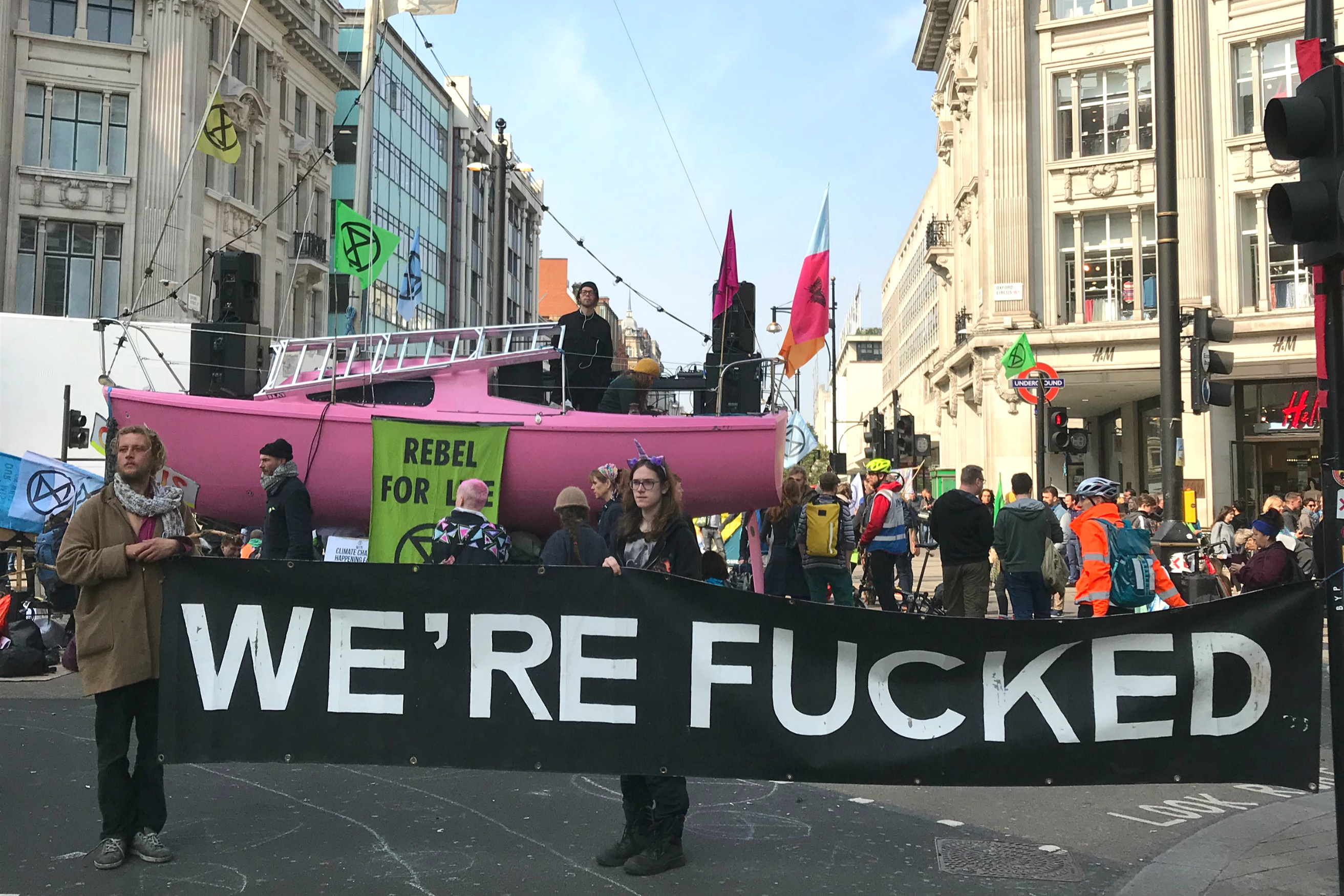 International climate superstar Greta Thunberg joined the fun. When she met with party leaders in parliament, Prime Minister Theresa May didn’t make it, and a photo of her empty chair made national news. There was also a special primetime BBC television show – Climate Change the Facts – fronted by naturalist (and British national treasure) David Attenborough. Then, just as the fuss seemed to be calming down, the Committee on Climate Change (the CCC, the UK government’s scientific advisors on climate change) published their long-anticipated report recommending that the UK adopts a new emissions target: net zero greenhouse gases by 2050.

Though reports of “a climate spring” might be overstating it, something is certainly in the air.

Events like these always come from somewhere. The youth strikes have been incredibly powerful, growing over months, and the BBC climate special also comes after much internal debate on the issue of climate coverage. Plus, popular support for climate action is nothing new in the UK. For several years, the challenge has been to take a broad but not especially vocal support for climate action and turn it into a political force. The fossil fuel divestment movement fed this in places, as did local Friends of the Earth or Greenpeace groups, the transition town movement, solar schools and a host of other activities. It seems to have, finally, bubbled up.

XR has not been uniformly popular. There were some grumbles over disruption, though not as many as might be expected, and a fair bit of debate over whether alarmist language of extinction and emergency is a good idea. More seriously, their tactics of mass arrests have been critiqued as ignoring the racial politics of policing; whitewashing the climate justice movement. XR also lost friends when they dubbed the CCC’s report a “betrayal of current and future generations”. Don’t bite friends, or at least if you do, expect them to bite back.

Where next? We can expect a lot from the more established green NGOs, as well as from other grassroots campaigns. The Reclaim the Power camp at the end of July could be very interesting, for example. XR may well shift as it grows and diversifies, and see more groups rise or re-form, offering space for those who, for whatever reason, find XR hard to swallow. The youth movement is, I think, only going to grow. XR has also popularised the idea of citizens’ assemblies on climate change. Done well, this could be very powerful.

There remains the question of whether there is any real commitment behind politicians’ rhetoric. Declaring an emergency is easy, doing something isn’t. Giving space for a bit of carnivalesque protest has long been a tactic for keeping people from stronger rebellion. I’m sure some politicians are hoping those heady days over Easter were just an outlet and the pressure will go away.

Throughout all of this fuss, the UK has been beating records for days upon days without coal. That’s a real step, though still only one of many we have to take. There remains a ban on onshore wind in England, subsidy cuts last month provided yet another nail in the coffin for solar, and the UK has the biggest fossil fuel subsidies in Europe.

We’ve been here before too. In the run up to the Copenhagen talks in 2009 there were new campaign groups formed, warm words from politicians, concerts and, yes a TV special fronted by David Attenborough (though the frame then was “climate chaos” not “climate emergency”). That air of optimism was lost pretty quickly.

And then there is Brexit. Britain’s “climate spring” came in a brief recess from the quagmire of discussion about our role in the EU. Not only does Brexit distract us from climate change, it diminishes the UK’s role on the world stage. Labour leader Jeremy Corbyn said he hoped declaring an emergency would “set off a wave of action from parliaments and governments around the globe” but it’s been a while since the UK was a global leader on climate action.

One thing is for sure, if the UK does host 2020 UN climate talks, we’ll have an absolute ball.

The truth about London’s killer fog

Can the UK deal with its own waste?