In the Dhauliganga valley of India’s Western Himalayas, caterpillar fungus – a highly valued aphrodisiac and medicinal plant – has brought prosperity over the past decade. Communities have become overwhelmingly dependent on the rare fungus, known as yartsagunbu in Tibet, for their income. But overharvesting has led to depletion of the species and environmental damage in the fragile alpine grasslands.

These were the findings of our recent research study “Yartsagunbu: transforming people’s livelihoods in the Western Himalaya” published in December 2018. We analysed the harvesting and trade of caterpillar fungus in 32 villages in the Nanda Devi Biosphere Reserve in Uttarakhand state. We found that caterpillar fungus contributes about 74% of a harvester’s household annual cash income, and has transformed local social and economic conditions in the last 10 years. 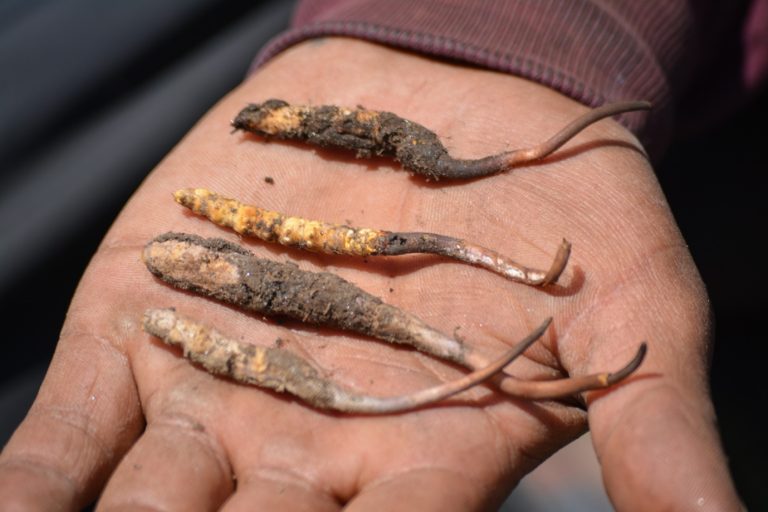 “Now I spend this money for my children’s education, family healthcare and daily needs for a whole year. Furthermore, now I do not have to rely completely on agriculture, which is subject to rainfall and destruction by wildlife,” said 36-year-old Prem Sing Rana, who harvests caterpillar fungus every year and took part in the study.

But the lure of easy money has put enormous ecological pressure on the caterpillar fungus and the Himalayan landscape, leading to a sharp decline of the species.

Historically, people who lived in the Nanda Devi Biosphere and Askot landscape of the Western Himalaya traded wool, millet and salt between Tibet and the lowlands of India. After the Indo-China conflicts in 1962, trade with Tibet stopped. And people in the area – largely from the Tibetan ethnic Bhotia group – had to rely on subsistence agriculture, herding and collecting medicinal herbs.

In the 1990s, the community discovered caterpillar fungus in the area.

The fungus (Ophiocordyceps sinensis) infects and eats the inside of ghost moth caterpillars, kills them and emerges out of their head. The species is found among the high-altitude Himalayan meadows of Tibet, as well as in Bhutan, India and Nepal. It is a popular aphrodisiac in Chinese medicine and is increasingly used as a dietary supplement.

The fungus was discovered about 1,500 years ago by Tibetan herdsmen, who observed their livestock become energetic after eating a kind of mushroom. Consequently, royal physicians during the Ming Empire used it to develop powerful and potent medicines. The fungus is usually consumed by cooking it with aged duck to treat hypo-sexuality and male impotence. It is also cooked with pork, sparrow and turtle to treat fatigue. In some parts of Nepal, caterpillar fungus is powdered and drunk with cow’s milk as a tonic and aphrodisiac. It is also believed to treat a range of ailments, including asthma, renal complaints, irregular menstruation and inflammation.

In Askot, Uttarakhand state, harvesting of caterpillar fungus began in 1996, after locals learnt of its economic value from migrant Nepali workers. News of this lucrative commodity spread like wildfire around different valleys of the Nanda Devi Biosphere Reserve. People now harvest caterpillar fungus from alpine meadows and get a handsome return by selling it to brokers, who then take it to China. 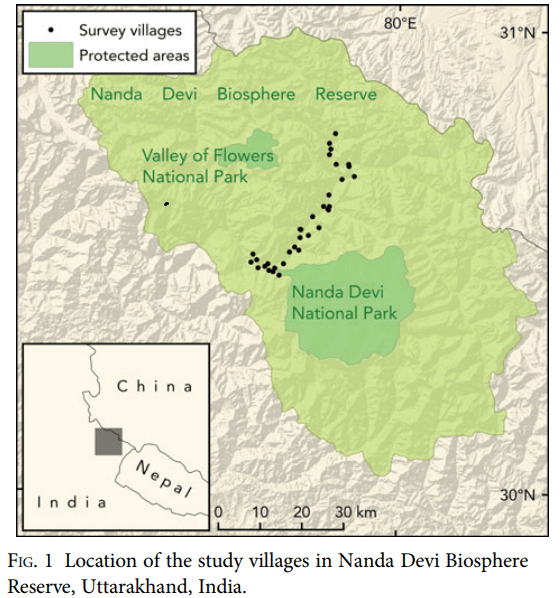 Today, at least one person in every household around the Nanda Devi Biosphere Reserve and Askot landscape has left in pursuit of caterpillar fungus, which is now traded across cities in Asia and in western countries.

The harvesting season for caterpillar fungus lasts from the beginning of July until the end of June. People lie on the ground, trying to spot the tiny caterpillar fungus, as small as an apple stalk. Collectors have to brave harsh climates and there are no guarantees they will find anything at all. Some villagers return with nothing to show after weeks of hardship in high altitude pastures.

The majority of collectors believe that harvesting caterpillar fungus has become more difficult in recent years because of fierce competition and a decline in the abundance of the species. This is supported by our data on per capita harvest.

Overgrazing and growing human pressures on the alpine pastures has had a negative impact on caterpillar fungus and its habitat. During the study, supported by the Conservation Leadership Programme and Rufford Foundation, we documented how thousands of villagers go to collect the fungus each year, taking their tents, food and domestic animals.

These activities are bound to destroy remote pastures and threaten the endangered Himalayan species, such as snow leopards, blue sheep and alpine plants. Rubbish surrounds the camps of harvesters and there is no system in place to clean it up. 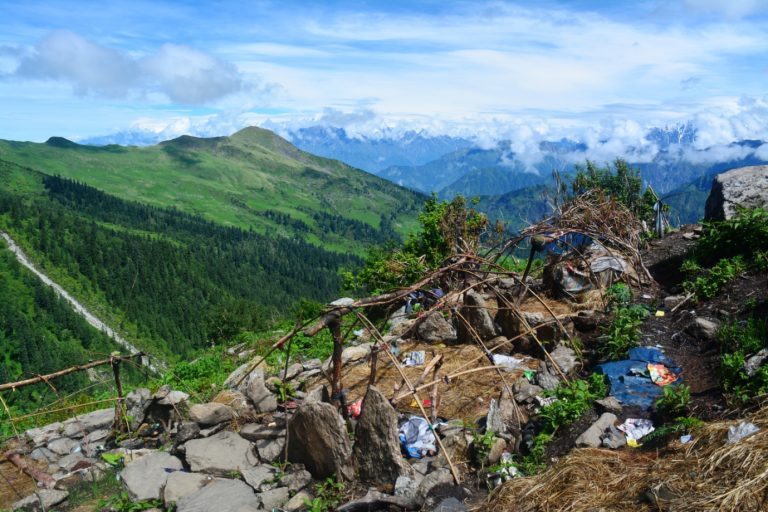 Abandoned shelters of caterpillar fungus collectors at the end of the harvesting season (Image: Muzamil Ahmad)

Since many major Asian rivers – including the Ganga in Uttarakhand – originate in the high altitude meadows, the habitat of caterpillar fungus is also a vital source of water for people living downstream. Pollution and habitat destruction here will have profound effects on the quality and availability of water in those rivers, already vulnerable to climate change.

Ultimately, over-harvesting is almost certainly responsible for a sharp decline in caterpillar fungus population. New research from Stanford University has also shown climate change is responsible for this decline, in a region where average winter temperatures have increased by 4C since 1979 in some places. 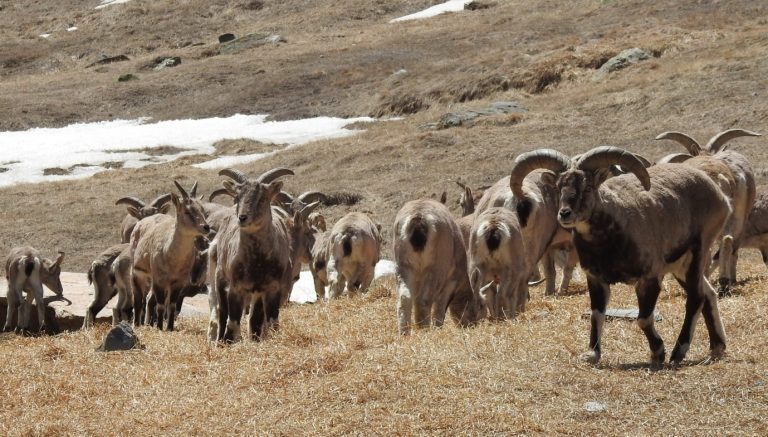 All these threats could lead to the local extinction of the species. On the Tibetan plateau in China, caterpillar fungus is also disappearing, and its distribution area is creeping further up the mountains because of warming temperatures.

In many parts of India, the collection of caterpillar fungus is legal but the trade is illegal. This has led to smuggling of the fungus into Nepal and China and selling on the black market. The Uttarakhand government has issued guidelines for the collection and trade of the fungus through local level forest councils, which issue permits for these activities. However, government regulations are not enforced in these remote regions.

The rampant and unregulated harvesting of caterpillar fungus has raised concerns about the extinction of the species and threats to the alpine landscape in Nepal and China as well, prompting calls for sustainable management.

There is an urgent need for greater public debate and research on the impact of caterpillar fungus harvesting in India, as well as in China, Bhutan and Nepal. In these remote regions there is inadequate regulation and a lack of government policies to support sustainable resource management and alternative local livelihoods.​

Pramod K. Yadav carries out research and advocacy on conservation to combat wildlife crime and promote sustainable and legal trade of wild resources.