As the earth’s climate warms, people face mounting threats from rising seas, and more intense and frequent storms, heatwaves, fires and droughts. When these events hit, people want to understand whether they are connected to climate change.

The science of attribution can do this. It links observed changes in climate to natural and human-induced causes. In recent years, it has amassed a wealth of evidence to show convincingly that these changes are dominated by the effects of human-induced greenhouse gas emissions. As the IPCC concluded in its Fifth Assessment Report: “Human influence on the climate system is clear”.

Attribution science has been key to demonstrating the need for action to reduce emissions in order to avoid the worst effects of climate change. Societies can use such information to help them adapt to the inevitable changes in the climate coming our way, and ensure that suitable regulatory and legislative frameworks are put in place.

The realisation that individual weather events could be linked to climate change came in 2003 when a devastating European heatwave was estimated to have killed more than 70,000 people. Myles Allen, professor of geosystem science at Oxford University, proposed the concept of event attribution, arguing that it would be possible to calculate the increased risk of a particular event due to climate change. The following year, I published a paper in Nature, co-authored by Myles and another Oxford colleague, Daithi Stone, which showed that human-induced climate change had very likely more than doubled the risk of such a heatwave.

This science has since burgeoned. Climate scientists have studied a wide range of weather events around the world, including heatwaves, heavy rainfall events, tropical cyclones and droughts.

China has also been leading, thanks in part to the Climate Science for Service Partnership – China project, a collaborative partnership between UK and Chinese scientists. Some of the results have been published in the annual reports, “Assessing Extreme Events from a Climate Perspective”, which attribute events from the previous year. For example, a collaborative China-UK study led by Ying Sun of the China Meteorological Organisation has shown that anthropogenic influence roughly doubled the chances of the extreme rainfall in south-eastern China in June 2017, when heavy floods affected more than 10 million people, with 38 dead and about 800,000 people forced to relocate.

The rapid development of attribution science has raised three key questions concerning its future potential. How reliable is it? What aspects of the science need to be improved? And how quickly and routinely can results be produced?

How reliable is event attribution science?

The basis of all event attribution assessments is a model. This is needed to calculate the counter-factual situation in which human activities had not changed the climate. A typical approach is to run a model many times to simulate the current climate in which greenhouse gas concentrations are at today’s elevated levels, taking account of natural and anthropogenic influences on the climate. The results are then compared with alternative simulations in which the climate model includes only natural factors, such as changes in solar output or the climatic effects of volcanic eruptions. These models also include natural climatic variability, such as changes associated with the El Nino Southern Oscillation phenomenon by which temperatures in the Pacific Ocean vary and influence global surface temperatures.

But can these models reliably represent observed reality? In 2016, an independent expert panel of meteorologists and statisticians was convened by the National Academies of Sciences (NAS) in the United States to assess the capability of event attribution. They concluded that “It is now often possible to make and defend quantitative statements about the extent to which human-induced climate change has influenced either the magnitude or the probability of occurrence of specific types of event or event classes”.

The NAS report found that confidence is greatest for extreme events related to an aspect of temperature, being highest for extreme heat and cold events, followed by hydrological drought and heavy precipitation. They found lowest confidence for attribution of severe convective storms and extratropical cyclones.

The reason for lower confidence is related to the ability of models to represent the processes involved in the formation of the extreme events. Whereas climate models can typically represent changes and variability in temperature over large regions very reliably, they can struggle with other types of event, for example, representing the intensity of rainfall in severe convective storms. This is because they do not have the spatial and temporal resolution to resolve the processes involved. 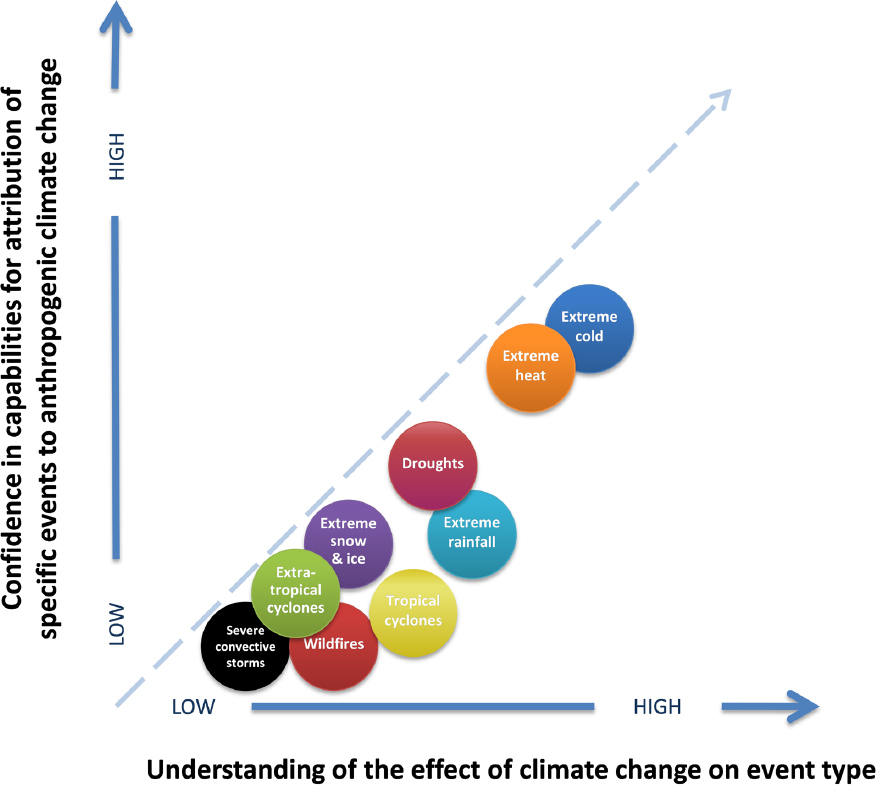 What needs to be improved?

The aim of event attribution is to improve our understanding of climate processes and their representation in climate models. This includes increasing the spatial representation of models so they incorporate a wider range of weather processes. It also includes improving the capability to compare models with observations, for example by assessing the ability of models to replicate key features of the evolution of weather events over many occurrences of such events.

As the National Academies of Sciences report pointed out, improvement will also come from the further development of long observational records. It’s also important to frame the attribution question correctly. An attribution study might for example consider how climate change has affected a particular flood in the presence of El Nino. This would require the counterfactual model simulations to also include an El Nino by specifying the pattern of sea surface temperatures associated with the phenomenon. This may give different results to a study that evaluates the effects of climate change on flood risk irrespective of whether there was an El Nino or not. Both types of attribution study may have value but both need to be clearly communicated to avoid confusion.

How quickly and routinely can results be produced?

During an extreme weather event there is often considerable public and media interest in the link with human-induced climate change. Event attribution science can now deliver robust assessments of very recent events, at least for extreme temperature events. These can draw on peer-reviewed methodologies but each individual analysis does not necessarily need to go through such a lengthy process any more than an individual weather forecast needs to.

There is potential for attribution assessments to become part of the regular production of climate services, by complementing climate monitoring and prediction with regular updates on how climate change is altering the probability and magnitude of recent extreme weather events.

However, caution will be needed in which types of weather event are incorporated into such activities. As the National Academies of Sciences report pointed out, confidence for different types of weather event differs. Low confidence events such as severe convective storms will still be studied in peer-reviewed publications, and it is likely to be some time before such events are routinely included in regular climate service assessments. But as climate science develops, and as climate models improve, a wider range of extreme events will be robustly and regularly attributed to natural and human-induced causes.

Attribution science has developed the capability to assess the extent to which extreme weather events are linked to climate variability and change. Scientific uncertainties still remain and it is not possible to make robust attribution statements about all extreme weather events. But it is clear that such events are increasing in frequency and intensity globally. It is also increasingly possible to draw robust conclusions about the extent to which the risks from some extreme events, including large-scale long-lasting temperature-related events, have been affected by human-induced emissions. This information could be of great value for informing climate mitigation, adaptation and litigation.

Winter is coming, but how can communicators keep climate change in the news?

How ‘attribution science’ is shifting the legal landscape