Rice is the primary food source for more than three billion people around the world. Many are unable to afford a diverse and nutritious diet that includes complete protein, grains, fruits and vegetables. They rely heavily on more affordable cereal crops, including rice, for most of their calories.

My research focuses on health risks associated with climate variability and change. In a recently published study, I worked with scientists from China, Japan, Australia and the United States to assess how the rising carbon dioxide concentrations that are fuelling climate change could alter the nutritional value of rice. We conducted field studies in Asia for multiple genetically diverse rice lines, analysing how rising concentrations of carbon dioxide in the atmosphere altered levels of protein, micronutrients and B vitamins.

Our data showed for the first time that rice grown at the concentrations of atmospheric carbon dioxide scientists expect the world to reach by 2100 has lower levels of four key B vitamins. These findings also support research from other field studies showing rice grown under such conditions contains less protein, iron and zinc, which are important in foetal and early child development. These changes could have a disproportionate impact on maternal and child health in the poorest rice-dependent countries, including Bangladesh and Cambodia. 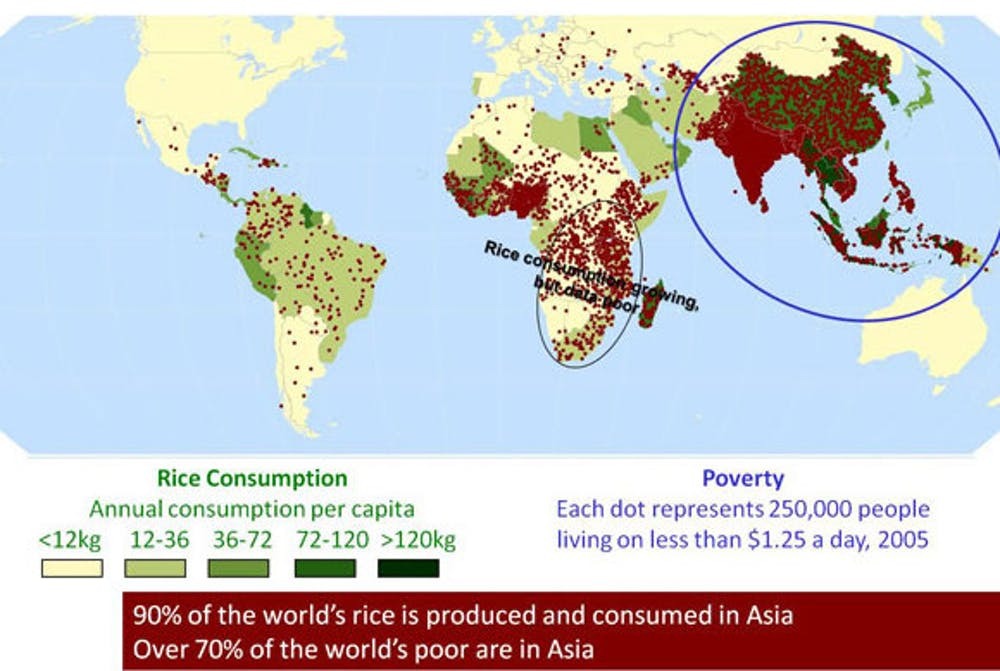 Many of poorest regions in Asia rely on rice as a staple food (Source: IRRI)

Higher concentrations of CO2 are generally acknowledged to stimulate plant photosynthesis and growth. This effect could make the cereal crops that remain the world’s most important sources of food, such as rice, wheat and corn, more productive, although recent research suggests that predicting impacts on plant growth is complex. 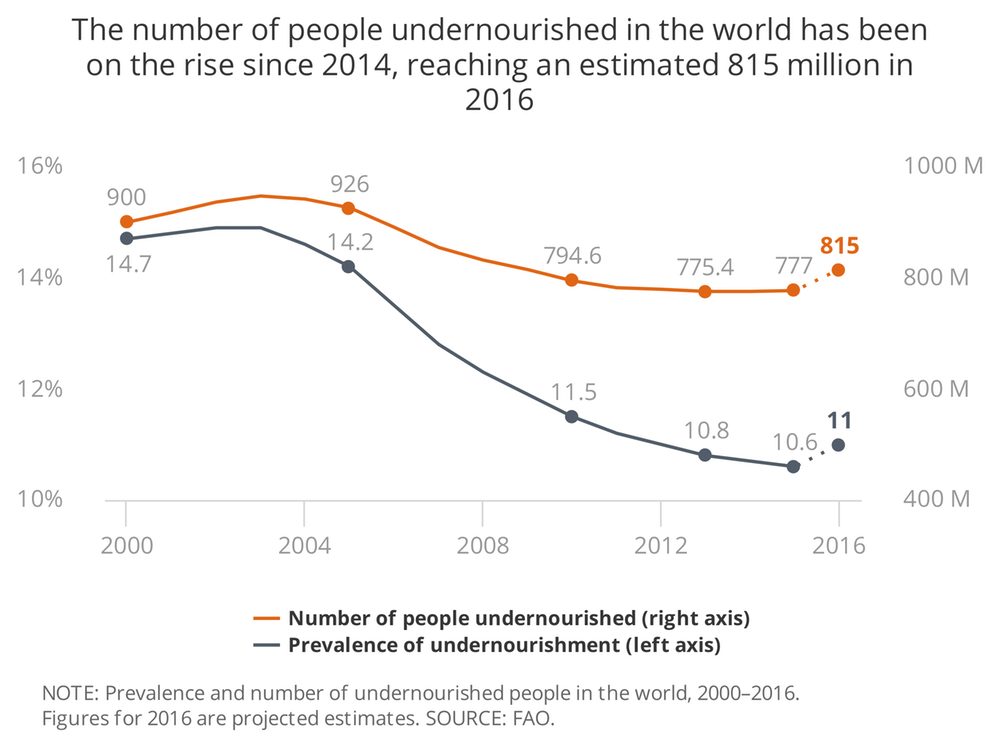 After steadily declining for over a decade, global hunger appears to be on the rise, affecting 11% of the global population (Source: FAO)

The importance of micronutrients

Worldwide, approximately 815 million people worldwide are food-insecure, meaning that they do not have reliable access to sufficient quantities of safe, nutritious and affordable food. Even more people – approximately two billion – have deficiencies of important micronutrients such as iron, iodine and zinc.

Insufficient dietary iron can lead to iron deficiency anaemia, a condition in which there are too few red blood cells in the body to carry oxygen. This is the most common type of anaemia. It can cause fatigue, shortness of breath or chest pain, and can lead to serious complications, such as heart failure and developmental delays in children.

Higher carbon concentrations in plants reduce nitrogen amounts in plant tissue, which is critical for the formation of B vitamins. Different B vitamins are required for key functions in the body, such as regulating the nervous system, turning food into energy and fighting infections. Folate, a B vitamin, reduces the risk of birth defects when consumed by pregnant women. 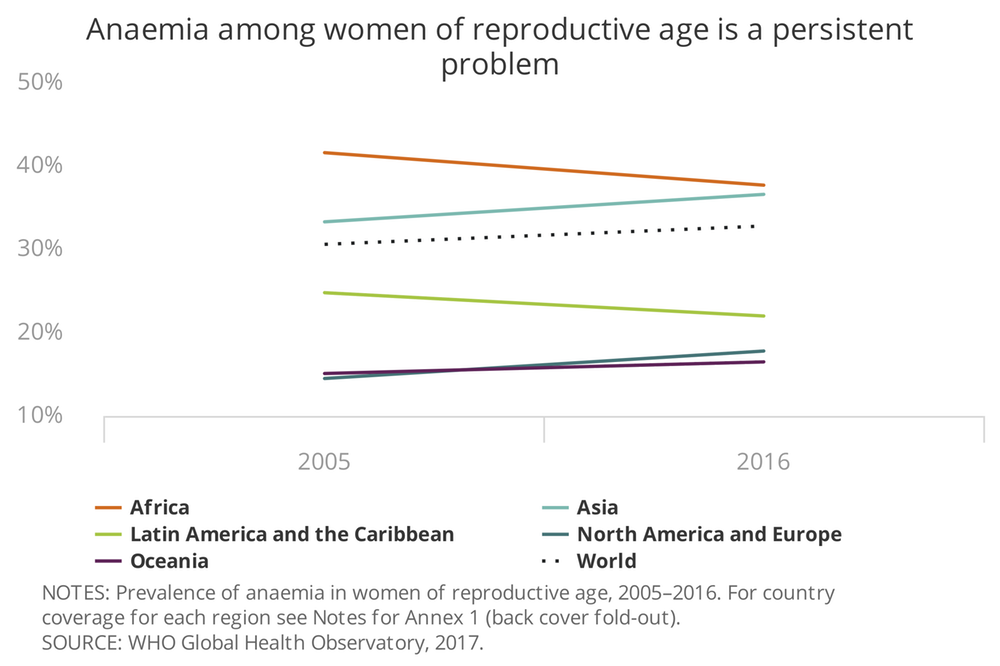 We carried out our field studies in China and Japan, where we grew different strains of rice outdoors. To simulate higher atmospheric CO2 concentrations, we used Free-Air CO2 Enrichment, which blows CO2 over fields to maintain concentrations that are expected later in the century. Control fields experience similar conditions except for the higher CO2 concentrations.

We also found average reductions of 10% in protein, 8% in iron and 5% in zinc. We found no change in levels of vitamin B6 or calcium. The only increase we found was in vitamin E levels for most strains. 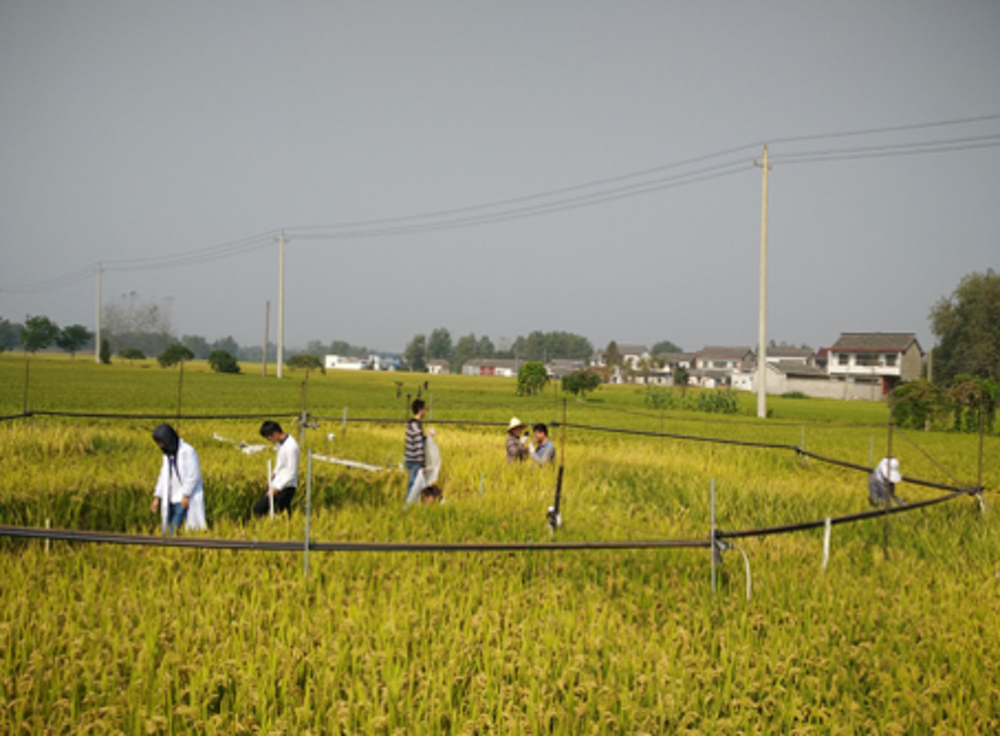 Rice within the octagon in this field is part of an experiment designed to grow rice under different atmospheric conditions. Rice grown under carbon dioxide concentrations of 568 to 590 parts per million is less nutritious, with lower amounts of protein, vitamins and minerals (Image: Dr Toshihiro Hasegawa, National Agriculture and Food Research Organization of Japan)

At present, about 600 million people — mostly in Southeast Asia — get more than half of their daily calories and protein directly from rice. If nothing is done, the declines we found would likely worsen the overall burden of undernutrition. They also could affect early childhood development through impacts that include worsened effects from diarrheal disease and malaria.

The potential health risks associated with CO2-induced nutritional deficits are directly correlated to the lowest overall gross domestic product per capita. This suggests that such changes would have serious potential consequences for countries already struggling with poverty and undernutrition. Few people would associate fossil fuel combustion and deforestation with the nutritional content of rice, but our research clearly shows one way in which emitting fossil fuels could worsen world hunger challenges.

How could climate change affect other key plants?

Unfortunately, today there is no entity at the federal, state or business level that provides long-term funding to evaluate how rising CO2 levels could affect plant chemistry and nutritional quality. But CO2-induced changes have significant implications, ranging from medicinal plants to nutrition, food safety and food allergies. Given the potential impacts, which may already be occurring, there is a clear and urgent need to invest in this research.

It is also critical to identify options for avoiding or lessening these risks, from traditional plant breeding to genetic modification to supplements. Rising CO2 concentrations are driving climate change. What role these emissions will play in altering all aspects of plant biology, including the nutritional quality of the crops that we use for food, feed, fibre and fuel, remains to be determined.

This article was first published in The Conversation