In a recent article and accompanying report, I argued that northern China faces a water crisis unless immediate and disruptive changes are made.

A response to my article co-authored by Sarah Rogers, Jiang Min, Shi Chenhen and Zhang Wenjing, claims that “China’s economic development is not threatened by shortages of supply, and is unlikely to be in the near future.”

I hope that this response is right, both for China’s sake and for the rest of the world, given today’s economic interdependence. Unfortunately, if I am to sing a palinode, I need more convincing arguments than those offered.

We certainly have some points of agreement, but my reluctance to recant comes primarily from the article’s failure to take sufficiently into account the politics behind decision making in China and the way things actually work on the ground.

The article’s argument is summed up by the view that, “Overall, north China does not need to get more water, it needs to better manage the water that it has.” I believe that the evidence goes against this first proposition, while the second is self-evident but cannot justify the first.

‘Uncritical’ use of the Falkenmark Index

Of course, the Falkenmark Index can only provide a rough assessment of water scarcity. You have to look beneath its surface. Otherwise how to explain that Israel manages on 91 cubic metres per capita, based on World Bank figures, or that there are severe drought problems in California when the United States enjoys 8,846 cubic metres.

But it is a little disingenuous to admit that “the value of the index for north China is certainly lower than the values for western Europe or North America.” That does not convey the scale of the difference. The population of the Beijing-Tianjin-Hebei (Jing-Jin-Ji) region is roughly double that of the United Kingdom, France or Italy but its water resources are only around 10% of the UK and 7% of those of France and Italy.

Secondly, I am loath to put too much trust in official statistics. The incentives for falsification are milder than those for gross domestic product. But the difficulty of compiling accurate statistics, particularly of groundwater, should not be underestimated; nor the accuracy of population statistics.

Even so, the claim that “Official data suggests that Beijing’s groundwater levels have stabilised since 2010, and actually rose slightly in 2015 and 2016,” is flatly contradicted by the Water Supplies Bureau of Beijing, which has said that the rate of decline is slowing and that only in 2025 will groundwater levels start to rise. It attributes this improvement to the South-North Water Transfer Project (SNWTP). This year’s record period without rain in the Beijing region will not help.

Beijing and Xiong’an are not northern China

The article emphasises that Beijing and Xiong’an would not be charging ahead with water consumption if a crisis was imminent. I wish I could share this optimism. It would be an heroic assumption to reckon that the authorities in Beijing took into account the water situation in all 12 water scarce provinces in the north.

Beijing is the capital and Xiong’an is President Xi Jinping’s signature project, now entered into the national constitution. So both places will have their water needs prioritised, not least from the SNWTP (see chart below, where the rises in water resources in the Jing-Jin-Ji region coincide with the opening of the SNWTP). Last year a member of a top government thinktank told me that he thought that the Xiong’an project was a mistake. Two of his three reasons were a lack of water and an over-abundance of pollution. 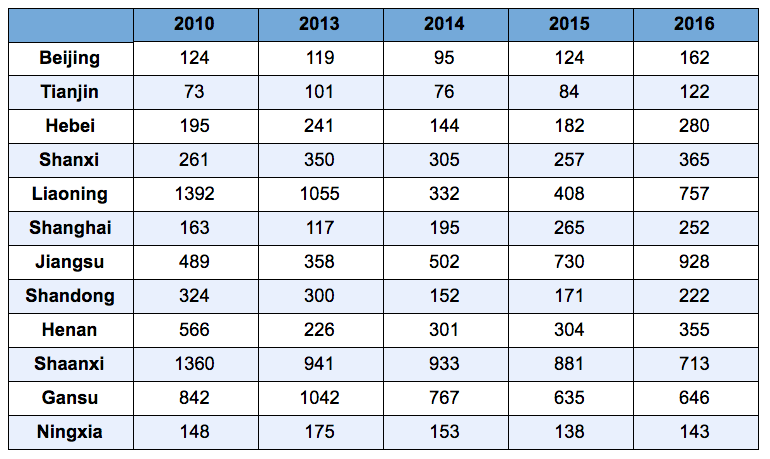 Sadly, I don’t find it surprising that Beijing used over one billion cubic metres for public parks and environmental flows. Water for such purposes is usually too polluted for agricultural, industrial or personal use.

The article also concentrates too much on Beijing. The capital is making commendably great efforts to recycle but is not representative of other provinces. Li Keqiang promised one trillion yuan of investment in water conservancy in 2018; most will go into water transfers, which do not increase overall supplies, and into pollution control, which makes a limited difference. Much more will be needed if recycling rates are to make a large difference outside the cities of Beijing and Tianjin.

Potable water is a minor part of the story

Several times the article adduces a better supply of potable drinking water as evidence that there is no crisis. The government’s efforts to improve the quality of water are admirable, but however good the quality, if the overall amount is too small there is still a problem.

In any case, use of water by people constitutes only 14% of the total. While residents of Beijing may use 50-70% less water than residents of Melbourne, that saving is small compared to far greater demand from agriculture (about 62%) and industry/power generation (22%). It is the demand from agriculture and industry that has led to the Yellow River failing to reach the sea and to the disappearance of 28,000 rivers. Meanwhile, increasing urbanisation and rising living standards are likely to close the gap between Chinese and Australians.

Curing water pollution is not a silver bullet

We should commend the Chinese government for its efforts to rectify pollution, but it is wrong to say that, “To a large extent China’s water availability problems have stemmed from extensive water pollution.” They have certainly not helped. But water that is unusable because of pollution amounts to 8.3% of surveyed water. It wouldn’t make much difference if this water could be used because demand rises in line with population and aspirations.

Reducing that 8.3% of unusable water will be difficult and expensive, not least because much of the soil is polluted, which contaminates water seeping through it. I do not agree that there are, “reasons to be optimistic about how China is addressing water pollution.” Three targets were missed in the 2017 National Economic and Social Development Plan. All relate to the environment and one was the water pollution target.

As for the 2015 State Council Water Action Plan, like so many of these plans, it is a statement of aspirations; much of the work of concrete implementation, regulation, and enforcement lies in the future. The River Chiefs system may help, but cadres are adept at getting round these sorts of measures, and ultimately promotion and punishment remains a matter of relationships as much as of performance.

Water transfers are not a solution

The article claims that, “As China moves towards a near-national water grid, water availability will not be a major constraint on its development.” I am not the only one who cannot share such optimism on the South-North Water Transfer Project and the myriad of other smaller such projects.

Here is an opinion from a 2015 paper written by an Australian team of academics who were working on the SNWTP: “The volume of water being diverted along existing routes of the SNWD [D is for Diversion] project must be reduced and extensions to the project must be shelved… As its limitations become clear, the SNWD project might well mark the nadir of big-engineering solutions to China's water problems.”

I agree. And as it happens, those views were from the same team from Melbourne University, which now seeks to persuade me that the SNWTP and a good water grid mean that water scarcity is not a problem. Given that the paper discusses the secrecy surrounding water and the difficulty of getting information, it would be interesting to know what has changed in the 30 months since the 2015 paper.

Talk of a “near-national water grid” fails to convince. Topography, expense and time cannot undo the fact that over 80% of China’s water is in the south and cannot be moved to the north. The age of Mao and "yu gong yi shan" (faith moves mountains) is over.

On this we are agreed, particularly the need to tackle demand rather than supply. But a failure to set far higher prices for water, while understandable in terms of political stability, is exacerbating the water scarcity problem in the longer term.

I don’t find it surprising, comforting or reassuring that only one of 15 firms interviewed by the authors discussed constraints on water use (and as for special industries such as ski resorts or golf courses, their development is lunacy). They don’t report water as an issue because the price is so low compared to other countries where water is far more abundant.

I also have doubts about the water saving management contracts and nascent water exchange. These sensible measures are still embryonic and will take a long time to have any effect, if they ever do. The experience of carbon markets is not encouraging.

Should we talk of a looming crisis?

I believe we should. We cannot know when it will hit, although in some provinces in the north water scarcity is already affecting lives and livelihoods. Better management, including the measures outlined in my report, might prevent a crisis. But the longer the delay in implementing them, the more likely a crisis will be.

I hope I am wrong, because the consequences will be bad for all of us. But the evidence suggests that I may not be. And certainly, the co-authored response to my article does nothing to change my view.

China’s green Belt and Road tested at the Russian border