Almost one hundred Chinese cities, from Beijing to Lhasa, now have bike-sharing schemes. The bikes, clad in various colours, have GPS trackers and can be unlocked simply by scanning a barcode on the frame with your phone. Some can even be reserved via a phone app.

Zhu Dajian, director of the Sustainable Development and Urbanisation Think Tank at Tongji University, told chinadialogue that ten years of efforts to promote public bicycle schemes by the Chinese government had had little effect, yet these new schemes, run by private firms, have taken off in a mere year and have already reduced the number of car journeys and congestion.

China may be creating a new model of transportation that could be adopted globally.

Rapid investment has seen the number of bikes on the road rocket and spread over the course of the year. But this has also caused problems. Bikes are often parked haphazardly and infringe on urban spaces, while the manufacturing of the bikes is causing pollution.

A number of bike-sharing firms have recently published data which, they claim, shows the schemes provide urban residents with a convenient and low-carbon travel option.

According to that report the total number of car journeys in the 50 cities in which Mobike operates fell by 3% since the scheme launched in 2016 (in Shanghai in April and in Beijing in September). In Beijing, 44% of the company’s bikes are used near subway stations; in Shanghai, the figure is 51%.

Mobike users travelled an incredible 2.5 billion kilometres in total in one year, saving the equivalent annual emissions of 170,000 cars. These figures were based on Mobike’s user data and 100,000 survey responses.

Shortly afterwards Ofo, Mobike’s biggest competitor (its bikes are yellow) and up-and-comer Bluegogo (its bikes are blue) published their travel data from the first quarter of 2017.

The arrival of bike-sharing schemes also saw congestion drop by 7.4% in Beijing, and by 4.1% and 6.8% in Guangzhou and Shenzhen. Contributors to the report included Gaode Maps and research from the China Academy of Transportation Science.

Although the competing companies may be overstating their data, Zhu Dajian says there is no question that the number of short car journeys has decreased.

“In just a year the percentage of bike journeys has gone from single figures to double digits,” says Zhu.

Daizong Liu, China transport programme director at the World Resources Institute (WRI), told chinadialogue that although the WRI does not currently have data on bike sharing, the use of these bikes in Chinese cities is already at phenomenal levels.

While urban residents may now find getting about the city easier, the rapid expansion has not been without problems. The bikes can be left and collected from anywhere in the city which is causing headaches for municipal authorities.

Media reports from Shenzhen told of over ten thousand bikes “invading” a beach during a recent public holiday, with an entire road taken over by parked bikes. 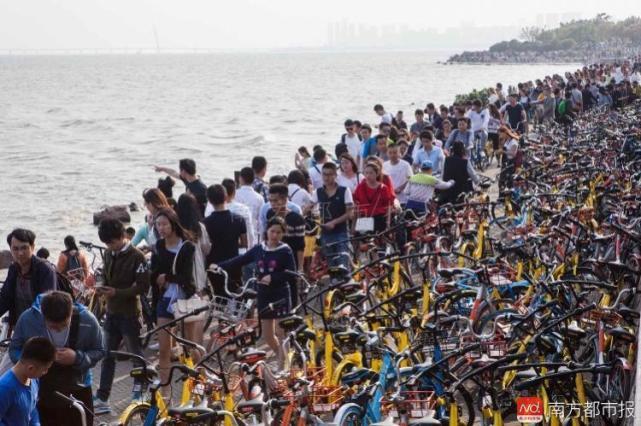 There have been similar scenes in Hangzhou. Wu Weiqiang, a professor at Zhejiang University of Technology, said in a research article that if the four bike-sharing firms working in Hangzhou continue to expand at current rates, they will have almost 330,000 bikes in the city by the end of year, adding to the tens of thousands already present as part of a separate government scheme.

This will mean the market in Hangzhou, which has a permanent population of nine million, will be saturated.

According to a China Central Television report there are currently twenty bike-sharing schemes competing in Beijing, with almost one million bikes.
​
Zhou Zhengyu, head of the city’s transportation commission, said at an event marking Beijing’s Bicycle Day in April that the city has 700,000 shared bikes. It is as yet unknown if this is too many for a population of 20 million, as there are no authoritative figures on how often bikes are used. According to the Beijing Youth Daily the Xicheng district of Beijing has banned people from leaving shared bikes on ten major roads.

Nie Riming, a researcher at the Shanghai Institute of Finance and Law, thinks that the rise of shared bikes is in large part caused by failures of urban and transportation planning.

“Government-led public transport can’t meet [people’s] needs, so shared bikes have become popular. The market is filling a gap, and the government should look at how to improve, rather than just worry about badly parked bikes or excessive numbers.”

“There’s also a lack of standards for where bikes can be left, or any barriers to entry to the market, meaning a disorderly market,” said Liu Daizong. “Shared bikes have developed rapidly and the government is bound to need time to react and to research appropriate policies – but I’m sure the authorities have acquired experience through regulation of the ride-sharing sector, which will allow for more effective management of shared bikes.”

Liu added that citizens have a right to choose how they use the roads, and as more and more people take to shared bikes the model of urban transportation management – currently built around cars – will inevitably change.

Zhou Dajiang told chinadialogue that “behind the over-expansion of the various bike-sharing schemes lies excessive competition between companies.” According to one report, Ofo and Mobike have received a number of rounds of funding, with investments of up to three billion yuan. The companies are aiming to snap up market share by rapid expansion.

In April, Mobike announced it had put a total of 3.65 million bikes on the road and was manufacturing 100,000 more a day – 45% of the global total. Ofo says it will have 10 million bikes available by the end of the year.

The bicycle is a zero-emission form of transport. But the sharp increase in the manufacturing of bicycles is causing environmental problems.

An environmental NGO, the Institute of Public and Environmental Affairs (IPE), has found that some makers of these bikes, such as Fuji-ta, one of Tianjin’s biggest bicycle manufacturers, are getting such large orders from Ofo that they are running at full capacity and failing to take environmental issues into account.

Some facilities have failed to upgrade waste gas treatment facilities, or have failed environmental protection checks. The manufacturer of magnesium alloy wheel hubs for Mobike has a poor environmental record – it has directly released dust and toxic substances into the air.

Ding Shanshan, head of the IPE’s green supply chains project, told chinadialogue that they have found breaches of rules, such as the construction of factories before approvals have been given.

“The bike-sharing companies are rushing to get market share and have a huge demand for bikes. If they want to get a certain number of bikes onto the streets of a certain city in the next week, the manufacturer has to work overtime and add extra production lines – and there’s no time to install environmental equipment or carry out environmental assessments.”

An employee with Flying Pigeon, a well-known Chinese bicycle brand, said that bike-sharing orders mean that production lines are working at full capacity even in traditionally quiet times of the year, with extra staff taken on and output expanded. Monthly output has risen from 100,000 bikes to 400,000.

On May 10th and 26th, IPE wrote to two bike-sharing firms, asking them to consider the environmental damage the manufacture of their bikes might be having, to encourage problematic suppliers to make improvements and offer public explanations, and to build supplier management systems. But Ding Shanshan said neither Mobike or Ofo have responded.

A Greenpeace study found that Ofo uses disposable batteries in its smart locks, in order to save money. But this will be harmful for the environment. 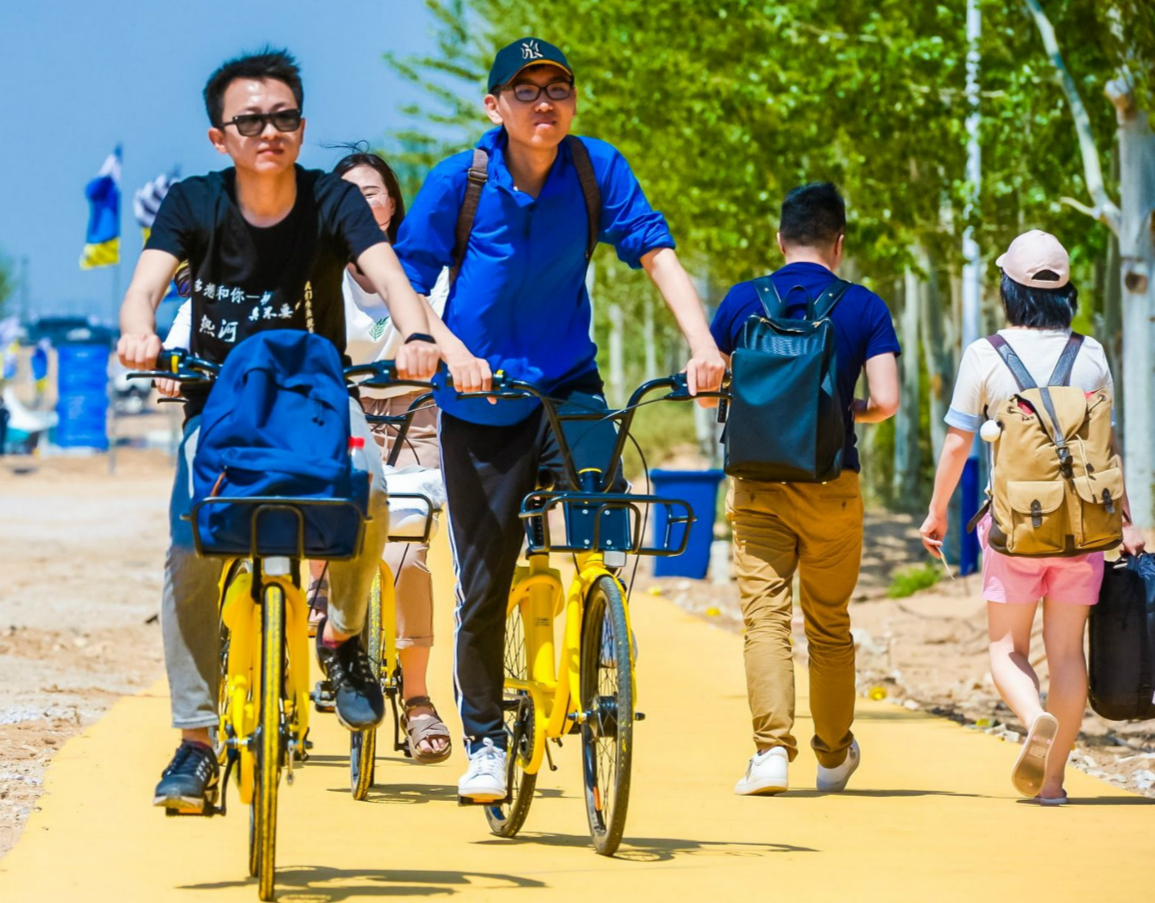 Unlike European schemes, bikes can be left anywhere (Image: ofo)

The Chinese government has already expressed support for the bike-sharing sector. When soliciting opinions on rules for bike-sharing, the Ministry of Transport said that internet-based bike rental schemes are to be encouraged to develop and improve service levels, so these bikes will help improve urban transportation and reduce emissions from transportation. However, it is still unclear what actual rules will be applied.

Zhu Dajian says that the problems arising in the sector cannot be solved by the companies alone and that government, the firms and consumers need to work together.

He says that these schemes, invented in China, have created a new model for the urban public bicycle. Earlier schemes in Europe required bikes to be returned to fixed stations – but the Chinese version is smarter and bikes can be left anywhere. Also, this is a new model for market provision of public services.

But he also pointed out that the market is approaching saturation in major cities such as Beijing, Shanghai, Guangzhou and Shenzhen, the next step will be to limit bike numbers and increase frequency of use. Zhu admits that the government will need a new approach to deal with this phenomenon. But if bike sharing can grow soundly and replace an urban transportation model based around the car, the entire world will benefit from China’s example.

If bike sharing can replace an urban transportation model based around the car, the entire world will benefit

China’s bike-sharing firms are already working on international expansion. Ofo has 30 million users across China, Singapore and the US. Mobike says it is at work in over fifty cities in China and aboard, and will cover 100 around the world by the end of the year. The bike sharing revolution is already breaking out of China’s cities and going global.