I moved to China in 2014 because at the time I thought China was the country with the greatest need for environmental activists. With the election of Donald Trump that dynamic shifted, and I decided it was time to bring the fight back to the US.

I remember watching the footage of the 2014 People’s Climate March on television from my office in Beijing, and thinking how exciting it was that the climate movement was drawing big crowds. When I heard that this year’s People’s Climate March in Washington DC would be on Trump’s 100th day in office, I wanted to be part of the action.

With the recent removal of climate change from the Environmental Protection Agency (EPA)’s website and Trump's dismantling of US climate policies, I assumed people would arrive by the thousands, outraged, to make their voices heard. The result was underwhelming.

The March, which took us from the Capitol, surrounded the White House and ended at the Washington Monument, drew about 200,000 people. That may sound like a lot, but fell short of the 311,000 who attended the 2014 Climate March and pales in comparison to the half a million who took to the streets for the Women’s March in January.

This time round people persisted through temperatures of over 90 degrees Fahrenheit, a sweaty reminder of the effects of climate change and 20 degrees above the average in Washington for this time of year.

Other than shouts of, “Shame! Shame!”, as we walked past the Trump International Hotel, the atmosphere had a subdued but joyous carnival vibe, which felt inappropriate considering the scale of the environmental problems we are facing and the gravity of having a climate change denier in the White House. 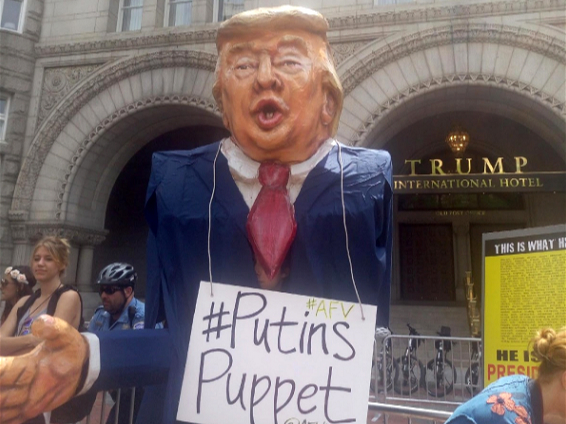 The March drew many organisations, including religious groups, environmental activists, scientists and health care professionals. The result was a multi-faceted message, with some topics being aired only tangentially related to climate change.

Many people I spoke to said Trump’s election inspired them to attend the March, but they were unable to articulate any concrete policy goals. The March mainly felt like a symbolic resistance to the Trump White House rather part of a deliberate strategy to enact change.

But despite the diversity in organisations, the makeup of individuals in the crowd was homogenous and predictable. Other than the indigenous community from the Standing Rock movement and a few smatterings of immigrant and environmental justice groups, the March consisted mainly of white liberals with a pretentious message: if you’re a climate denier you are intellectually inferior to us. Many of the signs belittled not only Trump, but also the intelligence of his supporters. 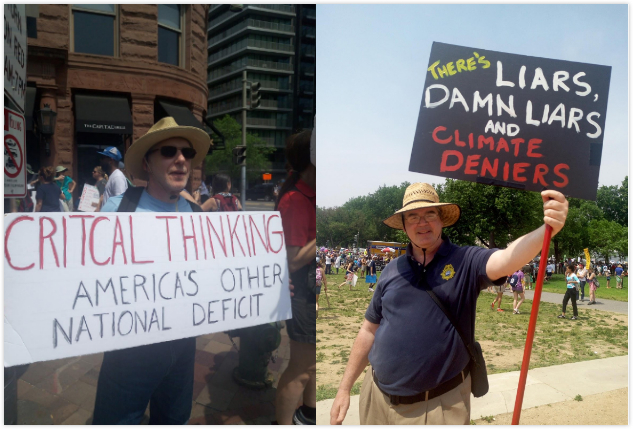 Conservatives were hard to come by, but I did manage to find some pro-life advocates who protest every Saturday in DC. They had decided to co-opt the climate march for their own benefit. 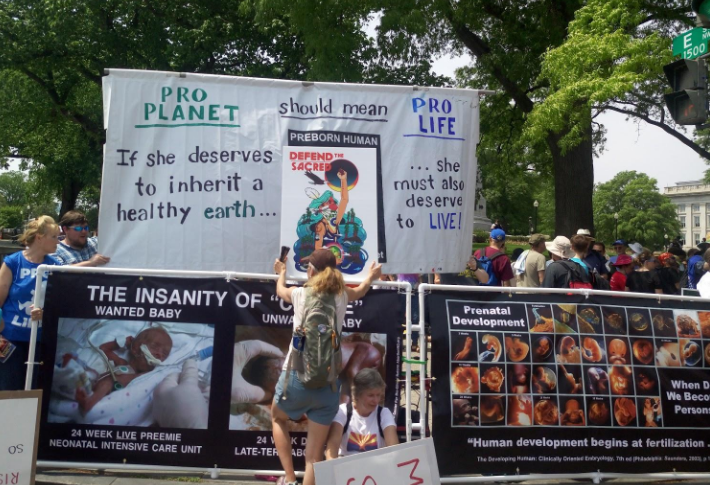 When I asked William, a conservative farmer from Virginia and one of the pro-life protesters what he thought of the whole thing, he admitted that he thought climate change is a hoax. But as we kept talking, William said something I wasn’t expecting. Although he voted for Trump and supports most of his policies, he wasn’t happy that the EPA is being taken over by corporate tycoons like Scott Pruitt.

That’s when I realised the climate movement in the US isn’t packaging its message correctly. If the 97% scientific consensus on climate change hasn’t convinced people like William and the thousands of climate deniers around the country, waving a sign in their face belittling them won’t either. 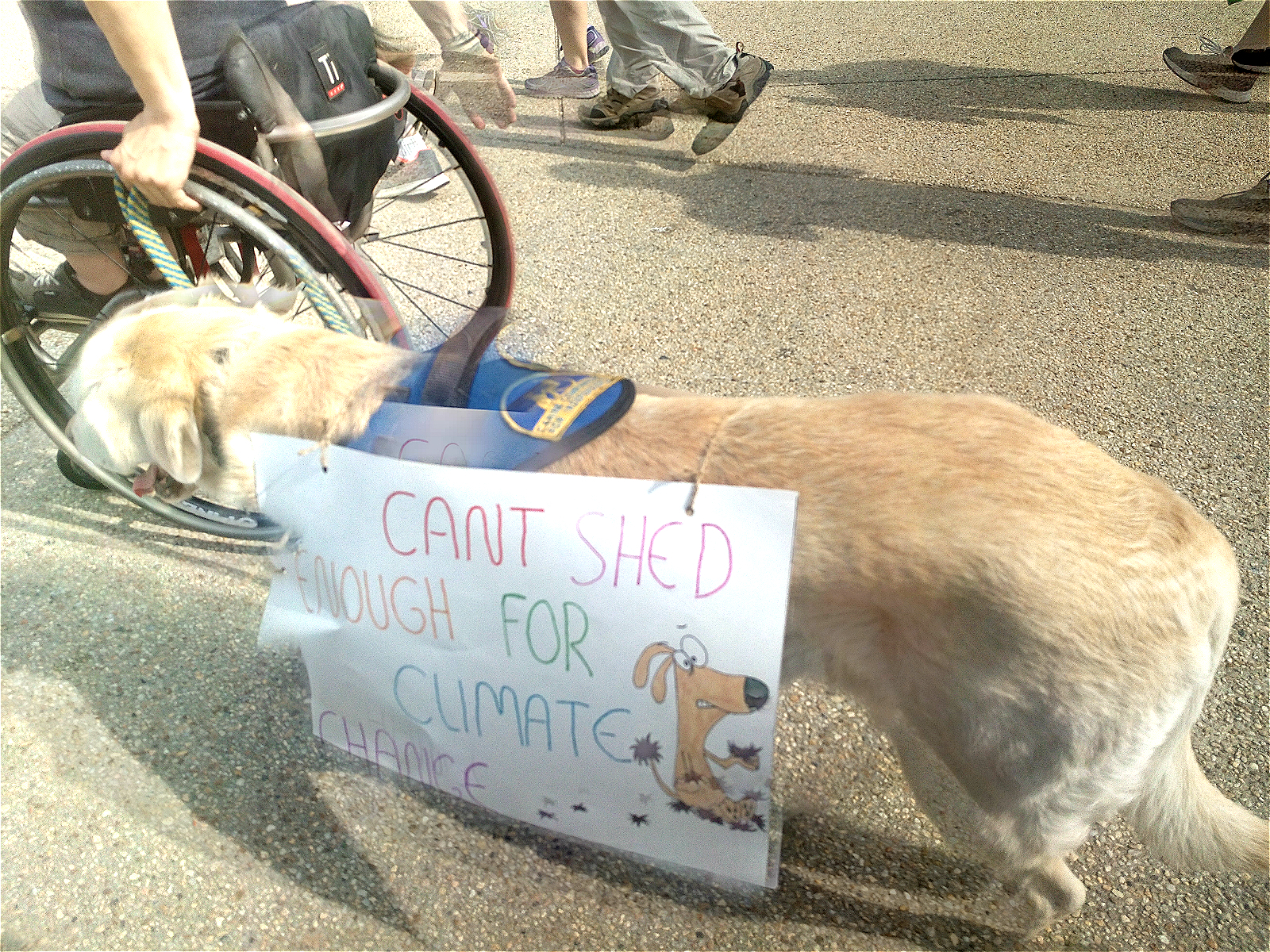 But fighting back against the greed and corruption of corporations, especially the fossil fuel industry, is something that most Americans can get behind.

Polling by the NYTimes indicates that 80% of Republicans believe money has too much influence in politics. The fossil fuel industry is certainly a big part of that. The oil and gas industry, for example, contributed more than US$100 million (690 million yuan) during the 2016 election cycle.

Blue collar workers across the political spectrum are suffering from economic hardships, and although some of them don’t believe in climate change, they are still angry at the corporations who are taking advantage of them.

Oil field workers I interviewed in Bakken, North Dakota were frustrated that corporations are cutting corners in terms of safety regulations on the oil rigs. Members of their communities are getting injured and even dying because of corporate greed. And as indicated by the popularity of Bernie Sanders, many conservative working-class voters have policy views that are much more liberal than their voting choices indicate. The main thing they are looking for is someone to recognise their struggle. As ironic as it sounds, I think the climate movement should follow in Trump’s footsteps in that regard.

The labor unions, a small contingent of Saturday’s March that recognised the potential of appealing to the conservative base, focused on jobs and how clean energy can help disenfranchised Americans get back on their feet.

According to a report from the Department of Energy, solar employed 43% of the Electric Power Generation workforce last year, an astonishing number in comparison to the 22% employed by fossil fuels. The coal sector alone is losing 10,000 jobs per year because the industry is in decline and no longer profitable.

In order to combat Trump’s lucrative promises of bringing back jobs by reviving the fossil fuel industry, I think that climate advocates need focus what the benefits renewable energy can offer conservative voters.

Rather than contributing to the polarisation of the American public, the climate movement would benefit from focusing on economic issues that appeal to a broader base rather than the losing battle against climate deniers. To create a true People’s Climate March, we have to focus on all people, rather than just those educated enough and with the resources to understand climate science.

How cities, businesses, and citizens can save the planet