Out of industrial dust and ashes, the lakeside Hammarby Sjöstad district of Stockholm arose in 1999. Meanwhile, 5,000 miles to the west, the historical Pearl District of Portland, Oregon reawakened. Drawing on detailed case studies on Hammarby and the Pearl District completed under the aegis of China Development Bank Capital’s Green and Smart Guidelines, this article presents the critical lessons the districts’ sustainable development can offer China.

China reports that a startling 200 eco-city projects are under construction across the country. Challenges facing China’s urban sustainability are legion. Many municipal governments are underfunded and rely on promoting sprawling development for additional revenue, planning practices in China are still largely car-centric, and accountability mechanisms can be weak.

The Pearl District is a case of redevelopment and with Hammerby, new development. Both projects followed a similar development process: they set early and comprehensive environmental goals, aligned these with developers’ incentives, and created accountability systems to ensure the goals were met.

Some 15 years after the projects broke ground, the districts’ flourishing economies, excellent environmental records, and vibrant communities prove that sustainability and growth do not have to be mutually exclusive. On the contrary, they can instead be mutually reinforcing.

A Pearl of Wisdom

Hosting shipping docks and the major Union train station in the early 1900s, the district was a bustling commercial and transit hub in the up-and-coming northwest.

However, in the 1950s, massive post-war highway construction became the gateway drug for the country’s car addiction and a migration from the harbor district to distant suburbs.

Just as the ascent of car-centric development patterns drove the life out of the Pearl, the emergence of the urban sustainability agenda offered the district an opportunity for revival.  While the district had become derelict, its history provided an essential foundation for its regeneration as a model of sustainability.

To trace this foundation, imagine zooming into Portland on a map. Hovering above Portland, you will see a distinct boundary between grey-coloured urban areas and green wilderness. This line is a product of progressive state legislation passed in 1973 establishing urban growth boundaries around major cities to prevent further sprawl.

This policy provided an incentive for ‘infill’ development in underutilised inner-city areas such as the Pearl District, rather than developing suburbs.

Zooming in toward the Pearl, the district’s road network comes into sight. Originally laid down before the age of automobiles, the grid consists of small blocks, 200 feet by 200 feet, which encourage walking by offering a more efficient route between any two points. Compare this with the superblocks currently dominating modern Chinese cities, daunting pedestrians and nudging them toward driving. 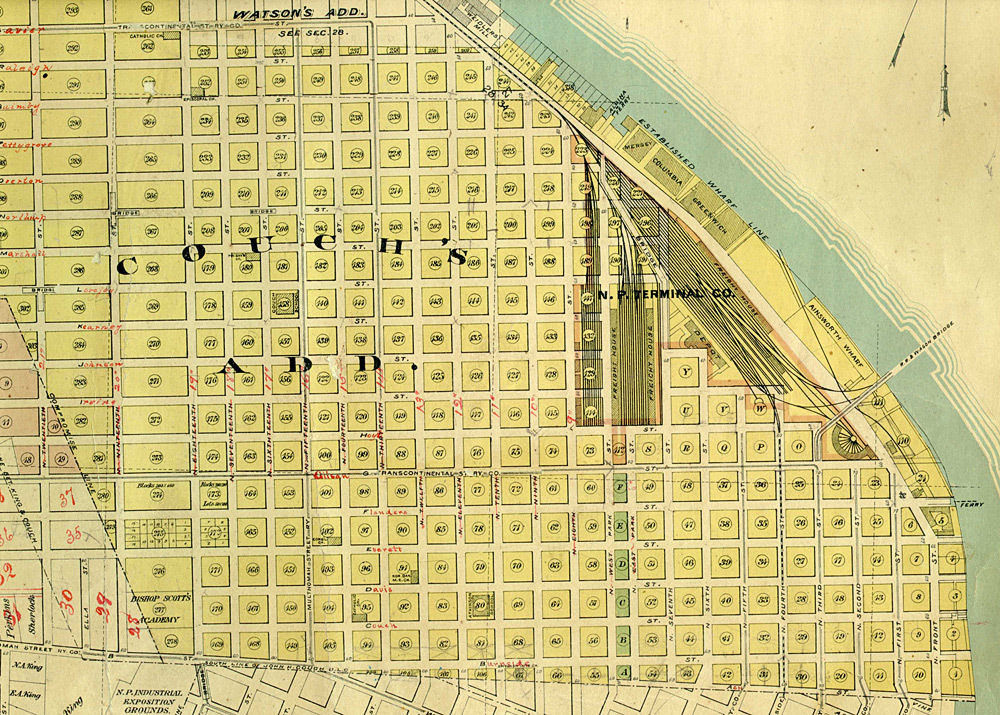 Zooming in even further, the city’s main mass transit system, the ‘Portland Streetcar’, emerges cutting across the Pearl District. Preceding the district’s redevelopment by a few years, the Streetcar became a critical artery and catalyst for development in the Pearl.

New green technology and innovation have supplemented the Pearl District’s foundation of sustainable urban form and transportation throughout its redevelopment. The district incorporated the voices of a diverse set of stakeholders to create a series of plans with explicit goals to preserve the district’s industrial history while updating it to integrate sustainability and livability.

This plan led to the addition of several prominent public parks, and the Brewery Blocks—a development project comprised of buildings that all comply with LEED [a US green building code], a district cooling facility, low-flow water fixtures, and solar PV arrays. Policies such as maximum parking thresholds also helped the city guide the district towards a low-carbon lifetstyle by making car use difficult  and reducing the need to drive .

Development agreements and tax increment financing from the Portland Development Commission incentivised developers to fulfill the sustainability goals established in the district’s plan and ensured accountability.

Some 15 years after redevelopment launched, the Pearl is thriving. The population density of the district has quadrupled while easy access to parks and public transit such as  the Streetcar allows for a high quality of life in the area.

In a 2008 survey of Pearl residents, three quarters of residents said they drove less since moving to the Pearl; 58% said they usually walk, bike, or take transit to work. The district’s economy is also flourishing, driven by an influx of young, creative professionals. Between 1994 and 2010, job growth increased by 54%, average salary increased by 41%, and land market value increased by seven-fold, inflation adjusted.

Unlike the bustling Pearl District of old, the Hammarby Sjöstad district of Stockholm had humbler origins as a brownfield industrial site. When Stockholm applied to host the 2004 Olympic Games, Hammarby was offered a fresh start as the site for the Olympic Village.

Due to the Olympic Committee’s heightened focus on the  environmental impact of the Games after the Rio Summit, sustainability was an essential part of Hammarby’s development plan from the start.

Even though Stockholm did not win the bid, Hammarby was still slated for development to house Stockholm’s growing population. The city’s decision to continue building Hammarby as a sustainable development was informed by a previous misstep in Swedish development.

Akin to China’s ghost city phenomenon in which the supply of urban housing has outpaced demand, the Swedish government rapidly built massive housing projects in the late 1960s, many of which were left empty because of their poor quality and their long distances from city centres.

Hammarby was to represent a new era in which sustainability would be embedded in the district’s DNA from the start of the planning process.

The overarching sustainability goal for Hammarby’s development drew from the Olympic bid’s ambition for Hammarby to be “twice as good” as any comparable development in terms of its environmental impact.

Hammarby set comprehensive goals for sustainable urban form, transportation, and energy and resources. This led to mixed-use  development in small blocks, where all residents have close access to high-quality public transit. The development’s proximity to inner-city Stockholm also gave it the benefit of linking into Stockholm’s advanced public bike-sharing and public transport network.

Similar to the Portland approach, the city of Stockholm provided incentives to Hammarby’s developers to ensure that environmental goals drove their design. The Hammarby Project Team developed a computer modeling tool called the Environmental Load Profile which quantified the environmental impact of any development. Developers had to use this tool to show how their plans would meet the district’s overall goal to be “twice as good.”

The municipality offered land at a lower price to developers who pledged to meet those objectives.  Another financing method in the city’s toolbox was the Local Investment Programme (LIP) subsidies provided to municipalities by the national government for sustainability programmes and facilities. The LIP supported some of the major technological cornerstones of Hammarby’s development including a new waste water treatment plant.

These investments also helped inform the district’s most notable sustainability achievement: the “Hammarby Model.” The model shows how Hammarby’s waste, water, and energy should flow as an “eco-cycle” which emphasises resource reuse in a circular system. This thinking led to Hammarby’s waste-to-energy heating system and the aforementioned waste water recycling plant.

Hammarby is part of the broader eco-cycle of Stockholm.

Fifteen years later, Hammarby is thriving and has an impressively low environmental impact evidenced by its significantly higher population density and lower car ownership compared to surrounding districts in Stockholm, already one of the world’s most sustainable cities.

And all of this has been accomplished while the district’s economy is flourishing: average annual income is 356,000 SEK, [277,932 yuan] compared with 293,000 SEK in Stockholm as a whole. This shows that Hammarby’s sustainable development has not only been beneficial for the environment, it has also created a prosperous society.

How can these projects inform China?

These cases demonstrate  the power of interactions between the components of sustainable design—the whole sustainable city is far greater than the sum of its parts. Capturing the benefits of these interactions is also largely the message behind the “circular economy,” which the Chinese central government has strongly touted in recent years.

The Pearl’s tight street grid makes walking more efficient, while the streetcar and other public transport deter car use. Smaller blocks made the design of Hammarby’s waste-to-energy system cheaper and easier to implement. Mixed-use development means that buildings can be used for up to 24 hours, which shortens payback periods on green buildings by taking better advantage of their energy efficiency gains.

Through comprehensive design, Hammarby’s eco-cycle model uses the district’s inputs and outputs to produce energy from waste and reuse water—an efficient system achieved through a high degree of collaboration among all parts.

By following the roadmap of Hammarby and the Pearl District, China can make great progress in the greening of its cities in the coming years. But the payoff does not stop there; these two cities provide powerful real world evidence of the economic and social benefits as well. Sustainable urbanisation will be fundamental in China’s ambitions to develop a more consumer-led, innovative economy. Now mayors and developers need to ensure that urban planning, incentives, and accountability are all aligned so the “new pattern of urbanisation” can be truly sustainable.

This article was adapted from two case studies written by Energy Innovation for China Development Bank Capital’s Guidelines for Green and Smart Urbanization. You can find the full case studies here.