As millions of people continue to migrate to China’s cities, one man is moving against the tide. Ou Ning –  artist, designer, editor and general cultural connoisseur  –  has renounced the luxuries of urban life and swapped his Beijing apartment for a house in the crumbling village of Bishan in Anhui, one of China’s poorest provinces.

The Chinese government has ambitious plans to shift another 250 million people into towns over the next 12 years in a bid to drive growth and boost consumption.  But Ou Ning believes China’s massive urbanisation has been a destructive social force and its benefits unfairly distributed. He hopes to encourage people to go back to the countryside and to balance the relationship between urban and rural areas.

A few years ago, Ou Ning founded the Bishan commune, which brings together artists and intellectuals to get involved in China’s rural reconstruction movement. He spoke to Beth Walker about his alternative vision of China’s future and how he plans to redress the negative side of urbanisation.

Beth Walker (BW): Why did you start the Bishan commune?

Ou Ning (ON): I’ve been interested in the countryside for a long time. I was born in a small village in western Guangdong. I went to university in Shenzhen, moved to Beijing and spent many years in the city. In 2003 I was commissioned by the Venice Biennale to do an urban research project on San Yuan Li, a village for migrant workers in Guangzhou. 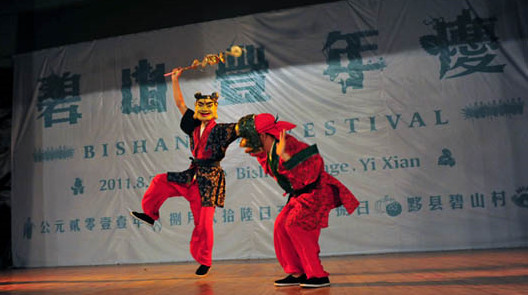 A performance of traditional Anhui opera at Bishan Harvestival

When I did this research I realised that the problems in the urban village had a very strong connection with the countryside. Farmers can’t make a living and so they come to urban areas and live in slums.

Guangzhou was the first city to open up in the 1970s and needed more land. The local government got land from villages for urban development and so the village was swallowed up in the 1980s. This cost villagers their farming land, but they still kept their rural hukou [household registration]. There were no jobs so they had to build new buildings for rent. Low income people moved in from different provinces and the security situation got really bad.

I realised these problems came from the countryside and so I started reading books about the Chinese countryside. I read about Y.C. James Yen, a pioneer of the rural reconstruction movement in the 1930s. I really admired his work. He studied at Yale during the First World War and then volunteered his services in France  – actually 200,000 Chinese farmers went over to clean up the battlefields of Europe. They didn’t speak European languages or read and write Chinese. Yen started to teach them and established the first ever Chinese-language labour publication. Yen realised the potential for learning among the common people, and was inspired to return to China and start the Dingxian experiment in Hebei, a mass education and rural reconstruction movement to develop the strength and knowledge of the people. I was very moved by his story.

Today China has been through a massive urbanisation process. Every city is spending money and needs land, this has led local governments to grab land from the countryside and sell it to developers. Farmers contribute land and labour but they don’t share any of the benefits. Recently they have begun to understand their rights and there have been protests. In contemporary China this process has reached a very dangerous stage. The process of urbanisation is a redistribution of resources –  it is more radical than a revolution and the process has been very unfair. 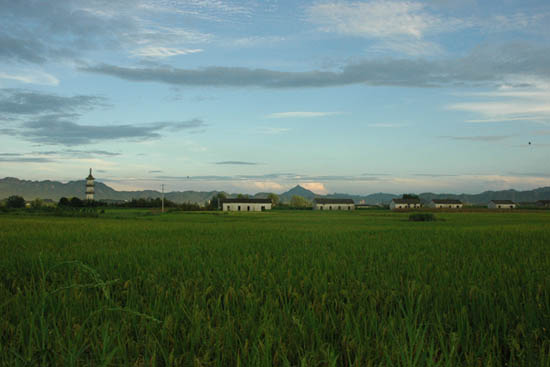 The Huizhou region of Anhui is famous for its traditional architecture

Bishan is in the Huizhou area of Anhui province. Huizhou is famous for its businessmen who made a lot of money from salt in the Qing and Ming dynasties. But they put their money back into the village and built houses with beautiful architecture.

I am also interested in “anarchism” and autonomy – how people can self-organise and help each other by exchanging labour and mutual aid. To build a house people don’t need money but all share the work. This is a beautiful idea which can’t exist in modern urban societies, but it can exist in traditional rural societies. This is why I set up Bishan Commune.

There are lots of intellectuals working on rural reconstruction in China, but most of them are doing work on an economic level or on a social organisation level. But Bishan mainly focuses on artistic and cultural events. Since the 1970s many people have moved to urban areas and a lot of villages are now empty – there are only old people and children. There is no public life and so what we did is to try to bring more artistic and cultural events for the villages.

BW: What is the local economy of Bishan based on now?

ON: The area has tourism because of its beautiful architecture and the Huangshan (Yellow Mountains).  Xidi and Hongcun villages have become popular tourist places, and Nanping village, where Zhang Yimou shot his film “Ju Dou”. But the local government sold the whole Hongcun village to the famous retail developer Huang Nubo (who tried to buy up land in Iceland). They set up a ticket entry system and the villagers share very little of the profits. This is a very bad economic model.

I’ve tried to develop a different model. We don’t sell tickets and we help villages set up their own independent businesses. For example, small restaurants or home inns.  We have also developed a good relationship with the local government. We organise the Bishan Harvestival every year, where we invite lots of artists, architects, designers, filmmakers, musician, poets, thinkers and activists to come and revitalise local life.

BW: How has your project been welcomed by local people?

At first they thought I was a big boss from Guangdong running a tourist business. Because when we organised the Harvestival we used big buses to bring in foreign guests. This made me very sad. But in 2012 we invited a Taiwanese architect to install proper lighting (the village did not have lighting before) and then people realised we are here to contribute not just to take away.  I’ve now moved from Beijing to Bishan. I invite local people to my house and now we have a more natural relationship. 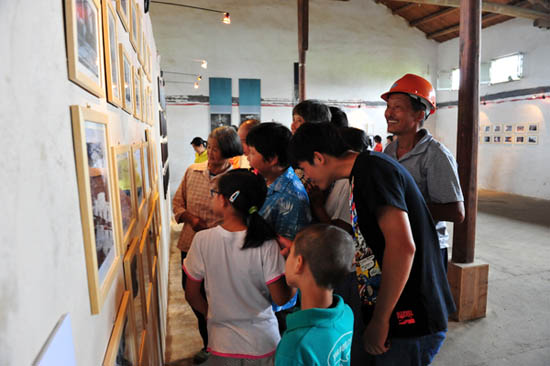 In cities like Beijing there is a terrible haze – lots of people want to leave and go to the countryside, but they can’t because there are no job opportunities. To go back to the countryside now you need a lot of money. I want to create more job opportunities. For example, I convinced the founder of the biggest bookshop in Nanjing, Librairie Avant-Garde, to open up a bookshop in Bishan. He has lots of resources and this can create job opportunities to encourage local people to come back from Shanghai and other cities. Every Chinese new year I organise a meeting for those young people who grew up here, but now work and study outside, to encourage them to set up enterprises in Bishan. In the future I want to set up a fund for this.

BW: Have you been inspired by any other communities outside China?

ON: I went to see a lot of different rural art projects to get ideas for Bishan, such as the Echigo-Tsumari Art Triennale in Japan and the Land Project in Chiang Mai, Thailand. I also learnt a lot from intentional communities in New Zealand – [communities that live and sometimes work together towards a common goal]. In the 1970s people from the US went to New Zealand to find cheap land and create their own utopia. This “back to the land movement” has been deeper and wider than in the US. Today groups of 20-30 people live together and make decisions by consensus.

I learnt three things from these communities. First, permaculture; Chinese traditional agriculture has these ideas, but farmers now have completely lost them. Second, co-housing; if 3-4 households live together and share work, washing clothes they use less water and energy. And finally, consensus decision-making – this is most important for Chinese culture, to practise democracy on a small scale and so people can share power.