At the gate of the incineration facility ­in Foshan, Guangdong province, a large screen displays live data on pollutants, including soot and sulphur dioxide. The Nanhai Solid Waste Processing Industrial Park is filled with greenery, as well as a large exhibition on environmental protection. Local residents, businesspeople and government officials often pay visits. The park even plans to apply for “industrial tourism destination” status.

This kind of facility is no longer unusual in China. The cities around the country that are busy building incinerators to deal with increasing quantities of waste are having to deal with public opposition to pollution.

Since 2017, China’s environmental authorities have been toughening up requirements for incinerators to monitor and publish pollution data, in hopes of improving the sector’s image. There will be further tightening in 2020, with stricter oversight by both regulators and the public. 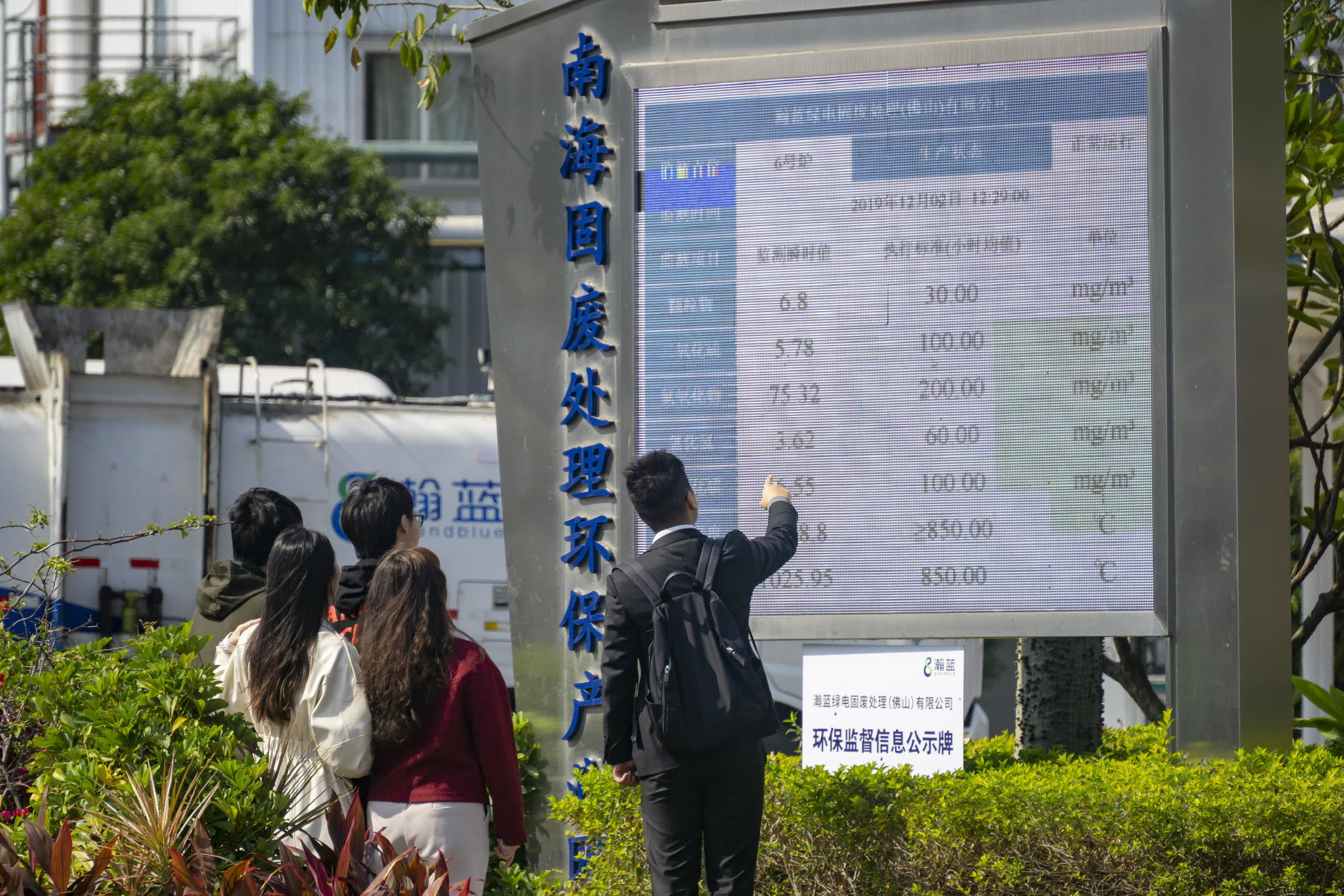 In 2019, around 600 incinerators of various sizes were planned or under construction in China. But variable construction quality and poor waste sorting means these plants are regarded as polluting, and opposed by local residents. The protests are a major headache for those choosing sites for new facilities.

In 2014, a waste-to-power project in Hangzhou, Zhejiang province, sparked clashes, with over 5,000 locals blockading an expressway. In 2016, an incinerator project in Zhaoqing, Guangdong, prompted thousands to protest outside the township government, which was then forced to halt acquisition of land for the plant.

Research examining 15 such protests between 2007 and 2016 found that some local governments keep information on planned facilities secret and even refuse to communicate with residents, leaving them with no channels to express their concerns and so exacerbating the situation. The study suggested that more transparency, participation and respect for the public’s right to know would reduce conflict.

After the protests in Hangzhou, a china.com.cn commentator said the only effective way to reduce conflict would be to bolster transparency and ensure both sides have equal access to information.

China started experimenting with ways to communicate with the public about incineration facilities in 2017, when the Ministry of Environmental Protection (now the Ministry of Ecology and Environment) required incinerators to install pollution-monitoring equipment. The data had to be displayed outside the plants in real time, and shared online with the environmental authorities. This “install, display, connect” approach aimed to “promote transparency of environmental data and win public approval”.

The system gained teeth this year when new regulations came into force ruling that monitoring data can be used as evidence of environmental law breaches.

These rules are necessary to lift the shroud of secrecy still hanging over much of China’s waste incineration sector.

A report, produced last year by environmental NGOs Wuhu Ecology Centre and the Institute for Public and Environmental Affairs, found that only 49 of China’s 428 waste incinerators publish automatic emissions data on their websites; 61 publish environmental data from their surroundings; and 99 publish data on dioxins, the pollutants of greatest concern to the public. The report also pointed out that the electronic displays are, in many cases, hard to see, and the online information very limited.

Lawyer Liu Xiang works with the Centre for Legal Assistance to Pollution Victims at China University of Politics and Law. He says that China’s Environmental Protection Law – the most powerful of all China’s environmental legislation – only “encourages” companies to be transparent with environmental data. But even if the authorities were to release “binding” standards or regulations, enforcement would remain very difficult.

A change of heart?

Announcing the new regulations for 2020, a Ministry of Ecology and Environment official said that while it used to be necessary to manually confirm breaches identified through automatic monitoring, there is now good enough data to do without this step. In short, the authorities can now use online monitoring to impose offline consequences. This will deter polluters, according to the official.

The official also admitted that the incineration industry has problems with local opposition, and the new regulations are designed to force polluting plants to close, so improving the image of the sector overall.

With the government pushing the industry to improve its public relations, some firms are taking note and action.

The Nanhai Solid Waste Processing Industrial Park has a history of disputes with nearby universities. Local residents, students and university staff used to complain about smells and pollution, and to demand the plant be relocated.

After much consideration, the park invested in new equipment to control ash, leachate, smoke and stink. It started displaying pollution data and it opened up its gates to the public. This comprehensive approach won over the local community and may provide a model for others to follow.

“The whole country is realising how important the waste issue is,” said the industry insider mentioned above. “More and more incinerators are making big investments to change their image. But it will take sustained work to figure out the best way to communicate with the public and correct misunderstandings.”

Nothing wasted: The waste-to-energy revolution in China