It’s seven o’clock in the evening Beijing time, but out on the Ganjia grasslands, in Xiahe county, the sun shows no sign of setting. Outside the yurts of Sirou village several marmots rest by their burrows, plump rears upturned, showing no fear of people.

I was enjoying this scene when Sangay Gyatso, sitting by my side, suddenly asked: “Do you know any Tibetan?”

“Yes! The ‘ta’ in tashi delek means ecological balance,” Sangay said, explaining that maintaining a balance between humans and nature is a central part of Tibetan Buddhist teachings. 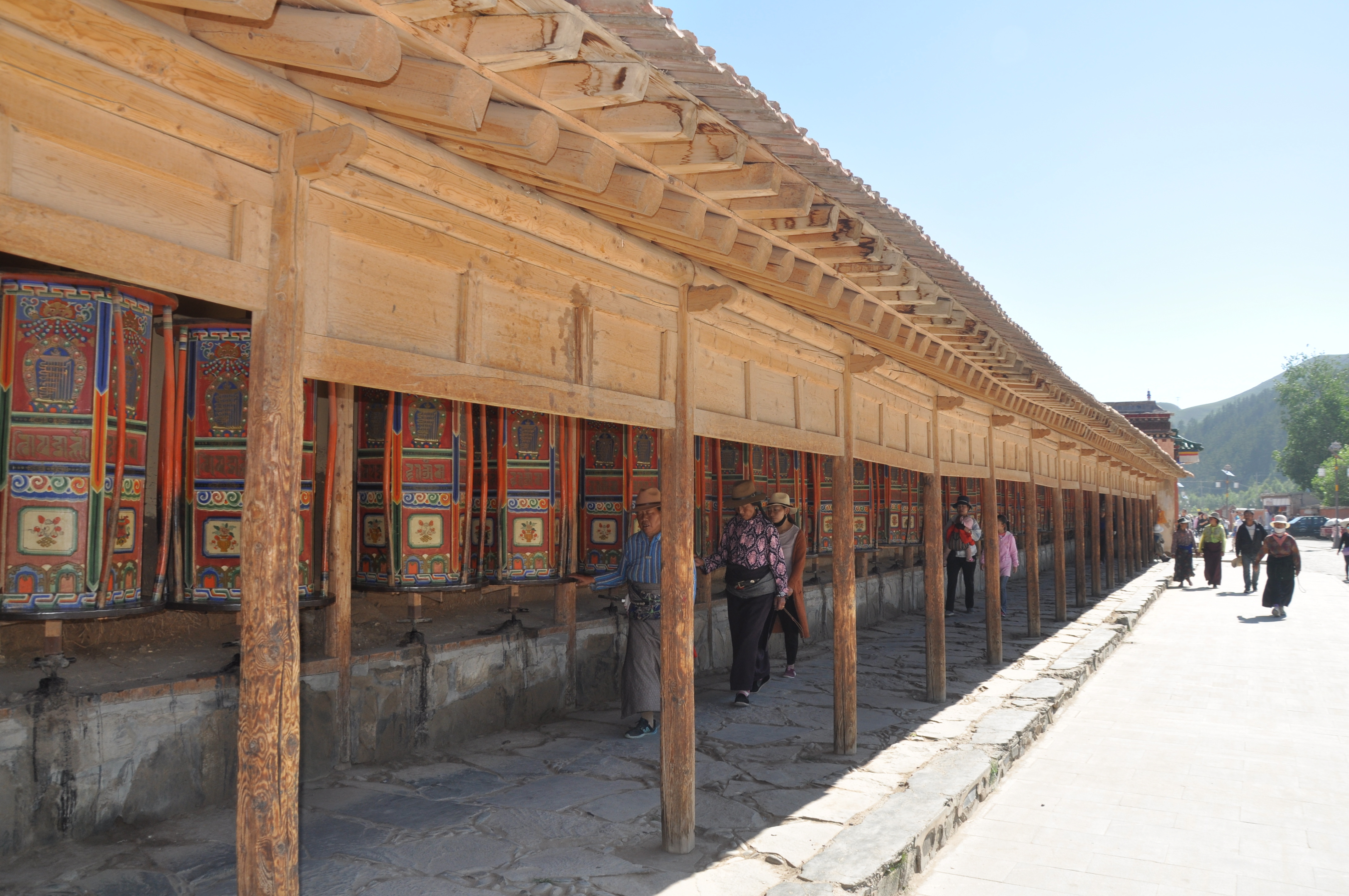 Sangay is a lama (a teacher of the Dhamma in Tibetan Buddhism), with a degree from the nearby Labrang Monastery. He believes that the ideals of environmental protection match up closely with the traditional culture and Buddhist thought he has spent years studying.

“The core of our traditional culture is the foundation and motive for my work on environmental protection here,” said Sangay.

And his main task when protecting the environment of his home? Collecting litter.

The Ganjia grasslands lie in the north-east of the Qinghai-Tibetan Plateau, a vast and fertile plain on the border of Gansu and Qinghai provinces, encircled by precipitous mountains. In recent years, livestock on the pastures have started dying inexplicably – and plastic food wrappers have been found in their stomachs.

In the past the herders ate meat and butter tea, natural foods, and any waste would naturally degrade. But with the growth of modern lifestyles, processed foods have become popular and herders discard the plastic packaging on the grasslands when they are grazing their livestock, polluting the environment.

Wandaike, a Tibetan youth from the village, said much of the litter he sees isn’t left by tourists, but by the herders themselves. 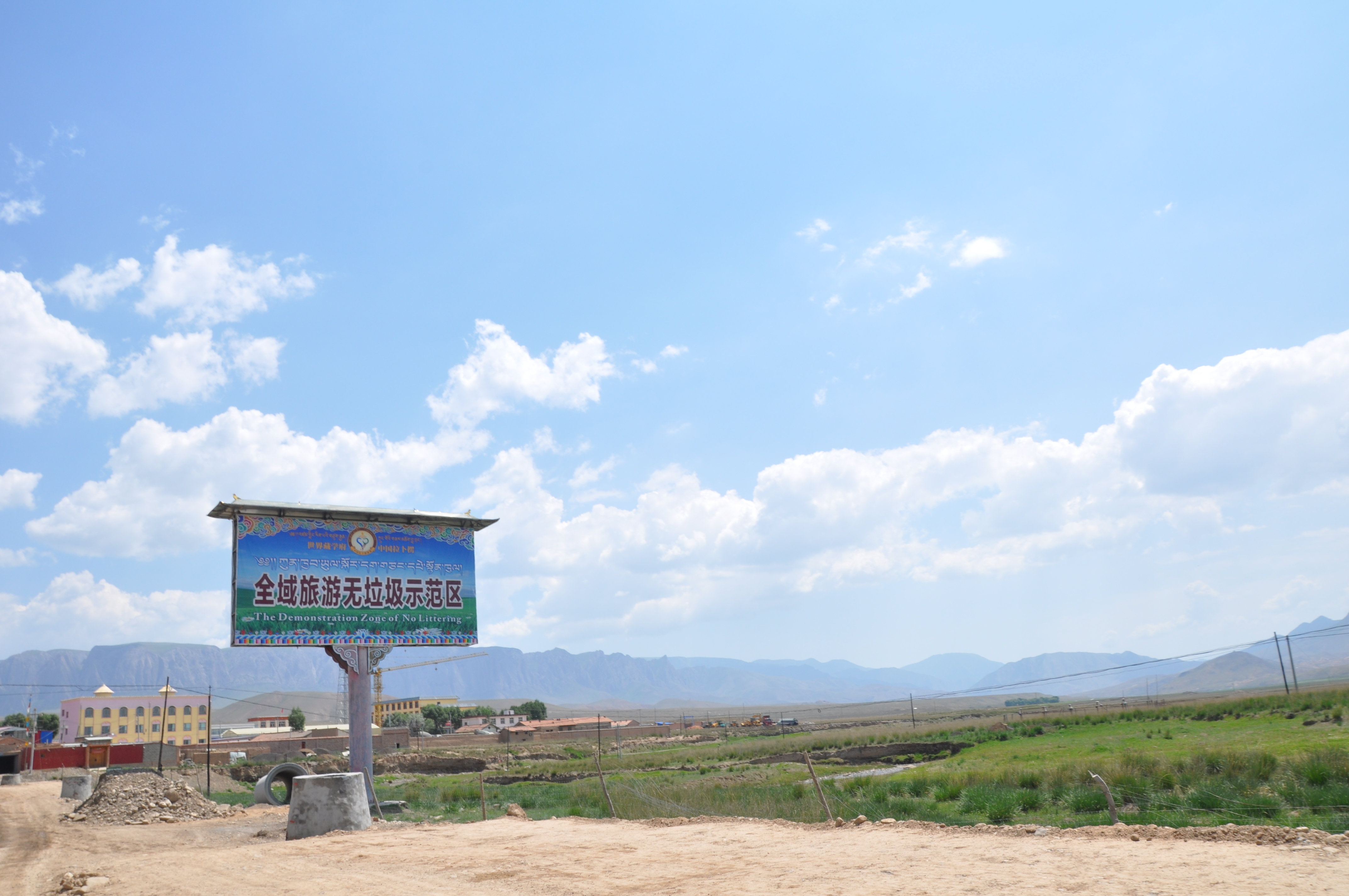 The roads in Xiahe near Labrang Monastery are dotted with signs proclaiming a “Model waste-free tourism zone”. (Image: Feng Hao)

In 2013 Sangay founded the Ganjia Environmental Volunteers Association, building on existing local volunteer teams that clean up in and around Waerta village about once a fortnight.

The villagers thought they were daft and their families didn’t understand. “Why are you doing that, you’re not getting anything in return?” they said. Local volunteer Leihexi found the criticism hard to deal with at first, but he continued with his task: “When you see the sheep cut open and their stomachs are full of plastic, then you’ll understand why we do it,” he explained.

Grasslands across the plateau have been facing the same problem. It’s a similar story in Yueguzongli, a grassland at one of the sources of the Yellow River.

Rigzin Dorje is a local of Qumarleb village and one of the founders of the Sprouting Grain Association, an environmental organisation. He said that organisations come from all over China to work on environmental protection, community building and conservation – but actually litter is the most pressing issue. 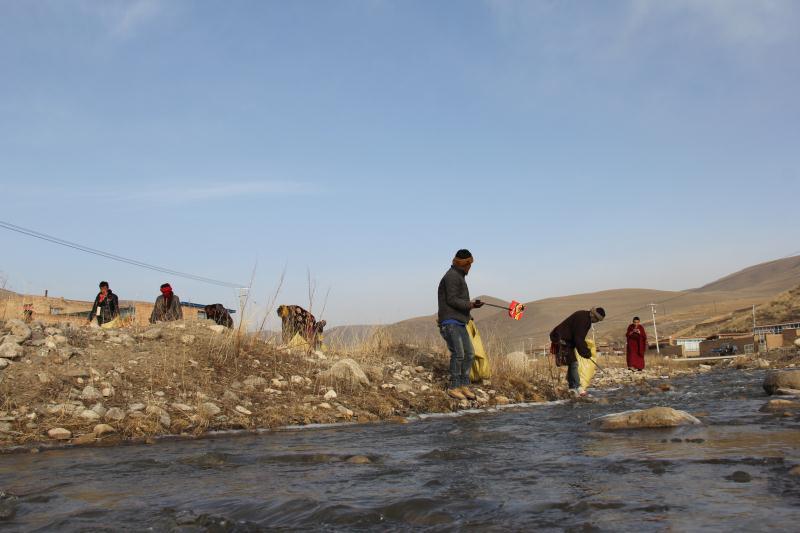 Rubbish is a particular scourge during the big annual horse-racing festival. Young people and children love to drink soft drinks as part of the celebrations, but when the races are over metal, plastic and glass containers are left scattered across the ground. These are eaten by livestock or slowly leech toxins into the ground, polluting nearby water sources. And up on the high grasslands, nobody collects the waste for recycling. The litter sits there forever, with huge environmental consequences. The Qinghai Tibet Plateau is the source of Asia’s major rivers and so this pollution will make its way downstream into China and other parts of Asia.

Wang Yongchen is the founder of Green Earth Volunteers, a group that documents the environmental problems along the course of the Yellow River and she has been visiting the river’s source for seven years. She explained that the rubbish problem has improved in recent years with the growth of volunteer litter pickers. In the past, waste was simply dumped by the river side, she said.

Gongbu Zeren is a lecturer in natural resource management at the Southwest University of Finance and Economics. He believes the Tibetan traditions of circumambulation of sacred mountains, and making sacrifices in sacred lakes, are contributing to the mounting litter problem.

Ritual offerings are placed in ceremonial bottles, sometimes made of plastic, or wrapped in a scarf and then thrown into a lake. Those bottles have become one of the main sources of pollution threatening the local ecosystem, he explained. Scarves made from synthetic fibres and plastic bottles can take over a century to break down, during which the pollutants released threaten local plants and wildlife.

Sangay and his volunteers in Ganjia are aware of the problem and focus on areas around water sources and sacred sites during their clean-ups. An increasing number of people come to worship at two sacred sites, the White Rock Cliffs and a limestone cave set within those cliffs. Volunteers have set up signposts and started collecting litter along a circumambulation route. Government waste collection and disposal systems simply don’t reach as far as these remote grassland sites.

The locals have gradually come to understand what the volunteers are doing and the team has expanded to include 230 people across the 13 villages on the Ganjia grasslands. Thanks to Sangay’s efforts, the association has won some funding to pay for the gloves, brooms, bags and transportation the volunteers need.

Transportation costs have always been a headache for Sangay. “If the government could invest a little more money and labour to build waste sorting points in villages, so waste could be handled centrally, there’d be a bigger impact,” he said.

But the local government doesn’t have the funding or the organisational capacity to set up such a system. Peng Kui, a conservation expert with the Global Environmental Institute, said that centralised systems, where waste is collected at the village level and transported to the county town for treatment, make economic sense in more populous areas, but are unsustainable and impractical in vast herding areas.

It isn’t that the local government doesn’t want to help, said Peng, there’s just nothing they can do. “It’s not even happening at the city and county level, so how can there be the spare capacity and funding for townships and villages?”

Bins alongside the highway are not in use yet. (Image:Feng Hao)

Peng explained that GEI’s “Clean Water Sources Programme” is trying a new approach. In the village of Maozhuang in Yushu, Qinghai, they formed a team of volunteers to teach people in schools, monasteries and villages how to sort and reduce waste. They then allocated volunteers to clean-up areas around water sources, so waste is regularly removed before finally being transported for sorting at a community waste facility. The volunteers separate and store recyclable materials until there is enough for a trip to sell them at the county seat. Non-recyclable materials are used as fertiliser, burned or buried. This method has reduced the burying of waste by 70%.

The serious problem of waste collection and disposal across the vast grassland area has attracted attention from commercial businesses. Taiwanese firm Miniwiz has designed the Trashpresso, a mobile and solar-powered unit which provide plastics recycling in remote areas.

In 2017 Miniwiz arrived in Zaduo county, the source of the Lancang River, and turned a week’s collected waste into environmentally-friendly building materials. Founder Huang Qiangzhi told chinadilaogue that the technology behind Trashpresso isn’t actually that advanced, but he hopes the project will show the local nomadic herders that their waste can be turned into something useful. 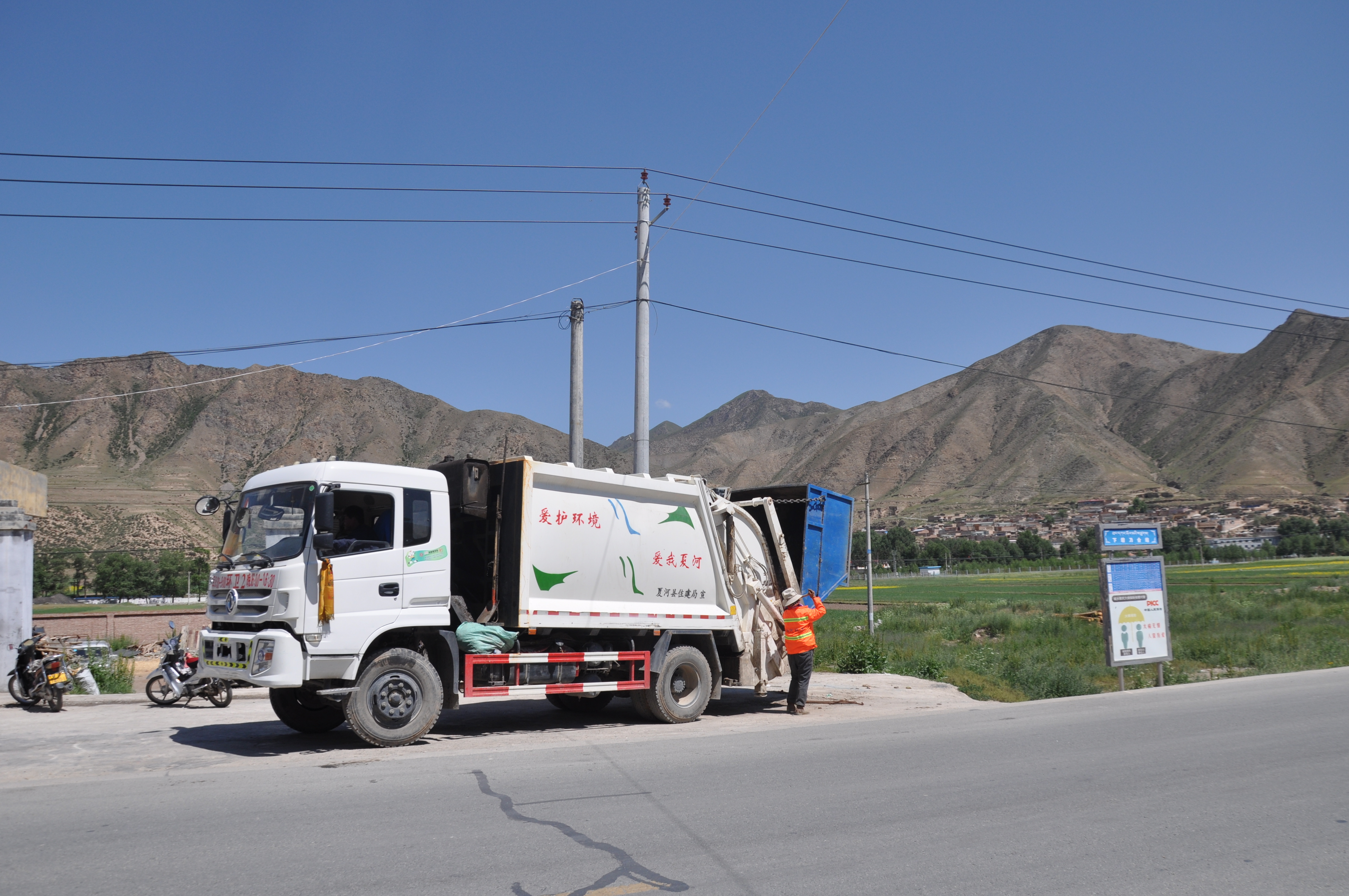 Government waste collection only covers the highways in this remote corner of the Tibetan plateau. (Image:Feng Hao)

Sangay is also trying to come up with new ideas. He believes the whole community will need to get involved if they want to significantly reduce waste. Recently, he and some PhD students from Lanzhou University have been working on a plan to get environmental experts to train his volunteers in more formal approaches to waste handling and sorting.

The grassland ecology in Qinghai once only supported yaks and herders, but rapid modernisation has changed all that, and old approaches will not work on new problems. But Sangay hopes that his innovative ideas and growing band of volunteers can restore the delicate ecological balance of the grasslands.

Journal from the Yellow River

“As a Tibetan, I see my culture being lost”