Covid-19 not only brought a health crisis to Latin America, but a looming and profound economic one. Yet it also offers the region a chance to respond with a green stimulus that can help decarbonise its economy, potentially with China’s help.

Latin America is facing the beginning of a deep recession, with a larger-than-expected contraction in regional gross domestic product (GDP), from 1.8% to 4%, due to the Covid-19 pandemic, according to the Economic Commission for Latin America and the Caribbean (ECLAC).

This situation will force governments to implement measures to stimulate their economies, using their own resources or attracting foreign investment, which can be used to drive greater climate action throughout the region.

China is a major trade and investment partner for many Latin American economies, largely investing in numerous high-carbon projects such as oil and mining. With the oil sector set for unprecedented losses given the crash in prices, redirecting investment towards green alternatives could help aid the region’s economic recovery and reduce its emissions.

A lot will depend on China’s own recovery, with activity only recently resuming after coronavirus infections peaked. Its capacity for outbound investment and the political will of Latin American governments, many of whose economies depend on polluting activities, will determine the sustainability of the path forward.

“There can be no stimulus plan in Latin America that does not consider climate and nature,” said Manuel Pulgar Vidal, WWF’s climate and energy leader and a former Peruvian environment minister. “Countries should focus on sustainable agriculture, clean transportation, and preventing harmful activities like fossil fuels.”

Albeit smaller than the expected coronavirus fallout, the global economic crisis of 2008 propelled China to the status of crucial economic actor in Latin America, in terms of investment, finance and trade. Regional GDP growth jumped from -1.9% in 2009 to 5.8% in 2010.

“If there is a new stimulus from China, like in 2008, it could be through its renowned green companies in sectors like infrastructure, transport and energy, creating cities with fewer emissions,” said Margaret Myers, director of the Asia and Latin America programme at thinktank the Inter-American Dialogue.

Green sectors such as renewable energy and clean transport have grown in Latin America in the last five years, partly thanks to Chinese investment. Among them, Chinese electric buses and large-scale clean energy projects, like the Cauchari solar plant in northern Argentina, stand out. 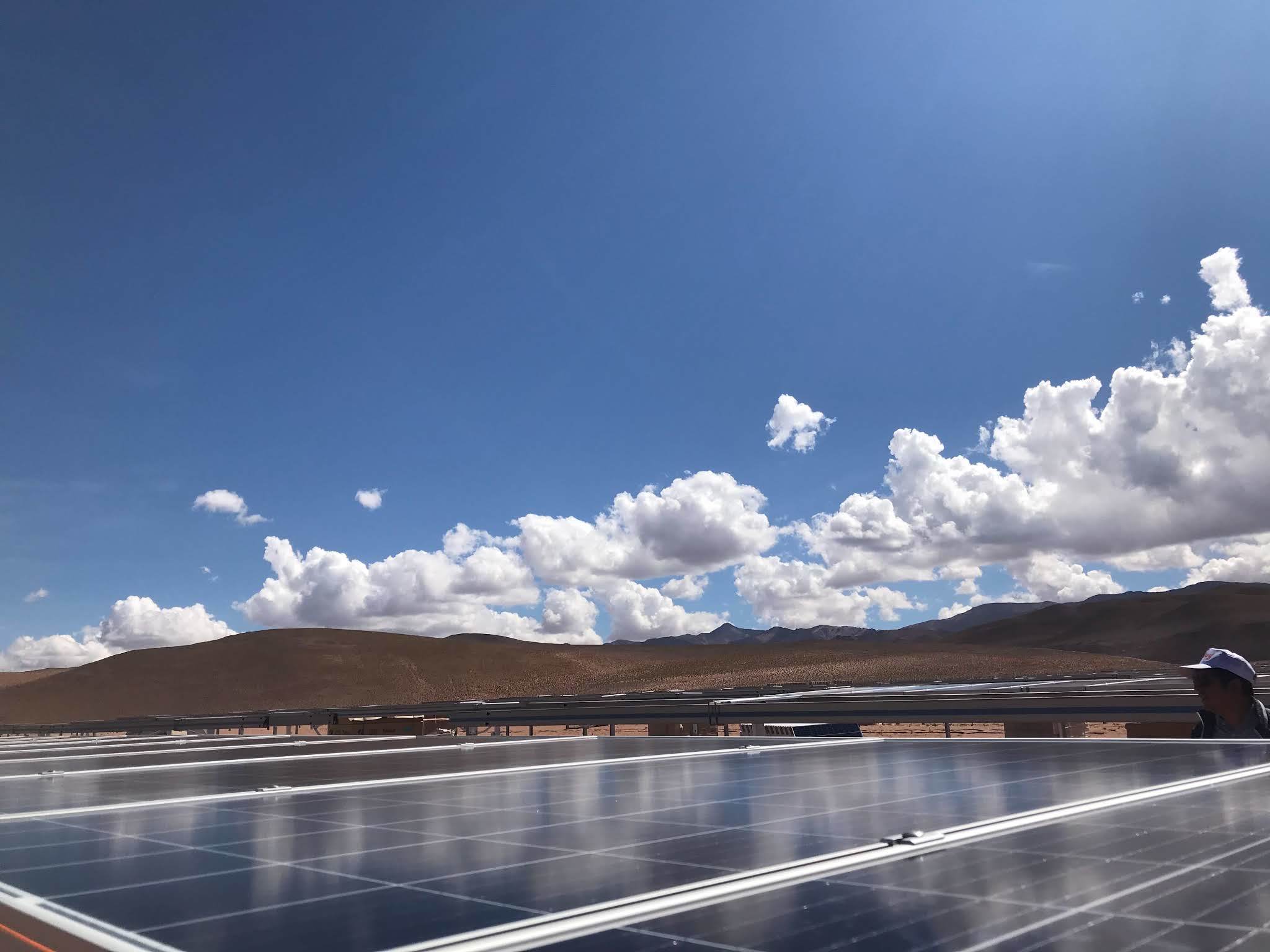 Such projects align with pledges in a 2016 Chinese Ministry of Foreign Affairs’ policy document on Latin America, which pledged to boost cooperation on environmental protection and climate change. Even so, the interest in natural resources and energy dominates.

“Latin America must leave its ‘extractivist’ model. The governments of the region can take advantage of the knowledge from China that they already acquired, especially in renewable energy. But they still don’t realise that,” said Leonardo Stanley, an Argentine researcher at the Center for State and Society Studies (CEDES).

The challenges of the green stimulus

A Chinese-led green stimulus in Latin America will first require China to overcome economic challenges at home that constrain its capacity for foreign investment.

In the first four months of the year, China’s economy contracted 6.8%, the worst figure since 1992 when quarterly statistics were first recorded, according to the country’s National Bureau of Statistics. The International Monetary Fund (IMF) expects China to grow 1.2% this year and rebound with 9.2% growth in 2021.

Myers says China could play an important role in the scope and speed of the recovery in Latin America, but that a repeat of 2008 is unlikely. China’s will to lift Latin America will also be a factor, she said.

In 2019, for the fourth consecutive year, the two main Chinese banks in charge of financing foreign investment have reduced loans to Latin America, according to an analysis by Boston University and the Inter-American Dialogue. However, Chinese outbound foreign direct investment – investments at the company level in the form of greenfield projects or mergers and acquisitions – continues to rise.

“China was central to the recovery of Latin America in 2008 and due to its relationship with the region it will surely play an important role in this new crisis again. However, it will be a very different one,” Myers said.

In February, China’s Ministry of Commerce and China Development Bank announced a new finance channel for projects that are part of global connectivity plan the Belt and Road Initiative and have been impacted by Covid-19. Only projects considered “high quality”, “legally compliant” and with “controllable risks” would be supported.

On 30 April, a group of 265 civil society organisations worldwide called for finance to flow only to projects that avoid negatively impacting people, biodiversity and the climate.

If the countries of the region want to continue exporting products with a high-carbon content, they will be rejected.

Another major obstacle is Latin American governments’ resolve to opt for non-polluting projects, despite the risk of major losses for flagship oil projects. Argentina and Mexico, for example, still seem to be banking on a fossil fuel-based recovery.

“Governments’ interest in advancing a clean matrix and a future without fossil fuels has yet to be witnessed. The investments in assets in the oil sector are not going to be worth anything in the not-too-distant future,” said Stanley.

The economies of Latin America, Asia, Europe and the US have started exploring the type of stimulus that should be used.

Over 1,000 activists, researchers and citizens signed an open letter to the US Congress calling for a list of green stimulus measures, while the European Council called for a green transition to be integrated into recovery measures. Others are calling for a “People’s Bailout”, using public funds to improve people’s lives.

“I hate to say ‘use this moment’ because the moment is so dire,” said Mijin Cha, senior fellow at US thinktank Data for Progress and co-author of the letter in the US. “But we know there will be a stimulus, so it’s up to us to make sure it’s one that invests in a low-carbon and more just future.”

The 2015 Paris Agreement aims to limit global warming to a rise of no more than 2°C by the end of the century. To achieve this, greenhouse gas emissions must peak as soon as possible and then drop to zero by 2050.

The transition to net zero emissions is technically possible in Latin America, according to a report by the Inter-American Development Bank (IDB). Carbon-free electricity, the electrification of industry and transportation, and greater energy efficiency are key ingredients.

Beyond this, the region would save up to US$621 billion annually if the energy and transport sectors achieved emission neutrality by 2050, a process that would also generate 7.7 million new jobs, according to a report by the UN Environment Program (UNEP).

“Decarbonising our economies is about a positive transformation to healthier, greener, resilient and more equal societies,” said Adrien Vogt-Schilb, senior economist at the IDB’s climate change division. “However, there is still a lack of awareness that carbon neutrality is technically and economically feasible.”

In April, Chile became the first Latin American country to propose new emissions cuts in its NDC. The government pledged to peak emissions in 2025 and achieve carbon neutrality in 2050. Chile’s new goals are no longer conditional on receiving international finance, as originally stipulated.

“Having good climate plans has nothing to do with the Paris Agreement. It has to do with the fact that the economy has already changed. If the countries of the region want to continue exporting products with a high-carbon content, they will be rejected,” said Pulgar Vidal.

“But we still don’t understand this message in Latin America.”

Attacks on ecosystem defenders in Latin America continue amid Covid-19