Villagers in North Sumatra, Indonesia, are waiting to hear if the World Bank will support their struggle against a zinc mine owner’s plans to build a tailings dam on unstable volcanic soils near their homes.

Back in October 2019, the community sent their complaint, against mining company PT Dairi Prima Mineral (DPM), to the World Bank’s private finance arm, the International Finance Corporation (IFC). In March last year, the IFC accepted the complaint because of the miner’s links to an IFC client, the Postal Savings Bank of China. This is the first time the office has accepted a complaint involving a Chinese financial institution.

The DPM mine is 49% owned by Indonesia’s Bumi Mineral Resources and 51% by the China Nonferrous Metal Industry’s Foreign Engineering and Construction Co Ltd (NFC). The NFC is part of the giant state-owned China Nonferrous Metal Mining (Group), which the Postal Savings Bank has backed with loans and bond issues totalling US$721 million. The link with the IFC dates back to 2015, when the financial institution took a US$300 million stake in the Chinese bank. These figures all come from an analysis done for the community by Inclusive Development International, a US non-profit that specialises in tracing the finance behind investments.

With DPM seeking to expand the mine beyond the scope of its original plans, villagers are increasingly worried about the environmental and health impacts it will have once fully operational. The mining concession contains roughly 5% of the world’s known zinc deposits. DPM has held the concession since 1998, and the NFC became the majority stakeholder in 2018. The concession covers 24,636 hectares, 16,000 hectares of which are protected forest areas.

Once operational, the mine’s output will be shipped to China for use in making cars, aeroplanes and construction materials, according to documents obtained by Inclusive Development International. The NFC already sells zinc to another vast Chinese company, the Wangxiang Group, a car-parts maker that supplies companies such as Volkswagen, Ford and General Motors.

Disaster in the making

At the heart of the community complaint is a tailings dam for by-products from the mine. Initially located next to the mine’s processing facility, DPM’s plans have now changed, moving its location to within a few hundred metres of the nearest village. The move could result in a deadly disaster, warn international analysts.

The village of Sopokomil would be at risk if the new tailings dam, now planned for just a few hundred metres away, goes ahead (Image: Tonggo Simangunsong)

Richard Meehan, a civil engineer who teaches at Stanford University and specialises in assessing risks from earthquakes, subsidence and floods, has expressed concern that the dam could fail, triggering a deadly mudslide.

Meehan said DPM’s own environmental impact assessment lacks information and transparency but does acknowledge that the site’s soil is volcanic ash – a soil that is soft and weak. Tailings dams in earthquake zones need “a good foundation, a bedrock foundation,” he stressed in a YouTube video about the threat to the villages of Sopokomil and Parongil.

Meehan cited the 2014 Mount Polley mine disaster in Canada as an example of how soft soil can lead to a dam failure.

Tremors could also rupture the dam’s lining, contaminating surrounding water. “The facility lining will break and toxic materials leak into the groundwater, or the dam itself will collapse, resulting in a flood of poison. One of the scenarios is that Sopokomil hamlet will be washed away by a wave of toxic mud. That could happen without warning,” said Meehan in a written statement.

Hydrologist and geophysicist Steven Emerman said in his testimony to the IFC: “The design of the tailings dam to accommodate only a [once in] 100-year flood is inconsistent with international guidelines and Indonesian regulations.” The dam wall needs to be robust enough to withstand a once in 10,000-year flood, he wrote in the statement, seen by China Dialogue. He also noted that locating the tailings dam this close to a populated area would be illegal in China.

Although not yet fully operational, villagers told China Dialogue that the mine’s ongoing exploration and development work does not meet safety standards, and has already caused water contamination and flash flooding.

Sugianto Hasugian, a resident of Bongkaras village, witnessed lax safety practices during the two years he worked in a DPM drilling unit. Liquid waste was allowed to leak out into watercourses when teams drilled to a depth of 1,000 metres near Bongkaras. “It turned out that the waste stream reached the river and even the settlement,” he said.

Villagers in Bongkaras believe recent health issues are the result of contamination from the mine of their main source of drinking water (Image: Tonggo Simangunsong)

Drinking water for Bongkaras comes from the nearby Sikalombum River, along with fish for consumption and sale. Farmer Loris Bancin said residents have begun experiencing unfamiliar health issues, such as skin problems and internal pain: “I am sure villagers are getting sick frequently because of the water.”

In 2018, six residents of Silima Punggapungga Dairi subdistrict were killed when a flash flood hit Bongkaras and Longkotan villages, close to the mine.

Residents believe the floods were caused by forest clearance on the surrounding hills. “Since the drilling started in 2010, forested areas in the hills have been cut down for drilling shelters,” said Sugianto. The fear of it happening again remains.

In addition to the tailings dam, residents, supported by JATAM, a network of Indonesian NGOs dealing with mining issues, are opposing several other proposed revisions to DPM’s original 2005 environmental impact assessment – revisions that the mining company is currently seeking permission for from the Indonesian government. One of the most controversial of these is a new location for the mine’s explosives warehouse.

The warehouse has, however, already been built in the new location, 50 metres from homes in Longkotan village. “What if one day the warehouse exploded,” asked villager Mangatur Pardamean Lumbantoruan.

“DPM should be subject to sanctions for building an explosives storage facility without approval near a settlement,” said Juniaty Aritonang, a coordinator with non-profit BAKUMSU (the Institute for Legal Aid and Advocacy for the People of North Sumatra).

This new explosives’ warehouse has been built right next to the village of Longkotan. Permission to use this location is tied to a revision to DPM’s environmental impact assessment that has not yet been authorised. (Image: Tonggo Simangunsong)

“We asked the Indonesian government not to grant a [mining] permit to the DPM mine and to refuse to approve the addendum they’ve proposed,” said Muhammad Jamil, from JATAM’s legal division. The government have not responded, he said.

There has been no answer either from the Indonesian Ministry of Environment and Forestry to a similar request from BAKUMSU.

As well as appealing to the Indonesian authorities, JATAM and BAKUMSU joined forces, along with Inclusive Development International, to support villagers in their bigger complaint to the IFC. The campaign has been coordinated by Yayasan Diakonia Pelangi Kasih (YDPK), a local advocacy NGO based near the mine.

As well as accusing DPM of failing to comply with its original plans for the mine’s development, as outlined in its approved environmental impact assessment, the complaint to the IFC goes further. According to YDPK, the community also accuse DPM of failing to conduct a proper consultation about the environmental and social risks of the proposed revisions, including the threat to their safety from the tailings dam. 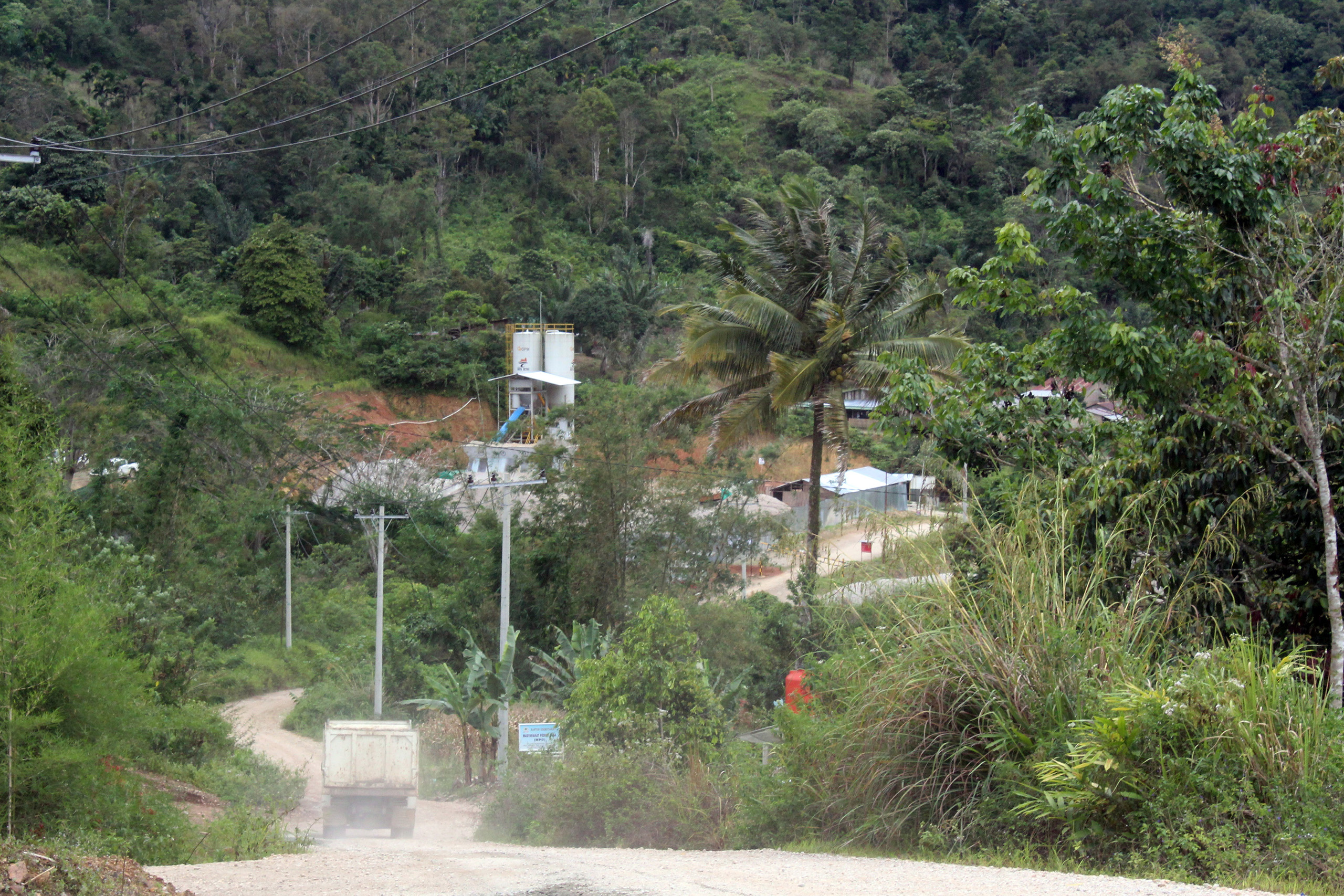 Since Chinese company NFC took a controlling stake in DPM in 2018, development work at the mine has started in earnest, with full operation anticipated as soon as next year. Local residents say DPM has failed to consult with them about changes to the mine’s development plans, and much of the work currently ongoing goes beyond the original plan authorised by the Indonesian government. (Image: Tonggo Simangunsong)

The IFC’s Sustainability Framework sets out how World Bank and IFC financial partners should promote sound environmental and social practices, and encourage transparency and accountability.

The complaint argues that the IFC’s own web of loans and shareholdings means it is indirectly backing DPM through its equity investment in the Postal Savings Bank of China. So, if DPM is breaking IFC rules, the IFC is too and needs to resolve the problem.

Since accepting that the complaint meets its eligibility criteria, the IFC’s ombudsman has “undertaken its assessment to determine whether the case is suitable for dispute resolution or if it should be transferred to a compliance investigation,” said David Pred, executive director of Inclusive Development International.

Pred expects the ombudsman to publish its assessment report soon, and hopes this will spur the Postal Savings Bank of China to act, and bring the Chinese mine owner (the NFC) “to the table to address the communities’ serious concerns about the environmental, social and safety risks.”

But Pred said that so far, the Postal Savings Bank has “not expressed an interest in dialogue” or in encouraging its client, the NFC, to join a mediation process with the villagers.

If this apparent lack of willingness to comply with the IFC’s environmental and social standards continues, “the IFC ought to cut its ties to the Postal Savings Bank of China,” said Pred.