The protesters who took to the streets of Jakarta, Bandung and other Indonesian cities in October 2020 were diverse to say the least. Islamic leaders, dressed in white jalabbiyah, stood with scantily clad Instagram influencers. Trade unionists, indigenous leaders and environmentalists rubbed shoulders with the National Anti-Communist Alliance.

“There’s 275 million people in this country, and nearly every one of them has a reason to be pissed off,” said Kirtika Sembiring, a 22-year-old student who organised a sit-in in Surabaya, Indonesia’s second largest city. “Jokowi’s government has never cared about farmers and fishermen. This time, even the rich landlords and businessmen are set to lose out.”

She – and hundreds of thousands of Indonesians like her – were protesting President Joko “Jokowi” Widodo’s latest raft of neoliberal reforms, the Omnibus Law on Job Creation. The massive 1,028-page bill amends, annuls and adds to 79 existing laws. Critics of the bill, including Human Rights Watch and Amnesty International, argue the sweeping changes come at the expense of workers’ rights and environmental protections.

“From the beginning, there was no consultation,” says Tommy Pratama, executive director of Traction Energy Asia, a Jakarta-based NGO. “It was written behind closed doors, and environmental organisations were not allowed to join the discussion. Most of the spirit for the omnibus law is to provide a red carpet for the oligarchs, especially those coming from dirty energy like coal mining.”

In an age when sustainability is growing as a determining factor in investment decisions, it’s not just Sembiring and her fellow students who are turned off by the omnibus. A group of 36 investors, representing US$4.1 trillion in assets, criticised the bill for “severe environmental, human rights and labour-related repercussions that introduce significant uncertainty and could impact the attractiveness of Indonesian markets.”

The legislation is partly the result of a promise Jokowi made when he was re-elected in 2019 to tackle poverty head-on and deal with the country’s infrastructure gap. In his post-election address he warned that, to create jobs, Indonesia “must invite as much investment as possible”.

“Anything that obstructs investment must be trimmed, such as slow or complicated processes. I guarantee that I will chase, I will control, I will check and I will beat them if necessary!”

Indonesia is in need of growth. As the country has struggled to deal with the coronavirus pandemic, it has hit dire economic straits, with GDP shrinking by 2.1% to a three-year low. Yet Bhima Yudhistira, from Indonesian think-tank the Institute for Development of Economics and Finance (INDEF), believes that foreign direct investment never dipped during this period.

“Investment is always going to increase, with or without the omnibus,” he says. “The problem, which the bill actually adds to, is the quality of that investment.” The bill is against the grain because Indonesia is aiming for middle-income classification by 2045, with the economy transitioning away from labour-intensive work like manufacturing towards white-collar services.

Even when outside investment does create jobs, it’s not clear whether it benefits those at the coalface. Take, for instance, one of Indonesia’s biggest employers, ride-hailing service Gojek. Despite billions in backing from Facebook, Microsoft, Paypal, Alibaba and Tencent, it hasn’t created stable employment for any of its one million drivers. Instead, it’s exposed them to the vagaries of the gig economy: uncertain income, little opportunity to upskill or advance, and an opaque employer–contractor relationship. Not that there’s much to miss out on anymore. Thanks to the omnibus, employees are no longer guaranteed:

While foreign cash might not serve as a panacea for Indonesia’s woes, many businesses aren’t exactly against it either. In the opinion of Ahmad Syarif, senior analyst with BowerGroupAsia, Chinese firms stand to gain the most from this deregulatory approach.

“Take mining, for example, one sector with significant investment from Beijing. Until now, operations have been hampered by all sorts of policy risks. Local content rules for operations, domestic market obligations for the resources themselves, and the mixed role of local and central government.”

Foreign direct investment from China, including Hong Kong, jumped 11% last year to US$8.4 billion. While Jokowi has, so far, been conspicuously reluctant to share state-owned infrastructure with Beijing, cooperation on the Bandung-to-Jakarta bullet train and the Batang Toru hydropower plant shows the door remains open to Belt and Road Initiative participation. 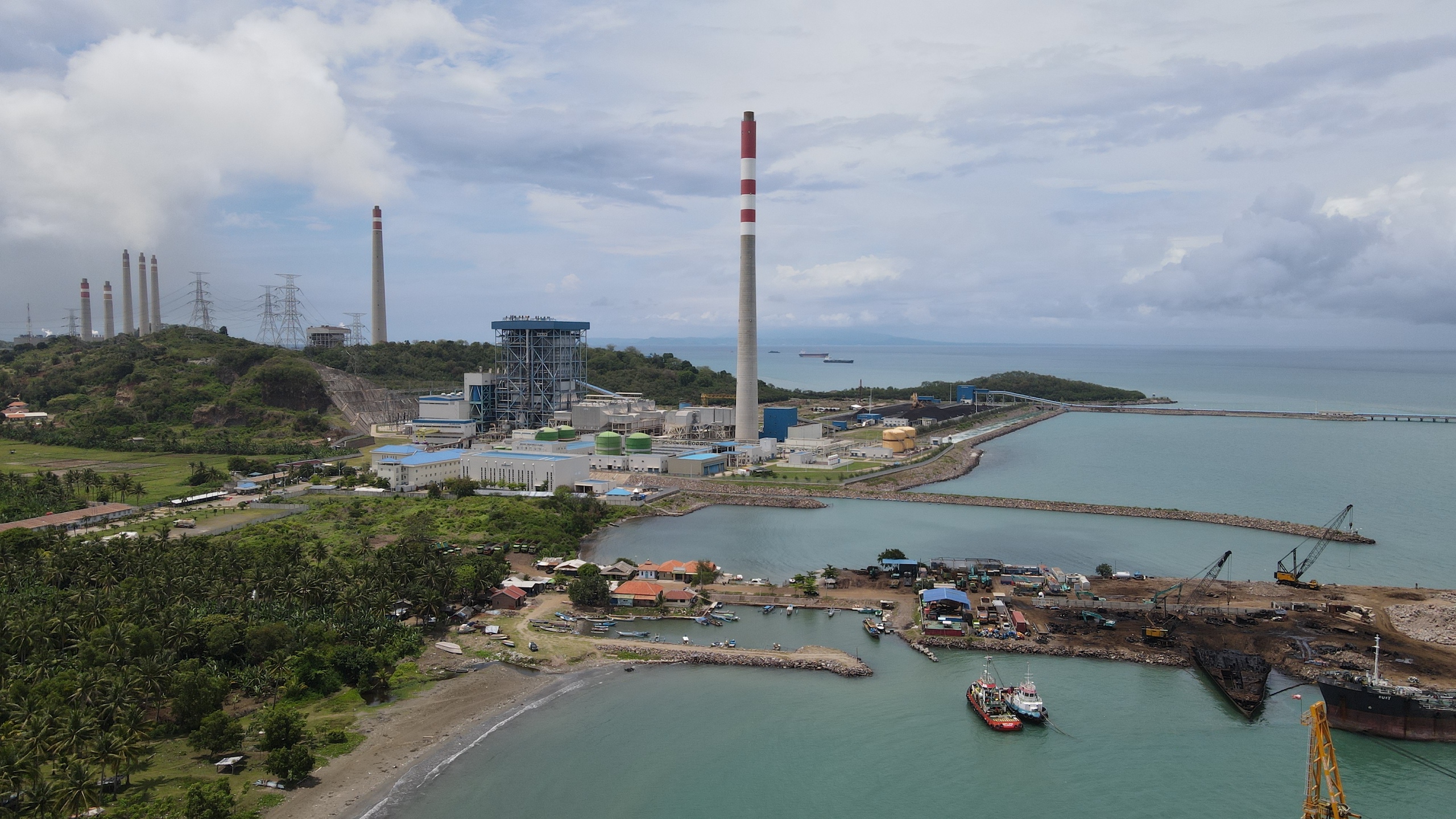 The 4-gigawatt Suralaya coal plant on the island of Java, Indonesia. The most recent expansion to the plant was completed in 2011, built by a consortium of three Chinese corporations and an Indonesian construction company. (Image: Adi Renaldi / China Dialogue)

Asep Komarudin, a senior forests campaigner with Greenpeace, is concerned about the impacts of lower environmental and social safeguards. “Chinese investors in the extractive and energy industries are frequently involved in corruption,” he says, citing the Riau-1 coal-fired power plant and the Celukan Bawang port lawsuits. “There’s a strong suspicion that this bill is only there to accommodate these sorts of investors. To let them pay local workers less, make them work longer hours, and skirt around environmental protections.”

A loosening of labour laws – not to mention the advantages given to state-owned enterprises – could turn off Western investors, many of whom have to comply with strict ethical guidelines. Another concern is that the omnibus “weakens the spirit of eradicating corruption,” according to Komarudin, after Jokowi moved in 2019 to curb the powers of the Corruption Eradication Commission.

In fact, the new sui generis sovereign wealth fund established under the omnibus, the Indonesia Investment Authority (LPI), won’t be overseen by the appropriate anti-corruption body. The over US$20 billion already in assets should be monitored by the country’s peak audit watchdog, the Supreme Audit Agency (BPK). But a recent analysis from Katadata raises concerns about whether this oversight is sufficient.

It’s not investment policy, though, that got Sembiring and her classmates to take to the streets. It’s more a president who, after pushing for palm oil firms to be prosecuted after peatland fires broke out in 2015, has now lifted the assumption of legal liability for fires occurring on their concession areas.

The group of coal-mining giants, another key environmental offender, is contributing to the country’s rapid deforestation. In 2020 alone, the country lost 115,459 hectares of forest cover, an area the size of Los Angeles. While most agree that this trend will accelerate under the omnibus changes, Jakarta-based think-tank Madani goes further, predicting that it paves the way for the total destruction of natural forest cover in Riau, Jambi, South Sumatra, Bangka Belitung and Central Java provinces.

The key provision they base this on is the repeal of a current regulation that requires at least 30% of forest area to be conserved for each watershed area or island. There’s also the permit acquisition process, which in the past has acted as a brake on environmental exploitation carried out by both industries. Academics and the public played a role in approving or denying project permits, but the omnibus has edged them out of environmental impact analyses – and, in some cases, the analysis has been scrapped in its entirety.

Investment is always going to increase, with or without the omnibus. The problem is the quality of that investment.

Bhima Yudhistira, Institute for Development of Economics and Finance

These requirements were hardly ever a burden on big business: in South Kalimantan province, over a third of the land is earmarked for coal permits. For indigenous peoples living in those areas, though, fighting the granting of such permits will now border on the impossible. Cut out from the process prima facie, they will have to plead their case with Jakarta, rather than the provincial government.

“The exaggerated worship of large-scale investment all this time has proven to be very harmful to indigenous peoples,” said Rukka Sombolinggi, the Secretary General of NGO the Indigenous Peoples Alliance of the Archipelago (AMAN). “The result is that indigenous territories are grabbed and permission is granted for investment by the forestry, plantation/farming, mining and other sectors.”

The group of 36 investors was just as dismissive: “Efforts to stimulate foreign investment by weakening regulations, such as easing restrictions on clearing land in palm oil concessions, are counterintuitive in light of investors’ growing desire for environmental protections and rising international demand for responsible commodity production and regulation on imported deforestation.”

Correction note: The original version of this article referred to Trend Energy Asia. This has now been corrected to Traction Energy Asia.

Indonesia has a long way to go to produce nickel sustainably