Chinese foreign direct investment in Latin America has now surpassed US$110 billion (743 billion yuan) and continues to rise fast. In fact, annual flows of Chinese FDI to countries such as Brazil now rival those from the United States or Spain.

In our new Atlantic Council – OECD Development Centre report, Chinese FDI in Latin America: New Trends with Global Implications, we shine a light on an area that was previously hard to understand because of unclear data. Annual investment flows by Chinese firms to the region have averaged over US$10 billion over the previous five years. This new reality completes an economic trifecta, establishing China as a major partner for trade, lending, and now, investment for Latin America. 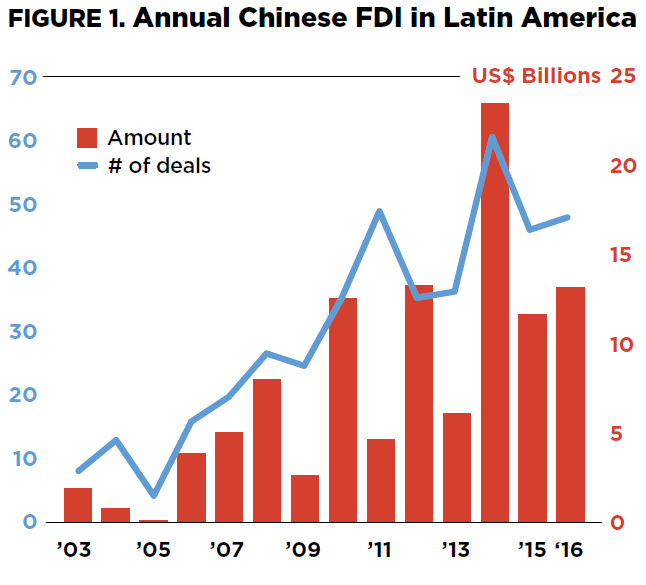 In a speech to the leaders of the Community of Latin American and Caribbean States (CELAC) in Beijing in January 2015, Chinese President Xi Jinping said Chinese companies will invest US$250 billion by 2025. Our report shows they are almost halfway there. Several factors explain this: the government is encouraging Chinese firms to invest abroad through its “going out” strategy; the country has renewed its focus on Latin America, as evidenced by a 2016 policy paper laying out a strategy for engaging with the region; and Chinese companies have awakened to the investment opportunities Latin America has to offer, and are more experienced in the region.

Alongside the rapid rise in investment, the nature of Chinese investment in Latin America is changing as well, with the service sector receiving over half of all investment since 2013. In fact, industries such as finance, electricity, renewable energy, and transport have all received more than US$4 billion in Chinese investment. This is an important rebalancing from a focus on capital intensive but low employment areas of the economy such as oil and gas, mining and metals.

The sharp rise in Chinese investment in renewable energy is particularly interesting. The sector has received over US$6 billion since 2013, with China’s Three Gorges Corp leading the way. Wind and solar have also attracted an increasing amount of investment.

Given Latin America’s leadership on green energy, and China’s growing attention and need for it, there is plenty of scope for further investment. From factories that assemble solar panels to the creation of wind farms and hydro dams, Latin America and China should form a “green” working group to collaborate on shaping the future of these industries.

Elsewhere, Latin America’s automotive industry has received over US$10 billion in investment, as Chinese firms race to capture market share in the Americas. However, these investments are concentrated in Brazil, Mexico, and Argentina. This is consistent with overall Chinese investment in Latin America, focused in a just few countries, including Brazil, Peru, Mexico, Argentina, and Bolivia. Also notable is that the vast majority of Chinese investment is from state-owned enterprises (SOEs), comprising over 80%, contrary to Chinese FDI in the US and EU, which come from mainly private Chinese firms.

State-owned enterprises comprise over 80% of investment into Latin America

Governments across Latin America are welcoming Chinese investment. Mexico has facilitated this in the auto industry, as well as signing new oil and gas exploration contracts. Brazil has encouraged Chinese investment in the electricity industry, and has been duly rewarded with nearly US$9 billion, mainly from the State Grid Corp of China. This includes purchases of hydropower dams and transmission lines.

A growing portion of these investments are mergers and acquisitions, showing Chinese firms are finding partnerships with Latin American companies increasingly attractive. Chinese banks have been especially active, acquiring or investing in over 20 financial firms in Latin America, including: BTG Pactual, Banco BBM, BicBanco, and Standard Bank.

Chinese investment in the extractive sector remains large, so governments in Latin America should strengthen their environmental laws and increase accountability for compliance, with stronger monitoring mechanisms. It’s ultimately their responsibility to ensure investments are sustainable and environmentally friendly.

Will China gain from a US-Latin America withdrawal?