Already highly vulnerable, the South Atlantic marine ecosystem could collapse if a Chinese-funded fishing port in the Uruguayan capital of Montevideo goes ahead as planned, conservationists fear.

The controversial US$200 million port investment proposed by Shandong BaoMa Fisheries Limited would service Chinese long-distance fishing fleets, enabling them to prolong expeditions in waters off Uruguay and Argentina, which are plagued by overfishing by vessels from around the world.

“The pressure on [fish] stocks that are already exploited to the limit or over-exploited will increase,” said Milko Schvartzman, a marine conservationist, on the potential impacts of the port project.

Uruguay expects to become an “important pivot” of China’s Belt and Road Initiaitve construction plan, said Gerardo Amarilla, president of the Chamber of Representatives of Uruguay’s National Congress on a visit to Beijing in January. The announcement followed on the heels of Uruguayan President Tabare Vazquez meeting with counterpart Xi Jinping in October 2016 to establish a strategic partnership based on “respect, equality and mutual benefit,” according to Chinese news platform Xinhua.

Large squid stocks attract international fishing fleets, many of them illegal, unregistered, or unregulated (IUU), to the waters of the South Atlantic off the eastern shores of Uruguay and Argentina. Squid is a vital link in the food chains that underpin these marine ecosystems, providing food for various fish species, penguins, sea lions and even sperm whales.

Shandong BaoMa Fisheries (part of the Shandong BaoMa conglomerate) is in the “final stages” of negotiations with the Uruguayan government for the purchase of 28 hectares of land in the eastern outskirts of Montevideo, local news outlet La República recently reported.

The proposed port would include a shipyard, refueling station and freezer storage. Years in planning, the project was given renewed impetus during Uruguayan president Tabaré Vázquez’s visit to Beijing in October 2016.

But the Montevideo port, which could be a central part of bigger plans to develop the city’s role as a major logistics hub for the import and export of goods between China and Latin America, concerns conservationists.

Schvartzman said numbers of penguins and sea lions are in decline in the South Atlantic owing to a lack of food, namely squid. According to the FAO, international squid supplies dropped by 17% in 2015, causing squid prices on the Chinese market to double with further rises expected as stock dwindles. While penguin populations are estimated to have dropped by a third since the 1980s. Increasing water temperatures, which affects their prey, is also a factor.

Meanwhile, Uruguay’s neighbour Argentina has complained about the ongoing practice of IUU fishing in its exclusive economic zone (EEZ) in the South Atlantic, Schvartzman added.

The area has some of the greatest marine biodiversity on the planet. The meeting of warm ocean currents from Brazil with cold water from the Falklands (Malvinas) islands, above a vast seabed plain which plunges steeply at the edge of the continental shelf, have allowed marine life to prosper in many forms.

Jacqueline Savitz, from marine advocacy groups Oceana and Global Fishing Watch said: “When fishing vessels that remain at sea for many months at a time can hide the amounts of fish they are catching and selling, it makes it difficult to enforce sustainable fishing laws.” (This practice is known as transshipping).

Dai Xiaojie, a researcher from Shanghai Ocean University, acknowledged that squid is the main target for Chinese vessels in the South Atlantic but added that it is a species that recovers rapidly. Dai said squid is not currently overfished in the South Atlantic. China’s total squid imports are estimated to be worth US$500 million annually.

Schvartzman said fishing for squid and cod does not only impact their numbers but also harms populations of other fish, dolphins and albatross that are caught accidentally. He added that the discharge of pollutants of many long-distance fleets is unregulated and that this, too, has serious environmental consequences.

Montevideo’s port is the world’s second most visited destination by refrigerated cargo vessels, known as reefers, according to a recent report co-authored by Oceana. 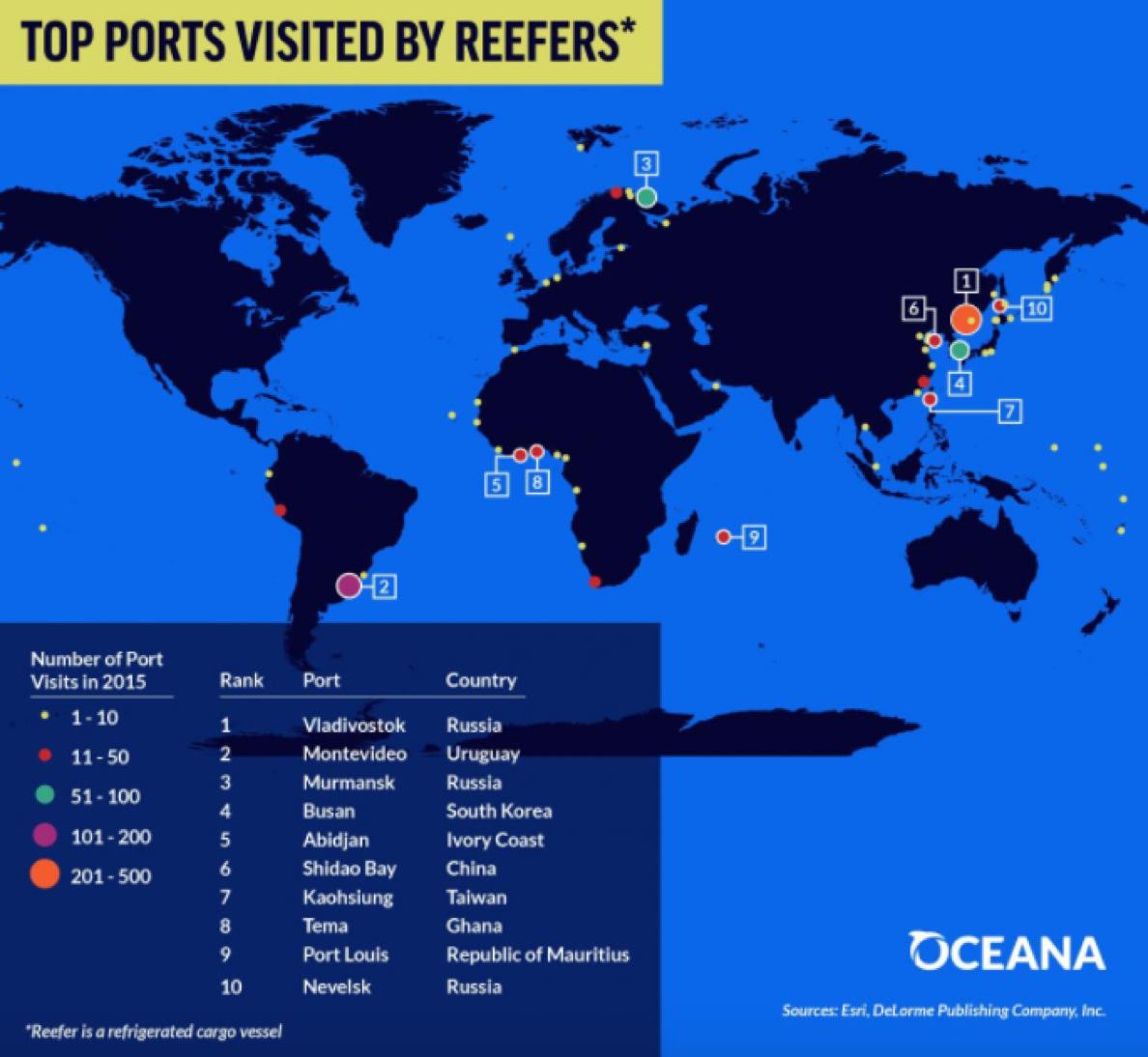 The report tracked 90% of the world’s largest reefers. Reefers participated in around 5,000 suspected transshipping incidents between 2012 and 2016, according to Oceana’s report, with a further 86,000 “potential” incidents recorded in the same period.

AIS signals enable fisheries to identify and monitor transhipment patterns globally and expose what is a largely invisible practice. However, collecting comprehensive data on transhipping is problematic as vessels often turn off their AIS when they don’t want to be detected.

In addition to the purchase of land, the Shandong BaoMa’s project could include a free trade zone that opponents say would impact Uruguayan and Argentinian sovereignty over a stretch of the Rio de la Plata (a river and estuary formed by the confluence of the Uruguay and the Paraná river) and limit their ability to regulate overfishing. Neither party has confirmed the inclusion of the free trade zone but the rumours have sparked fears in Uruguay.

Uruguay XXI, the country’s investment and export promotion agency offers incentives to investors backing the logistics sector, including tax-breaks and “the free circulation of goods without [the need for] authorisation or formal processes.”

Daniel Gilardoni, director of Uruguay’s National Directorate of Aquatic Resources (DINARA), said: “Dinara understands that foreign investment is important, but this cannot compromise the control that Uruguay should exercise over fleets that operate in the region.”

A petition opposing the Montevideo port hosted by Greenpeace’s citizen campaign platform “Hagamos Eco” (Let’s Echo) had received over 5,000 signatures at the time of writing.

While vessels from mainland China account for around 40% of IUU fishing in the South Atlantic, South Korea (20%) and Spain (15%) also have a heavy presence in the region, according to Schvartzman’s research. The port would generate the same impact and controversy were it to come from any one of these four countries, which consistently disregard rules on conservation, he added.

President Vázquez last year agreed to upgrade diplomatic ties with China to that of a “strategic integral partnership”, a status already enjoyed by regional partners including Argentina, Brazil, Chile and Ecuador.

China is the top destination for Uruguayan exports, which consist mainly of products such as meat and wool, but also fish and milk, and are worth some US$2 billion annually. The two countries are also negotiating a free trade agreement. Tabaré Aguerre, the Uruguayan minister responsible for fisheries and agriculture travelled with president Vazquez to Beijing for October’s negotiations.

But Uruguay aspires to become the financial and logistical entry point for China in Latin America, lower house president José Carlos Mahía, said at a recent high-level meeting with Chinese counterparts. The country of around 3.5 million inhabitants can provide a stable political environment for investments and a transport hub for trade in natural resources, he said.

At the inaugural summit of China’s major Belt and Road Initiative in Beijing earlier this month, Aguerre said:

“If centuries ago the Silk Road was an overland trade route, the current Belt and Road initiative is a global informational proposal that breaks down barriers between countries and regions and offers a solution to many global problems.”

Diálogo Chino attempted to contact Shangdong BaoMa for this article but could not reach the company for comment.