Considering the potential catastrophic impacts of climate change, it is well understood that we cannot continue releasing CO2 into the atmosphere in such vast quantities. But the problem is we’re still dependent on fossil fuels globally and are likely to be so for decades to come. So if we’re going to continue producing enormous quantities of CO2 but also agree that the CO2 shouldn’t go into the atmosphere, then what are we going to do with it all?

This question would be much easier to answer if CO2 was thought of not as a waste product but as a valuable commodity. But is there a business case to be made for using CO2?

In a perfect world, we would simply capture CO2 emissions and store them underground, an approach known as Carbon Capture and Storage (CCS). But this isn’t a perfect world, which means that large scale emitters of CO2 such as coal-fired power stations, require incentivising before they will change existing processes to prevent CO2 entering the atmosphere.

So far at least, the risk of mass climate-induced immigration, the significant loss in biodiversity, sea level rise, crop failures and an increased occurrence of extreme weather events has not provided a good enough motivation for many global companies to change their operations within the current market structure.

Another issue is that industries producing large amounts of CO2, such as cement production, oil refining, and coal-fired power, will find it difficult to lower emissions without relying on capturing a proportion of the CO2 before it enters the atmosphere.

Different countries also face unique challenges. For China, it is capturing the CO2 emissions from its coal sector, which may rise to 1,100 gigawatts by 2020 (although coal use may peak earlier). Unabated, these emissions will make reducing the country’s greenhouse gas emissions to its internationally agreed levels near impossible.

For the UK, which now has few coal-fired power stations left, the deployment of carbon capture technologies to all industrial sectors is limited primarily by the lack of CO2 pipeline infrastructure and the political and economic case for undertaking such a significant project.

Control of CO2 emissions in China depends on political and economic support from the government, too, and also finding suitable storage sites within a reasonable distance of where CO2 are being produced. For example, the IEA estimate that approximately 310 gigawatts of China’s existing coal power capacity meet the right criteria for a CCS retrofit, which is a third of current coal capacity.

China has been ramping up its CCS capacity but many of its larger projects are yet to begin operation. These include PetroChina’s Jilin Oil Field EOR Project (Phase 2), Sinopec’s Qilu Petrochemical CCS Project and Shengli Power Plant CCS Project, and the Yanchang Integrated Carbon Capture and Storage Demonstration Project.

The financial incentive for these projects to capture CO2 is to help extract more fossil fuels through Enhanced Oil Recovery (EOR) or Enhanced Gas Recovery (EGR). This approach to capturing CO2 is obviously not a solution to climate change though because the additional fossil fuels recovered by the process are burned.

There are, however, potentially better ways of using the carbon. Through Carbon Capture and Utilisation (CCU), CO2 could be used to create useful products rather than for the recovery of oil and gas – hopefully without releasing more CO2 in the process.

Currently the main CCU options include using CO2 in carbonated drinks, mineralisation, enhanced weathering of silicate rocks into carbonates for aggregate material, methanol, urea, dimethyl ether for secondary chemicals, fertilisers and liquid fuels, polycarbonate and polyurethanes polymer production, dry ice, and fire extinguishers. Many of these CCU options only “lock up” the CO2 for a short period of time and therefore cannot be considered climate change mitigating technologies.

Urea production makes up half the current market for CCU, utilising approximately 132 megatonnes of CO2 per year. However, it has one of the lowest CO2 utilisation growth rates of all CCU technologies (5% per year) because the process is well established, meaning that new plants are mostly replacing ones that are being retired.

Since 2013, algae for biodiesel production has seen a phenomenal year-on-year CO2 utilisation growth rate of more than 6,000% and carbonates and polycarbonates have also seen sharp increase in CO2 utilisation of 3,000%. But despite the high growth rates, in total these three technologies only represent about 1% of the CCU market. CCU technologies would be best applied and provide the most benefit in processes where captured CO2 replaced an existing fossil derived source.

To limit the global temperature rise to no more than 2C above pre-industrial levels we will need to reduce global CO2 emissions by 42 gigatonnes CO2 per year (cumulatively 800 gigatonnes CO2 between now and 2050).

As figure 1 shows, the potential for long term CO2 sequestration from all CCU options accounts for no more than 0.5% of the required reduction in CO2 emissions (cumulatively only 3.86 gigatonnes CO2 between now and 2050). 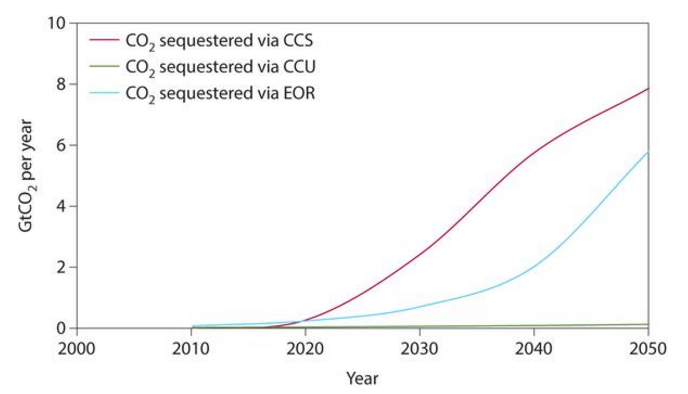 CO2-Enhanced Oil Recovery (EOR) has the potential to materially contribute to the sequestration of CO2 whereas the contribution of CCU is negligible.
Source: Nature Climate Change

In general, CCU technologies should not be considered as a method to reduce CO2 emissions as this will only defer investment and deployment of CCS and technologies that can make a genuine difference to our emissions targets.

This is based on the fact that CCU, in general, does not provide a long term storage of CO2 and the potential market size of CCU technologies is limited, despite recent growth.

Given that CCU has limited potential to make an impact on our global emissions targets, governments must focus their attention on CCS and other climate mitigation technologies. China is the world’s largest emitter of CO2 and has great potential to be the world leader in CCS. In doing so it would encourage other countries like the UK and US to follow suit and do more.

Given that our main global climate targets are set for 2050 and it takes 10 years to design and build a new CCS plant, to make a sizeable impact in our emissions we needed CCS yesterday.

The transition to a world devoid of CO2 emissions will require all industrial sectors to make significant changes to their processes and operations. Regulatory policy will be required in all countries, building on the Paris Agreement that action on CO2 is required.

Governments must also provide economic support to kick start these CCS projects as they require significant initial investments in pipelines and transportation facilities, and furthermore reassurance to the operators of CCS plants that they will not become economically uncompetitive in the global market.

A well-recognised incentive for CCS and CCU is a carbon price in which CO2 emissions are taxed to dissuade particular operations and favour others. China (working with Germany) has also taken the step of introducing several trial emission trading schemes (ETS) in five of its largest cities and two provinces, which is informing the deployment of a nationwide Chinese ETS later in 2017.

Conversely, for all its good intentions the European ETS has failed to provide an adequate motivation for industrial decarbonisation due to the way the scheme functions and has resulted in some industries increasing their output of CO2 emissions. A global CO2 pricing agreement or entirely alternative system is required to reduce CO2 emissions in an economically sustainable way which doesn’t disadvantage entire national economies.

If governments want a fix for reducing CO2 emissions CCS is a great option but it does require a large capital investment. Supplementary policies must reduce the risk of a country’s industrial assets becoming uneconomical in a global market rather than raising them.

CCU should only be applied if it is directly replacing an existing source of CO2 from fossil fuels (such as urea production) and if it doesn’t lead to more CO2 being emitted than without the carbon capture.

Business cases for CO2 utilisation will probably only be successful for enhanced oil and gas recovery based on current global political and economic policies, but it is paramount that industries consider the full life cycle of their CO2 utilisation process to avoid doing more harm for the sake of gaining “green credentials”.

CO2 turned into stone in Iceland in climate change breakthrough

Capturing and using CO2 is 'false hope' for climate change

How China can kick-start carbon capture and storage