Diplomatic relations between China and Argentina took a marked turn for the worse in March after two Chinese fishing vessels were shot at by Argentine coastguards in separate incidents.

While both boats managed to escape the South American country’s exclusive economic zone (EEZ), one Chinese vessel was captured, its crew evacuated and then sank by the Argentine navy. It was an exceptional event, garnering worldwide media attention.

One fishing vessel which initially escaped, the Hua Li 8, was later captured far away from the South Atlantic.

The confrontation with the Argentine navy did not escape the attention of the Chinese government, whose embassy in Buenos Aires called for an official investigation into the sinking of the Lu Yan Yuan Yu 010.

These events may seem unusual, but they are all too familiar for those who follow regional and global fishing contexts closely in this region. Nonetheless, the incidents serve as a reminder of the importance of better international coordination in efforts to protect vulnerable marine ecosystems.

The South Atlantic is one of the regions with the most marine biodiversity on the planet. The meeting of the warm current from Brazil, and the cold one from the seas around Falklands/Malvinas islands, helps create the conditions for abundant marine life, as does a vast plain of a seabed which plunges steeply at the edge of the continental shelf.

Because of the 1982 conflict between Argentina and the UK over the Falklands/Malvinas, attempts by both countries to regulate fishing in the region and expel illegal, unregulated or unregistered (IUU) boats, have largely failed. This has meant the UK opted to open its controlled area to almost any boat that pays an annual levy, without rigorous requirements on security, working conditions or environmental protection.

For Argentina’s part, it is almost impossible to control 100% of the thousands of kilometres of maritime border and prevent the illegal entry of boats into its EEZ. In the main, its attempts to tackle illegal fishing there, or in adjoining international waters, have been weak or non-existent.

A lack of oversight, regional agreements or a multilateral organisation to regulate and limit exploitation of the South Atlantic has tempted vessels to take advantage. 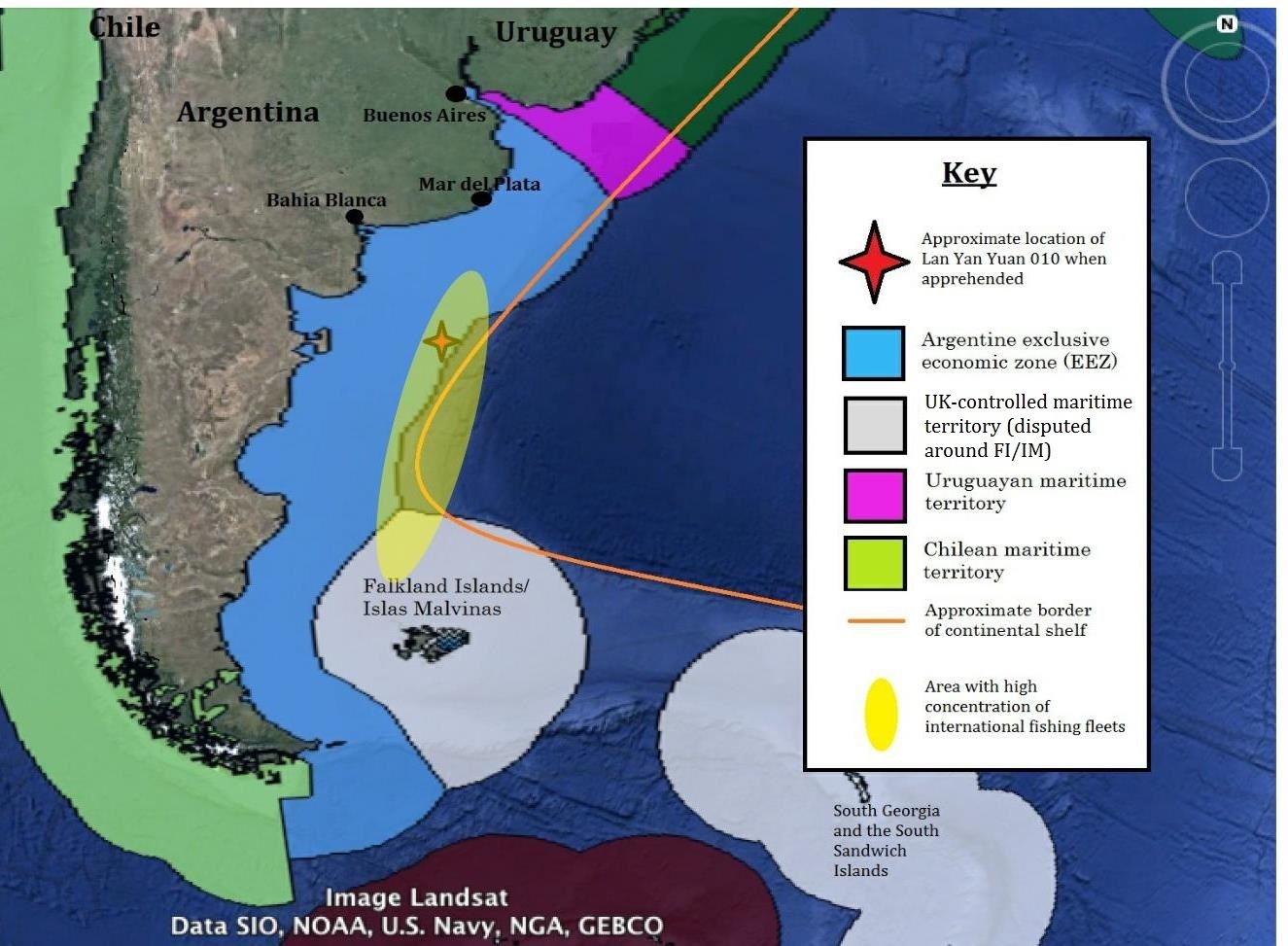 According to the latest data from the UN’s Food and Agriculture Organization (FAO), 90% of the world’s fishing grounds are over-exploited, at the limit of what can be fished sustainably, or have collapsed.

Stocks in the South Atlantic’s fishing grounds plummeted by end of the 1990s, following the massive and uncontrolled entry of Spanish vessels into its waters, authorised by Argentina’s then government.

In the last few decades, China’s fishing fleets have sought new fishing grounds, due to increasing shortages in its own waters, a growing appetite at home for fish, and the reluctance of Asian neighbours to enter into fishing agreements.

Among the 500 or so foreign boats that operate in the South Atlantic, the most visible flag carried is that of Chinese mainland and Taiwan, which accounts for 65% of the total.  South Korea follows with 17% and Spain with 13% (some of these fleets fishing under the Falklands flag).

One reason these floating cities are able to continue fishing in these waters for years on end is that they receive logistical support from Port Montevideo and Port Argentina in the Falklands/Malvinas.

Without this support, slack environmental oversight and even alleged slave labour, it would otherwise be too expensive for many of these fleets to remain in the region.

A Chinese port in Uruguay

Uruguay, which unlike Argentina hasn’t been a major destination for Chinese economic investment, is an increasingly a port of call for Chinese fishing fleets.

The vast wealth of fishing boats and reefer ships (which provide replenishment and cold storage) in the port of Montevideo has promopted Chinese company ShanDong BaoMa Grupo de Pesquería to propose a US$200 million (1.3 billion yuan) port investment in Uruguay, including workshops and refrigerated storehouses.

By sealing the deal to build the port, BoaMa group would virtually guarantee China a piece of sovereign territory in the South Atlantic. Such was the case with a Finnish paper mill, installed on the eastern banks of the Río Uruguay and which includes a free economic zone, allowing it to dispatch boats without the interference of the Uruguayan state.

China would literally have some sovereignty over the Río de la Plata, an attractive logistical and commercial advantage for migratory fishing floats.

Squid is one of the principal sources of food for hake, Argentina’s other main commercial fish. Squid also feeds species of dolphins, whales and birds, such as penguins.

During its migratory cycle, squid enters the EEZ’s of Brazil, Uruguay and Argentina, the zone that encircles Falklands/ Malvinas, and international waters.

Despite the absence of scientific studies on the impacts of over-fishing on the ecosystem, there have been sharp declines in the penguin and sea lion populations, with numbers for the former falling by 80%.

Little is known the stocks of many other species and very little about the extent of accidental catches. There are no rules about the size or age of species caught, which has a huge impact on its ability to replenish its population.

In addition, the South Atlantic’s marine environment is also damaged by the discharge of fuel, rubbish and other toxic substances, but there are few punishments for transgressors.

In order to avoid a collapse of the marine ecosystem in the South Atlantic, there needs to be less fishing and effective controls over all boats operating in the region.

All boats should comply with labour regulations, as required by the International Maritime Organization, and have onboard observers appointed multilaterally by regional neighbours. Such measures are necessary as an initial precaution. Disposing of waste on the high seas must be prohibited and enforced.

Port authorities should be more transparent and information on catches and other incidents should be publicly available. At the same time, no boats with a record of illegal activities should be allowed to fish in the region, either in EEZs or surrounding international waters. The satellite system of identification for every boat should be obligatory and permanent.

Complying with these requirements would reduce the size of the fishing fleet by 20%.

States and companies who want to fish in the region should respect sustainability, the health of the ecosystem, the dignity of workers, local economies and security of navigation.

Failing to change course will lead to more incidents, perhaps with even more serious consequences than those which occurred in March.