The use of bear bile in traditional Chinese medicine is overwhelmingly unpopular in public opinion. But the big question is how this pressure can persuade Chinese pharmaceutical companies to end a practice that is blamed for cruelty to tens of thousands of bears, many of them dying prematurely.

A recent survey has found that 98% of Chinese people regard the extraction of bile, a valuable ingredient in traditional Chinese medicine, from live bears as cruel. Almost 84% have called for the method to be banned outright.

The tradition has become increasingly taboo in recent years as animal rights has become a mainstream issue for Chinese citizens, particularly for younger generations.

The debate came to a head in 2012 after Guizhentang Pharmaceutical, which extracts, processes and sells bear bile, failed to complete fund-raising through an Initial Public Offering (IPO).

Since then, the issue has become an increasingly fraught, with wildlife groups pitched against those that promote bear bile’s commercial use.

Towards the end of 2015, the Guizhentang again applied for a market listing despite one of the company’s founders, Qiu Shuhua, telling state media CCTV, “if we’d known this (scale of opposition) would happen we wouldn’t have tried to IPO (in 2012).”

A recent online survey by Dataway, a Chinese intelligence group, revealed that residents in ten cities saw three reasons for shutting down the industry: cruelty to bears, the existence of synthetic alternatives, and the risk of infection being passed from the bears to humans.

Ta Foundation secretary Zhang Xiaohai estimated that it would cost 12 billion yuan (US$1.85 billion) to close down the industry – this would cover the purchase of 30,000 bears from China’s registered 67 bear farms, compensation payments to the farms, their workers, and the pharmaceutical factories.

Zhang told chinadialogue that 99% of bears subject to tubeless bile extraction suffer from painful gallbladder infections, and that many rescued bears go on to die of liver cancer. As well as causing excruciating pain to the bears, the presence of illness and infection poses serious health risks to the human consumers of bear products.

Bear bile has been used in Chinese medicine since the Tang dynasty, mainly in the treatment of gallstones, fever, burns and liver and heart disease.

In light of the most recent IPO bid, animal protection agencies have called for individual companies to change their methods. chinadialogue was not able to reach Guizhentang for comment. 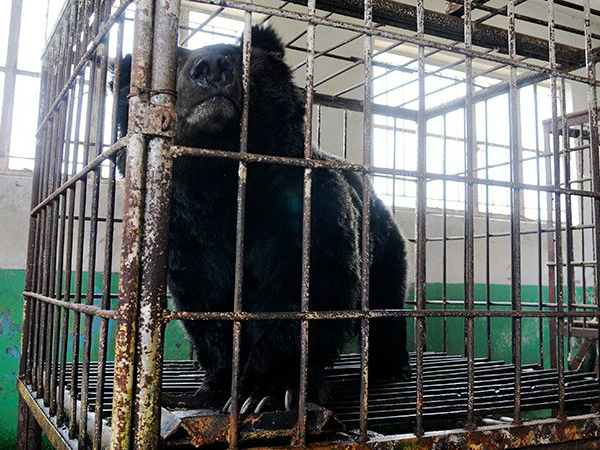 Opposition at the forum

At the forum, Dataway released the findings of its survey. Over 70% of respondents had never purchased bear bile products before, and of that group 90% said they would never use or buy them in the future.

“The market is contracting, and the outlook is negative,” concluded the report.

Guo Ziyi, head of the cultural centre at the National Development and Reform Commission’s Investment Association, was blunt in saying she would not invest in Guizhentang. The company has attempted to list twice, in 2012 and 2015, and faced opposition on both occasions, indicating wider problems within the industry.

“We only invest in emerging industries, not those on the way out,” said Guo.

Pu Zhengji, a researcher with the Changbaishan Academy of Sciences’ Institute of Zoology, told chinadialogue that he did not agree with Zhang Xiaohai’s view that the cost of an industry shutdown would be 12 billion yuan.

He added that the captive rearing of bears – which runs parallel to the illegal bear bile trade provides income for many bear farmers – does nothing to protect the animals in the wild.

Pu explained that wild bear populations in Changbaishan, an area close to the border with North Korea, have been shrinking in numbers because of the building of bear farms nearby, which capture wild bears for breeding purposes.

Over the past two decades, tourist numbers in the scenic area have increased from the thousands to over one million per year, translating into high demand for bear bile products.

According to those who use it, wild bears are thought to produce the type of bear bile that is most effective.

Xie Yan, a deputy researcher at the Chinese Academy of Sciences’ Institute of Zoology, said that animals bred in captivity, including bears and Siberian tigers, cannot be released back into the wild, and therefore do not help the conservation of wild populations, as some captive breeders argue.

Xie added that captive breeding is only appropriate when numbers in the wild are so low that there is a threat of extinction, which does not apply in this instance.
“We cannot use animals at will simply because we learn how to breed them. It’s unimaginable that pandas or Siberian tigers would ever become a regular part of our diet,” he said.

Barriers to a ban

According to Guo Ziyi, the high profit yield has made many bear farmers reluctant to abandon their trade. Adapting their methods would result in financial loss as existing buildings, bears and staff became redundant.

Bear bile extraction is profitable because bear bile is a valued ingredient in Chinese medicine. The difficulty of catching bears means the ingredient was not widely used. In the early 1980s, techniques used in North Korea for extracting bile from live bears were adopted in China, where the practice quickly grew and became commercialised.

Due to its pharmaceutical properties, the identification of a suitable replacement is crucial if the process is to be banned.

In response to the 2012 controversy, Health Minister Chen Lan said that when human health and animal protection come into conflict, the standard of reasonable behaviour should be to minimise harm and maximise benefit.

He said: “if other materials, other methods, can be used to produce the same pharmaceutical effect, there’s no need to mistreat animals.”

However, Wang Guoqiang head of the State Administration of Traditional Chinese Medicine, claims that finding an effective alternative will be difficult given the substance’s complex make-up.

One traditional Chinese doctor told chinadialogue that modern scientific methods can synthesise the main component of bear bile – but there is still a large difference in efficacy between the natural and artificial versions.

A senior wildlife official said privately that the campaign to ban bile extraction from live bears may be part of a conspiracy to help Western medicine grow while holding back traditional Chinese techniques.

According to Zhao Zhonghua, chief China representative for World Animal Protection, China is the origin and the biggest producer and consumer of traditional Chinese medicines – yet the Chinese medicine market is worth more in both Japan and Singapore. Neither of those countries use bear bile. Bear bile heart pills, which are very popular in Japan, are now made with a synthesised alternative, so they can be sold around the world.

The use of this cruel practice, imported from North Korea, damages the reputation of Chinese medicine and holds back its development.