Joshua Becker doesn’t have multiple TVs in his house any more, but he does have more time to spend with his family and less stress.

Becker, a 39-year-old writer and speaker from Peoria, Arizona, has shed a life of consumerism in search of a life of "intentional living". He only buys what he needs to live, not what he or society expects him to buy.

Together with his wife and two kids Becker calls himself a minimalist, someone who intentionally promotes the things he or she values and removes anything that distracts from it.

The movement is sweeping across the United States and other developed countries in the world as more and more individuals and families conclude that simply buying and owning more possessions doesn’t bring more happiness or contentment in life. In fact, they argue, more possessions means more stress.

“Not only were they not making us happy, they were distracting us from the very things that did make us happy,” Becker says.

Minimalism, or simple living, comes in different forms for different people. Some are shedding books, papers, unused toys or TVs. Others take it a step further and once they have shed their possessions, they shed their large, oversized homes in exchange for smaller homes. Still other people searching for a simple life focus on eliminating the barrage of information that comes at us every second of the day by setting specific times for email and the Internet. 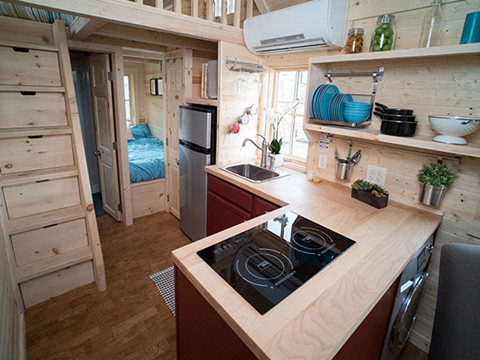 Becker, who runs a blog giving tips and ideas about minimalism, embraced the movement out of frustration. Several years ago, he was cleaning out his garage with his young son when he commented to his neighbour that the more stuff someone owns, the more the stuff owns them.

“That’s why my daughter is a minimalist,” the neighbour told Becker. “She keeps telling me that I don’t need all this stuff.”

That was the turning point for Becker and his family. After that, the family started going room-by-room in the house finding items they didn’t use or didn’t need and donating them to Goodwill. At first, Becker says, donating the vanloads of possessions felt good, like they were giving back to those in need. But that soon changed.

“By the third of fourth vanload to Goodwill, we started asking ourselves some pretty difficult questions. Like, why did we buy things that we didn’t really need?” he says. “That’s a pretty simple question, but it’s pretty profound.”

They realised  they were buying things for bad reasons, simply because others did, because advertisers told them they should or to impress others, Becker says.

It’s a sentiment that is common in American society.

Thomas Griffin, a 33-year old Los Angeles resident, explaining how he decided to change his life after a mechanic nearly convinced him to spend money he didn’t have to buy a Lexus to impress a woman he was attracted to: “It was painful,” he says, “but I ultimately decided to purchase a Corolla and give up on impressing that woman. At the time it felt like I was giving up on life, though now I realise that I don’t want to spend time with someone who evaluates me by the luxuries I can provide them with and who I use in return by buying their attention and affection.”

Since then, Griffin has cut down on eating out, moved into an apartment and is working on getting rid of clutter including old papers, mail and books.

“For me, it’s also part of a larger shift, from living from my head to living from my heart,” he says. “My head can always create a justification for why I should keep things, but it makes me feel sad when I do. The question isn’t whether there’s anything good about keeping a particular item, but rather whether the benefits outweigh the costs.”

Griffin is also using minimalism to focus on reducing his activities and commitments. He’s focusing on stillness and keeping a more relaxed schedule that doesn’t keep him feeling overstressed. That, in turn, has allowed for some environmental benefits, he says, including driving less, buying fresher food that uses less packaging and chemicals, and buying electronic books, which not only saves space but also saves trees.

With fewer possessions cluttering their life, some adherents to simple living decide to downsize from their oversized McMansions to what are known as tiny homes.

Tiny homes can be as small as less than 10 square metres, which can drastically cut down on electricity costs and maintenance work. Companies have started popping up throughout the US for people to purchase a ready-made home or design their own from scratch.

Minimalism is being felt across the world, but that’s mostly because embracing simple living has allowed its adherents to travel more freely, which is helping to bring the ideas to other parts of the world. The movement is most prevalent in the US and the United Kingdom, though.

Research adds some credence to the idea of living more simply. A study published in the Journal of Positive Psychology earlier this year shows that people buy material possessions under the misguided conclusion that it will make them happier. It doesn’t, says study co-author Ryan Howell, an associated professor of Psychology at San Francisco State University.

Another study published in the American Economic Review shows that people are willing to put money ahead of happiness. In the study, researchers found that when choosing between a job with more hours and a higher salary or one that would earn less pay but more hours for other things in life, many of the respondents chose the job with the higher pay knowing it wouldn’t make them as happy.

But less exposure to advertising may be one key to helping people want to buy fewer items, says Ellen Tveit, a 42-year-old minimalist who lives in St. Paul, Minnesota, with her husband and son.

“We haven’t owned a TV in six years,” Tveit says. “We don’t shop recreationally. Our family is exposed to a lot less advertising than others, and I’m sure thmakes it easier for us to buy less.”

The family downsized their living arrangements from a 100-year-old home to renting a condo after spending four months living outside of the US and realising they could live better with less stuff. “I’ve seen that there’s a point at which stuff no longer improves our lives, and just beyond that point our stuff starts to own us.”

Farming the city: a book review