The large reserves of oil, gas and coal held by energy companies has led to talk of a “carbon bubble”. These are assets that cannot be produced and burnt given the carbon dioxide emission limit of 886 billion tons (Gt) necessary to hold global temperature rise to a consensus limit of two degrees celsius by 2050. As with the real estate and dot com bubbles, there is a risk of financial crisis and global recession if these assets are rapidly devalued. Despite this, companies continue to invest significant capital on further expanding an already superfluous reserve base – US $675 billion per year from listed companies alone.

A recent report on the carbon bubble argues that companies would do better to divert capital spending into low-carbon alternatives (renewable energy, alternative fuels, smart grid, energy efficiency, etc.). It concludes with a series of recommendations for regulators, investors, rating agencies and policy-makers to encourage a repricing of reserve assets and a redirection of capital in order to avert a potential global economic crisis.

Carbon price is the main issue

But fossil reserves are not the real problem. Of greater importance is the lack of a meaningful global price for carbon. Until this is established financial markets will continue to overvalue energy companies, and the long-term threat of a carbon bubble and stranded assets will not be a determining factor in investment reallocation.

To understand what will bring about a meaningful carbon price, some more fundamental questions need to be answered. What will be the profile of fossil fuels in a low-carbon energy future? How will the pattern of usage be changed in a world where the environmental cost of carbon is factored into the price?  And how can this be done in a sustainable, equitable manner that provides energy to three billion people who are without electricity today, plus the two billion more who will inhabit the earth by 2050? 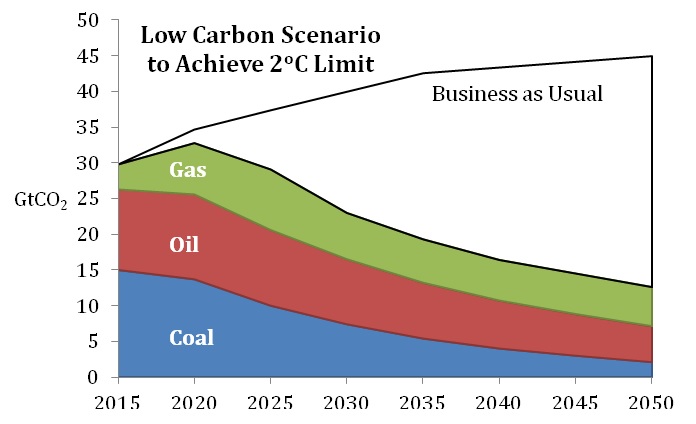 Energy efficiency improvements for power plants, factories, buildings, and vehicles will play the most important role in such a scenario.  A reduction in energy intensity of 1.5% per year on average will yield significant results – particularly in the electricity sector where coal currently dominates generation.

Beyond this, renewables and even nuclear power (in those countries where it is politically acceptable) can deliver required reductions in carbon dioxide emissions as these technologies continue to mature and unit costs continue to fall. The share of renewables is assumed to rise to about 50% in 2050, as compared to 30% in most base case scenarios.

Each of the fossil fuel sectors (oil, coal and natural gas) exhibits a different dynamic in the market, and thus will play out differently in the planet’s carbon future.

Financial markets are relatively shortsighted, and oil company share value is highly dependent upon quarterly and annual performance. Any company that unilaterally began to deplete its reserve base to divert substantial capital expenditures into alternative R&D would suffer an immediate blow to its share price that would far outweigh the longer-term threat of stranded assets associated with the carbon bubble.

Even under the low carbon scenario proposed here, oil demand will continue to grow over the next decade and then decline steadily to just under half its current annual rate by 2050. Such a scenario does not portend a bursting of the carbon bubble, rather a gradual shift in the industry’s planning and reserve development in response to a shift in global carbon policy. Reserves are valued on companies’ balance sheets based upon “currently economical” recovery assumptions, hence the book value of reserves will necessarily change as the price of carbon is increasingly factored into production costs. These costs will place upward pressure on oil prices, making alternative energy sources increasingly competitive and profitable. Only then will oil companies begin to redeploy capital into alternatives.

Recent history illustrates this process. Oil prices were fairly stable at US $25 to US $30 per barrel until about 2001 when they rose rapidly, reaching a peak of over US $130 per barrel by the beginning of the recession in 2008. During this period, major oil companies began to make meaningful investments in a number of alternative fuel sources ranging from biofuels to solar. However, as demand fell and prices declined to the US $80 per barrel level, these same companies began to divest from alternative energy. BP has moved away from its “Beyond Petroleum” public relations profile and is quietly divesting its alternative energy assets, including its sizeable US wind power assets, valued at more than $3 billion; Chevron is backing out of its biofuel investments; and ConocoPhillips divested all of its alternative energy activity in 2012 to refocus on its “core business.”

Coal consumption in a low carbon future will decline radically from today’s 8 billion tons per year (tpy) to just 1 billion tpy by 2050; the cumulative consumption of coal over the period will decline to 60% below present levels. Proven global reserves of 861 billion tons represent approximately 130 years’ supply at current production levels, so exploration and reserve acquisition are a non-issue for coal, and do not affect market valuation or impact share price nearly as much as productivity and transportation costs.

In fact, the carbon bubble for coal is already deflating rapidly. Over the past two years the share price of the four largest US coal companies has declined by 75%, and the value of China’s only publicly traded coal company has fallen more than 80%.  Even the world’s biggest coal company, Coal India, which provides 90% of that country’s supply, has begun to turn to solar while suffering a decline of 25% in its share value. Contrary to the predictions of the recent carbon bubble study, significant share devaluation is already underway, without any major impact on financial markets.

Natural gas will play a central role in the transition to a low carbon future.  Global proven gas reserves grew by nearly 6% last year and some in the industry have declared an “end to the era of exploration.” Despite this, there is no carbon bubble for natural gas, as annual gas consumption is predicted to grow by 50% between now and 2025 as it displaces coal and offsets some oil demand. Over the next decade, as demand rises and fracking regulations are tightened, there will be upward pressure on gas prices. Since such a large portion of natural gas production is embedded in integrated oil and gas companies, rising carbon costs will drive investment toward alternatives.

The path to a low-carbon future

In recent months there have been a number of developments in carbon policy and carbon markets relevant to the establishment of a global carbon price.

Among the most troubling of these events was the turmoil in the EU carbon trading market, during which the price of carbon allowances fell 40% to a record low of €2.81 per ton in January 2013, far below its high of €32 in 2006. After heated debate the European Commission voted in July 2013 to shore up the market by reducing the number of carbon permits being issued and agreeing to address some of the systemic problems with the program. These include an over-supply of credits because of lower demand in the recession, the fact that it allows manufacturing emissions to be “exported” to non participating countries such as China and India, and the counterintuitive fact that more renewables and cheaper natural gas create an abundance of credits that make it easier to buy credits and burn coal.

Outside Europe, there are more encouraging developments. China has introduced a number of regional carbon trading schemes as well as a national carbon tax to help slow emission growth. In the US, regional carbon trading programmes have been implemented in California and nine states in the Northeast and Mid-Atlantic region including New York and Massachusetts, that altogether account for about 30% of US GDP. President Obama’s newly announced executive branch initiatives promise to have a meaningful impact on carbon dioxide emissions – especially by further reducing coal consumption. There is even growing support in the business community in the US for a carbon tax that would help establish a de facto price for carbon.

The existence of a carbon bubble is cause for concern but not alarm – it will not “plunge the world into a financial crisis” as a recent piece in the Guardian warned. Instead it will work its way through the system as carbon policy progresses. Energy companies will not be frightened by the spectre of stranded assets into diverting investment into alternative fuels. Only when the environmental cost of carbon dioxide is incorporated into the price of fossil fuels – whether through cap-and-trade or carbon tax – will it be possible to build a sustainable energy future.

Nuclear, not fracking, is the answer to China’s future energy needs