Work on Malaysia’s new East Coast Rail Line (ECRL) started again in April 2019 after a delay of almost a year for renegotiations with the Chinese firm leading the project. The railway’s new route, adjusted to save costs, now avoids two areas of ecological importance, making the delay good news for Malaysia’s environment.

Over 640 km long, the railway connects Kota Bharu on the east coast of peninsula Malaysia with the country’s biggest commercial port, Port Klang, on the west coast near the capital Kuala Lumpur. It will link up to a wider pan-Asian network of railways currently under construction or planned as part of China’s global Belt and Road Initiative. 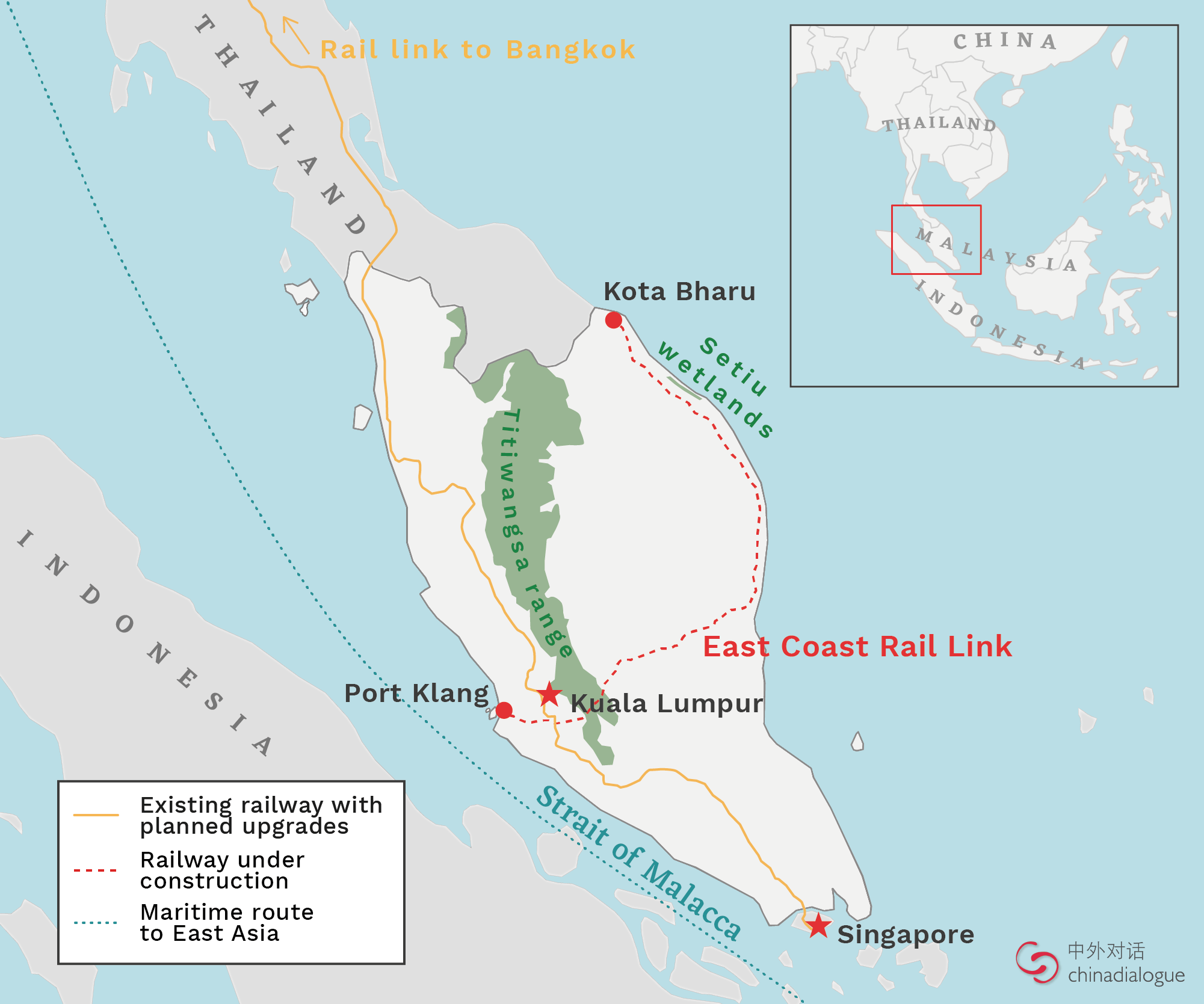 Work on the project started in August 2017 but was suspended in 2018 following a general election in Malaysia. The newly-elected prime minister, Mahathir bin Mohamad, accused his predecessor of awarding the project to the China Communications Construction Company (CCCC) without an open tendering process, at high costs and unfair terms for Malaysia.

The subsequent renegotiation was successful in improving the terms and lowering the cost. “We are pleased to announce that the construction cost for phases one and two of the ECRL has now been reduced to RM44 billion (US$10.8 billion), a reduction of RM21.5 billion ($5.3 billion) from its original cost of RM65.5 billion,” announced Mahathir when the project was resumed.

Upon completion, now set for 2026, two years later than originally planned, the railway will be operated as a 50/50 joint venture between the Malaysian Rail Link (MRL) and CCCC, with 80% of the profits going to MRL.

The line will halve the time needed to travel from Kota Bharu to Port Klang, a journey that takes about eight hours by road on the East Coast Expressway. It will pass through several small towns where it’s expected to bring economic development by facilitating the transportation of locally produced materials such as palm oil, rubber and timber. The project also has the stated aim of employing 70% of its workforce locally, both during and after construction.

A key result of the renegotiation process was the redrawing of the railway’s route to reduce expensive tunnels and elevated sections. It has been shifted a few kilometres inland along the eastern side of the peninsula, and the western section leading to Port Klang has been rerouted southwards. “[A] comprehensive value engineering exercise has been done… which resulted in an optimised design and a new alignment,” explained an ECLR representative.

This realignment reduces the environmental impact of the project by avoiding two areas of environmental concern. The first is a section of the Titiwangsa range known as the Gombak Selangor Quartz Ridge, which has been nominated as a UNESCO World Heritage site for its rare geology. This mountainous region is also important as a water catchment area and for its rich biodiversity. The second is the east coast’s Setiu wetlands, the main breeding ground for the critically endangered painted terrapin.

The new route still passes through secondary forests that are part of the country’s Central Forest Spine. But as it mainly follows the East Coast Expressway, the impact of construction on the environment will be limited. “The main environmental challenge is to reduce the loss of forests and the impact on wildlife. Therefore, the entire ECRL project is expected to see the construction of 30-40 tunnels so that important forest habitats [are] not affected,” said a representative of CCCC.

The new route is being presented for public inspection as part of a roadshow that has visited several towns along the planned railway. In general, local people seem to welcome the project. Environmentalists too seem to have few criticisms.

Based on information provided at an MRL briefing in November last year, WWF Malaysia’s conservation director, Dr Henri Chan, said: “The extent of permanent forest reserve which the ECRL will traverse will be minimal and tunnels will be constructed where the alignment will pass through forest reserves in order to minimise forest fragmentation.” He declined to comment further until reviewing environmental impact assessments for the various new sections of the route, some of which have yet to be released.

The Kuantan tunnel on the eastern side of peninsula Malaysia in Pahang state. According to a supervisor at the site, the tunnel will be 3km long and take three to four years to complete. Work started in August 2019 and less than 10% has so far been completed.

Local people in Kuantan examine a map showing the new route of the ECRL. Since the project resumed, local people are being given the chance to find out more about its progress and leave their feedback. In general, public opinion has been supportive. “We hope the project will succeed. We hope it will bring economic development for people in the area,” said Abu Bakar, 55, pictured here with his children.

ECRL recruiters interview Aqiff Fiqrin Bin Ramlee, 26, in a mall in Kuantan, part of the project’s campaign to employ 70% of its workforce locally. A graduate of the Malaysian Aviation Training Academy with a diploma in aircraft maintenance, he applied for a job as a machine operator. “The interview went OK. The interviewers were so friendly. I hope I have a chance, inshallah, but many people are applying too. It’s good that the ECRL is [creating] many jobs for Malaysian people,” he said after his interview.

Maran in Pahang state is one of several small towns through which the ECRL will pass. Muhammad Shahaimi, a former town councillor, believes the railway will bring many benefits: “Because we will have a station nearby, 10 km from here, there will be a terminal that will benefit people around, and it will also be for cargo. We are expecting people to come both from the east coast and west coast. We are an agricultural area. We have palm oil, rubber, timber. All the cargo will pass through here.”

Freight is currently transported between the east and the west coasts of peninsula Malaysia via the East Coast Expressway. The ECRL will follow the route of this highway, and is expected to take over the bulk of freight transportation at a lower cost. The new railway will also provide a shortcut for goods currently transported by sea via the Strait of Malacca.

Not everyone is optimistic about the ECRL. Ng, 52, who owns a restaurant in Gambang, another small town along the route, doesn’t hope for much. “I don’t think the town will grow. After we got the highway, the economy went down. All the vehicles went along the highway, no one passed through our town. I think it will be the same with this. I feel more people will migrate out rather than come in,” he said.

The 871-metre-long Dungun tunnel will limit deforestation in the Bukit Bauk reserve on the east coast in Terengganu state. Bukit Bauk is part of Malaysia’s Central Forest Spine, a network of secondary forests that link the country’s main national parks and allow for the free movement of wildlife. The ECRL aims to protect against habitat fragmentation with a series of tunnels and viaducts; when complete, it will have 38.7km of elevated track and 13.5km of tunnels.

The Bukit Bauk reserve allows for the free movement of wildlife, including tigers, between Malaysia’s largest national park, Taman Negara, and the coastal ecosystems of Terengganu.

This area near Dungun in Terengganu has been deforested for the construction of a viaduct to carry the railway. These elevated portions of track aim to avoid rivers and streams, protecting the watershed.

A local girl looks for crabs in the flooded mangrove forests of the Setiu wetlands, a biodiverse coastal area in Terengganu state that is Malaysia’s main breeding ground for the critically-endangered painted terrapin.

The new route of the ECRL now avoids the Setiu wetlands. Construction has been moved several kilometres inland to an area less prone to flooding, in large part to cut costs by reducing the need for elevated sections.