Every Friday evening, a 2km stretch of road in Caidang, Jiangsu province throngs with merchants haggling over puppies and kittens. This market has been going for more than 30 years and, like many others across China, it’s profiting from a booming market in pet ownership.

To meet the demand, China’s pet industry relies on a supply chain of breeders and wholesalers. But there is lax oversight of the market, despite evidence of forged immunisation certificates, inadequate animal welfare and misled pet owners.

Wholesale traders bring cats and dogs to the unofficial market in Caidang from farms all over the country where they can sell 800 or more animals in one evening for 100-200 yuan (US$15-30) each.

According to a survey by animal protection group Pawfect Plan, the animals traded in such markets are sold both to city pet shops and directly to new owners.

Animals bred on pet farms live in poor conditions and are not immunised, which means they carry various parasites and diseases. Cai Chunhong, a social commentator who has long followed animal protection issues, says traders offload “problem animals” quickly to avoid infecting others.

These farms are just breeding factories. The animals aren’t cared for at all. They’re just kept alive.”

Cai says these unhealthy animals are given cheap antisera to perk them up and then groomed to ensure they sell. Once they arrive at their new homes the injections wear off, and the animals usually die within a month.

“The new owners think they’ve failed to look after their new pet properly, but really they’ve been misled by the sellers,” said Cai.

The farming, immunisation and trading of pets isn’t covered by any specific laws, so the markets operate without oversight. In a recent report on China Central Television (CCTV), both the local market regulation bureau and agricultural veterinary station said the pet market falls outside their jurisdiction.

Who is buying all the pets?

Surprisingly, it is the young who are driving most of the growth, with about three quarters of pet cat and dog owners having been born in the 1980s and 90s. 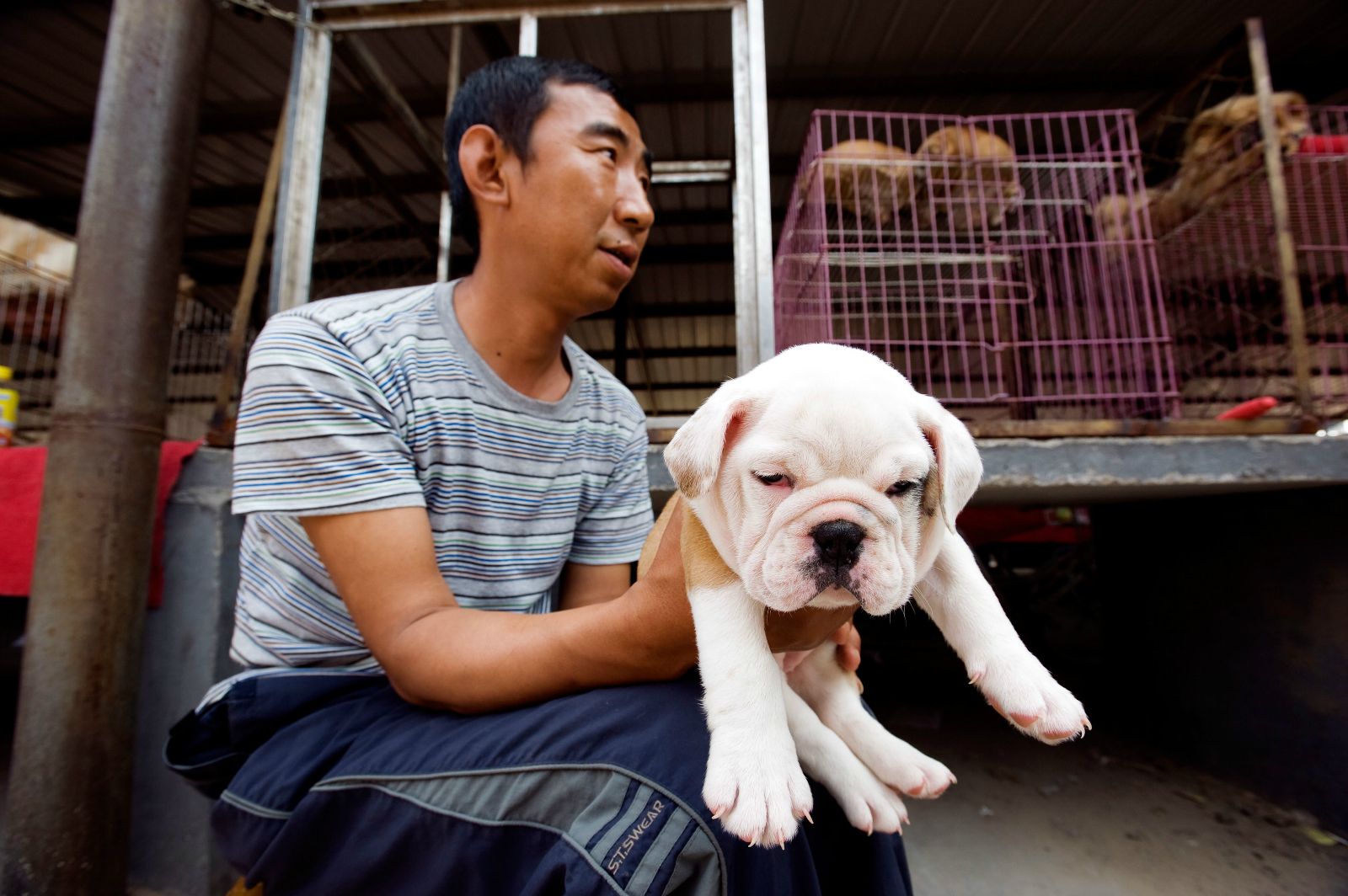 Deng Muxing, 25, opened a pet shop in Xi’an in late 2017. He said 13 pet shops and veterinary practices have opened within a 3km radius. “The people buying pets from me are increasingly young couples, or well-off singles.”

Cai Chunhong said pets in China tend to be bought, rather than adopted, as people prefer pedigrees and don’t know much about options to adopt. The good breeders are expensive and can’t keep up with demand, so black-market traders have stepped in, breeding pets at the lowest possible cost to maximise profits.

From breeding machines to strays

There are numerous pet farms reported in other villages near Caidang. Many are backyard operations that use chicken offal and rice chaff as fodder. It costs no more than 0.20 yuan (US$3 cents) a day to feed a dog like this. Some villages are home to a hundred farms, with most households involved.

“These farms are just breeding factories. The animals aren’t cared for at all. They’re just kept alive,” said Deng Muxing.

According to Cai Chunhong, cats and dogs kept for breeding spend their entire life in cages and females are given injections to keep them in heat. Animals that go unsold can still turn a profit: they are kept in captivity and their blood is harvested for sale to vets.

Cai compares the interest in pet ownership by some people with that of branded luxury handbags: “They’re not keeping pets because they love pets, but because it’s trendy. They don’t keep them long before finding it too much work and abandoning the pets. Many pets end up as strays.”

China has 40 million stray dogs – 20% of the global total – according to data from the World Health Organisation. That’s because urban strays are rarely sterilised. It was estimated that in 2017 there were over 200,000 stray cats in Beijing alone, and even more stray dogs.

“It’s more important to sterilise stray cats and dogs than to feed them. Otherwise they’ll just breed. We also need to educate pet owners so that they don’t abandon their pets,” Du says.

It is hard for buyers in the current market to be sure they are getting a healthy pet, and there is little they can do if health issues appear later.

Some attempts have been made to regulate pet ownership. In 2017, Suzhou started requiring dogs to be microchipped on registration, with the chip holding information on both the dog and its owner, to reduce abandonment.

However, there is still no national standard or management system for pet breeders. The rules on the trading of live animals are restricted to those that carry diseases transmittable to humans. While regulations on animal welfare are targeted at laboratory animals. Pets exist in a regulatory grey zone between wild, farm and laboratory animals.

Cai Chunhong said proposals to regulate the pet market were submitted to the 2014 and 2015 Twin Sessions meetings but did not become law. The government said the issue is “not one China needs to solve urgently”.

This leaves animal protection mostly to civil society groups. Du Yufeng’s organisation, the Sichuan Guangyuan Bo’Ai Animal Protection Centre, is encouraging local governments to manage the pet market and rescue stray animals. And for a decade, ACTAsia has been running events with Vets for Compassion, offering training to vets and sterilising stray animals.

Cai Chunhong believes one realistic way to improve pet welfare is by promoting adoption. Animal rescue organisations do promote it, but China does not have any organisations dedicated to advocating adoption as an alternative to pet buying.